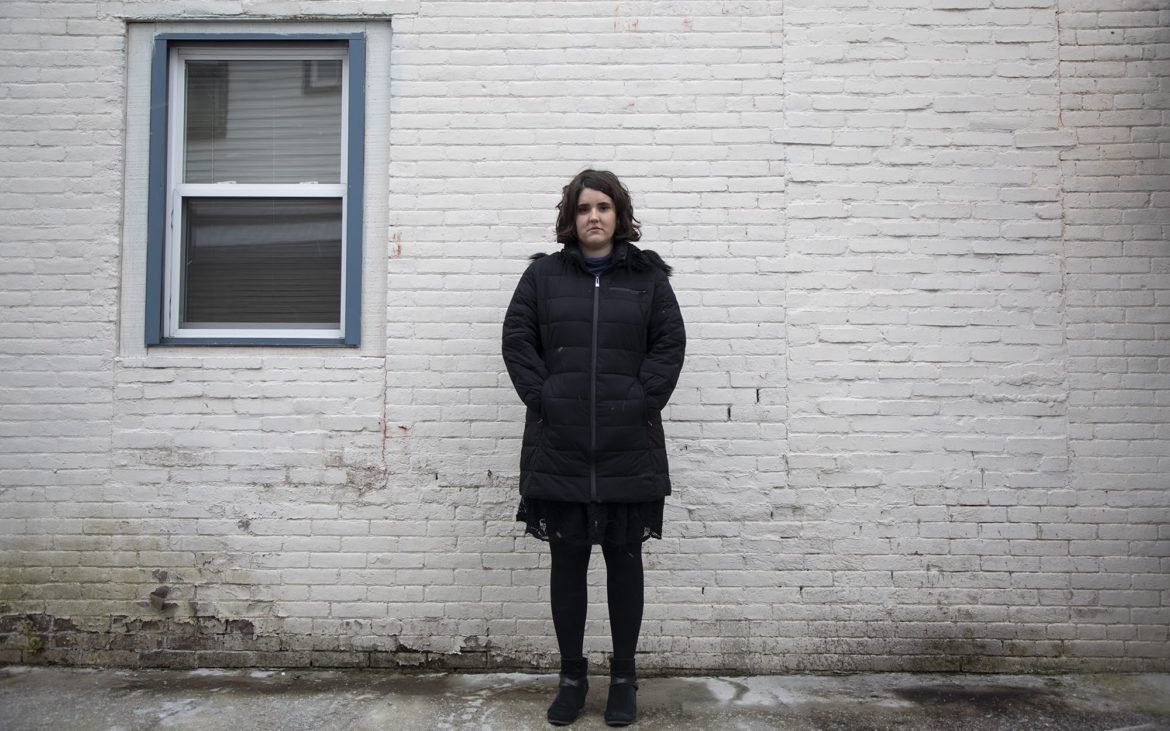 Making people, especially friends and family, “aware” of your mental illness is messy and uncomfortable. That’s not to say delivering news of any diagnosis is fun, but telling your friends you have cancer or diabetes is typically not met with, “Have you tried jogging, though," Cristina Holtzer writes. (Photo by Kat Procyk/PublicSource)

“We have a mental health problem in this country.”

“The focus now should be on mental health.”

“If you are struggling, you need to reach out for help.”

These platitudes flood the mainstream discussion on mental illness, an issue that affects more than 500,000 people in Pennsylvania and 43.8 million people in the United States.

To put in perspective how widespread mental health conditions are, consider this: About one in eight women in the United States will develop breast cancer during her lifetime. Mental illness will affect one in five Americans at some point during their lifetime.

And every October, we’re all reminded of breast cancer with Breast Cancer Awareness month. City buildings turn pink and NFL players bring out their colorful socks. But when was the last time your office courtyard turned their foundation a different color for depression? Bipolar disorder? Anxiety disorders? 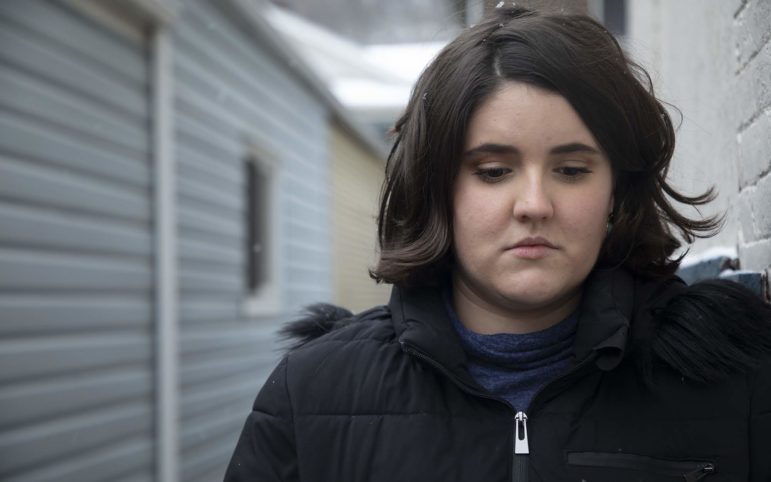 Cristina Holtzer started experiencing daily panic attacks in 2015. She called off from her new job and lied, saying it was from a stomach bug. (Photo by Kat Procyk/PublicSource)

Making people, especially friends and family, “aware” of your mental illness is messy and uncomfortable. That’s not to say delivering news of any diagnosis is fun, but telling your friends you have cancer or diabetes is typically not met with, “Have you tried jogging, though?”

For me, having an anxiety disorder means regularly feeling as though I’m about to deliver an immensely important speech to a room of thousands when, in fact, I’m sitting at my desk eating a banana.

It means not falling asleep for hours, sometimes not at all, because I can’t get my head to stop repeating the lyrics to a song I heard on the radio or thinking of all the things I need to accomplish the following day.

At its worst, it means going to the emergency room because I can’t breathe.

When I first started having problems with anxiety, I “reached out” out of absolute necessity. I had tried everything the internet advised to mitigate anxiety: eliminating caffeine, putting my phone away two hours before bedtime, creating a sleep routine, yoga, running, meditation — all of it. I still felt overwhelmingly nervous most of the day, every day. For no apparent reason.

In 2015, I started my first job out of college and was having daily panic attacks. At one point, I had not slept in three days.

At 22, I hadn’t found my own doctor yet, and I did not want to tell my family what was going on. I didn’t want to appear weak. I called off sick during my first two weeks at the new job — of course, I lied and said that I had a stomach bug — so that I could go to a walk-in UPMC clinic near my apartment and ask for help.

I went home that day with three prescriptions. One for a sleeping pill, one for a daily anti-anxiety medication and one for an “as needed” benzodiazepine.

After getting enough sleep to function semi-normally, I realized I was just starting to get a handle on my issues. I needed to figure out if the doctor I saw at the clinic was even covered under my insurance (so that I could continue to see her), find a therapist and find a way to talk to my family about what was going on.

Thankfully, my insurance had a relatively user-friendly online portal. Using the ID and group number on my insurance card, I created an online account and was able to research general practitioners in my area that were covered. In-network counselors and therapists appeared under the “behavioral health” tab. Many of those covered were either too far away or not accepting new patients.

I called her office and left a message. She called me back and asked me a few questions about why I was looking to come in, and I made my first appointment. It was both a huge relief and a new source of anxiety.

During my first appointment, I did most of the talking. As I told her about my life, Karin drew a type of family tree so that she could remember all of the people I kept making references to.

At the end of the session, I had to bring up one last uncomfortable question — how much money I owed. The information wasn’t listed anywhere online, and I didn’t want to wait to receive a bill with no idea as to how much it may be. Each visit was about $100, but my insurance covered 90 percent of that, so I only owed $10 per session. That was affordable to me, though Karin did make it clear that if it might not have been, other accommodations were available.

After leaving her office that first time, I still felt anxious but also hopeful that things weren’t always going to be this way.

I saw Karin every week for 18 months. She gave me words to remember when I felt the worst, validated some of my feelings and fears and taught me techniques to keep my anxiety under control.

After leaving her office that first time, I still felt anxious but also hopeful that things weren’t always going to be this way. 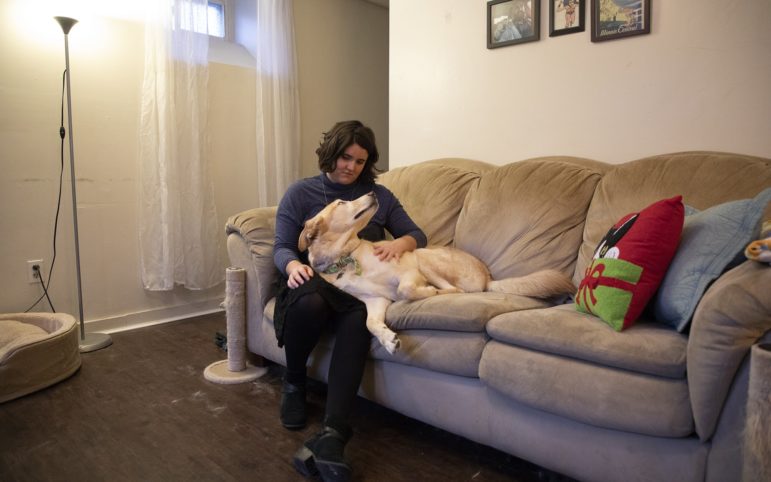 Cristina Holtzer with her dog in her Sharpsburg apartment. (Photo by Kat Procyk/PublicSource)

Almost four years later, I take a new medication and see a different therapist. Bad days come and go. But now that I have the tools to deal with the bad times, they are a little less scary than they might have been if I’d never done anything at all.

Trying to explain to people who don’t struggle with a mental illness what it is like is never going to be easy. But it shouldn’t have to be as hard as it is. As a society, country and city, when we say things like, “my door is open” or “you can always talk to me,” we need to mean it. Taking psychiatric medication and seeing a therapist doesn’t make me, or you, any less capable of living life.

As my current therapist says: “Think of your own mental health like a car. You take it in for an oil change every so often and get it inspected once a year. If the check engine light comes on, you get it checked out. And there’s absolutely nothing wrong with that.”

Cristina Holtzer is the social media coordinator for Pittsburgh Magazine. She can be reached at cristinaholtzer@gmail.com.