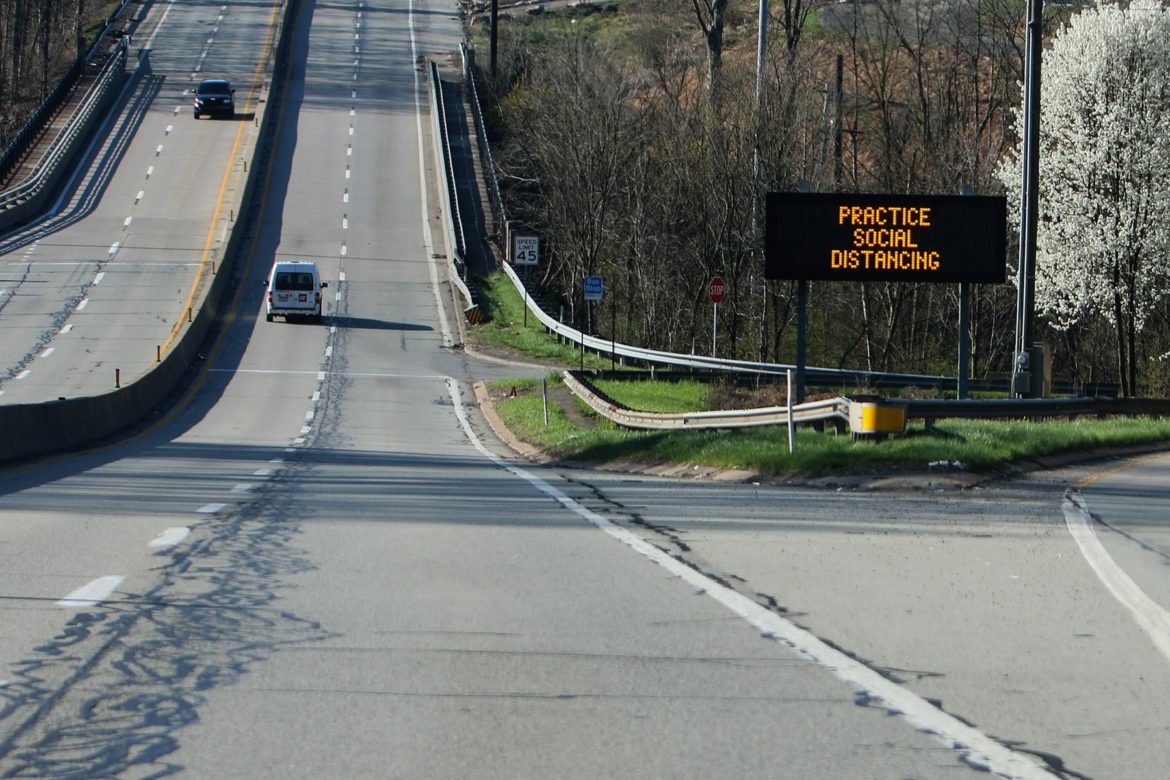 A sign along McKnight Road in the North Hills reminds people to practice social distancing to limit the spread of the coronavirus. (Photo by Kimberly Rowen/PublicSource)

For weeks, the public health advice has been clear: stay home if you can. Yet doing so may be easier for some people than others.

According to the data, the first day people in lower-income areas traveled more was March 17, the day Pennsylvania Gov. Tom Wolf called on all non-essential businesses in the state to close.

According to the New York Times, which analyzed Cuebiq data for metro areas across the country, the discrepancy between income levels in Pittsburgh is consistent with findings from other cities, including New York City and Boston. The data doesn’t capture all cellphone users, and it only shows the difference in movement between people in areas of differing income levels. It also doesn’t explain why residents were traveling. But amid social distancing, many experts and community leaders believe it may be because residents in low-income areas are traveling for food, to assist family and to get to jobs that can’t be done remotely.

“You can’t mop floors through Zoom or stock shelves on the internet,” wrote Pierce Robinson in an email to PublicSource. Robinson, who also works as the community affairs officer at the Urban Redevelopment Authority, was sharing his personal views about the inequities of social distancing.

Leslie Rose makes $14.80 an hour cleaning doctors’ offices in Oakland. She worries about being exposed to the virus when she’s at work. Rose, 62, has several health conditions that can increase the severity of COVID-19, including heart disease and high blood pressure.

Rose said she would stay home if she could. “But I got bills and I got to pay 'em,” she said.

Each day when she arrives home from work, she sprays the bottom of her shoes with Lysol, washes her hands and face and changes into clean clothes right away. She said she wishes workers like herself were given more protective equipment and higher wages. “I don’t mind taking the extra precautions to do what I need to do to stay safe, but don’t shortchange us and act like we’re not essential workers, too, because we are,” she said.

An analysis of federal labor data found that people in higher-paying jobs are more likely to be able to work from home, while the vast majority of low-paying jobs — including many now considered essential — require workers to be there in person, such as transportation and retail jobs.

Barbara Johnson, senior director of race and gender equity at the YWCA Greater Pittsburgh, said many essential workers are in a tough spot. “They have to go to those jobs, whether they want to or not. They don’t have a choice,” she said. “They’re putting their health at a greater risk because they’re working in places where they’re exposed.”

Food and family as factors in disparity

Shopping and food access also play a role in who is traveling farther, experts said. While people with means can get groceries and other essentials delivered, low-income people are more likely to have to travel to the store or a food bank, said Rick Stafford, a public policy professor at Carnegie Mellon University [CMU]. “Now, with the rich folks, you’re using the information highway. You’re using somebody else's car or the Amazon van to bring you what you need,” Stafford said.

Food banks have reported an overwhelming flood of demand. The Greater Pittsburgh Community Food Bank has reported that its pantries are ordering 30% to 40% more food. On March 30, hundreds of cars were lined up outside the food bank for hours awaiting their turn, making national news.

Another contributing factor to the difference in movement between people of different incomes could be proximity to family. Low-income people are much more likely to stay in the town where they grew up and live near family, said Kathryn Edwards, an associate economist at the RAND Corporation. That may mean people who have family nearby are traveling to relatives’ houses to drop off groceries, take care of an elderly family member or get help watching their kids so they can go to work.

Stafford of CMU said the movement data isn’t surprising. From the beginning, he said, it was clear that low-income people would be under greater pressure to continue earning a living during the pandemic. “[The data] does reflect, without question in my mind, the fact that this whole situation is much harder for low-income folks who in many cases have no choice but to move around,” Stafford said.

Because low-income people might not have cellphones or consistent service, Stafford noted that the data might not capture the full scope of the disparity. “If anything, it may not reflect the full effect,” he said.

Jasiri X, CEO of 1Hood Media, said he appreciates that low-wage workers are getting more recognition these days — but they should be paid accordingly and adequately protected.

“I love the narrative that who’s essential is being changed, and people are walking into their grocery stores with a little more respect,” he said. “But at the same time, a lot of those folks are not even making $15 an hour. And they’re being exposed.”

Khalil Brown has worked in food service at UPMC Presbyterian in Oakland for over a year. He takes public transportation to work and goes in and out of patients’ rooms each day to deliver meals. While he takes proper precautions and doesn’t interact with COVID-19 patients, Brown, 26, said he worries daily about bringing the virus home. He lives with his mother who has respiratory issues. “I know for a fact that if something were to be brought home and she gets sick, it could be fatal,” he said.

Even after a recent 31-cent raise to $15.84 per hour, Brown said he still can’t afford to live on his own. “We should be compensated appropriately for what we do. We have to leave our houses every day and we have to interact with the public every day. We may not know if they're carrying [COVID-19],” he said. “Money you can easily replace, but you can’t replace a life.”

Several lawmakers are working on legislation to increase pay for essential workers. On April 1, State Rep. Jake Wheatley, D-Hill District, announced his intent to introduce House Bill 2380, which would ensure all essential workers’ make $15 an hour. For those who already make $15 or more an hour, it would increase their hourly wage by $3.

And labor unions like 32BJ SEIU are fighting for higher wages and better worker protections to be included in the next federal bailout package.

State Rep. Summer Lee, D-Swissvale, said she and her colleagues received pushback last year when fighting for a $15 statewide minimum wage. The policy would have raised the incomes of many workers who are now on the front lines. “A lot of our counterparts were basically saying that these people don’t deserve that money, that if they want a living wage they should work different jobs,” she said during a virtual town hall hosted by 1Hood Media and the UrbanKind Institute on April 14. “But now, those are the people working.”

Robinson stressed the importance of establishing protections for low-wage workers.

“If they don’t go outside to work, their world comes to a halt. They can’t quit because they wouldn’t qualify for unemployment, even though they are putting their health at risk every day they step out the door,” Robinson said. “So, what are they to do? It doesn’t seem like we are thinking about this enough.”

The marketing intelligence firm Cuebiq collected anonymous first-party data from mobile devices of users who opt-in to location data services. Using median household income data from the U.S. Census Bureau American Community Survey 2013-2017 5-year estimates, the firm analyzed the difference in movement between U.S. Census block groups with median household incomes in the lowest 10% in the Pittsburgh region and block groups with the highest 10% of median household incomes in the Pittsburgh region. To define the Pittsburgh region, Cuebiq uses the U.S. Census Bureau core-based statistical area for Pittsburgh. To measure how far a cellphone has traveled, Cuebiq took the farthest points where a person stops in each direction, draws a rectangle around those points and measures the distance of the diagonal. The analysis does not explain why residents move, nor does it capture all cellphone users.