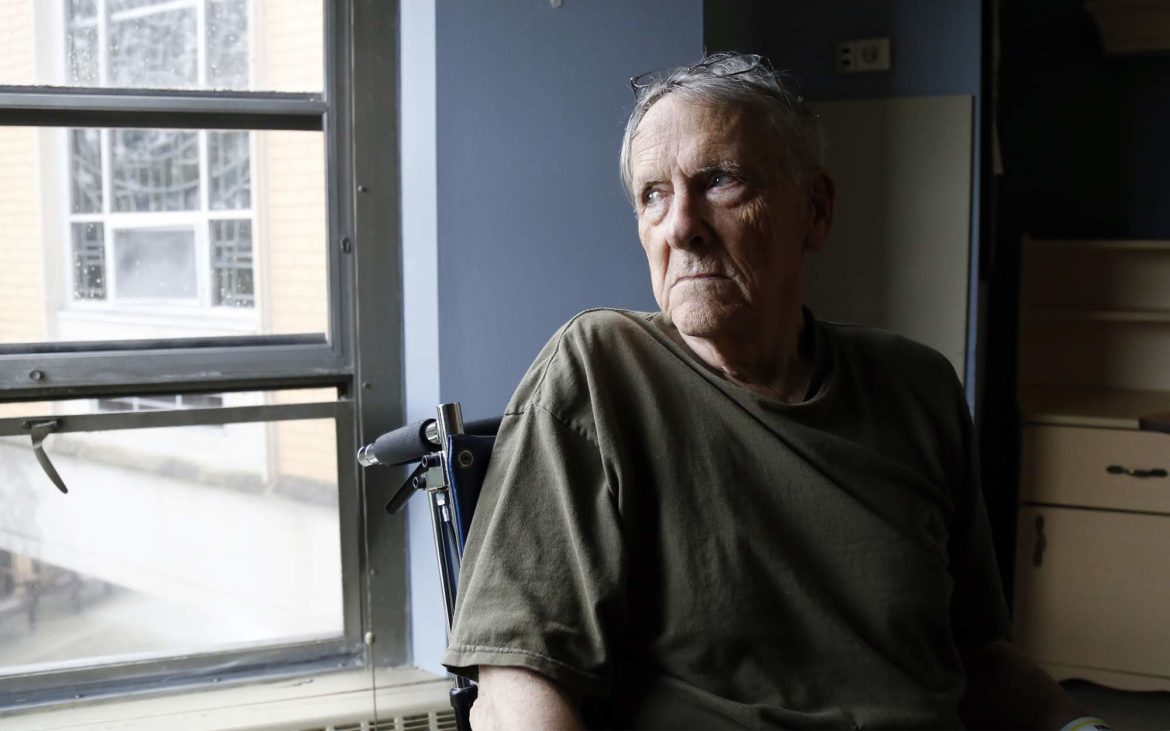 Since receiving a 120-day notice of lease termination in January, Ed Corbett has been seeking help from social service providers and politicians, hoping someone can help him and his neighbors stay in Bloomfield. Corbett, 81, is temporarily staying at the Vincentian de Marillac nursing home for health reasons. (Photo by Ryan Loew/PublicSource)

Six years ago, Ed Corbett found his Bloomfield apartment while walking through the business district on Liberty Avenue. Hanging above a bookstore, a “Room for Rent” sign advertised the one-room efficiency apartment he now calls home.

It was inexpensive at just $340 a month. Rent has risen $30 since. But now, he can’t stay.
Under new ownership, the 16-unit dormitory-style apartments at the corner of Liberty Avenue and Edmond Street are being remodeled, and Corbett and his neighbors were told to be out by May 31, according to lease termination notices sent in January. He’s upset, not only because he has to move but also because the move means he and other residents — many who are elderly or have disabilities — may no longer be able to afford living in Bloomfield at all.

“It disrupts their life,” Corbett, 81, said of the impact the lease termination has had on his neighbors. “It burns me up.”

After receiving the 120-day termination notice, Corbett sought help from officials and advocates in the area, including Democratic state Rep. Sara Innamorato and Christina Howell, executive director of the Bloomfield Development Corporation.

The property is now owned by Pele Liberty LLC, a company started in July 2018 by Jeff Sorbara, who co-owns Mindful Brewing Company in Castle Shannon with Dustin Jones. Howell and Innamorato spoke highly of the new owner’s willingness to discuss concerns about the property.

On April 26, Howell and a colleague met with Jones to talk about the property’s future and efforts to relocate residents. Also in attendance were Pittsburgh City Councilwoman Deb Gross and her chief of staff and a representative from Innamorato’s office.

“We were very pleasantly surprised," Howell said of the meeting with Jones, who is listed on the termination letter as building management. "He personally worked to place all but three or four gentlemen left."

According to Howell, Jones explained to the meeting attendees that they'd helped several residents find new housing in their price range, and they also discussed including affordable housing units after the building is renovated.

Jones responded via email to a request from PublicSource seeking comment but did not elaborate on the Friday meeting. In his April 28 email, he said that he and Sorbara are “still trying to figure out what we are doing with the space,” which includes the apartments as well as a vacant storefront, located next to their other tenant, White Whale Bookstore.

Corbett is still not happy. He said he was unaware that help had been available (including an offer from Jones to pay for a moving truck) and felt the termination letter made it clear they didn’t want anything to do with the residents. The letter does include an offer to act as a reference for new housing but makes no mention of help with relocation.

“Everybody is besides themselves. They don’t know what to do,” said Johnson, who said he’d lived there for three years. “Everyone here will be displaced out of Bloomfield.”

The issue is about more than what happens at the property. It’s about affordability in Bloomfield. Howell said she’s met many area residents who fear rising rents will send them out of the neighborhood — an issue threatening other East End neighborhoods like East Liberty and Lawrenceville.

For community groups, residents and business owners, the question is how to strike a balance between new growth and preserving economic diversity in the neighborhood.

“With the tools that are available right now,” Howell said, “how do we preserve affordable housing?”

The lease termination and planned renovation follows the death of the building’s previous owner, Mark Diulus, who Corbett called “a dandy guy.”

According to his obituary, Diulus owned several businesses in Pittsburgh, including an electric company and restaurant. Diulus, who bought the building in 2002 for $300,000, died in January 2018.

In July, his family sold it to Pele Liberty LLC for $875,000, according to county property records. The Diulus family declined to comment on the sale. 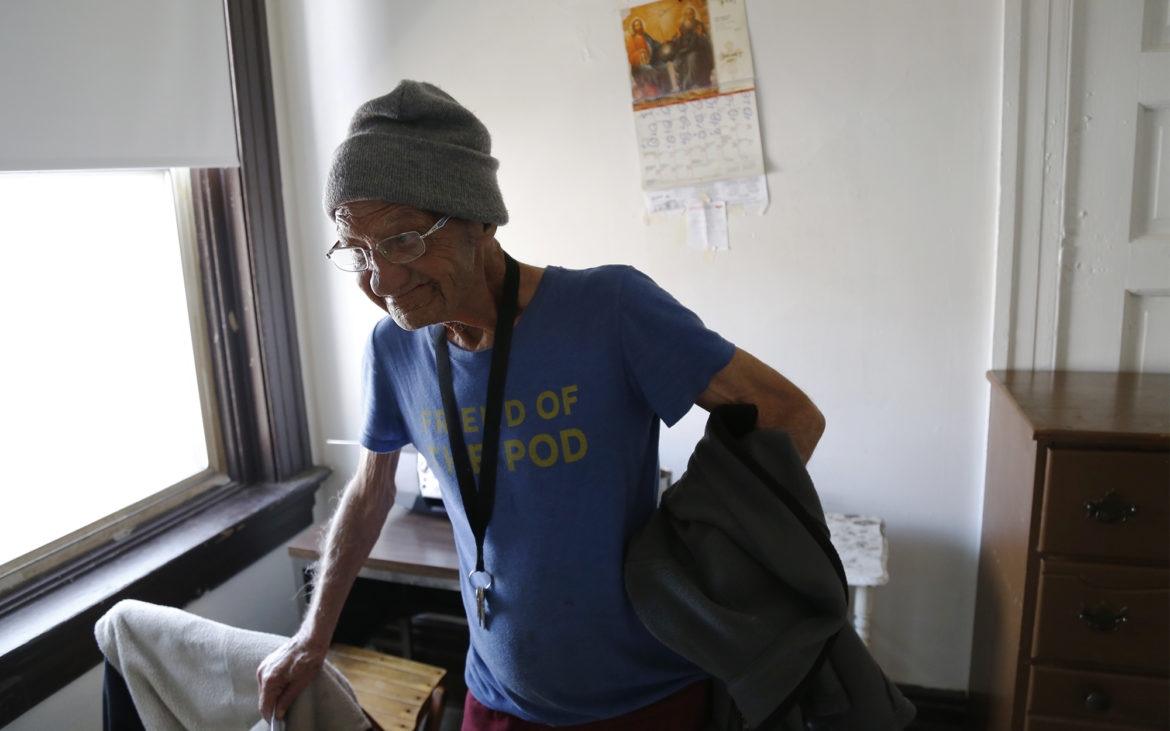 Resident Bobby Hotchkiss said he had been paying $315 per month in rent. With the help of a caseworker, he said he was put on the waiting list for an affordable housing complex Downtown. (Photo by Ryan Loew/PublicSource)

Ben Forman owns the two storefronts next to the building. He used to run Joan’s Hallmark Shop in the space but closed the business in March and is now looking to sell. He said he has a conflicted view of the planned renovation.

“I think it’s nice because it’s going to upgrade the area,” he said, noting he doesn’t believe the current apartments were well-maintained. But Forman also expressed dismay that some of the residents had not yet been able to find new housing.

Forman said he feels Bloomfield has “been left behind” compared to Lawrenceville and East Liberty, despite many years of improvement efforts. Those neighborhoods have seen significant investment in recent years and, according to Forman, “have been turned around.”

He wants more investment in Bloomfield. But he recognizes that will “affect some people negatively,” especially low-income residents and seniors. 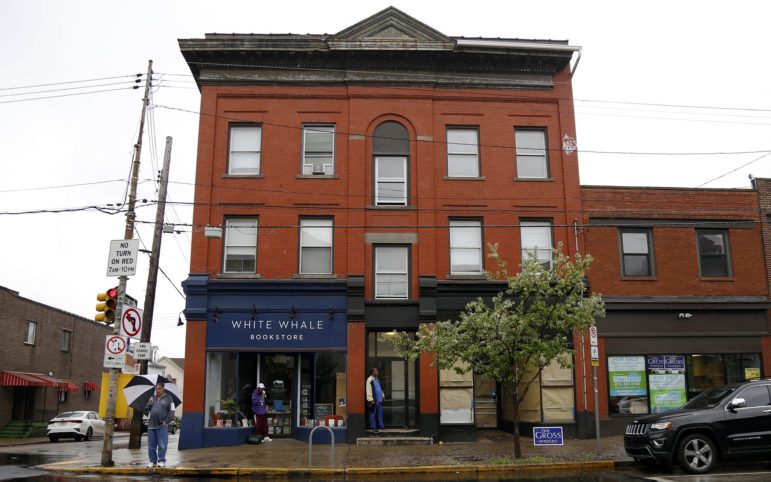 Nancy Murray, president of The Arc of Greater Pittsburgh at ACHIEVA, a disability advocacy organization, said finding affordable housing can be particularly difficult for people with disabilities.

Searching for an apartment can be overwhelming for individuals with intellectual disabilities, and Murray said buildings that are accessible for people with physical disabilities are in short supply.

Howell said she found Jones’ efforts to help residents to be impressive and lauded the apparent willingness to consider including some affordable housing at the site when work is completed.

Bobby Hotchkiss and Bob Walsh, both residents of the apartments, told PublicSource reporters who visited the building in mid-April that the new ownership at that point was “not helping at all” with relocation. Walsh has lived in the building since 2005 and said he planned to move to Somerset, about a 70-mile drive from Pittsburgh. Hotchkiss, 65, said he had been paying $315 per month in rent. With the help of a caseworker, he said he was put on the waiting list at Wood Street Commons, an affordable housing complex Downtown.

Innamorato, who represents Bloomfield, said in mid-April that the building’s new owner had “been very responsive, very willing to meet” about concerns raised about negative impacts on residents. "He purchased the property because he liked the storefront and never thought about being the landlord of affordable housing units, so part of it is, can we provide the resources for him, as the new owner, to be a supportive and successful landlord?” Innamorato said.

Corbett said on April 27 that he spoke with Jones a few days earlier about his rent and said that he offered to help with the upcoming move.

But Corbett said he was not offered assistance finding a new place and was not told that a moving truck could be provided.

He said he knew displacement had been an issue for years but didn’t expect to feel it personally.

“I’ve heard these stories in newspapers, through the years, of people losing their homes,” Corbett said. “And it didn’t mean that much to me because it didn’t involve me.”

As the neighborhood draws interest from developers, and residents like Corbett fear they can’t afford to stay, Innamorato is hopeful residents, community organizations and developers can find common ground.

“Our dream, and the community’s dream,” she said, “is the preservation of affordable housing to make sure these folks who have lived in Bloomfield for the majority of their life continue living in Bloomfield.”

Erin West is an editorial intern for PublicSource. She can be reached at erin@publicsource.org.