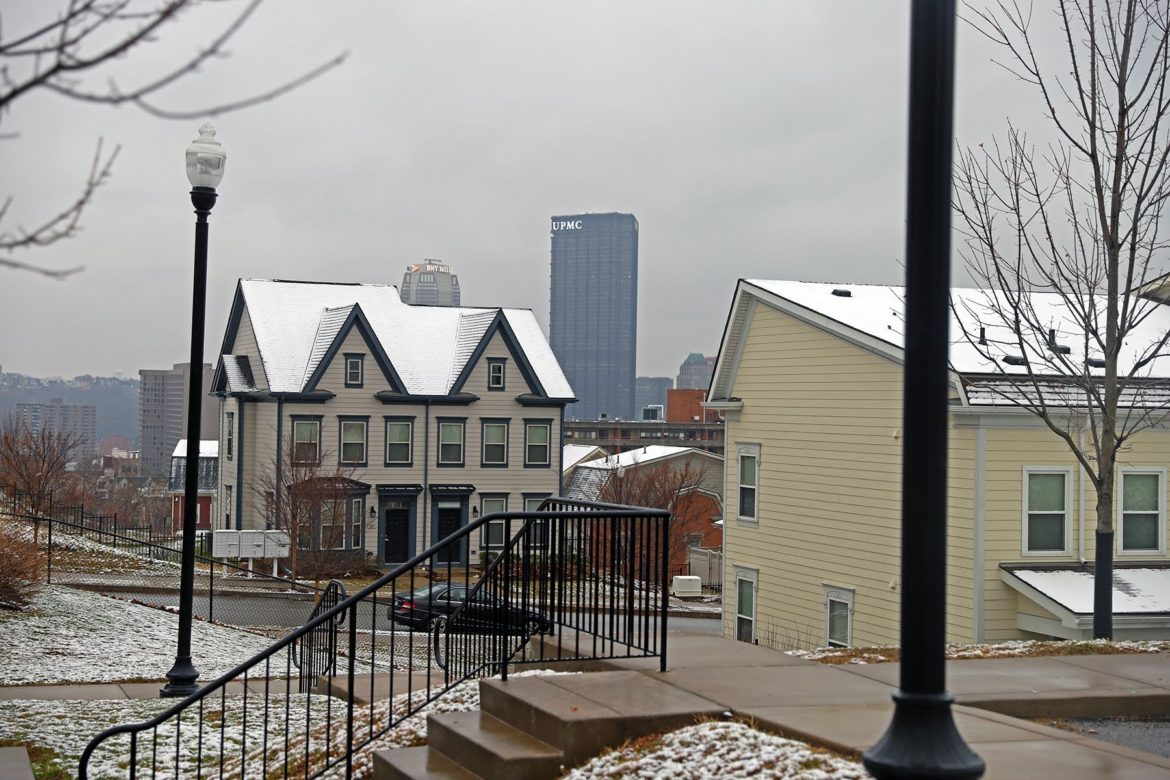 Skyline Terrace, a mixed-income housing complex developed by the Housing Authority of the City of Pittsburgh. (Photo by Jay Manning/PublicSource)

Since 2011, the Pittsburgh housing authority has spent $58 million from its Section 8 housing voucher program on the construction of mixed-income housing developments.

Those developments — such as Garfield Commons, Skyline Terrace in the Hill District and Cornerstone Village in Larimer — include market-rate and affordable units and are part of the authority’s long-term strategy to revitalize neighborhoods and stem the loss of affordable housing.

But is construction coming at the expense of the agency’s hobbled Section 8 voucher program?

As of Oct. 31, 8,684 families were waiting for housing vouchers. The Housing Authority of the City of Pittsburgh [HACP] isn’t accepting new families on the waitlist and acknowledges that most families issued new vouchers won’t find a place to live.

“The bottom line is we cannot serve the residents of the city of Pittsburgh with Section 8 vouchers,” Binion said. “We have to build our own.”

But some housing advocates bristle at the HACP’s use of Section 8 voucher money as a funding stream.

Paul O’Hanlon, an attorney and affordable housing advocate, said the new mixed-income developments may be serving a worthy purpose, “but it’s sort of like we’re doing it on the backs of the poor. I find it kind of outrageous.”

HACP’s development strategy introduces a critical choice of whether it’s more important to give immediate aid to families who may otherwise not find stable housing or whether voucher funds are best spent on new construction to reduce the shortage.

It also sheds light on HACP’s broad leeway to redirect federal tax money. In 2001, HACP became part of a federal program called “Moving to Work,” an initiative that includes 39 authorities across the country. The goal is to reduce barriers for housing authorities to try innovative programs. In practice, it means that federal money earmarked for one use — like Section 8 vouchers — can be shifted to other uses, and it can be stockpiled year to year. HACP has a total budget of $176 million for the 2019 fiscal year.

Will Fischer, a senior policy analyst at the Center for Budget and Policy Priorities, pointed out that Pittsburgh’s diversion isn’t unique. In 2015 alone, Moving to Work [MTW] agencies diverted roughly $600 million in voucher funds — enough to support 68,000 families.

But he described Pittsburgh as “pretty consistently one of the most aggressive agencies about diverting funds.”

Has the strategy worked?

Housing authority officials say funding new construction is a way to undo the harms of 20th-century housing policy, which frequently resulted in segregation of poor communities.

“I believe that whenever you build projects of concentrated poverty they’re doomed to fail, both for those families and for the communities,” said Rev. Ricky Burgess, a HACP board member and a Pittsburgh City Council member. 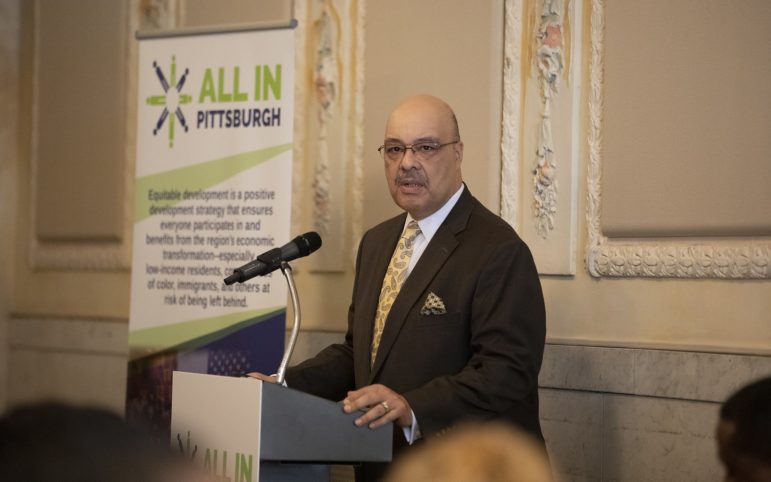 Rev. Ricky Burgess, a Pittsburgh city councilman and board member for the Housing Authority of the City of Pittsburgh. (Photo by Kat Procyk/PublicSource)

Housing officials describe the new developments as high quality and bringing investment to communities in need.

But HACP is serving fewer families than a decade ago. Today, HACP has 2,500 public housing units, compared to 4,000 units in 2009. Throughout the 2000s, HACP was in the midst of tearing down public housing, including St. Clair Village, which included 680 units at is peak, and Garfield Heights, which included 326 units.

HACP is replacing some of the lost housing, and since 2011, its development strategy has created roughly 1,200 affordable units, including a mix of public housing, units reserved for Section 8 vouchers and other affordable units funded with tax credits. The construction also includes 364 market-rate units. Development is bolstered by funding such as a $30 million federal grant that helped fund new housing in Larimer and East Liberty.

For the future, HACP has committed funding to seven other development projects. These are expected to include 249 units reserved for families using Section 8 vouchers, 84 other affordable units and 161 market-rate units.

The new affordable units haven’t made up for the loss of public housing units in demolished complexes. For instance, the demolished Addison Terrace in the Hill District included 734 public housing units, compared to 311 replacement units designated for voucher holders and another 75 units rented at market rate. The 326 public units torn down at Garfield Heights have been replaced with 137 units of public housing, 49 additional affordable units and 39 market-rate units. 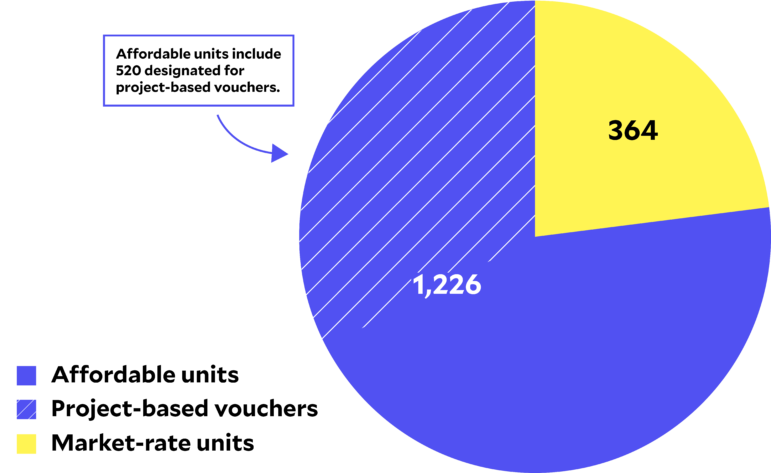 Source: Housing Authority of the City of Pittsburgh. Figures provided by authority as of November 2019. (Graphic by Remy Davison/PublicSource)

Meanwhile, only one in four families issued a voucher will find a place to live, according to the housing authority’s latest figures. As of Dec. 2, the authority has 5,750 active vouchers, though the federal government has authorized funding for more than 7,300 vouchers.

But O’Hanlon questions whether HACP is doing enough to improve its Section 8 program, which he’s criticized as floundering for years.

“It’s a much-needed resource in the city when we’re losing affordable housing so quickly,” she said.

The housing authority views both Section 8 and new development as important tools to increase affordable housing.

HACP board member Peter Kaplan said, despite struggles with Section 8, the development strategy is not a detriment to the voucher program.

“We’ve been working on both simultaneously,” Kaplan said. “It’s a multifaceted strategy and, frankly, mixed-income housing is something that is successful. It works for neighborhoods, it works for all the tenants, and it is something — it makes sense.”

“Ten years ago, we didn’t have any problem with Section 8,” he said. But then Pittsburgh started drawing new people and investment, Binion said, “and when the city started moving, other people came in, and the occupancy rate started going up, and that created challenges for the city of Pittsburgh.”

Pittsburgh’s Affordable Housing Task Force found that the city in 2014 had a deficit of 17,000 affordable rental units for families making around $20,000. Locally, the average income for families with an active voucher is currently $13,232.

In Burgess’ view, landlords are the problem. “The real issue is we need to pull down the barriers that discriminates from people who have vouchers,” he said.

In 2015, city council passed an ordinance that would force landlords to accept vouchers, but the Apartment Association of Metropolitan Pittsburgh challenged it. In September, the state Supreme Court kicked the case back back to the Commonwealth Court for reconsideration.

The federal government does not track voucher success rates nationwide, though individual housing agencies track their own numbers. Families typically have four months to find a place to live, though the housing authority said extensions are often granted, typically for 30 days.

Deborah Thrope, supervising attorney of the National Housing Law Project in San Francisco, narrowed in on the fact that one in four Pittsburgh families issued a voucher finds a place to live.

“It’s low and it’s shameful to see that the housing authority is not utilizing the voucher to the extent they’re authorized,” Thrope said.

In 2016, Congress doubled down on the MTW initiative, by opening it to an additional 100 public housing agencies in the future. In 2017, HUD proposed a rule requiring new MTW agencies to spend at least 90% of voucher funds on vouchers, though HUD removed the stipulation in an October 2018 proposal.

HACP’s spending of Section 8 funds on development varies by year, including money that can be saved from prior years. According to independent audits from 2015 through 2017, Pittsburgh received $145 million in federal grants for its voucher program and spent about 87% of it — $126 million — on the voucher program. 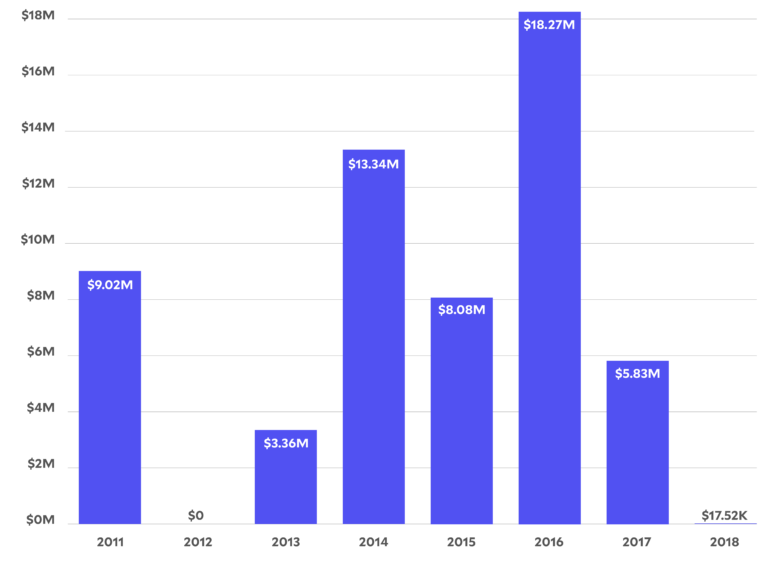 Spending on development for each year can include money saved from previous years. Source: Housing Authority of the City of Pittsburgh. (Graphic by Remy Davison/PublicSource)

Thrope acknowledged that MTW guidelines allow agencies to shift funding. But, she noted, the federal rules require housing agencies to serve “substantially the same” number of people as they otherwise would. A recent report from the U.S. Government Accountability Office found that the 39 original MTW agencies served fewer households on average at a higher cost than other housing agencies.

“So yes, you can move around funds, but it shouldn't be to the detriment of folks on waiting lists for vouchers, for housing,” Thrope said.

Pittsburgh’s struggles aren’t unique. But housing authorities across the country have come up with a number of  strategies aimed at getting more families into voucher-subsidized housing. Among the strategies are landlord recruitment programs and counseling for families about the voucher process. HACP has made similar efforts, like a “Meet and Lease” tenant recruitment event with voucher-friendly landlords.

Kaplan said families have also been able to utilize “housing navigators” from the Allegheny County Department of Human Services.

To encourage more landlords to accept housing vouchers, HACP in September introduced a policy to increase payments to landlords in high-rent neighborhoods, including Downtown, the Strip District, Lower Lawrenceville, Squirrel Hill, South Side Flats and Shadyside.

Binion said the new initiative could cut down on funds available to go to development.

Criticism of the housing authority’s increased involvement in mixed-income developments comes down to a philosophical difference, Burgess said.

Carl Redwood, board chair of the Hill District Consensus Group, has long warned that rising rents are forcing low-income residents to leave the city.

In Binion’s view, HACP is using “everything in its toolbox” to increase affordable housing in Pittsburgh. Moving ahead with new construction, he said HACP doesn’t have an end goal in mind for how many new units it will finance.

“I look at the process and whatever’s produced out of the process is going to be the number,” Binion said.

He said he believes HACP’s emphasis on mixed-income development is improving families’ lives. In his view, it’s a bold strategy that will have the long-term result of giving low-income residents a home in the city.