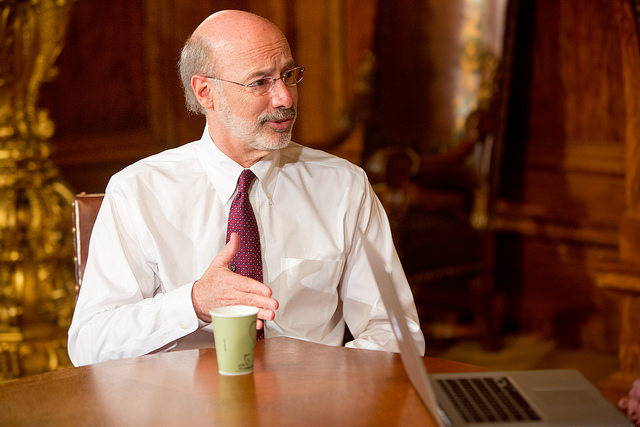 After a statewide tour and a trip to the White House, Pennsylvania Gov. Tom Wolf is turning to social media to address the state’s growing opioid crisis.

Wolf is holding a “Facebook Town Hall” at 4 p.m. today, where he will field questions from the public. The governor will communicate with the audience via Facebook Live, a live-streaming service that broadcasts video and integrates comments simultaneously.

Wolf has used social media before to talk with constituents about a variety of topics. The governor turned to Twitter during his first month in office to take questions about his planned initiatives, and last year Wolf live-streamed a conference to outline his budget proposal to Facebook users.

Tennis recently spoke with PublicSource about shortages in funding and staffing at the DDAP, the agency whose mission is most directly tied to fighting the heroin crisis. Its responsibilities include coordinating drug policy across the government, overseeing drug treatment funding, mitigating the economic costs of addiction and raising awareness of a growing epidemic.

You can see here how Pennsylvania responded to rising drug deaths from heroin and opioid overdoses with stagnant funds.

Wolf has toured the state speaking about the opioid crisis since March, making 23 stops in total. In February, Wolf held a roundtable discussion alongside Massachusetts Gov. Charlie Baker at the White House to discuss how states can effectively battle the heroin and opioid crisis.

According to the Centers for Disease Control and Prevention’s (CDC) website, opioids are “the main drivers of overdose deaths.” In 2014, 2,732 people in Pennsylvania died of drug overdoses, more than twice as many who were killed in automobile accidents. Nationwide, opioids were involved in more than 28,000 deaths in 2014, and the CDC reports that opioid overdoses have quadrupled since 2000.

As well, the CDC recently named three counties in Pennsylvania that are at risk for HIV and hepatitis C outbreaks among drug users, partially due to high numbers of injection-drug users.

This has led some lawmakers to address the pharmaceutical industry directly. Pennsylvania state Rep. Thomas Caltagirone penned a House memo last week that called on Wolf and Pennsylvania’s Office of the Attorney General to file civil lawsuits against negligent pharmaceutical companies.

Caltagirone wrote in the memo:

Certain pharmaceutical companies mislead the public about the addictiveness of the powerful prescription opioid drugs and are engaged in fraud, conspiracy and negligence in the development and marketing of these drugs. … These pharmaceutical companies knew that prolonged use of opioids were addictive and subject to abuse but they put profits above all. These tactics resulted in billions of dollars in profits for these companies, to the tune of $8 billion in 2012 and projected profits of $15.3 billion this year.

Last Monday, Wolf applauded police officers around the state for hitting a milestone of 1,000 overdoses reversed by the drug naloxone. The drug is a nasal spray that counteracts a heroin or opioid overdose before vital organs shut down.

Pittsburgh police recently began to carry naloxone, though some other police departments across the state have used it for more than a year. There are still several police departments in Western Pennsylvania that haven’t equipped their officers with naloxone, citing that medics arrive at a scene either before officers do or soon after.

“Naloxone is not the solution to everything, but it’s the start,” Wolf said at the event last week. “We’ve saved 1,000 lives with naloxone. That’s 1,000 people [for whom] we’ve had the possibility of getting a cure, and addressing the fundamental problems they suffer from.”

Anyone who is interested in participating in Wolf’s Facebook Town Hall event can do so by following the stream live on the governor’s Facebook page. Questions are being taken in the comments section up until 4 p.m.