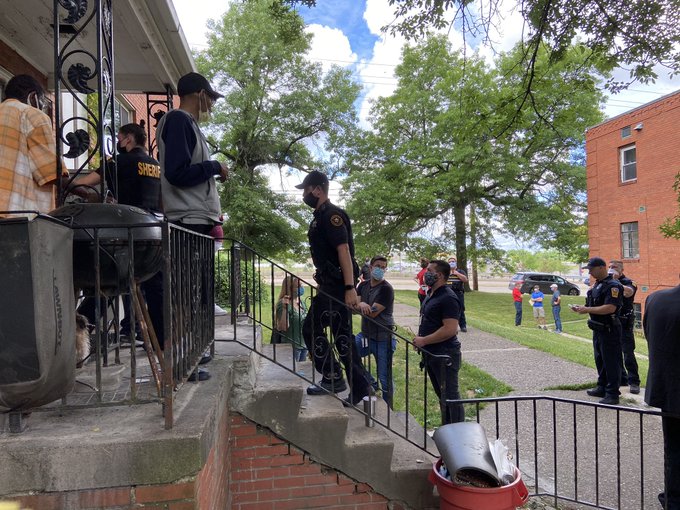 Police in Penn Hills enter the last occupied building in Valmar Gardens, asking residents to leave, on June 19, 2020. The residents were eventually given more time to prepare to move, but were later ejected. (Photo by Rich Lord/PublicSource)

Update (9/4/20): Allegheny County President Judge Kim Berkeley Clark issued an order instructing district judges on the handling of eviction filings in the wake of an order issued by the Centers for Disease Control and Prevention. If a landlord attempts to file an eviction against a tenant who has declared that he or she falls under the income limits and income loss guidelines in the CDC order, the judge may hold an initial status conference to “give the parties an opportunity to also consider available rental assistance,” according to Clark’s order. Other than that, the judge is instructed to stay the case until the expiration of the CDC order, set for Dec. 31. In such cases, judges are not to issue writs or orders of possession — which tell the tenant to get out or be removed by a sheriff — until after the CDC order expires.

More eviction cases were filed on Tuesday than in the prior two months combined, as landlords took advantage of a gap between various pandemic-driven limits on those court actions.

The 181 new eviction filings — coming amid various decisions by the state, the Allegheny County courts and the federal Centers for Disease Control and Prevention — may be a hint of things to come. They also raise questions about how such actions will be processed by courts in the midst of an ongoing pandemic and a fluid regulatory situation.

"I think it is confirmation of all of our worst fears during this pandemic: That the floodgates were going to open as soon as a moratorium ended, and we are going to see more evictions than we ever saw before,” said Megan Stanley, director of the Pittsburgh Commission on Human Relations, and a member of an informal working group of civic leaders that has been trying to reduce evictions.

The 181 eviction cases, tallied by Carnegie Mellon University's Community Robotics, Education and Technology Empowerment [CREATE] Lab, include concentrations of more than 10 in the McKees Rocks area, the Clairton area, Penn Hills, the Coraopolis area, and the City of Pittsburgh’s western and northern neighborhoods.

News of the disparate impact of evictions elsewhere in the country has people who fight homelessness “quite worried about the potential of there being an increase in the number of older women of color, and people in general being evicted because of COVID,” said Brian Matous, homeless services supervisor for shelters, street outreach and the day program at Pittsburgh Mercy’s Operation Safety Net.

Operation Safety Net has faced challenges placing people booted from Valmar Gardens in Penn Hills, he said, and is worried about facing “an influx of people. … The shelter system is pretty full."

There were 13,105 eviction cases filed in Allegheny County in 2019, according to CREATE Lab. That’s fewer than 60 per business day. Similarly, in the first three months of this year, before the pandemic drove the institution of moratoriums, there were 2,977 eviction filings.

Starting in mid-March, in response to the coronavirus, the state placed a series of moratoriums on evictions related to inability to pay rent, which lasted through August 31. Eventually lease violations unrelated to rent payment were permitted, and there were 228 such filings from April through August.

Gov. Tom Wolf claimed that he did not have the legal authority to further extend the state moratorium without General Assembly approval, so it expired Monday.

Tuesday’s 181 evictions include 20 filed by a single landlord, Arbors Management Inc. Arbors, on its website, calls itself "a premier property management company in Pittsburgh and Western Pennsylvania," with more than 100 employees. It advertises properties throughout Allegheny County and nearby counties. Arbors did not respond to calls or an interview request placed through its online contact form.

At least four other landlords in the county filed five or more evictions, each, on Tuesday, while other filed smaller numbers of cases.

Late Tuesday, the CDC said that individuals earning less than $99,000 or couples earning less than $198,000, who can't pay rent due to loss of income and are pursuing government assistance, can't be evicted through the end of this year. The federal agency justified the order as a means of reducing the spread of COVID-19.

Before it takes effect, the CDC order must be published in the Federal Register, the journal of U.S. government actions. The order says that it will be published on Friday.

Robert Damewood, staff attorney in Pittsburgh for the nonprofit law firm Regional Housing Legal Services, which represents nonprofit landlords, said he would advise his clients not to file evictions this week. “[A]ll that does is cost the landlord money, because you file the case and pay the [filing fee], but then you can't move the case forward” because of the CDC order, he said.

He added that the CDC order allows evictions based on criminal activity on the premises, tenant actions that threaten the health and safety of other residents, damage to property, and violations of health and safety codes and other contractual obligations.

1% of applications to the county accepted so far

Tuesday’s eviction surge comes as Allegheny County and Pittsburgh development departments deal with a crush of applications for housing help.

The Allegheny County CARES Rent Relief Program can provide as much as $1,700 a month in assistance to cover rent and other household costs for qualifying households.

But it only received its first infusion of funds in late July, and it has, to date, approved fewer than 1% of applications.

According to county Development Director Lance Chimka, the program received a total of 5,718 applications — most from tenants, but some from landlords — of which it approved 54 and made payments on 34 of those, by Wednesday afternoon. It has not rejected any applications.

Asked about the challenges of implementation, Chimka wrote in an email: "incomplete applications" and "income documentation requirements” slow the process.

The Urban Redevelopment Authority, which works only within the City of Pittsburgh, has, since mid-March, received more than 1,300 applications to its longstanding Housing Stabilization Program. That program provides funding of as much as $3,000, over three months, to help renters or homeowners facing temporary housing crises. The URA has approved 370 of those applications, with another 460 in process. It has rejected 516, mostly because the applicants live outside of the city.

Stanley said the county and its rental help contractor, ACTION-Housing, deserve “a lot of credit” for setting up a comprehensive new program on the fly, while rules for spending the federal Coronavirus Aid, Relief and Economic Security [CARES] Act funds were evolving. She is worried, though, about whether the $25 million the county has allocated to rental assistance will be enough to cover the needs of the applicants.

As a result of the working group’s efforts, there are now mediators available to work out disputes between landlords and tenants before they result in evictions. The group is still working on creating a single point of contact for people with housing needs, advocating for the right to counsel at eviction hearings, and pushing changes in state law, like the sealing or expungement of some landlord-tenant cases.

“I think everyone realizes [that the CDC order] is likely to be the last moratorium,” she said, adding that it gives civic leaders time to craft long-term solutions.

She hopes part of the solution is clear communication to landlords and tenants about "how to work with each other harmoniously over the next four months. … So hopefully, come Jan. 1, we don't have another 180 eviction filings."