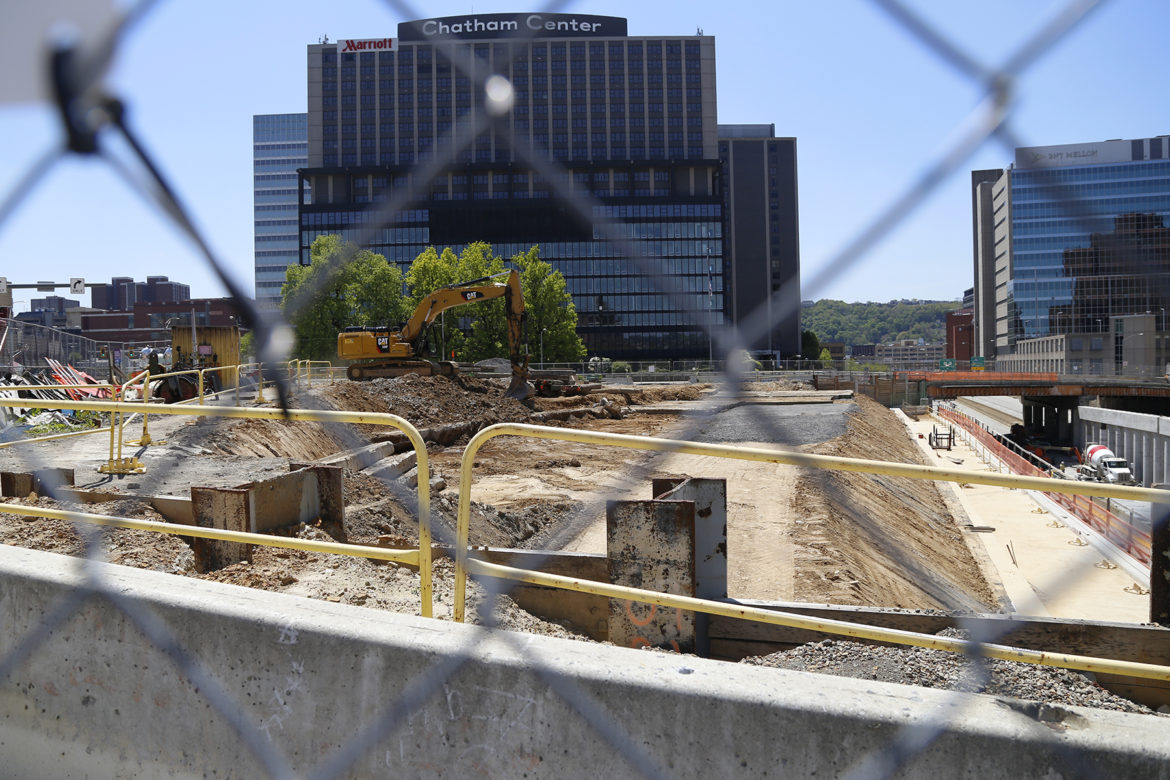 A view of part of the former Civic Arena site, which was slated for redevelopment led by the Pittsburgh Penguins — until the team announced Thursday that it was ceasing Lower Hill development. (Photo by Ryan Loew/PublicSource)

Update (5/20/20): Pittsburgh Mayor Bill Peduto urged the Urban Redevelopment Authority board to approve the Penguins' proposed developer and tentative plan to build an office tower in the Lower Hill District, in advance of a URA board vote scheduled for Thursday. He called the potential First National Bank office tower "an extraordinary $200 million investment in the heart of Pittsburgh that will help brace our local economy in a time of great need," which would also result in an $11 million investment in housing and development in the Hill District.

Pittsburgh’s Urban Redevelopment Authority board is planning to move forward with a vote Thursday on proposed terms for construction of a Hill District office tower and parking garage by the Penguins, despite the hockey organization’s announcement yesterday that it is ceasing development operations on the former Civic Arena site.

"We're moving forward to get this done in the coming days,” said city Chief of Staff Dan Gilman on Friday morning. “We believe this is a project that is still critical to get done and can and should be a win for the neighborhood, the city and the Penguins."

Gilman's boss, Mayor Bill Peduto, appoints the URA board, which late Friday announced a virtual special meeting for May 21 at 2 p.m., to discuss Lower Hill development.

On May 14, the URA board opted to delay, by as much as two weeks, a vote to approve the Penguins’ choice of developer Buccini/Pollin Group and the plan to build a 26-story office tower anchored by First National Bank’s [FNB] headquarters. Board members said they had received relevant documents as late as Thursday morning and that the authority needed time to make sure they adequately reflected commitments to dedicate $11 million in revenue from the project to development throughout the Lower Hill, Middle Hill and Upper Hill.

The Penguins responded promptly Thursday with a statement from team President and CEO David Morehouse characterizing the failure to vote as “apparent lack of support from the URA,” and alleging “constantly changing demands and delays” that made “delivery increasingly impossible.” The statement also noted “the current economic conditions” — an apparent nod to the coronavirus-related economic slump.

FNB’s stock closed last year at $12.70 per share, but ended Thursday at $6.45 per share. FNB spokesperson Jennifer Reel did not return calls from PublicSource placed on Tuesday, Thursday and Friday. PublicSource emailed FNB President and CEO Vincent Delie and his Executive Assistant Joyce Arnold Friday, asking whether economic conditions had caused the bank to reconsider its move to the Hill; it was answered only with instructions to contact Reel.

Despite the uncertainty, a URA board vote could occur next week, Gilman said.

Discussions involving Hill community groups, the Penguins and public agencies go back to 2007, and appeared to reach a near resolution in 2014, before ending — at least for now — in a 48-hour rush for the goal this week and a clang off the post.

In 2014, a team development official and a coalition called the Lower Hill Working Group, along with Peduto, City Councilman R. Daniel Lavelle, Allegheny County Executive Rich Fitzgerald, Hill Community Development Corp. President and CEO Marimba Milliones, signed a Community Collaboration and Implementation Plan. The URA and the county-city Sports and Exhibition Authority gave an option to buy the former Civic Arena parcels to an entity created by the team.

The parties agreed to:

In the past year, Gilman said, the city made good on several of its related commitments, including agreeing to divert portions of new parking tax and property tax revenue to neighborhood development and supporting federal funding for affordable housing, "all without a single delay or continuance."

“From the public [sector] side, there has been no change in the discussion of the parameters of the partnership between FNB, [Buccini/Pollin Group] and the Penguins with the city and the community for several months,” Gilman continued. “Certainly details are critical when negotiating these agreements ... but the goal posts were not moving."

A flurry of emails this week, obtained by PublicSource, and conversations with parties involved in the negotiations paint a partial picture of events leading to the URA board’s postponement and the Penguins’ decision to stop development activities.

On May 12, FNB Senior Vice President Jeffrey Keating sent Penguins Senior Vice President and General Counsel Kevin Acklin an email including proposed terms covering $11 million in investment in the Hill. The terms involved the URA borrowing $11 million from FNB, to be paid back over 21 years using the diverted tax revenue, and steering $3 million of that to affordable housing and $8 million to a Greater Hill Reinvestment Fund for unspecified neighborhood investments.

Acklin forwarded that to the URA on Wednesday morning, writing that the Penguins “fully recognize that these took longer than expected to deliver, but they result from several weeks of hard work by FNB” on the financing “under significant external pressures arising from the COVID-19 pandemic.”

Talks continued into Thursday, with Acklin writing to URA staff at 3:56 a.m., submitting slightly revised terms and assuring that his team was “committed to having these loans finalized and funded in connection with” the URA board’s approval of the developer and office tower plan.

At 9:17 a.m. Thursday, URA Deputy Executive Director Diamonte Walker wrote to board members and other staff, noting that the “new versions demonstrate a more straightforward commitment, but as is customary with any financial deal, we anticipate several weeks of work ahead to finalize and settle upon details.” She indicated that the board could approve the developer and plan while making approval conditional on further tweaks before a final property closing.

Other URA staff, in correspondence to the board, indicated that new drafts “seem to provide acceptable progress,” but added that the URA might need some further assurances before it can serve as the borrower of the $11 million.

The nonprofit Hill Community Development Corp. contended on its Facebook page Thursday morning that the URA should not approve the FNB Tower plan until the Penguins fulfill pledges made last year to help pay for improvements to neighborhood amenities including the Ammon Recreation Center and to open a hiring center for neighborhood residents interested in working on the development.

The team warned against delay.

"The Penguins made it clear in the hours before the vote that approval on Thursday was essential and there was concern for being able to keep the deal together,” Gilman said Friday. But given the URA board’s assurance of a vote on approval within a short time, Gilman said, city officials were “very surprised by the announcement” that the Penguins were halting development.

Peduto was unavailable for comment Friday morning, according to his spokesman. The mayor early Friday afternoon issued a statement that the city "remains fully committed to delivering a transformative development to the Lower Hill" with the Penguins and Buccini/Pollin Group. Acklin declined an interview request Friday.

“I’d like the Lower Hill District to be developed according to the commitments made by the key stakeholders involved," Milliones of the Hill CDC said Friday.

If the five-member URA board votes, in the coming days, on the Penguins developer and the office tower plan — despite the team’s decision to cease work on the project — there is no assurance of unanimity.

"Personally, I don't trust the Penguins,” said Jodi Hirsh, a member of the URA board who emphasized that she is not speaking for the authority as a whole. “I don't trust that corporations will put people over profits ever. I think this is a perfect example of them caring for their bottom line first and foremost and trying to pin it on a public entity. I think that it's important to try and fulfill the promises that were made to, frankly, a historically Black community that's gotten bulldozed over and over and over again."

She added that if a delay of a few weeks kills a deal, “then you never had a deal in the first place."

Updates (5/15/2020): This story was updated to include comment from Marimba Milliones of the Hill Community Development Corp. and the scheduling of a special URA board meeting.