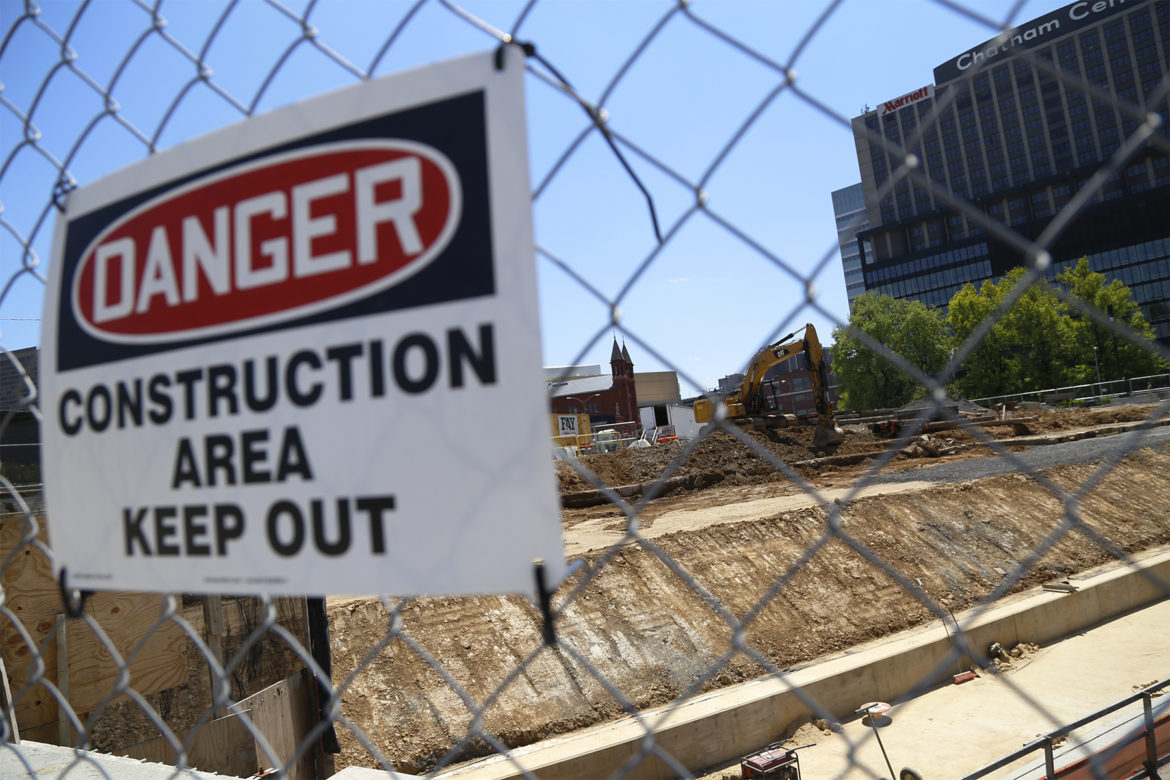 The site near the corner of Washington Place and Bedford Avenue, in the Lower Hill District, on which the Pittsburgh Penguins and developer Buccini/Pollin Group had planned to build FNB Tower, photographed May 13. (Photo by Ryan Loew/PublicSource)

The Pittsburgh Penguins on Thursday announced that they are halting their years-long effort to redevelop the former Civic Arena site in the Lower Hill District, following an Urban Redevelopment Authority board decision to delay an approval vote by two weeks.

The URA board opted not to vote on whether to approve the Pittsburgh Penguins’ chosen developer and a conceptual plan to build a bank office tower, citing continuing discussions on the benefits that would flow to the Hill District. The board expressed plans to vote within two weeks.

The move prompted the Penguins to announce their withdrawal from discussions.

“In a week where the Penguins had to furlough a majority of our employees and we are all suffering the worst health and economic crisis in our nation’s history, we are disappointed that the URA delayed a $200 million development project that alone would create 1,500 construction jobs, 2,000 permanent jobs, deliver the highest commitments to minority- and women-owned businesses in the city’s history, and generate $11 million in direct and immediate investment into the middle and upper Hill District,” wrote Penguins President and CEO David Morehouse, in response to a request for comment from PublicSource. “With constantly changing demands and delays, it makes delivery increasingly impossible. At this point, given the current economic conditions and the apparent lack of support from the URA, we are ceasing our development operations on the Lower Hill.”

The board was scheduled to vote to approve developer Buccini/Pollin Group, of Maryland, which is working with the Penguins, and their plan to build a 26-story, 382,000-square-foot office tower anchored by First National Bank at the corner of Washington Place and Bedford Avenue. FNB Tower would be a major piece of the long-discussed redevelopment of the 28 acres once occupied by the Civic Arena and its parking lots.

URA board member and city council member Daniel Lavelle moved to delay the approval, and though board chair Sam Williamson expressed reservations, the five-member panel eventually agreed to a two-week postponement. The board discussed holding a special meeting later this month to vote on the developer and plan.

The site has been the subject of years of discussions between public entities, Hill community groups and the Penguins. At last month’s URA board meeting, Williamson told Penguins and Buccini/Pollin representatives that the agency would want to see plans to track progress toward meeting commitments made to the community.

"There was a lot of information that came in, in the last two days, that I think moves this in the right direction,” the councilman said, adding that there has not been enough time “to inform the community of what is moving forward, have a conversation."

"I know [Penguins Senior Vice President and General Counsel] Kevin Acklin, on behalf of the Penguins, has been busting his butt in the last couple of days to get this in line,” said Lavelle. Lavelle said he and others in the community need time to ensure that funds set to flow to the community will go beyond the Lower Hill and benefit the Middle Hill and Upper Hill, too.

"We don't want to rush this at all,” agreed board member Lindsay Powell, who is also an assistant to chief of staff in Mayor Bill Peduto’s office. “We want to make sure that we take our time and do it right."

Williamson, though, urged the board not to take too much time, “given the economic moment that we’re in.”

He noted the U.S. unemployment rate of roughly 15%, and said the emerging plan calls for pumping some $11 million into the broader Hill, including affordable housing investments, and gives neighborhood residents the inside track on construction jobs on the site. “This is a project that we want to advance, that we expect to advance, so we can put people to work,” he said.

Earlier this week, the development team expressed optimism. In an interview with PublicSource on Wednesday, Buccini/Pollin Vice President Boris Kaplan said: "We remain full-speed ahead, and are very excited to bring this project to light."

After the vote, though, Morehouse wrote in his statement: “Our primary anchor tenant pledged to grow thousands of new jobs in Pittsburgh and has justified expectations that this development will be delivered on time, in accordance with our Option Agreement.”

And after the meeting, Acklin texted to PublicSource: “We tried our best to deliver this project for the city and the Hill District.”'

URA Executive Director Greg Flisram, who joined the agency in January, said late Thursday that the project may have fallen victim to “a misalignment of expectations” between the development team and neighborhood groups.

“We're really disappointed obviously by the decision,” of the Penguins, he said. He said he was surprised that "a two-week delay would cause the project to topple."

He added that he does “totally understand the fact that this is a high-risk project taken on at a very difficult time. … I hope the project isn't completely dead.”

Flisram said he had not yet charted a plan for reviving it.

A spokesman for Peduto’s office had no immediate comment.

Also Thursday, the URA board heard updates on the agency’s efforts to help area residents to keep up with their rent or mortgage payments, and to keep small businesses afloat during the COVID-19 pandemic.

URA staff reported that the agency has helped 304 households to make housing payments, with another 220 in process. The URA has also closed 147 small business emergency loans of as much as $15,000 each, and is planning to launch another program that would grant loans of as much as $75,000 meant to help neighborhood businesses to rehire staff and restock inventory.