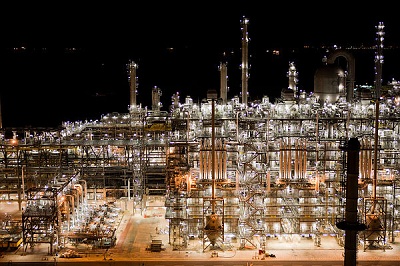 Much has been said about the number of jobs the petrochemical 'cracker' plant that may be coming to Western Pennsylvania would add to the local economy. Between 500 and 1,000 permanent jobs are created at ethylene crackers, plus thousands of other potential jobs that would result from associated businesses that cluster around them.

Shell Oil Co., which announced it may build the plant in the next six years, has estimated it would bring more than 10,000 jobs to the area.

But what of its environmental impact? Would it become a significant source of pollution? And how would it impact Western Pennsylvania’s already poor air quality?

Shell has kept specifics of the plant closely held. And the company declined a request to talk about the plant’s potential environmental impact.

But similar plants around the country are significant sources of emissions like Nitrogen Oxides (NOx) and Volatile Organic Compounds (VOCs). Both are precursors to ozone, or smog, a pollutant that already exceeds federal limits in the Pittsburgh region.

Ozone can aggravate asthma and increase susceptibility to respiratory illnesses like pneumonia and bronchitis, according to the Environmental Protection Agency. The Pittsburgh region has not attained the national standard for ozone, so any new sources of its components will be watched closely by regulators and environmental groups.

Most of the emissions from ethane cracker plants  come from the process of “steam” cracking ethane, a hydrocarbon found in “wet” natural gas like the Marcellus shale, says Goetz Veser, a professor of chemical engineering at Pitt. During this process, ethane is heated to very high temperatures--around 1500 degrees Fahrenheit. The furnaces used to create this type of heat usually run on natural gas, said Veser.

In outlining its plans for the plant in Beaver County, Shell has mentioned another world-scale plant it owns in Norco, La. In addition to ethylene, that plant produces propylene and butadiene, two other important petrochemicals used in the creation of plastics.

If it were located in Pennsylvania, the Norco facility would be the highest emitter of VOCs in southwest Pennsylvania, more than doubling the amount at the next highest source, a coal preparation plant in Greene County run by Consol Energy, according to emissions data from the EPA’s 2008 National Emissions Inventory.

It would also be among the top 10 plants in southwestern Pennsylvania by NOx emissions, with a 2008 total of 3,791 tons. The U.S. Steel Clairton Coke Works, the largest NOx emitter in Allegheny County, produced 4,195 tons of NOx that year.

It’s unclear whether the Monaca site would emit a similar amount of pollution, Veser says. Though the process would likely be similar at the two plants, the Beaver County facility will be required to use the newest, most efficient technology available, likely resulting in lower emissions.

Another Shell “world-scale” cracker opened in Singapore in 2009 produces 2,000 metric tons, or 2,200 tons, of NOx, according to an impact statement prepared by Shell. This would also qualify as a “top 10” emitter in southwest Pennsylvania.

If and when Shell does produce a plan for the plant, the company may need to supply regulators with air pollution models that can show how its emissions will be dispersed, says Joe Osborne, of the Group Against Smog and Pollution.

Since the Pittsburgh region is already failing federal ozone standards, Shell may need to buy emissions offsets. It could buy these offsets from other companies either shutting down facilities or implementing pollution control measures, says Bonnie Smith, an EPA spokeswoman.

The cracker itself is likely to be only part of the impact--both environmental and economic--expected to take place in and around the proposed Monaca facility. Other plastics and petrochemical facilities are likely to sprout around any cracking plant.

That’s because ethylene is a gas, making it difficult to transport. Plants that can use ethylene to create plastics tend to aggregate around cracker plants, says Martha Moore of the American Chemistry Council, an industry group. These facilities can convert ethylene into products that are more easily shipped, like polyethylene pellets, which go into commonly used plastics like freezer bags, milk jugs, and textiles.

Shell said the cracker would be “world scale,” which means it would produce more than a million tons of ethylene per year.

The company says it’s still determining how much ethane would be available, and once it decides that it would determine the size of the complex.

There are 44 ethane crackers in the United States, said Jeff Robinson, chief of air permits for EPA's Region 6. Of those, about 30 are in Texas or Louisiana.  After a decade without a new ethane cracker built in the United States, there are about 20 that have been proposed in recent years to take advantage of the abundant ethane sources found in shale gas, said Martha Moore of the American Chemistry Council.

The ethane comes out of the ground during hydraulic fracturing, or fracking, for natural gas. The process has opened up new areas for drilling in Pennsylvania’s Marcellus shale. Shell recently bought about 700,000 acres of gas leases in the Marcellus, and earlier in March announced plans to build a $1 billion ethane cracker in Monaca.

The bottom line, Veser says, is that Shell’s cracker will bring jobs, but it will also put pressure on air quality in the region. “Is an ethane cracker going to create emissions? Absolutely,” says Veser, who has consulted with Athier, another company looking to build a cracker in the region.

“Does it mean we should resist it? I don’t think so, unless you stop using the products from that industry--and you can't."