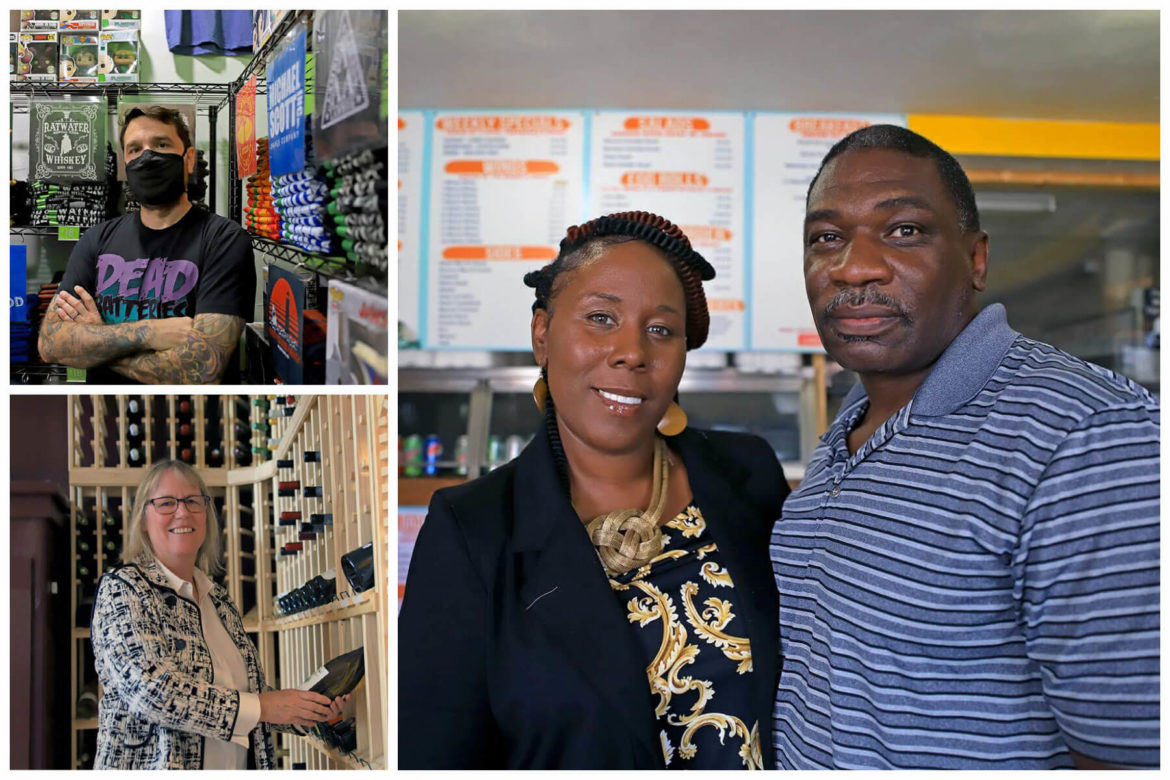 When word spread of the first coronavirus outbreaks, Cheryl Stasinowsky didn’t know what it would mean for her business Mary’s Vine, a wine bar in Rankin that she runs with her family. She didn’t imagine states would begin to shut down businesses. Still, she started to see fewer and fewer customers show up for wine.

“On a night when we normally would have a full house, we maybe had 10 all night,” Stasinowsky said. “We had to start letting our employees go earlier, and they weren’t getting tips,” she said. “Reservations were canceling like it was just nothing. Just cancel, cancel, cancel.”

Mary’s Vine only opened for business in late August, about seven months before the virus hit the United States hard.

“March was supposed to be the month we were finally gonna come out the other end of the whole thing and finally start breaking even because we had built up our customer base and it was going really well,” Stasinowsky said. “And we lost a ton of money in March.”

Central to the elevator pitch for Mary’s Vine is its unique atmosphere, nestled inside a renovated church. The business was not prepared to offer takeout food during the shutdown, Stasinowsky said, so the family has been on unemployment while offering takeout wine for a few hours on Saturdays. While the family business has received federal aid from the Paycheck Protection Program and Economic Injury Disaster Loans, it hasn’t made up for all the lost business.

“I don’t have sour grapes against anyone because the governor’s doing the best he can. Everyone’s trying to do the best they can, but no one’s ever done this before so they don’t even know what the best is,” Stasinowsky said. “It’s hard for all of us.” 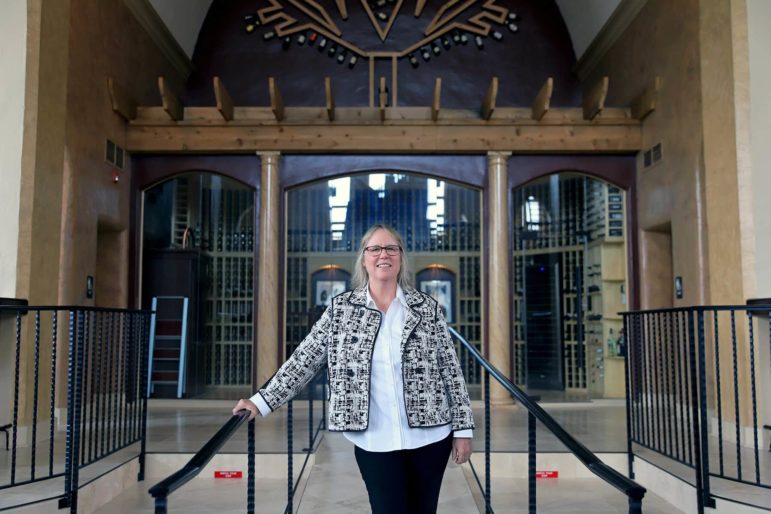 Cheryl Stasinowsky inside of Mary's Vine, a wine bar that opened for business in August 2019. (Photo by Jay Manning/PublicSource)

Stasinowsky’s story feels familiar to many business owners and residents in Mon Valley towns like Rankin, Braddock, Homestead and West Mifflin, where the pandemic has halted progress toward a revitalized business landscape in areas often defined by decades of economic decline. And it’s bars and restaurants that are being hit the hardest due to the increased health risks associated with these sorts of gathering places.

Many Mon Valley business owners and community leaders believe the pandemic won’t squander the progress that’s been made in recent years. Still, with no end to the pandemic and a shortage of aid money, the Mon Valley area is left with yet another daunting economic challenge.

Throughout the shutdown and ongoing restrictions to stop the spread of COVID-19, Stasinowsky said they’ve felt supported and welcomed by the Rankin community.

Running a catering business during the pandemic has provided unique challenges for Kamahlai Stewart, who serves the Munhall community with House of Soul Catering, a business she’s run with her husband for nearly three years. Catering used to account for about 80% of their business, with takeout representing the other 20%. Now, it’s more or less reversed.

“Whereas one catering order normally would be a huge benefit … we have to really, really work six days a week to get up to what one catering [job] was,” Stewart said.

Stewart currently employs six people after having to lay off four due to the pandemic.

“We’re still walking through it,” Stewart said of their business demand. “We’re slow, not a pace we’d normally be at this time of year.”

There aren’t many other places to order food nearby, she said, and they emphasize offering employment opportunities for youth. While the pandemic has made running the business harder, she’s looking forward.

“With prayer, we have to just be optimistic about it and push through it,” Stewart said. “We have got to overcome.” 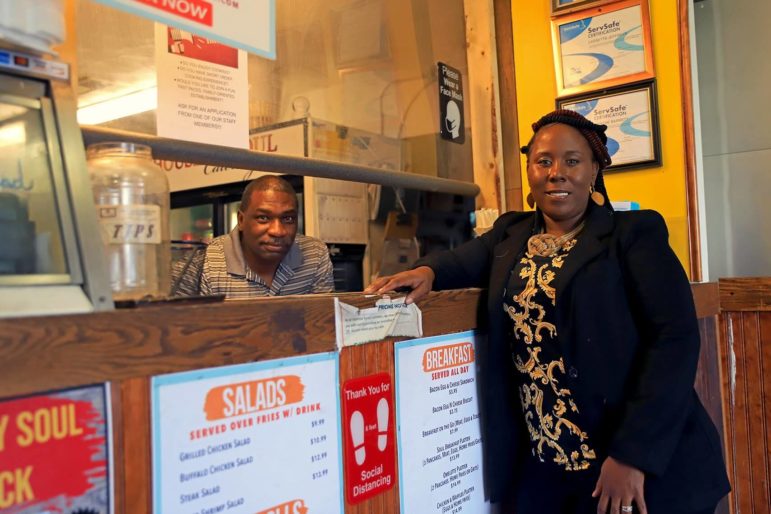 Jasmine Sims used to make food for people from her former home in McKeesport, and she did so well that she opened Mon Valley Kitchen, a breakfast place in West Mifflin, almost a year ago.

Though Mon Valley Kitchen has always primarily offered takeout, actually getting her hands on ingredients proved difficult when the pandemic first hit. Simple, essential items like bread, milk and eggs proved hard to come by at first, making food like French toast more difficult to make.

“It was pretty hard,” Sims said. “Being in the food industry, food is pretty much the thing we sell. ...I had to revise the menu a few times to accommodate what I can get from the stores.”

Now, Sims has been able to get the ingredients she needs to offer the standard menu.

Business has been coming back, but it’s not nearly as consistent as before. Sometimes, there will be a rush of orders, which can be difficult to keep up with, Sims said. She feels nervous about the pandemic, but she’s trying to think positively.

“I feel like, if you just try to take every precaution that you can and just try not to think about it too hard, just go about your day, this pandemic will pass,” Sims said.

Getting back on track

Chuck Starrett said he’s seen a lot of success in the past four to five years from new businesses in the Mon Valley. He heads the Enterprise Zone Corporation of Braddock, a nonprofit that assists businesses in Braddock and a few other nearby neighborhoods.

“There’s been a positive momentum taking place,” Starrett said. “And we were really looking at 2020 as being a big year.”

“Of course, since the late 1970s, you’d have to say there’s been a decline. It’s been a steady, long-term decline, and it’s been difficult to work out of that,” Starrett said. “So, a lot of the businesses in those communities, particularly the steel-related and industrial, trucking and all of those, they left a long time ago.”

Fresh, new businesses have cropped up in the past several years, exemplifying the sort of fresh entrepreneurial spirit the Mon Valley needs, he said. Despite the pandemic, he feels like the area is still moving toward revitalization.

“By and large, other than the restaurants, I can’t think of any local businesses that have closed since the COVID hit in March. So, it hasn’t been a devastating impact,” Starrett said. “Clearly, things were bad for decades, and they’ve been rising out of the ashes.”

Starrett points to Ink Division, an apparel print shop in Braddock, as an example of a new business bringing fresh energy to the Mon Valley. It opened in Braddock about seven years ago, co-owner Jason Lott said.

“We were just excited about what we were hearing about this location at the time, and we were massively growing,” Lott said. “It was out of my house, and my family couldn’t even get around in the basement or the garage so we had to find something pretty quick, and it was just available, quick, we thought the area was cool, we liked what was happening. [Now-Lt. Gov. John] Fetterman was the mayor. It was exciting.” 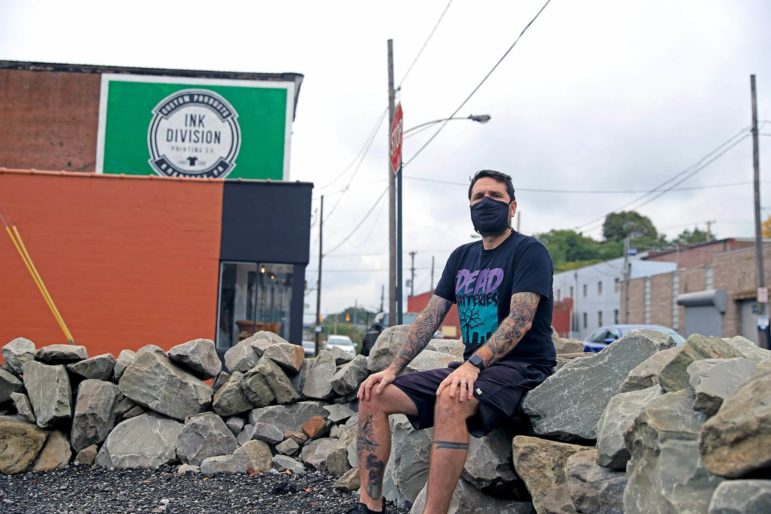 At the start of the pandemic, they kept their 12 employees on payroll, but laid them off after three weeks.

“When it first started, it was just kind of like two weeks of total terror because we didn’t know what was going to happen when the orders came through to shut down all non-essential businesses,” Lott said. “We didn’t really have a plan for anything like that happening.”

They emailed local bars and restaurants and offered a deal to help them produce T-shirts for their businesses. This ended up bringing in enough money to bring back three of Ink Division’s employees, and they’ve rebounded enough since to bring everyone back to work.

Lott loves running the business in Braddock, citing a lot of local customers and plentiful traffic from a main, heavily trafficked street. Still, he can’t speak for everyone, he said, and acknowledges the neighborhood has issues to overcome, such as a lack of common amenities like a supermarket.

“Honestly, there’s still not a ton down here,” Lott said. “When we came, we were kind of hoping this was going to blow up into a new kind of neighborhood with a lot of stuff going on. There've been a few new businesses come, but not quite at the volume we expected it to happen.”

Over in Homestead, Joe Deasy and his father completely shut down their entertainment complex holding Pittsburgh VR, Ace Axe Throwing and Escape Room Pittsburgh in mid-March.

“When it first started, it was just kind of like two weeks of total terror because we didn’t know what was going to happen when the orders came through to shut down all non-essential businesses.”

They put thousands of dollars into a big St. Patrick’s Day party on a Saturday. There were rumblings of shutdowns, but they hadn’t heard anything concrete. A few days later, bars were ordered to shut down, and then non-life-sustaining-businesses. They shut down until the county went green months later.

“It’s funny, me and my dad … we were still in there, just me and him, doing construction, maintaining the building. We never took down the St. Patrick’s Day decorations,” Deasy said, laughing. “It was St. Patrick’s Day for like two months there.”

The businesses have been able to re-open in a limited capacity. If you want to do some axe throwing, for example, you have to make a reservation, come in a small group and wear masks. Instructors don’t stay close to the customers for as long as before and lots of hand sanitizer is available.

“We’re fortunate with the building being so big that we don’t have to be right on top of people,” Deasy said.

Owning the building means rent payments haven’t been draining money. The business had about 50 employees before and now they have 25 or fewer, he said. Deasy said they’re operating at about 25% of what they were before, which pretty directly correlates to the numbers of customers who have been coming.

“We set our own destiny right now. I am hopeful for the future,” Deasy said. “And every week, it is promising. There is a percentage more people every week.”

He still feels excited about being in Homestead.

“It’s a main street primed for a resurgence,” Deasy said. “I was just maybe a little too excited, that I thought maybe it would happen in five years. Maybe it’s about ten years. But I think we’ll get there.”