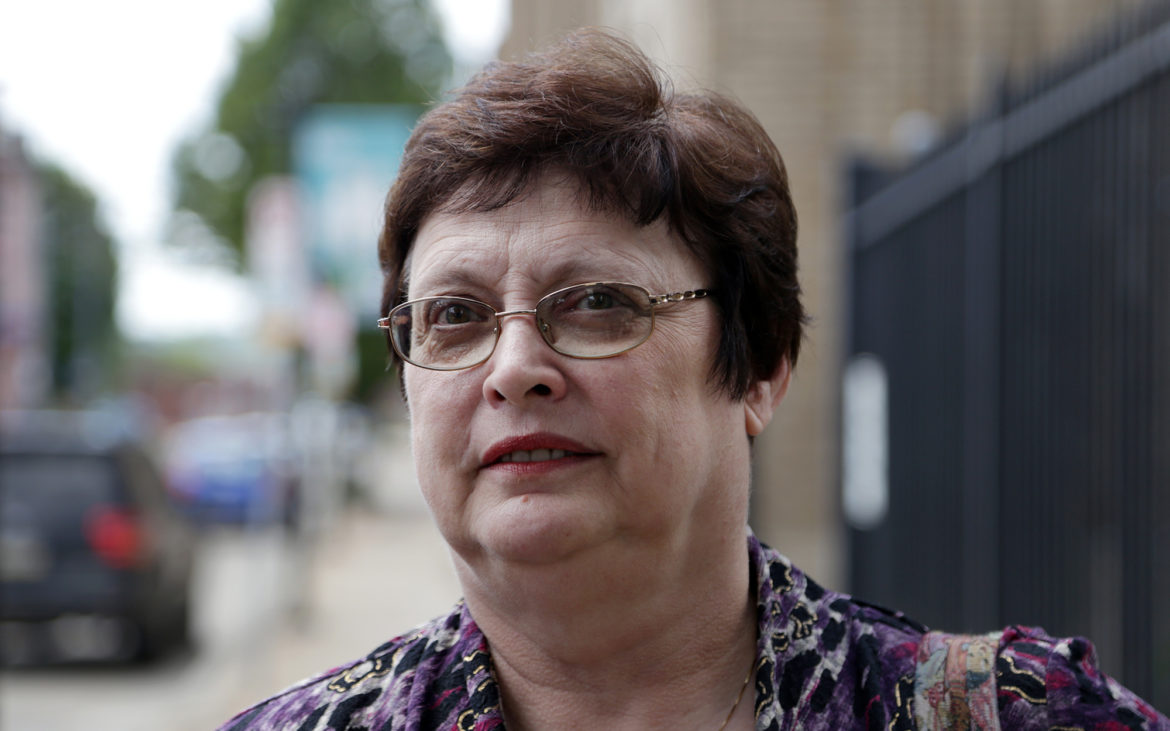 Darlene Harris is in her 11th year on city council and represents much of the North Side. (Photo by Ryan Loew/PublicSource)

From riding on top of an elephant at the circus to driving her gold Jeep through a North Side park, to liking questionable pages and comments, Pittsburgh Councilwoman Darlene Harris is no stranger to the controversies that tend to emanate from her Facebook page.

She also has a keen way of dealing with her adversaries on Facebook — occasionally, she blocks them.

But blocking her constituents may create a next-level controversy for the councilwoman. According to a recent court ruling and legal experts PublicSource spoke with, Harris blocking her constituents may be infringing upon their First Amendment rights afforded by U.S. Constitution because it is preventing them from participating in a public forum. PublicSource was able to identify at least nine people Harris blocked.

Have you been blocked by a public official? Do you know someone who has? Let us know.

When you block someone on Facebook, that person can no longer view your profile page or posts. You can’t message them or comment on their posts. When you are a private citizen, you are free to block an annoying ‘friend’ of yours. But if you are a public official, it gets complicated. When public officials use social media to interact with their constituents, blocking the constituents may be problematic.

In response to Harris’ recent blocks, the American Civil Liberties Union of Pennsylvania is planning to send a letter to Harris notifying her that her actions could violate the Constitution. The ACLU typically sends those types of letters as a first step before it sues someone. Vic Walczak, the legal director for ACLU PA, said his organization planned on sending similar letters to Harris and four other elected officials in the state (who he would not name) before the end of the month. Depending on how those officials react to the ACLU’s letters, they could potentially face lawsuits.

Harris, however, said her page was used for personal means and that she felt she was acting within her own First Amendment rights by blocking some people from viewing it. She couldn’t provide an estimate of how many people she’s blocked in total but confirmed that she blocked several recently. If her actions violated the law, she said, she’s happy to defend herself in court.

“Anybody who feels I have gone against the law, take me to court. I don’t believe I have,” she said. “It’s my personal Facebook page. I’ll wait and see if [the ACLU] sends me that letter and we’ll go from there.”

Currently, state divisions of the ACLU have several similar suits against public officials pending, and the Knight First Amendment Institute is currently suing President Donald Trump for blocking his critics on Twitter. In Pennsylvania, Walczak said the issue of elected officials interacting with constituents on social media is “a ripe area for exploration in the courts.”

Chris MacTaggart is one of the constituents Harris has blocked, in part because he asked basic, if critical, questions. Recently, MacTaggart had seen one of his Central North Side neighbors post a photo on Facebook questioning why Harris, who represents the area on Pittsburgh City Council, was driving her car through Allegheny Commons Park. He brushed it off until the next day when he saw Harris post a response explaining that she was “personally investigating complaints” that a resident had made. He wasn’t buying the excuse, so he replied to Harris’ comment.

“My problem is that’s an explanation for being in the park, not for why you were driving on the sidewalk,” MacTaggart, 36, said. “Maybe that’s super pedantic of me and honestly maybe I shouldn’t have done it but I said, ‘Hey, that’s not a real explanation.’”

Harris, MacTaggart and other North Siders exchanged several comments on the post for hours until Harris got fed up. After MacTaggart criticized Harris for “liking” a gay joke aimed at Mayor Bill Peduto (which she initially declined to undo), she blocked him.

“I was about halfway through loading the page when I got the notice,” he said. “I know what that means.”

At issue is how an elected official uses a Facebook or Twitter account. According to a recent Virginia case, a page or account used for official business can be treated as a public forum, a place where their constituents can interact with an elected official in their role as a government agent. The Supreme Court has long interpreted the First Amendment to mean that governments and government agents can’t restrict a person’s access to a public forum. They can’t stop someone from attending a city council meeting or speaking out in a town square, for example. This is why Pittsburgh City Council lets residents speak for three minutes each before every public meeting and why protesters can, usually, march on streets and sidewalks.

“In a general matter, the public is entitled to interact in the public forum,” said David Snyder, the executive director of the First Amendment Coalition. “[Being blocked is] akin to the government saying you can’t enter this public meeting because you said a mean comment.”

In the Virginia case, a federal judge ruled in July that same interpretation extends to social media. District Judge James C. Cacheris ruled that a member of the Loudoun County Board of Supervisors violated Brian Davison’s First Amendment rights when she blocked him on Facebook for roughly 12 hours after he posted a critical comment. The official used her Facebook page for her work on the Board of Supervisors so preventing Davison from interacting with her there amounted to stifling his right to free speech in a public space.

Michael Bragg, Davison’s attorney, predicts more cases like his will come up. Pittsburgh City Councilwoman Darlene Harris speaks at a mayoral debate in Brookline on May 2, 2017. (Photo by Ryan Loew/PublicSource)

The way Davison sees it, his legal fights — most of which he’s waged solo and without Bragg’s help — are a way of holding public officials accountable. He hopes his cases — there are three in total — will lead to greater transparency in the future.

“If I don’t do it, who will?” Davison, 44, said. “I wasn’t the first to get blocked, I was the first to say I wasn’t going to put up with it anymore. It’s unfortunate that politicians feel like they have to block others’ viewpoints.”

While this ruling marks a concrete legal step for the courts defining what counts as free speech on social media, there are several caveats to a Facebook or Twitter account being subject to the First Amendment. For one, the account must be used for official business, meaning it’s designated as official or it’s used primarily for official business. Purely personal pages may not be subject to First Amendment regulations. It’s also important to keep in mind that these First Amendment regulations only apply to the people using Facebook and Twitter, not to Facebook and Twitter themselves. Because the social media companies are privately owned, the government can’t regulate speech on their platforms.

Harris maintains that her page is strictly for personal use, though she describes herself as a Pittsburgh City Councilwoman, and lists her city email address and website in her biography. She also interacts with constituents regularly, though she does tell some to email her to handle official business.

Snyder said public officials, and any other Facebook user or page, can set restrictions on who can post and comment on their social media pages as long as their rules apply to everyone and don’t target individuals. For example, an official could delete all comments that contain curse words and block users who repeatedly use curse words on their page and not violate the First Amendment. All rules, though, must be “viewpoint neutral” and can’t be used to block a user who is critical or expressing an unpopular opinion.

On her page, Harris said she routinely blocks people who use foul language — such as the F-word — and those who spread lies.

“If I think they’re either lying or putting malicious stories up, I get rid of them,” Harris said.

Because this area of law is largely undefined — the ruling for Davison is the only concrete case law so far — groups like the National League of Cities [NLC], which provides resources and trainings to both government workers and elected officials, don’t offer much guidance when it comes to social media. Tom Martin, a spokesperson for the NLC, said his organization offers general training on how to use social media but no specific ethical guidance. Chuck Thompson, the executive director of the International Municipal Lawyers Association, said his group is able to offer general advice but is waiting for the courts to better define what is and is not allowed.

“We believe that local governments would get ahead of these issues by sending their attorneys to get the training they need to be prepared for when these issues arise,” Thompson wrote in an email. “But, as you can imagine, some issues will be new to us no matter how hard we try to envision them.”

"If I think they’re either lying or putting malicious stories up, I get rid of them."

“I’m more concerned for the people in the North Side who can’t hire a lawyer or force themselves into Darlene’s office, those people who don’t have the time or the resources,” MacTaggart said, explaining that his job as a consultant provides him with more flexibility than others may have. “I didn’t think about it until it was inconvenient for me, which means it’s near impossible for other people.”

Don Orkoskey, a photographer and community organizer who lived in the North Side, said Harris blocked him after he was critical of her on Facebook this past spring when she ran for mayor. Orkoskey said he was surprised to find he was blocked, especially because he’s worked closely with other members of city council in the past who he hadn’t voted for and had disagreements with.

“It’s just weird to me that someone who is supposed to represent our district can just shut those voices down,” he said.

One thought on “Councilwoman Darlene Harris blocks her critics on Facebook. That may infringe upon their First Amendment rights.”