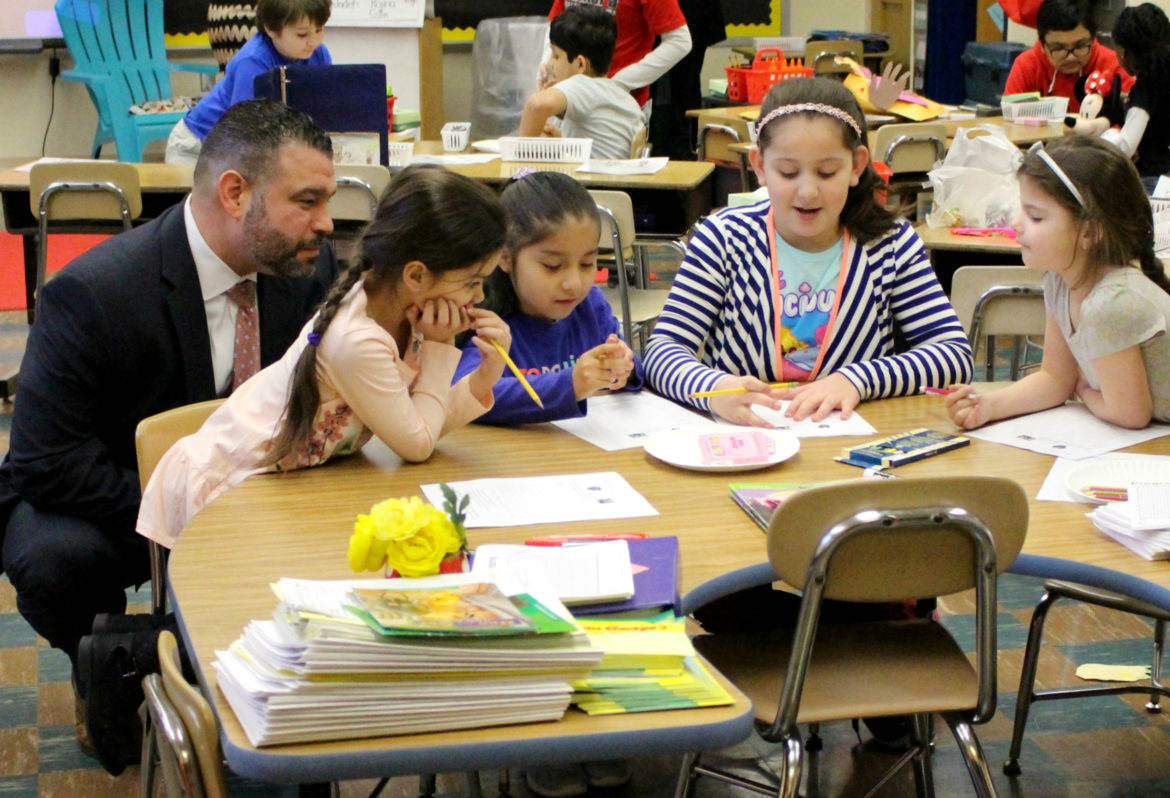 Pennsylvania Secretary of Education Pedro Rivera engages with students at the E.H. Phillips Elementary School in Central Dauphin School District on Feb. 16, 2017, as part of the Wolf Administration’s Schools That Teach tour. Since the tour kicked off in 2015, Rivera has visited dozens of schools and spoken with hundreds of stakeholders about improving educational opportunities for all students across the state. (Photo provided by the Pennsylvania Department of Education)

Pennsylvania Secretary of Education Pedro Rivera is not letting uncertainty at the U.S. Department of Education derail any of the plans his department has set in motion for improving education in the state.

But Rivera, in an interview this week with PublicSource, said the current education agenda will remain in place. The priorities have included implementing the Pennsylvania Core standards, aligning state tests and curriculum to those standards, revising the system for assessing quality in schools, creating new high school graduation requirements and working to increase equity among public schools.

“We are not going to reverse course at all,” Rivera said. “We are going to move in the direction we are moving.”

The secretary said the decision was made in consultation with his staff and Gov. Tom Wolf.

DeVos’ desire to eliminate the Common Core — an effort of the Obama administration to create national standards for K-12 education — falls in line with the wishes of President Donald Trump, who wants to see states enact their own standards.

In Pennsylvania, Rivera says the PA Core (the state’s version of the Common Core) will remain in effect regardless of what happens at the federal level.

He said the standards in the state’s core were created to ensure students receive a rigorous education and, in particular, focus on reading by third grade and math proficiency by seventh grade.

Third-grade reading proficiency is important because if students can’t read by third grade, they have difficulty in other subjects such as math, science and social studies, which require reading comprehension.

“We are not going to reverse course at all. We are going to move in the direction we are moving.”

Seventh-grade math proficiency is essential because, without it, students may be unable to excel in the more difficult math they face in high school.

The rigor of those standards hit home for the secretary earlier this week while helping his daughter, a kindergarten student, with her math homework, which involved subtraction.

When Rivera and his wife turned to an online early learning app for help, they found subtraction in lessons slated for first grade.

The secretary explained to his wife that kindergarten math skills were realigned during his time as superintendent of the School District of Lancaster, where his daughter attends. They did this to better prepare students for math proficiency in later grades.

“What we wanted to do was make sure first graders were prepared to take trigonometry or calculus by the time they graduated. So we had to teach addition and subtraction in kindergarten,” said Rivera, who was superintendent from 2008 to 2015.

DeVos has said she wants to limit the size and scope of the federal education department and return much of the responsibility for education back to the states.

If that happens, Rivera said he’s confident his department can handle the responsibility because leaders on his staff all have education experience. They have either risen from the ranks of teachers to superintendents or have moved from education to working in the Legislature.

In contrast, DeVos is a billionaire who has never worked as an educator nor attended or sent her children to public school.

“I’m really confident that we can handle the job and set an agenda that is kid and education focused,” Rivera said.

Rivera said his department has been hearing from parents of special education students who want to know what will happen with the Individuals With Disabilities Education Act — federal legislation that promises a free and appropriate education to all students with a disability.

DeVos said she was unaware the act existed when questioned about it during her confirmation hearing. Rivera said it’s too soon to tell what, if anything, will happen with special education at the federal level.

“You have a lot of parents who have fought long and hard to ensure their children aren’t mistreated in their schools,” Rivera said.

“It wasn’t that long ago that special education students were tucked way in corner basement classrooms.”

The secretary said he stands with those parents and predicted they would fight any effort to dismantle the law or reduce federal funding for special education.

DeVos, an advocate of school choice who supports vouchers and charter schools, has criticized traditional public school districts. She called them a “dead end.”

“You have a lot of parents who have fought long and hard to ensure their children aren’t mistreated in their schools.”

Rivera said he wasn’t sure if the federal government could force a voucher system on the states, but he believes such an action would require involvement of the state Legislature and would be a lengthy process.

School choice is a good idea, Rivera said, when done equitably, with quality and “the needs of students and communities in mind.”

But choice created simply for the purpose of providing a choice is not necessarily a good educational strategy, he said.

During a radio interview this week in her home state of Michigan, DeVos said the biggest goal for education should be “continuing to stoke and enhance a child’s creative and curious nature.”

But for Rivera, the goal is far more substantial — to create equity among school districts. He wants to narrow the variance in the amount spent per pupil between wealthy districts and poor districts, which leads to achievement gaps that separate students by class and race.

He also said the value of traditional public schools is that they take in all students, regardless of their needs or issues.

“Whoever walks through the door, that’s the student that you are going to teach that day,” he said.

7 thoughts on “Betsy DeVos could bring radical changes to public schools. PA’s top education official is not changing his approach.”