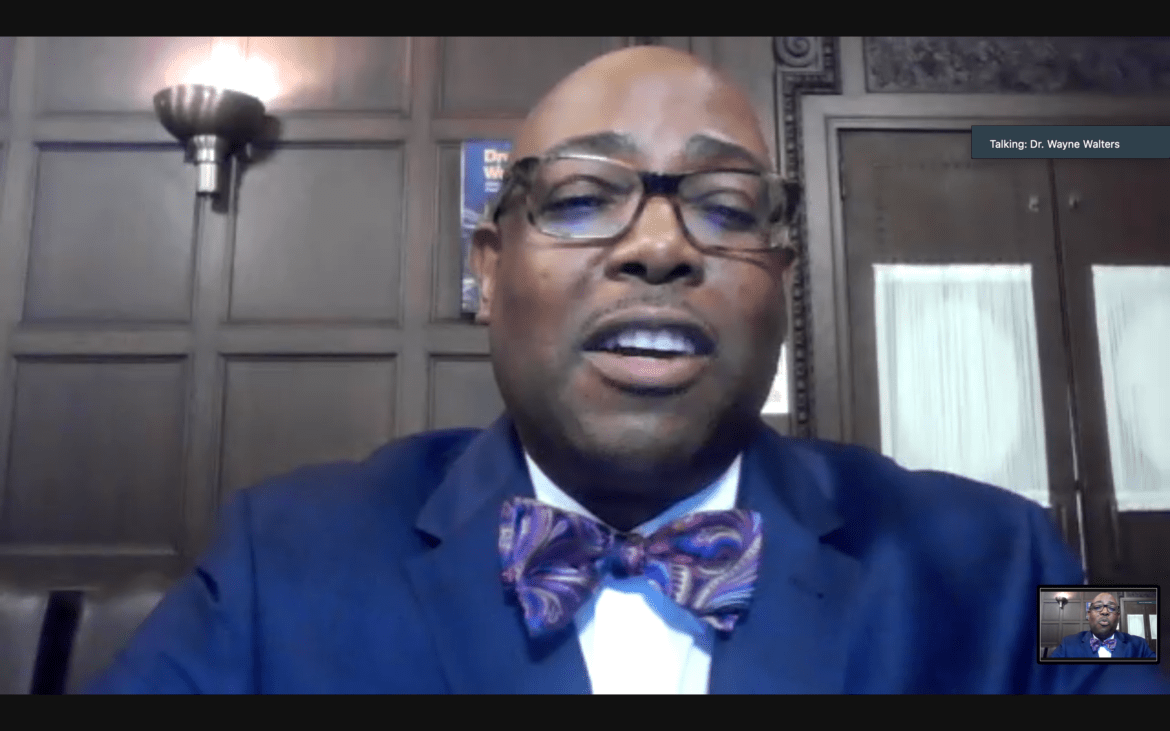 Pittsburgh Public Schools board named Wayne Walters to serve as interim superintendent of the school district. (Screenshot of media briefing)

The appointment of Walters to serve as interim superintendent was approved unanimously Wednesday evening and comes in the wake of Hamlet’s resignation.

Walters has worked within Pittsburgh Public Schools [PPS] for more than 30 years. After moving to Pittsburgh to attend Carnegie Mellon University at age 16, Walters went on to serve as a PPS teacher in the North Side. Walters later became principal at Pittsburgh Obama. Under his leadership, the high school was ranked in the top 10% national ranking of Best High Schools by U.S. News & World Report. In 2017, Walters was appointed assistant superintendent of professional development and special programming.

Walters said he wants to "advance organizational cohesion" and improve trust and communication. “Children’s lives are on the line, and we need to elevate the quality of teaching and accelerate learning for all students,” he said.

"If we stay focused on what’s best for students, we’ll be right most often in every action we take. However, at the same time it is important for us to acknowledge the challenges facing our district," he went on to cite budget and transportation issues, as well as “a public confidence crisis.”

He added: "We’re all here for the same reason: We want Pittsburgh Public Schools to be the best it can be.”

PPS School Board President Sylvia Wilson described Hamlet’s departure as “unfortunate, but necessary” to eliminate distractions and focus on providing quality education. The district — which began its school year on Sept. 3 — has spent the first month of school finding its footing in the new year: working to close a bus transportation seat gap, grappling with next steps to address a lack of educational gains and adjusting to being back in school buildings.

At Wednesday’s meeting, Wilson said the board is confident in Walters’ ability to serve.

“We know firsthand that his commitment to Pittsburgh Public Schools and Pittsburgh is unwavering,” Wilson said. She said board members are confident Walters could step in and immediately begin to address problems because of his extensive experience with and knowledge of the district’s longtime issues.

Board Member Sala Udin spoke favorably about the decision, saying he hopes the new acting leader and district administrators will work together to move the district forward.

The board reportedly interviewed five candidates for the position but declined to confirm this number of candidates considered at the media briefings.

In December, the board will begin a national search for the permanent superintendent, following a general election on Nov. 2 that may change the board’s makeup.

Walters will be permitted to apply to become the permanent superintendent.

Hamlet announced he would resign on Oct. 1 in a Sept. 8 letter to the school board. The resignation letter came two weeks after the State Ethics Commission found Hamlet violated the state’s Ethics Act. The investigative findings came amid mounting tensions with families over how the district has been operated throughout the COVID-19 pandemic.

The board formally accepted Hamlet’s resignation at a special legislative meeting on Sept. 14. The district appointed Hamlet as superintendent in May 2016 following Superintendent Linda Lane’s decision in September 2015 not to seek a contract extension.

More than 160 community members and parents from all nine school board districts sent a joint statement to the school board asking that the board hire an interim superintendent who had no involvement in Hamlet’s hiring or culpability in decisions that resulted in ethics violations.

The leadership change is an opportunity to “restore the community’s trust in the district,” the statement said. “PPS’s next leader deserves community support so they can effectuate the changes our students and families need. ...

“We believe if our school system is to be truly representative of our community, we need leadership that is able to handle the complexity of the task while rallying broad community support for public education,” the statement said.

Monday’s public hearing marked the first public forum for district families and community members since Hamlet announced his resignation. A few community members took the opportunity to write to the board about their upcoming decision on a new superintendent.

In a message to the board, parent Harry Hochheiser asked for an open, transparent and inclusive hiring process for the next superintendent and said the board has a “rare opportunity to make amends and to right the ship.”

“As bad as Dr Hamlet’s ethical lapses may have been, they were eclipsed by his complete failure of leadership over the past 18 months,” said Hochheiser, citing schedule changes, transportation shortages and a slow technology rollout. “We need an interim superintendent who will begin the process of bringing attention back to what is best for our students.”