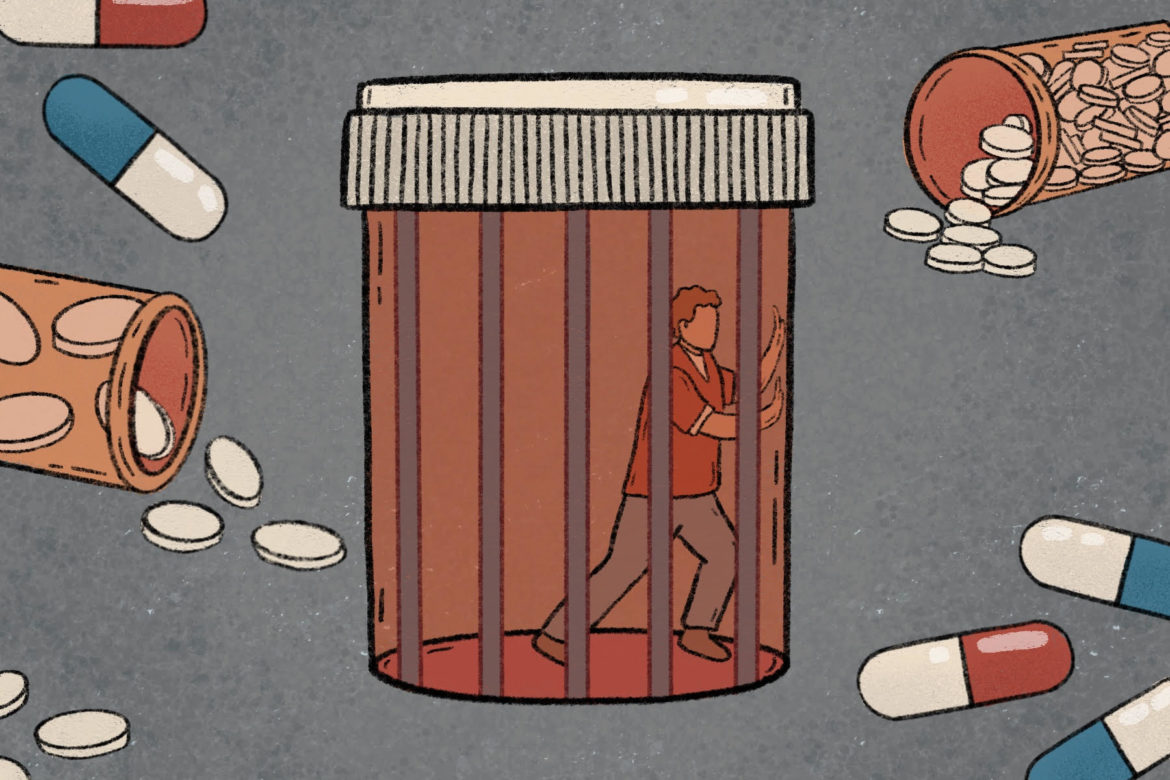 Justin Rape was a teenager the first time he landed in the Allegheny County Jail.

His struggle with mental illness — and consequently, law enforcement — started when he was a child. Growing up, he grappled with rejection from his father, and his ADHD and social anxiety were difficult to manage for his mom, a single parent of five children. “She’d have to call the police to get me under control,” Rape said, recalling fits of yelling and throwing items.

By age 14, he was a “frequent flyer” with the police, who sometimes took him to psychiatric hospitals for inpatient treatment. There, he was prescribed medications like Klonopin, which is used to treat seizures, panic attacks and anxiety. That’s where his reliance on substances began. “I remember taking it the first time and within the half hour, being like, ‘Wow, I feel better now.’ ... That should have been a warning sign,” he said. A few years later, he tore knee ligaments in a dirt bike accident and was prescribed hydrocodone and oxycodone. He was quickly hooked on opiates. 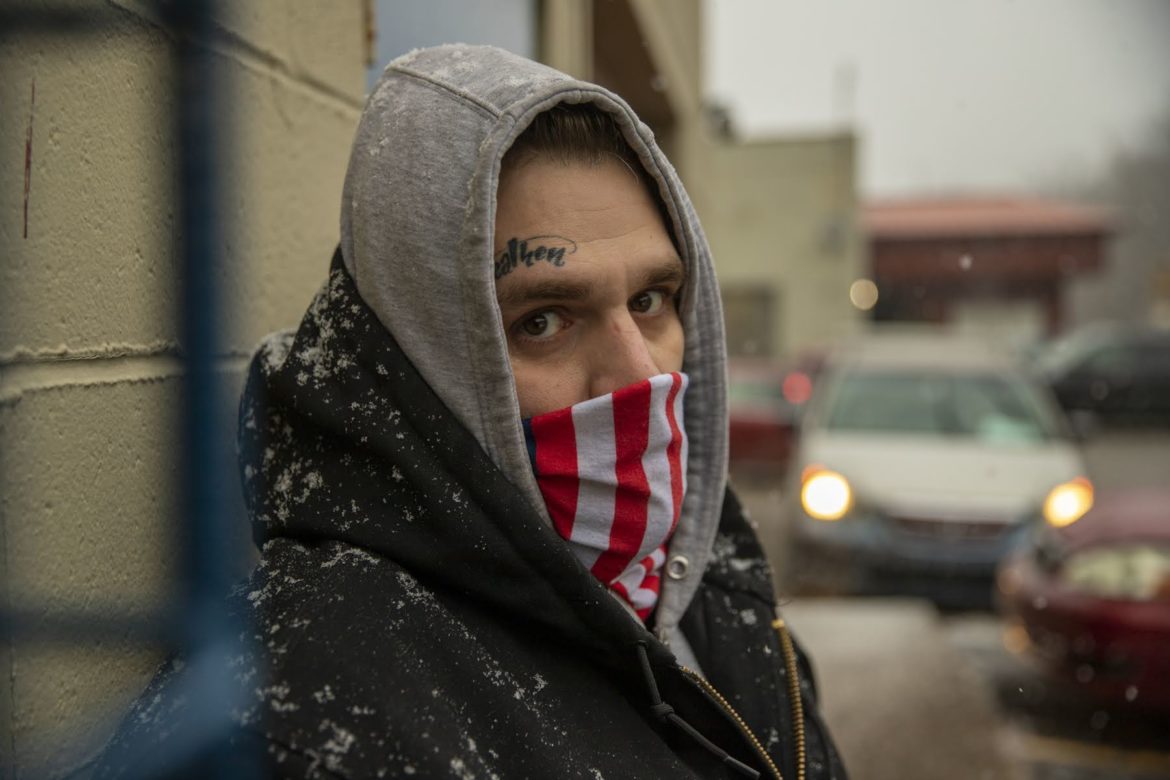 Justin Rape in December outside of a methadone clinic he visits daily. (Photo by Jay Manning/PublicSource)

Since then, Rape, now 33, estimates he’s been to the Allegheny County Jail [ACJ] over 20 times, all for charges he said stem from his addiction and mental health issues.

“Incarceration was pretty much my psych ward,” he said.

During his stays at the jail, Rape remembers being prescribed numerous medications for his mental health after brief visits with a psychiatrist. Yet counseling was never offered, he said.

The absence of counseling and reliance on medication is a common occurrence in facilities like ACJ, where many incarcerated people would benefit from therapy, but problems like high population turnover, understaffing and lack of funding make delivering care complicated.

Yet some experts, while acknowledging logistical challenges, told PublicSource that therapy would be extremely beneficial for the jail population and suggested solutions such as group therapy or connecting them with more robust services before they become incarcerated.

Rape described the drugs as a “Band-Aid” for his mental health issues. “As far as I understand jail, it’s supposed to be rehabilitation,” he said. “You’re not rehabilitating, you’re just pacifying.”

ACJ has made efforts. In March, a recently hired psychologist provided 80 therapy sessions, most of which took place in confidential settings, according to Chief Deputy Warden of Healthcare Services Laura Williams. “As far as, is everybody who needs [therapy] receiving it? Maybe not. But everybody who is prescribed it receives it,” Williams said at the March Jail Oversight Board meeting.

According to a report from the warden, 46 people — or 3% of the population — received cognitive-behavioral treatment between Dec. 16 and Jan. 15.

In contrast, in a Jan. 12 one-day snapshot, about 19% of the jail population — 324 people — had a prescription for psychotropic medications, according to information obtained via a public records request. That’s in line with the average for a county jail, correctional mental health experts say.

ACJ has psychiatrists evaluate individuals and prescribe medications when necessary, and mental health specialists intermittently check in with people and conduct crisis management. Some former mental health providers at ACJ saw a greater need for therapy.

“Most of the people I saw, they needed therapy,” said Allie Palm, a psychiatric nurse practitioner who worked at the jail for three months before quitting in 2016. She said many of her patients at the jail had untreated post-traumatic stress disorder [PTSD]. ”Maybe they needed a small dose of medication, but they definitely needed therapy.”

But former staffers also describe a litany of challenges.

Dr. Peter Hauber, a psychiatrist who worked at the jail between 2016 and 2019, said in an ideal world, providing therapy at the jail would be “enormously helpful.” But he also acknowledged the cost and resources necessary to do so, including hiring enough staff and having a private space to conduct sessions. “Where do they see these people? I’m seeing these people in a gymnasium,” he said.

Dr. Gail Kubrin, a psychiatrist who worked with Hauber at the jail for roughly the same time period, echoed the logistical concerns. “You can’t get into in-depth, individual therapy with someone in jail because they might get released. And if you’ve opened up all this traumatic stuff and then they’re gone, that can actually be dangerous,” she said.

Kubrin remembers the jail previously providing group therapy on topics like insomnia or stress management, which she supported bringing back. “Those seemed to be helpful. The patients really liked them.”

In a September interview with PublicSource, Williams said the jail was able to offer more group therapy before the COVID-19 pandemic, but that social distancing measures have made doing so difficult. The county did not respond to requests for comment for this story.

While some incarcerated people have raised concerns that medication was overused, Kubrin said she and her colleagues were careful to prescribe medications appropriately. But she agreed with concerns that the jail depends on medications to treat mental health issues, rather than also incorporating other forms of treatment. “There is an overreliance on medication because there isn’t any therapy ... because there’s so little else that’s possible,” she said.

The pandemic has imperiled the mental health of many incarcerated people.

Since March, in-person visitation at ACJ has been suspended. Individuals are only allowed out of their cells for one hour a day, at most. And the jail has had several COVID-19 outbreaks, leading many people inside to fear for their health.

Last May, Richard Arrington started to feel anxious and depressed. He tried to keep himself occupied by reading the Bible, praying, writing poetry and volunteering to work. Still, it was mentally strenuous. “The lack of human contact, it’s real bad in here,” he said.

For six weeks, Arrington asked if he could speak to a therapist. He was told it wasn’t possible. “I spoke with the inmate and he is still having problems with anxiety and depression. The inmate wants one on one with a therapist. I explained that there is no therapy in the jail,” a mental health specialist wrote in his notes after visiting Arrington on July 16.

Arrington, who was released from jail in February, later expressed dismay about the absence of therapy.

“How can you have a drug program and you got no therapy? How can you have a mental health pod, and you ain’t got no therapy?” Arrington said in a November phone interview with PublicSource. In February and March, over a third of the jail population was receiving drug and alcohol treatment. “I’m not saying I think they don’t care. I just think they don’t have the resources or [don’t] want to allocate the money to hire people to do this.”

Arrington’s experience isn’t uncommon. Jails across the country are filled with incarcerated people who need therapy but don’t get it.

According to a 2014 report by the Treatment Advocacy Center and the National Sheriff’s Association, there are 10 times more people with serious mental illness in jails and prisons than in state psychiatric hospitals. Many experts and advocates see this as a consequence of failing to provide adequate treatment. “We have much too much relied on [jails] as sort of the de facto mental health treatment providers, which they’re not,” said Ron Honberg, an independent mental health consultant and former director of policy and legal affairs for the National Alliance on Mental Illness [NAMI].

Dr. Terry Kupers, a psychiatrist with expertise in correctional mental health, has advocated for diversion programs, such as mental health courts and drug courts — both of which Allegheny County has had for two decades — to keep people with mental illness out of jail in the first place. “The fact that someone gets arrested should be a red flag to us,” Kupers said. “They are in a difficult crisis, and we should divert some resources their way to keep them out of trouble.”

Psychotherapy and psychotropic medications statistically yield similar improvements when treating disorders like depression and anxiety and are often even more effective when combined. “If you or I went to a psychologist, we would likely be offered psychotherapy before medication is tried,” said Joel Dvoskin, an Arizona-based psychologist and correctional mental health expert. “And if you can get a good result without medication, that’s better.”

"We have much too much relied on [jails] as sort of the de facto mental health treatment providers, which they’re not."

Honberg agreed. “If the goal is to actually help people get better, you need to provide a lot more than medication. And this is a real opportunity to address the problems that probably led to many of these people being incarcerated in the first place,” he said.

MAYA Organization, a local nonprofit, resumed group therapy for women at ACJ in March after a hiatus that started in 2019 due to financial constraints. So far, between four and 10 women have attended sessions in the jail’s gym, facilitated virtually by MAYA staff. “Our focus is really on creating small, safe spaces,” said Julie Evans, a therapist and program coordinator.

Group activities range from mindfulness to socially distanced yoga. Participants can continue receiving individualized services after they leave the jail, which Evans said is crucial, especially in cases of past trauma. “We’re in a really unique position to be able to provide that continuity of service,” she said.

Now, Rape is getting the help he needs. After relapsing in 2019, he went to rehab, was able to get insurance and started seeing a psychiatrist and therapist regularly. He also participates in group therapy at a methadone clinic once a month and has a registered service dog, Anubis, for support. He’s had no new charges since going to rehab.

Not all of Rape’s experiences at the jail were negative.

During his last stay in 2019, he saw an outside psychiatrist via a telehealth visit and was prescribed effective medications that he still takes today. But overall, he said, the jail made his mental health worse. He often wakes up in the middle of the night crying because of PTSD, he said, which he was diagnosed with after leaving ACJ. “I'm constantly being attacked or stabbed in my nightmares,” he said. “That was 100% a direct result from ACJ and prison.”

Had he received proper care for his mental health conditions and had assistance navigating services, Rape believes he would have gotten far less wrapped up in the criminal justice system. “If I had someone to help work on my exact problems like I do now,” he said, “I would have been able to avoid probably a good decade of jail.”