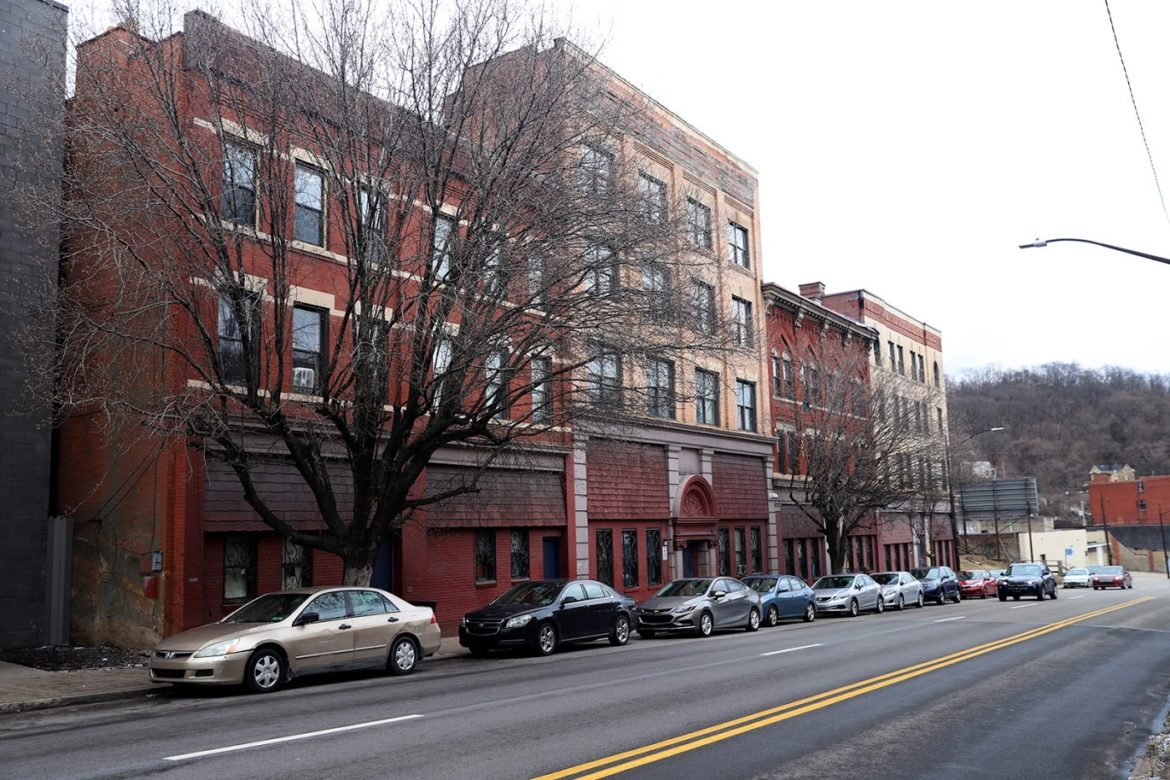 A chunk of the region’s affordable housing stock is up for sale, and some neighborhood advocates wonder whether a future buyer would displace low-income tenants once obligations to preserve affordability expire.

Allegheny Housing Rehabilitation Corporation [AHRCO] has solicited interested buyers for a “1,500-unit affordable housing portfolio [in] Western Pennsylvania.” A notice circulating in the real estate community indicates that offers were due Feb. 26.

Affordable housing advocates including Ronell Guy, a tenants’ rights organizer for more than three decades, said AHRCO’s portfolio represents one of the biggest collections of privately-owned affordable housing in the region.

A sale would be “very important” because of the potential results if the properties fell into “the wrong hands,” said Carol Hardeman, co-director of the Hill District Consensus Group, whose neighborhood includes several AHRCO properties.

“We don’t want another Penn Plaza,” she said, referring to an East Liberty affordable apartment complex from which more than 200 residents were displaced in 2015 and 2016 for redevelopment.

Contracts between AHRCO affiliates and the federal Department of Housing and Urban Development [HUD] are likely to preserve affordability in most of the company’s properties until late this decade or beyond — but not indefinitely.

AHRCO President Lara Washington declined an interview but issued a statement saying there “is no imminent sale of AHRCO and the properties we manage.” The statement did not say that AHRCO wants to sell, but said the company has “been constantly approached by affordable housing developers” over the last decade.

Mayor Bill Peduto said Tuesday that there “is a very real concern that if those properties were to go into the wrong hands, or maintenance issues would become worse, it would have a very negative effect on the future growth” of some neighborhoods, notably those in the East End.

Peduto said that AHRCO has property “in areas that have seen rent payments going up, and we have an opportunity in making investments in those areas” in partnership with community groups that could buy the properties. He said the administration has begun to have conversations with a handful of community development corporations about the AHRCO properties.

“We can address blight and address affordability by having the right partner” organizations, he said. The city’s role? “Probably financing.”

But if the properties are eventually sold to another buyer and converted to market rents?

“We think we’re in a housing crisis now?” said Guy, who is now a consultant for the Landless Peoples Alliance and the Pittsburgh Union of Regional Renters.

Tenants have limited legal options to protect affordable housing — but if they’re organized, they can sometimes have influence.

“Why can’t we figure out some way to include the residents” Guy asked, “so that in the future, when conditions start to slide, they have some real power to make sure that they’re safe, decent and sanitary?”

AHRCO owns or manages complexes in the city neighborhoods of the Hill District, West Oakland, Larimer, Homewood, Lincoln-Lemington-Belmar, Spring Hill-City View and California-Kirkbride, as well as in the suburbs of West Mifflin, Rankin, Braddock, New Kensington and Uniontown, according to its website and research done by Carnegie Mellon University's CREATE Lab.

Guy said AHRCO’s unit count is topped only by ACTION-Housing, Inc., among the region’s private, affordable housing landlords. Nonprofit ACTION-Housing runs 1,736 units, according to its website. 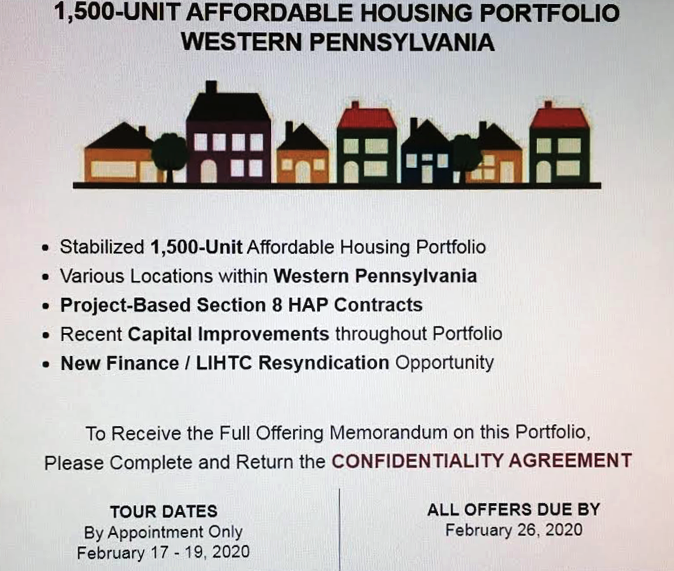 A handout calling for offers from potential buyers of AHRCO's affordable housing portfolio.

AHRCO’s founder, the late Milt Washington, began building the affordable housing empire in the early 1970s. Much of the financing came through a HUD program called Project-Based Section 8 Rental Assistance, according to CREATE Lab’s research.

Project-Based Section 8 allows HUD to subsidize privately owned housing for low-income families. In return for HUD’s money, the owners agree, typically for 20 years, to charge their low-income tenants only 30% of their income in rent. The property owner can get more money by agreeing to extend the commitment to keep rents affordable beyond the expiration of the original contract.

Anne Wright, a researcher with the CREATE Lab, is working with neighborhood groups to understand and visualize the city’s affordable housing issues. She has tapped those groups’ knowledge, affordable housing databases, and Allegheny County real estate records to assemble information on properties tied to AHRCO.

Most or all of AHRCO’s properties appear to be subject to ongoing contracts locking in affordability. The contracts for which she could find data expire over the course of 2029 through 2044.

Would AHRCO sell to a buyer inclined to eventually convert properties from affordable to market rate? The company’s statement didn’t directly address that question.

“My father and his partners’ goals were always about assisting families with affordable housing, providing employment opportunities and helping to grow and support small businesses in our communities,” Lara Washington wrote in the statement. “Preserving and honoring my father's legacy is deeply important to us and guides us in all decision-making.”

AHRCO’s legacy was smoke-stained in August, when fire ravaged AHRCO’s De Ruad Street complex in West Oakland, displacing 20 households. The fire was attributed to a child playing with matches. AHRCO offered replacement housing to the families, though some households sought other arrangements.

Guy said she’s been concerned with conditions at AHRCO properties for years and has repeatedly urged the Washington family to consider selling. “Let somebody get in there that can do a better job,” she said.

The Hill District Consensus Group would like the Housing Authority of the City of Pittsburgh to consider buying AHRCO’s properties in the city, Hardeman said. 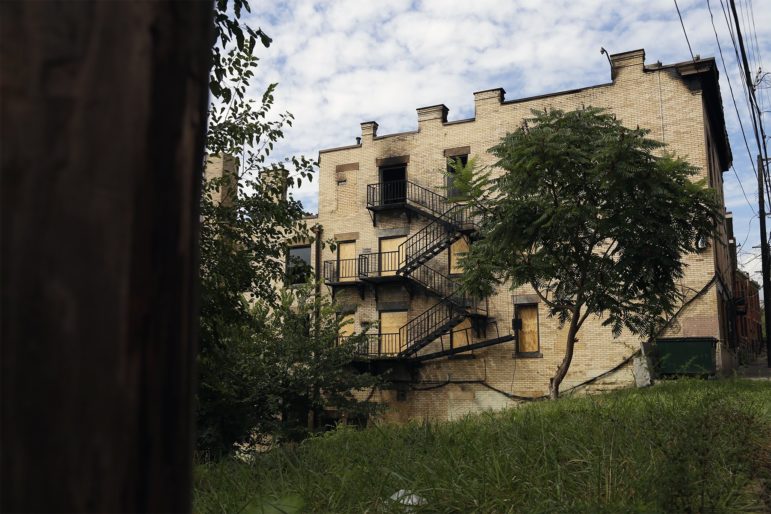 An Aug. 17 fire destroyed much of an AHRCO building on De Ruad Street in West Oakland. (Photo by Ryan Loew/PublicSource)

Housing Authority Executive Director Caster Binion said Thursday that the AHRCO properties are “an opportunity that we might take a look at. But we’re not making any commitment.”

He added that “any opportunity to increase the affordability opportunity in the city of Pittsburgh, of housing, we want to participate,” but noted the agency has “not taken a deep dive on this at this time.”

In the short-term after any sale, “tenants should not experience any adverse actions,” as their leases remain intact, said Bridgett Simmons, staff attorney with the National Housing Law Project, based in San Francisco.

But, she added, “Changes in ownership and management can impact the type of resources contributed to the property and the services received by the tenants.” Tenants who form councils or other groupings are more likely to have influence on the outcomes of a sale, she said.

A potential buyer may wait out the contracts with HUD and then convert to market rents.

“Those owners are going to start thinking about, well, if I put this on the market and get market rent, I don’t have to deal with HUD regulations and the red tape of these programs, but I could also pull in more money in rents,” Simmons said.

HUD could block a sale, the federal agency’s spokesperson confirmed.

Simmons said HUD is likely to inspect the properties before approving a sale. It is also likely to check into a purchaser’s experience with low-income properties and review its management capacity and history.

Susan Popkin is director of the Housing Opportunities and Services Together (HOST) Initiative at the D.C.-based Urban Institute and author of the 2016 book “No Simple Solutions: Transforming Public Housing in Chicago.”

She said HUD would ask of a potential AHRCO buyer, “if you are going to keep it affordable. Would you be protecting the tenants’ rights? That you have the money to keep it financially viable,” she said. “They’d be trying to avoid speculators.”

Update (3/3/2020): This story was updated to include comment from Pittsburgh Mayor Bill Peduto and information on the cause of the De Ruad fire.