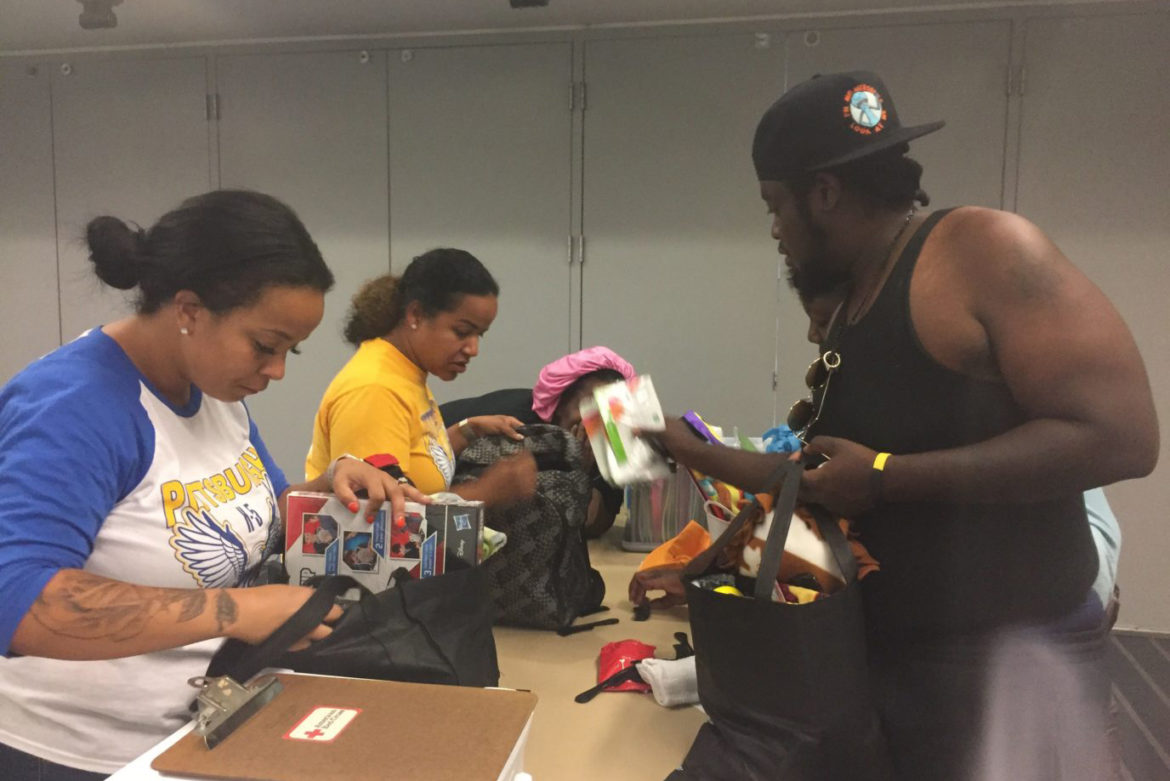 Christopher Green, 32, picks up supplies brought by staff from Pittsburgh Weil PreK-5. Green is staying at the David L. Lawrence Convention Center after his family lost its apartment to a 5-alarm fire on Saturday. (Photo by Dale Shoemaker/PublicSource)

Update 8/21/2019: As of Tuesday evening, the American Red Cross closed the overnight shelter at the David L. Lawrence Convention Center. In a statement, the Red Cross said the impacted De Ruad Street residents had "been provided with alternate housing and sheltering options." In a text message Tuesday night, Christopher Green confirmed to PublicSource that he and his wife were able to stay at a hotel overnight Tuesday. The Red Cross, in its statement, said it will continue to assist the victims of the fire.

A fire that destroyed much of a low-income apartment building on the edge of West Oakland and the Hill District on Saturday and displaced 74 people left some residents still unsure where they’ll end up.

Shawna Patrick and her husband, Christopher Green, 32, spent Tuesday afternoon in limbo at the David L. Lawrence Convention Center in Downtown, talking with American Red Cross volunteers, trying to coordinate and make plans amid uncertainty. The facility is serving as a temporary shelter for victims of the five-alarm blaze. Around 30 people stayed at the convention center on Saturday night, though numbers dropped on Sunday.

Patrick, 29, said the living conditions in the apartment prior to the fire were “deplorable.”

“I have mold in my house. When it rains, I can hear it come in through my kids' bedroom,” Patrick said. “Mice, we have mice.” Patrick said she could see mice in her apartment and hear them in the walls.

She said they’d had issues with their landlord since they moved in last September. “This is just the tip of the iceberg,” she said.

No residents were injured in the fire, and two injured firefighters have recovered, but many questions remain about where residents will be able to live. Allegheny Housing Rehabilitation Corporation [AHRCO] and an affiliated company Hill Com II Associates owns and operates the building that burned reportedly due to a child playing with matches. AHRCO operates other low-income housing around Pittsburgh and Allegheny County. Residents had previously raised health and safety concerns about the apartments on De Ruad Street and Fifth Avenue, according to the Pittsburgh Post-Gazette.

At this point, city inspectors have assessed both the buildings where the fire caused damage and those adjacent. According to Lara Washington, president of AHRCO, three apartment addresses, 2018 De Ruad St., 2041 Fifth Ave. and 2035 Fifth Ave. were ruled to be uninhabitable. That affects 20 individual apartments and 18 families. AHRCO is in the process of finding new apartments for those individuals in the company’s portfolio, some in the Hill District, some in the North Side and some in West Mifflin.

Washington said AHRCO has been able to find new homes for the majority of the 18 families who have to move but that there are a few who don’t have a new place to go yet. As of Tuesday evening, Patrick and Green were told they could move to a new apartment in West Mifflin but were still trying to coordinate the move. Washington said for the families who have to leave the Hill District, AHRCO would set up a system to give them priority to move back to the neighborhood as apartments open up in the future.

“We understand the connection to the community and their desire to stay so that’s why we created this priority system,” Washington said. “[We’re] trying to keep as many people as possible in the Hill.”

Regarding the living conditions mentioned by Patrick, Green and the Post-Gazette, Washington said there were “no outstanding violations that we’re aware of.”

“The past issues that were mentioned in that article were resolved at the time. Outstanding issues, of course, we address in a timely way,” she said. AHRCO has an ongoing contract with a pest control company and tries to “systematically deal with these issues.”

Patrick and Green had lived on De Ruad Street with their four children. The children are now staying at a family member’s home but neither Patrick nor Green have family who have enough space to take them all in.

In an email to PublicSource, Green said he thought white victims of a tragedy would have received better treatment from the Pittsburgh community. His children, he said, felt like the convention center was like a “refugee camp.” 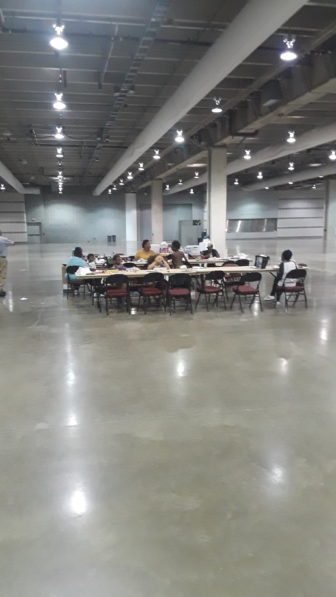 David L. Lawrence Convention Center in Downtown is serving as a temporary shelter for victims of the five-alarm blaze. (Photo courtesy of Christopher Green)

While Red Cross volunteers and community members are helping them now, they know that aid is temporary.

Green runs a landscaping business and said he’s had to turn down four of his clients so far this week because he’s too busy taking care of himself and his family after the fire. Similarly, Patrick has been providing hair and beauty services but hasn't been able to meet her clients.

Patrick said she returned to her apartment for a short time yesterday and had to go to the hospital shortly after to have her eyes flushed.

“There was soot coming out of my eyes as they were flushing my eyes, black and brown soot in my eyes,” she said. “They had a white towel around me and the towel was black when they were done. And they had to do that before they could even put the yellow dye in my eyes to see the damage.”

Pointing to her blood-shot eyes, she added: “I'm not crying, I haven't been crying, but this is the result.”

For Patrick, the fire is the second tragedy in her life in as many years. She first moved into the apartment on De Ruad Street last year after her father passed away. She was trying to start over, she said, but had difficulty finding quality housing for her family.

In the meantime, it’s not clear what comes next for residents. Lisa Landis, a Red Cross spokesperson who was at the convention center on Tuesday, said the Red Cross was in the process of opening individual cases for each resident and would help find them places to live.

“There's a lot of dialogue that's happening right now with these residents and the property management company,” she said. “We provide the shelter, but then we're around for the long term, behind the scenes, to make sure all the players are at the table and these folks are getting the help that they need.”

Red Cross volunteers said residents have been provided hot meals and medical aid. Some volunteers have taken residents on trips to Walmart to purchase clothes and medicine.

Other members of the Hill District community are also pooling resources to help the affected residents. Kira Henderson, the principal of Pittsburgh Weil PreK-5 in the Hill District, said six of the school’s families lived in the De Ruad Street and Fifth Avenue apartments. On Tuesday afternoon, she and a secretary dropped off bags and baskets of blankets, clothes, toys and personal hygiene and hair care supplies. The school regularly stocks those types of items in a resource closet for students and their families to take home. Henderson also said Ike Wear, a store in the Hill District, is helping to provide families with supplies.

“The community is pulling together for these things,” Henderson said.