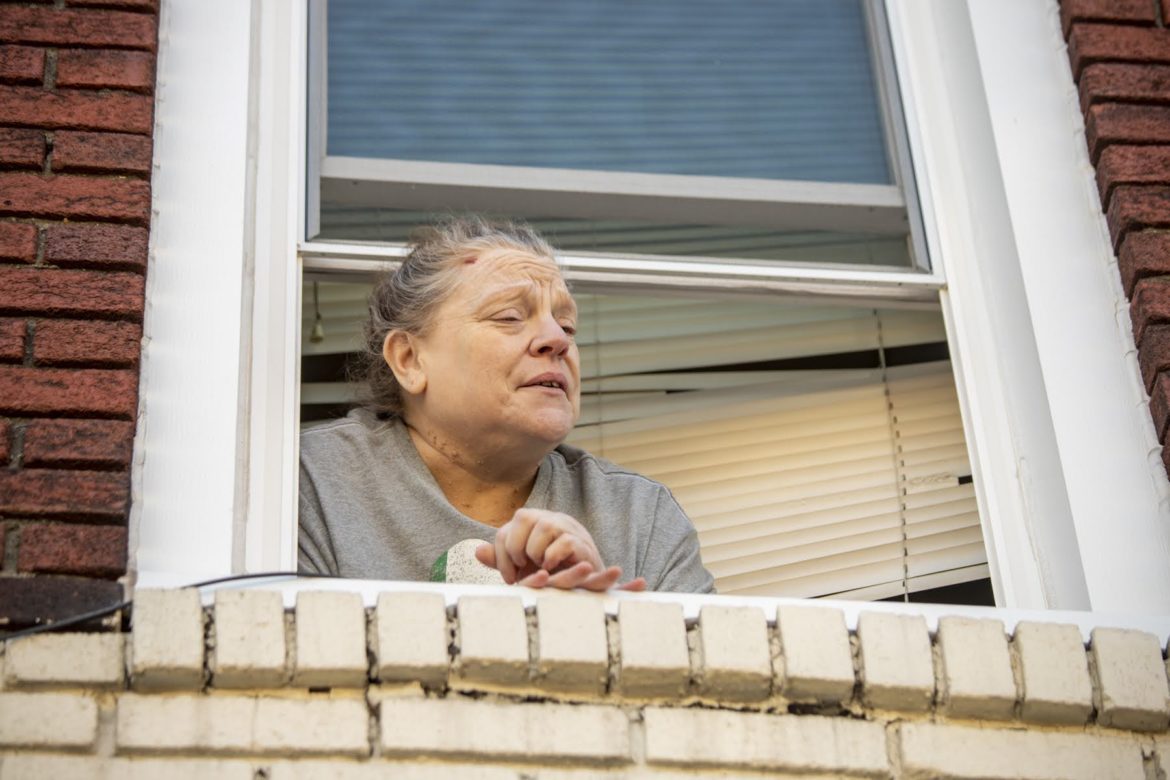 Mary Ellen Barber peers out the window of her second-story apartment in Avalon. She fended off one eviction filing by her landlord but knows she may imminently face another. (Photo by Jay Manning/PublicSource)

Late March sunshine brightened Mary Ellen Barber’s apartment as two friends helped her to clean up. There was reason, though, to fear the long-term forecast.

A recent night of wind and rain brought a dank morning. “I woke up and walked out into my kitchen, and I heard like rain beating,” she said. “And there was water everywhere, dirty, brown, yucky water. It kind of looked like coffee, really watered-down and [fallen] plaster, and rain still coming in.”

The roof was leaking, and the apartment in Avalon she has occupied since 2011 was, in her words, “falling down around me.”

On March 9, a district judge ruled against her landlord’s bid to evict her — something that happens in only a tiny fraction of eviction cases.

Barber knows that property manager Nexus Real Estate could file a new case against her as soon as April 30, the anniversary date of her last signed lease. And the sound of renovations in other units reminds her that the landlord wants her out of the way. At least the courtroom victory  gives her time to continue the difficult search for a North Hills landlord willing to accept her Housing Choice (Section 8) Voucher.

But is time enough?

And to think it all started with a faulty fire escape.

‘I mean, you got your money’

For life’s necessities, Barber, 58, relies on Social Security disability and her housing voucher. For emotional support, she depends on a handful of close friends and an orange cat named Schmitty. “She’s been my little rock, mommy’s love.”

The flight of stairs to her second-floor apartment is a challenge for Barber. It’s hard to imagine her — Schmitty presumably in arms — descending the fire escape in an emergency. Useful or not, though, emergency exits are required in Avalon. 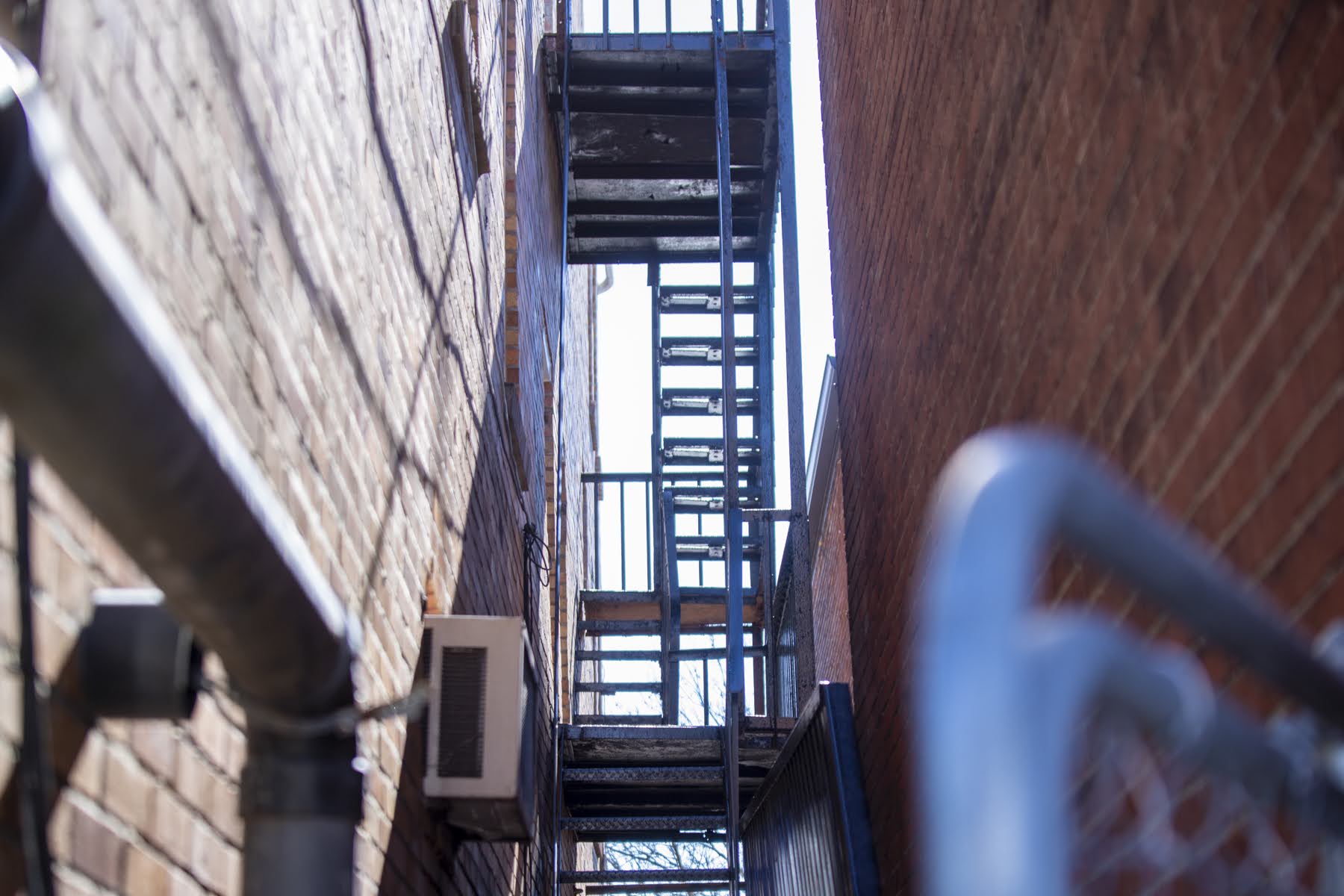 Failure of this fire escape to pass an Avalon Borough inspection led to a payment stoppage by the Allegheny County Housing Authority, which in turn prompted Mary Ellen Barber's landlord to issue its first notice telling her to move out. (Photo by Jay Manning/PublicSource)

In early summer 2020, a borough inspector, on a routine review required of all rental properties, gave the three-story building on California Avenue a failing grade, in large part because the fire escape was deemed unsafe. That prompted the Allegheny County Housing Authority, which pays most of Barber’s rent under the voucher’s terms, to demand a fix within 30 days. When that didn’t happen, the authority stopped paying its share of the rent in August.

While the authority is obligated to cut payments for units that remain unsafe, such situations are "extremely uncommon" in the county's voucher portfolio of around 5,700 households, according to Kim Longwell, director of the authority’s Housing Choice Voucher program.

Complicating matters, JLB Diversified Investments bought the property at the end of June, and Nexus began to manage it. State Corporation Bureau records indicate that both companies are managed by Meredith Cohen.

Attorney Ken Scholtz, representing Nexus, noted in a lengthy written response to questions that the property had already failed inspection before his client took control and was set to be condemned. Repairs were made, though the fire escape was "a lingering issue," he wrote.

Barber continued to pay her share of the rent, $144 monthly, even as Nexus began tacking on late fees of $50 and, later, $75 per month, due to the housing authority’s non-payment.

By year’s end, the fire escape was fixed, but the authority’s payments hadn’t resumed. In early January, Nexus sent Barber a letter alleging a balance due of $3,075, and warning that  she would need to move within 60 days or be the subject of an eviction filing if she didn’t leave by Jan. 13. A second letter, dated Jan. 11, added: "We are planning to renovate your apartment, and as owner, we are permitted to do so by law."

On Feb. 18, the housing authority paid Nexus $3,848, which was $341 more than was owed, according to the landlord’s ledger of her account, which Barber provided to PublicSource.

A right to renovate?

A week after the filing of the eviction case, amid the muffled sounds of workers remodeling other units in the building, Barber sat in her living room, reading aloud the reasons outlined in the landlord’s complaint: “‘Property owner’s right to renovate is being impeded. Additionally, we have multiple issues with Section 8.’”

Under Pennsylvania’s Landlord and Tenant Act, there is no explicit right to renovate. There are three legitimate reasons to evict someone: failure to pay rent, termination of the lease term and a “material breach” of the lease, according to Swain Uber, an attorney with the tenant aid group RentHelpPgh. “Material breach,” though, is a subjective term, and some leases contain clauses that are not legally enforceable, he said.

Since September, the Centers for Disease Control and Prevention [CDC] has added new protections for tenants to prevent evictions during the pandemic. But the latest CDC order, released on March 28 and applicable through June, only extends protections to tenants who suffered “substantial loss of household income … or extraordinary out-of-pocket medical expenses.” That doesn’t seem to apply to Barber.

Scholtz wrote that the eviction filing against Barber wasn’t driven by the rent.

“My client has completed major renovations in the building, and has plans to move forward with renovations of Ms. Barber's apartment,” he wrote, noting that her original lease was long over and included a clause allowing any new owner to tell her to vacate.

He added that Barber had been leaving objectionable voicemails, texts and social media comments, and “referring to my client and its employees as ‘slumlords’ and ‘heartless bastards.’” 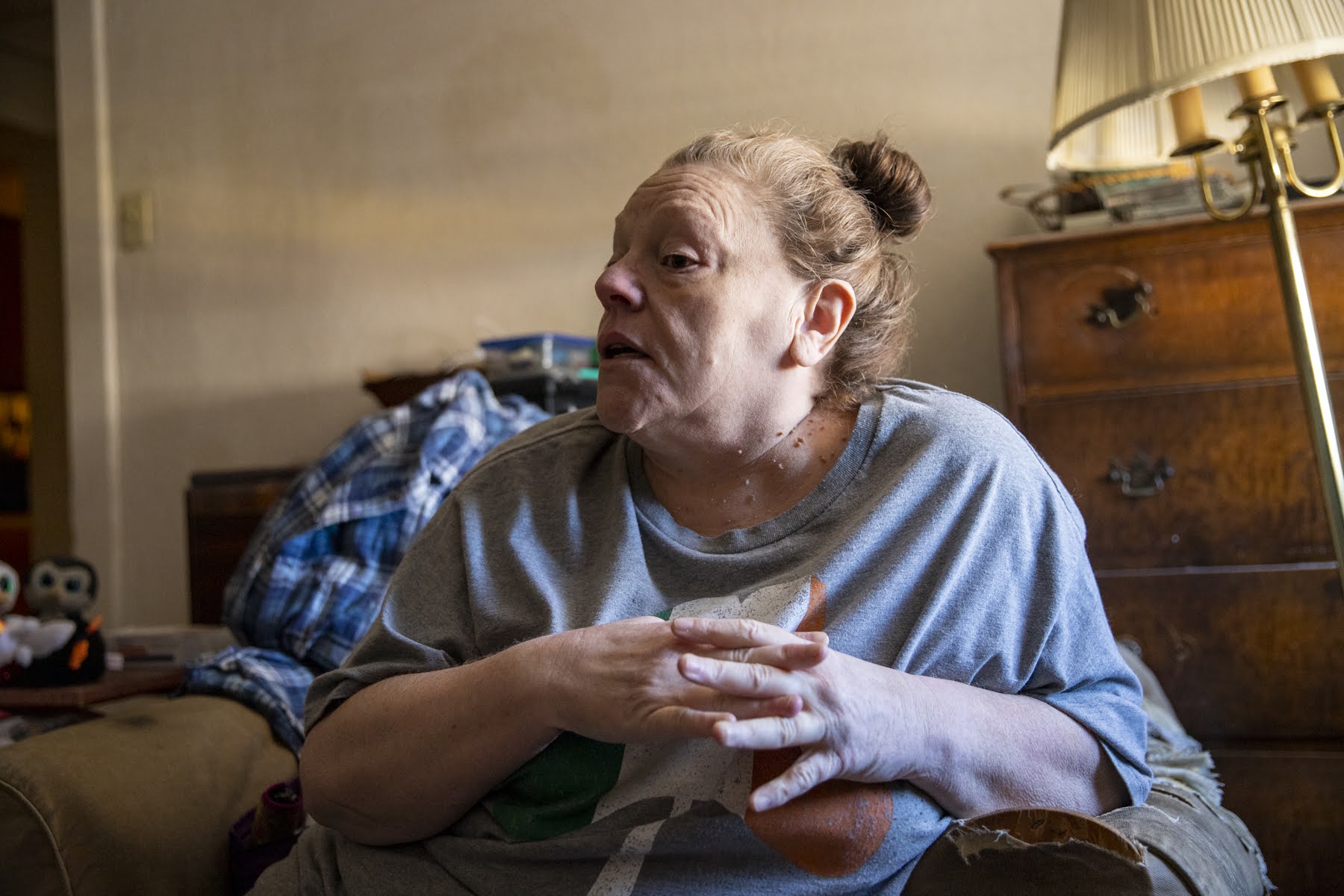 Mary Ellen Barber, 58, sits in the living room of her apartment in Avalon. The roof leaked in March rains. (Photo by Jay Manning/PublicSource)

Barber said the eviction has made her anxious, sleepless and irritable, and admitted that she leaves long voicemails.

“In my voicemail [to Nexus] last week, I said, ‘Look, if you could treat me like a human being, I would be nice to you. But you’re treating me like a piece of dirt, and I don’t appreciate it,’” she recounted. “‘I mean, you got your money.’”

Barber arrived at District Judge Tara Smith’s courtroom on March 9 with Julia Zebley, an attorney with Neighborhood Legal Services. For Zebley, the case was not novel.

"I have seen several of these situations where older tenants have been living in a place for a while, and there's a desire to renovate, and suddenly a new owner is trying to evict them under a lease that's several years old” and has been allowed to automatically renew for years, Zebley said.

That’s particularly problematic during the pandemic, she said.

COVID-19 case numbers were rising, Zebley noted, on a day in which the county reported 586 new cases. Barber "walks with a cane. She doesn't drive. ... Imagine trying to traipse through the city, or the county, and trying to find somewhere that takes your voucher" while trying to safeguard your health.

In court, the odds were against Barber and Zebley. A study by the Allegheny County Department of Human Services and The Pittsburgh Foundation found that from 2012 through 2019, tenants won just 1.5% of eviction cases, with landlords prevailing in 85%, and the rest withdrawn, settled or otherwise dismissed.

In Barber’s case, though, Nexus had given Barber 60 days to move, but had then filed to evict her two weeks before that deadline had passed. The judge said Nexus filed prematurely,  Zebley recounted later. Smith ruled in Barber’s favor. Nexus did not appeal.

Nexus could file again after April 30, as that is the anniversary of Barber’s 2016 lease signing, and thus a point at which it could arguably terminate.

This year through March, Nexus filed 10 eviction cases in Allegheny County, out of some 1,100 filed by all landlords.

Scholtz wrote that his client tries to avoid evicting people. Nexus, he indicated, has allowed tenants who lost income to defer rent. For some delinquent tenants, the company has written off overdue balances or even provided $500 to $1,000 checks as an incentive to move out. Nexus, he wrote, “lost tens of thousands of dollars during the pandemic.”

Housing counselors have been in contact with Barber, and she said some have urged her to consider moving to other parts of the county.

Barber, though, said her "doctors are all this way.” Plus she needs to stay close to her circle of friends. “I don’t get around too well by myself.” 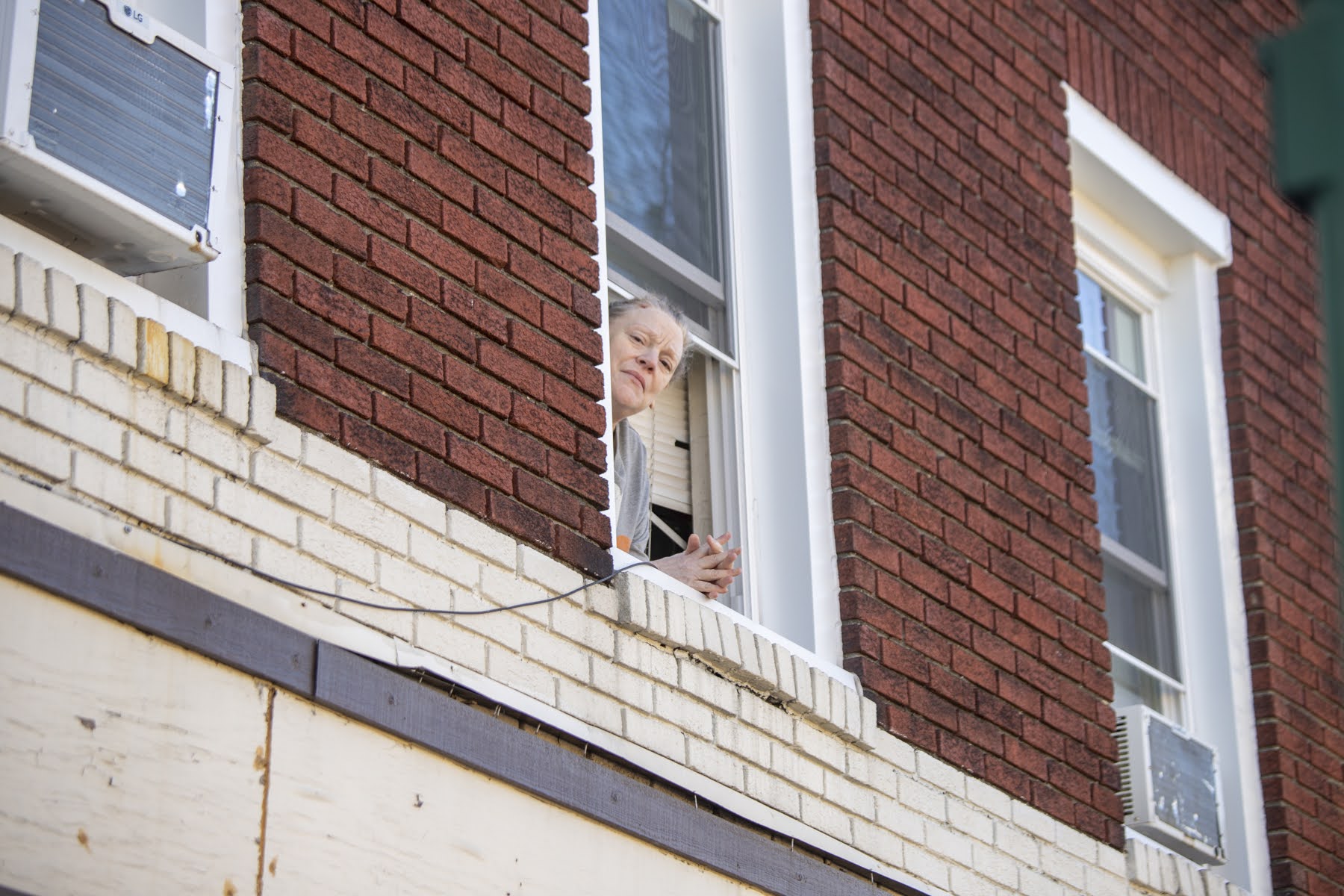 Mary Ellen Barber said she has been searching for a suitable apartment in the North Hills that would take a housing voucher as partial payment. She hasn't been able to find one. (Photo by Jay Manning/PublicSource)

Staying close may be hard to do.

There are particular parts of the county in which it is harder to find apartments that take vouchers, Longwell, of the Allegheny County Housing Authority, wrote to PublicSource. Those parts include Moon, Mt. Lebanon, Oakmont, Oakdale, Sewickley, Plum, "most of the South Hills" and "most of the North Hills,” she wrote.

On March 26, after a windy, rainy night, Barber rose to a reminder of the slow erosion of her situation.

“I woke up to water in my dish pan today and a bit of a wet floor in the hallway,” she wrote in an email to PublicSource.

On March 30, Scholtz wrote that Nexus had repaired the roof and Barber’s ceiling, and was planning a total roof replacement.

Barber still had a roof over her head, however imperfect it may have been. But she knew that her abode for nearly a decade was decreasingly viable. She just couldn’t find a better option.

“They want the apartment, and after months of trying to find a place to live that will take the Section 8, I don’t have another apartment to go to,” Barber said. “There is no magic cure for me.”

More Pittsburgh households now rent than own their homes, and landlords now control around 37% of the housing market countywide. COVID-19 is testing the health of this market, bringing eviction curbs, rent relief and a revived tenants’ rights movement. PublicSource and WESA are exploring these changes and examining the governmental and civic responses to the emergence of Tenant Cities.