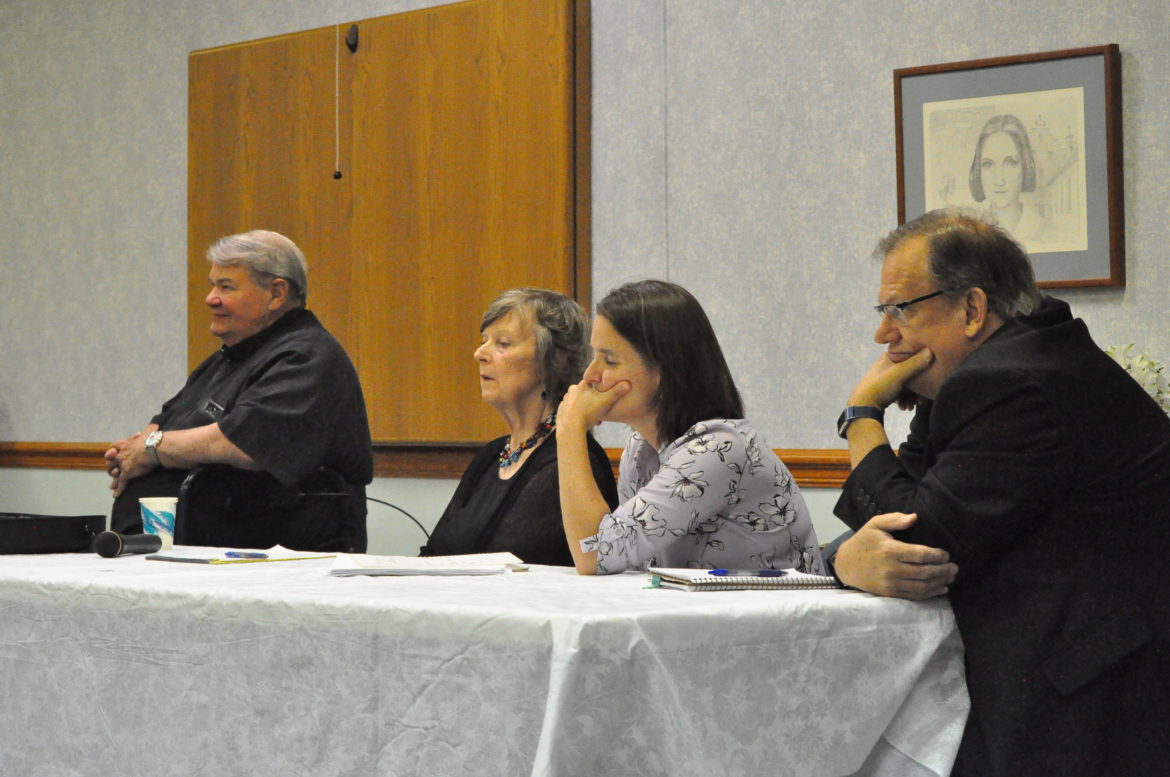 When Monsignor Jack Bendik first learned about parish mergers and closures in the Catholic Diocese of Pittsburgh, he thought, “I couldn’t believe it could be so dramatic. I was shocked that you were going from 188 parishes to 57. That’s almost obscene.”

Bendik spearheaded the merging of four parishes in Northeast Pennsylvania near Scranton —  building what he sees as a successful church community — and, on Monday night, he aimed to lift the hopes of about 70 people who gathered in Allison Park to learn about his experience with parish mergers and closures.

Bendik said he helped to create The Parish Community of St. John the Evangelist out of four parishes in Pittston, a Luzerne County city with a population of about 50,000. The new parish invested its resources into starting a free health clinic for the poor in 2007.

Bendik, who isn’t involved in the Pittsburgh mergers, attributed the success of the Pittston merger to the patience he and the parishioners exercised, the transparency of the process, and the commitment level of the churchgoers to ensuring the process went smoothly. He urged Pittsburgh Catholics to have the same mindset when thinking about their own mergers.

Some of the parishioners in attendance expressed concern about the local large-scale mergers.

In Pittsburgh, church officials and parishioners are grappling with the prospect of longer distances to Mass, vacant buildings and priests who will be moved from churches they’ve led for decades in some cases.

Ginny Zajac, who attends service at St. John Newman in the North Hills, is worried that the merger process is moving priests from their home churches.

“I think that was the experience that many parishes had with their pastors and priests,” she said. “They were used to them, they liked them, and then all of a sudden, they were gone.”

Since last year, five separate clusters of parishes were selected by the diocese of Pittsburgh to become a “grouping,” as the diocese calls them. Each has since merged to become a single parish. The five groups officially underwent mergers in July, blending between two and seven parishes each.

Read our previous stories on church mergers and concerns raised by parishioners.

In each merger, the diocese starts by choosing which parishes will become one. Parishes then figure out the merging process, with direction and help from the diocese, and finalize the merge on selected dates.

In January, the diocese plans to merge another 27 parishes into 8. In July  56 parishes will merge into 14. At that point, they will be close to halfway to their consolidation goal. The plan was given the name: “On Mission for the Church Alive!”

“We needed to address some structural issues and be able to look at the need to realign resources into different areas,” Diocese Chancellor Ellen Mady said in a phone interview about the goals of parish merging.

Church officials hope the process will lead to “renewal and revitalization,” Mady said.

Mary Swindal, pastoral associate of the Pittsburgh North Side Parish Grouping, said Pittsburgh is faced with depressing national trends that the church needs to contend with, including a shortage of priests and revelations of clergy abuse.

“We have this perfect storm going on of not just dealing with the merging, but also dealing with the effects of the abuse crisis, and the clergy shortage,” Swindal said. A year ago, a grand jury report alleged that the church protected hundreds of priests across Pennsylvania who were accused of abusing young people.

Bendik also sees the scandal as one reason pews are emptying.

“I think there’s a bigger issue,” he said. “We have a cultural issue about the loss of faith. People are allergic, in a certain sense, to being a part of community. …In this culture, at this time, individualism is rampant.”

The median age for American Catholic is 49, compared to a median age of 40 for non-Christian faiths and a median age of 36 for people without a religious affiliation, according to Pew Research Center.

Lois Campbell, president of the Pastoral Council of the Catholic Community of the East End of Pittsburgh, said the shrinking population of churchgoers is driving the need for merging.

“People are moving away from church,” she said, “and so we’ve got all these buildings — churches, schools, convents, rectories — and we have fewer people coming to church to pay the bills … and we have a smaller number of priests. It leaves people feeling like loose ends.”

Sharing the burden of change

The diocese determines which parishes should merge, but much of the merging process is up to the parishes themselves, or the “ground level,” as Mady calls it.

“I would say the diocese now is very much trying to support the ground level as they go through this process,” Mady said.

While there is a general template for how to bring parishes together, the secretary of parish services, Linda Ritzer, said there is no one-size-fits-all solution for the parishes to follow.

“We don’t want to have a cookie-cutter approach," she said in a phone interview.

As the diocese orchestrates and supports the churches from a higher level, the parishes themselves see to the nuts and bolts of bringing together disparate, fractured communities.

“I think the diocese is doing everything it knows how to do to get the priests and the parishes resources for all the administrative and management stuff,” Campbell said. 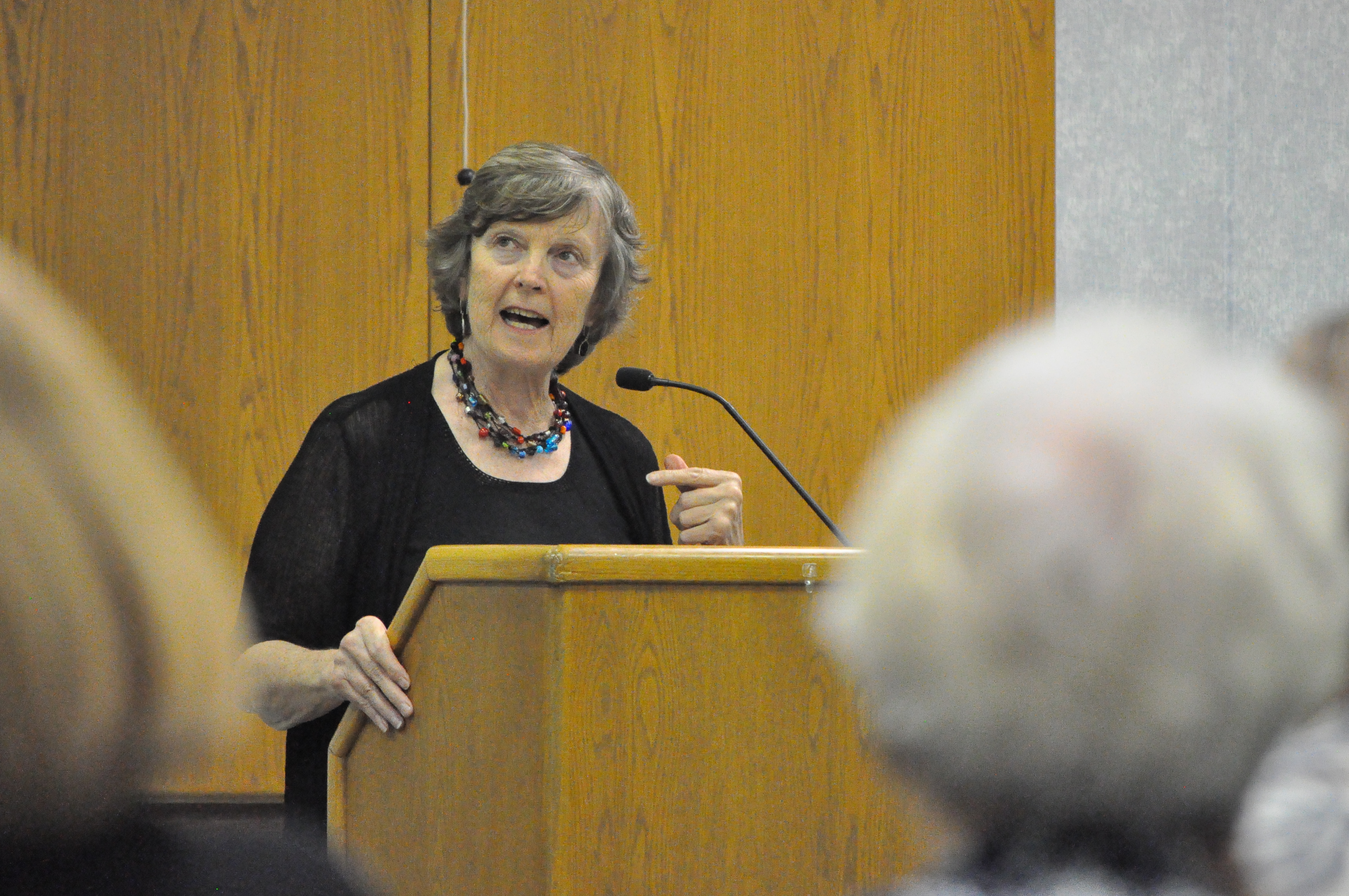 Lois Campbell, president of the Pastoral Council of the Catholic Community of the East End of Pittsburgh. (Photo by Kirkland An/PublicSource)

Campbell said that while the diocese is providing a roadmap to reach the goal of merging, when it comes to “the grieving, the working with people around loss,” the parishes are on their own — and it’s here that lay people like herself need to step up to provide comfort and care. Her own parish, St. James in Wilkinsburg, is in the process of a merger with St. Bede in Point Breeze. It’s also selecting a new name. The grouping is aiming to be among those that officially merge in January 2020.

Almade said that many American Catholics like himself can remember a time when Catholicism was better represented in the public sphere, including in politics. But it “just ain’t that way anymore,” Almade said at last night’s talk.

For Campbell, the process, though difficult, is a cause for hope. She said, “I think the Spirit is in the church, and if we move forward, it’s not going to die. I think it’s forcing us to be more dependent on each other and more dependent on God.”

Kirkland An is a freelance journalist. He can be reached at kirk@kirklandan.com.