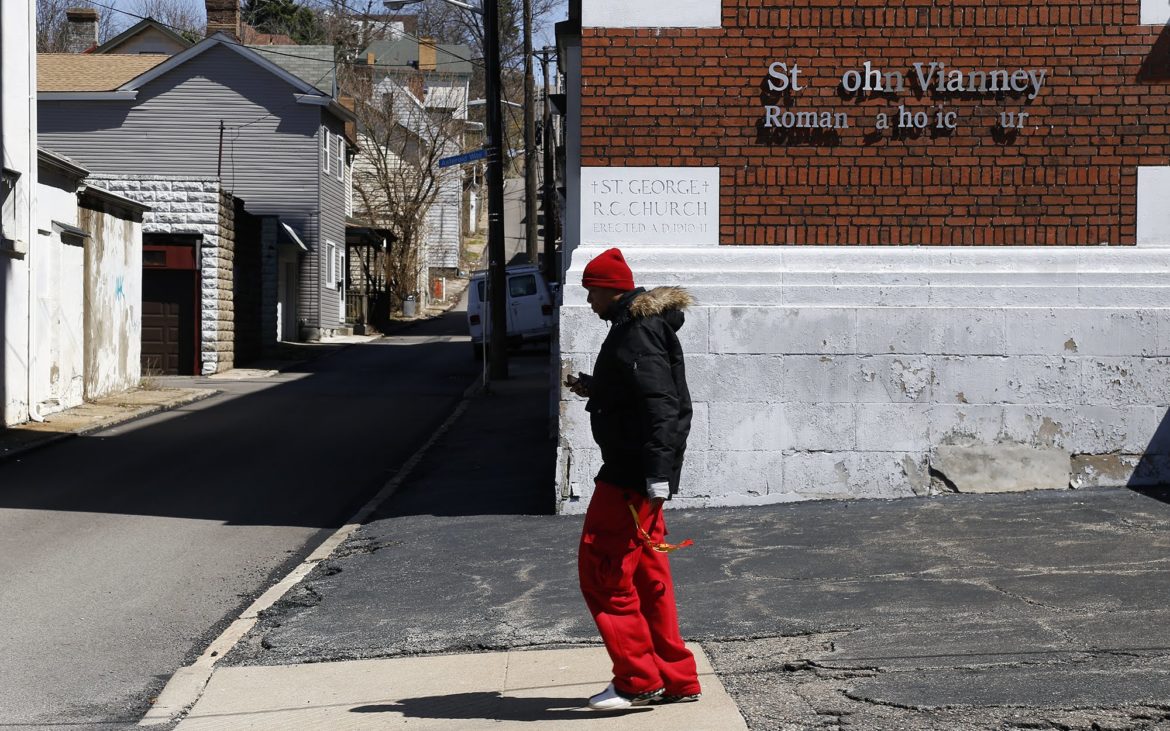 A person walks down Allen Street past the closed St. John Vianney Church in Allentown. The Catholic Diocese of Pittsburgh announced in January 2016 that the parish would be dissolved due to dwindling attendance and $3 million of debt. (Photo by Ryan Loew/PublicSource)

A bricklayer by trade, Neal Mehrenberg laments the dissolution of the Allentown church building that served as his family’s spiritual home for four generations.

The Catholic Diocese of Pittsburgh has diverted parishioners from the double-spired German Romanesque structure with stained-glass rose windows and plans to close it for good. The building's fate is uncertain.

“They don’t build places like that anymore,” said Mehrenberg, 40. “Nothing resembles an old church. You don’t get that back. Once it’s gone, it’s gone.”

St. George Church, completed in 1912 to serve an ethnic German congregation, was the center of his grandparents’ and parents’ community, hosting several crowded Masses each week. But by the time Mehrenberg married at the Climax Street church in 2010 and then had his son baptized, the diocese had closed three other parishes and folded them into his, renaming the parish St. John Vianney. Those parishes’ churches, schools and other buildings were sold off or torn down.

In January 2016, the diocese announced that St. John Vianney parish would be dissolved due to dwindling attendance and $3 million of debt. Parishioners were scattered to three other Hilltop parishes. Bishop David Zubik also decreed that the St. John Vianney church building be relegated from “sacred” to “profane” use. Under canon law, the windows and sacred objects should be removed when a structure is designated for “profane” use. The edifice can be repurposed or torn down. 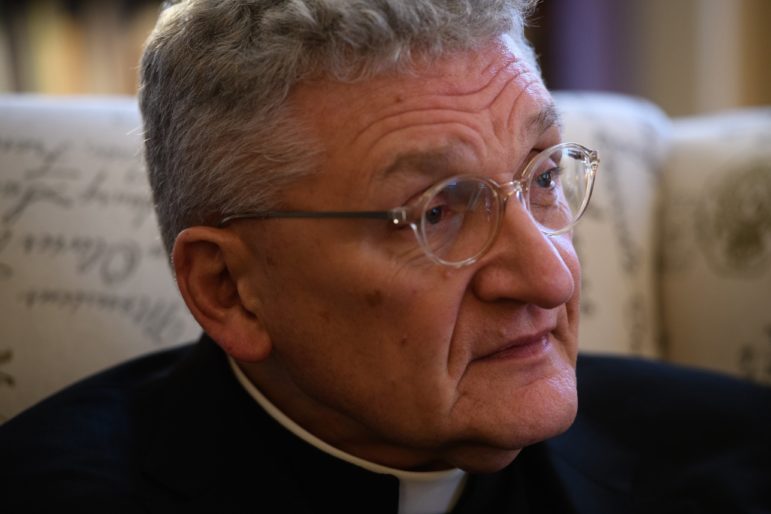 Bishop David Zubik has expressed concern about the efforts to save the St. George Church building in Allentown. “Well, to be honest with you, I worry about that because it has the potential to be divisive.” (Photo by Justin Merriman/PublicSource)

Unsatisfied with the diocese’s plans for the church building, several parishioners incorporated the nonprofit St. George Church Preservation Society in February 2016. The group proposed maintaining the building’s “sacred character” and then leasing it to host occasional Masses, weddings, funerals and community events. They envision the church becoming “more open to the community and neighbors,” said society president Bob Kress, who grew up in Allentown and headed the Allentown Civic Association for 17 years. In March 2016, the society filed an appeal to the Vatican, citing canon law that allowed for the closure of a church building only for “grave reason.”

Zubik has expressed concern about the society’s efforts: “Well, to be honest with you, I worry about that because it has the potential to be divisive.”

The parish did close, holding its final Mass in April 2016. St. Mary of the Mount in Mt. Washington took ownership of the church building. Meanwhile, the debt was forgiven, absorbed by the diocese.

“Every parish has the right to question and challenge what they’re going to do.” 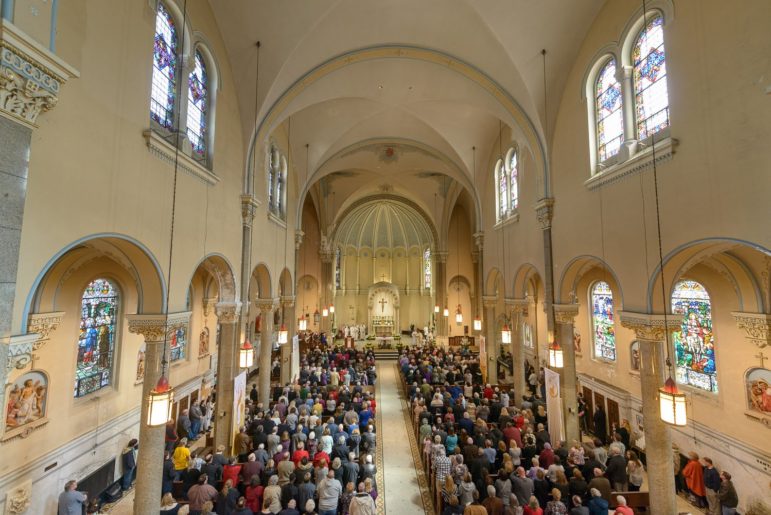 A photo of the closing Mass at St. John Vianney Church on April 3, 2016. (Photo courtesy of Bob Kress)

In September 2016, the society received news that it had won its appeal, thereby revoking the diocese’s decree to change the church building’s status. A few months later, parishioners met with diocesan leaders hoping to negotiate an arrangement to reopen the church. Zubik, however, said the appeal won on a procedural technicality.

The pastor of St. Mary of the Mount, the Rev. Michael Stumpf, consulted with his own parish pastoral council and financial council, who were in support of closing St. John Vianney. So Stumpf recommended, and the bishop again decreed, that the building be closed. The society appealed that decree in August 2017.

Zubik said the society’s efforts aren’t based upon a sustainable vision for the future. “They’re living out of nostalgia. Nobody is going to argue that St. John Vianney isn’t a beautiful building, but it takes more than a few bucks to keep that going.

“We really need to be able to work together to see what we're doing in terms of, first of all, building the faith community and then being able to support those resources that can help the faith to grow.”

St. George Church (now called St. John Vianney) is a casualty of trends affecting the entire six-county Catholic Diocese of Pittsburgh. Though the diocese includes more than 600,000 Roman Catholics, only about 150,000 people attend Mass on a given week, a 40 percent decrease since 2000. Additionally, the diocese faces a shortage of priests and half of the parishes run operating deficits. 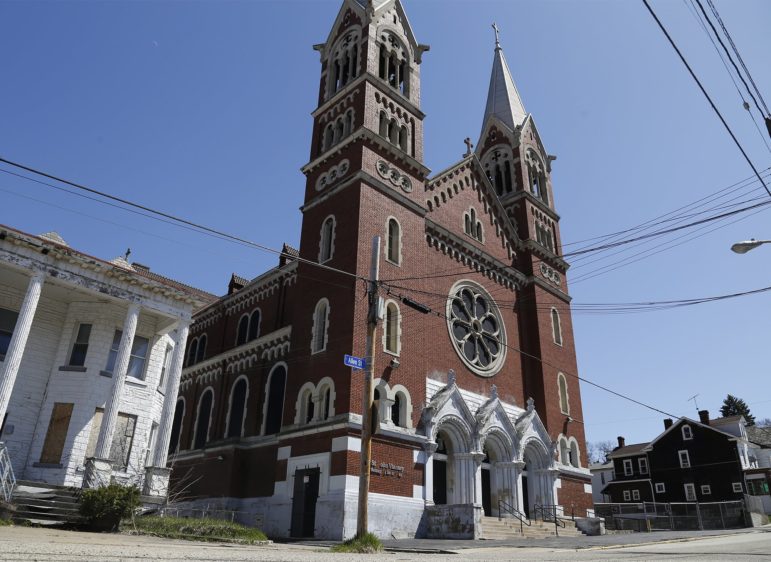 In January 2016, the Catholic Diocese of Pittsburgh announced that St. John Vianney parish would be dissolved due to dwindling attendance and $3 million of debt. Parishioners were scattered to three other Hilltop parishes. (Photo by Ryan Loew/PublicSource)

To address the decline, the diocese launched the “On Mission for the Church Alive!” strategic planning process in 2015. In September 2017, the On Mission Commission made recommendations to reduce the number of parishes from 188 to 48. Final decisions will be announced April 26, after which each new parish will undertake a multiyear analysis to determine which buildings they should maintain or close*.

Kress pointed out that parishioners are following Vatican guidelines by filing appeals. “Every parish has the right to question and challenge what they’re going to do,” he said. “The church has its process set up and a lot of times ... people don’t know that.”

Sticking points between the diocese and the society on the Allentown church building include needed repairs, which the diocese estimates would cost $1.1 million. The society produced a plan to reduce that figure to about $600,000 through value engineering, choosing different contractors and prioritizing repairs or even forgoing those that aren’t critical, like padding on pews. Kress said that with support from the “St. George family” — former parishioners, parish school alumni and others, including those now living outside of Allentown and even Pittsburgh — the society has raised $150,000 in cash and pledges toward repairs, and the society’s contact list has grown to 1,300 people.

"Nobody is going to argue that St. John Vianney isn’t a beautiful building, but it takes more than a few bucks to keep that going."

Earlier this month, the society submitted a proposal to have the diocese deed the church to them. The way Kress sees it, whether through a sales agreement or a triple-net lease (in which the nonprofit would take on all operating, insurance and maintenance costs), the diocese has nothing to lose.

Society members are waiting on the Vatican’s decision on its second appeal.

Aaron Sukenik, executive director of the Hilltop Alliance, wrote in an email that the building is significant for the community, too.

Though Mehrenberg now lives in Whitehall, his mother still resides in his childhood home just a few blocks from the church.

“Allentown is trying to completely do a one-eighty of the area,” he said. “If [the diocese were to demolish] it, what would you have then? Maybe a 7-Eleven or something? ...Once they make their decision, they’re not going to want to backpedal on what they decided already, which is a shame.”

*Update (4/29/2018): The Catholic Diocese of Pittsburgh announced on Saturday, April 28, how its 188 parishes would be grouped into 57 new, multisite parishes. The diocese had originally proposed there would be 48 groupings. The diocese also shared which priests and deacons would be assigned to the new groupings. According to the diocese press release, the groupings are expected to merge into new parishes between 2020 and 2023. A complete listing of parish groupings, clergy assignments and other information is available at onmissionchurchalive.org.

This story was fact-checked by Abigail Lind.

Melissa Rossiter is pursuing a doctoral degree in Community Engagement at Point Park University. She can be reached at marossi@pointpark.edu.