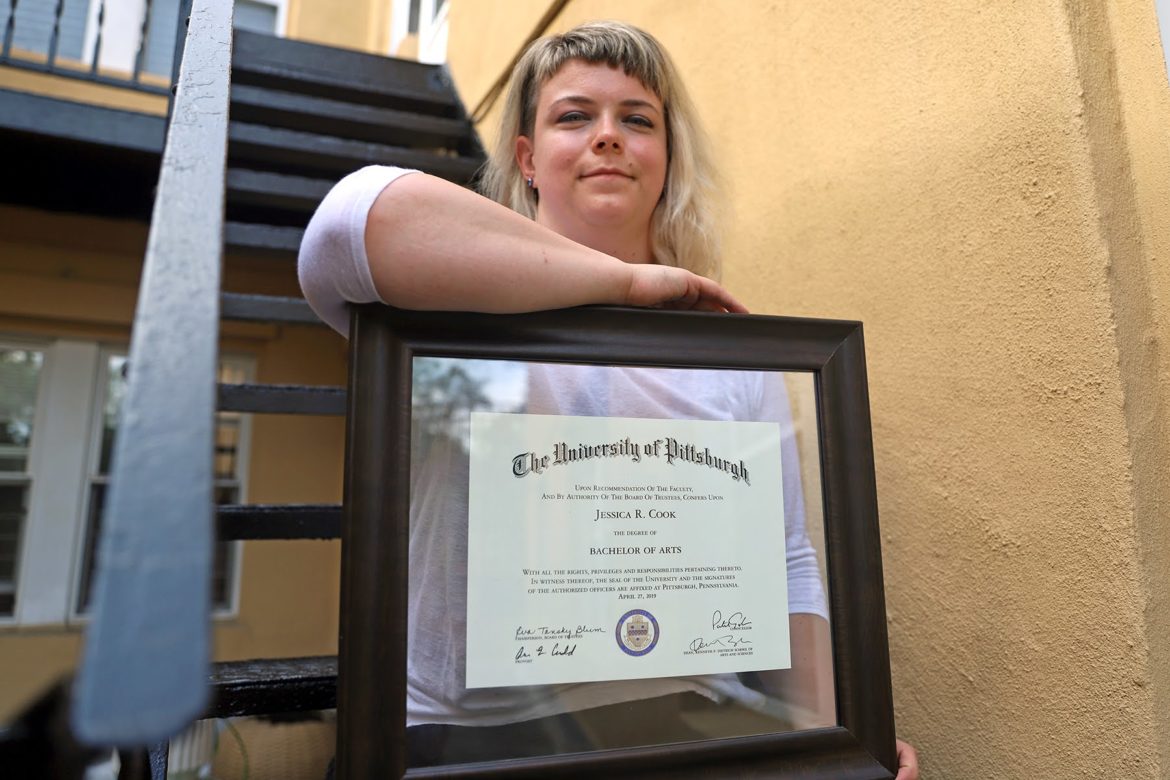 Jess Rohe-Cook holds her degree from the University of Pittsburgh outside of her home in Squirell Hill. (Photo by Jay Manning/PublicSource)

Jess Rohe-Cook was tired of waiting tables for a living and decided to go back and finally finish college at age 26. She got her degree in the University of Pittsburgh’s politics and philosophy program, hoping to leave restaurant work for good.

After graduation in April 2019, she experienced a year of struggling to find work in community development or public service, and then encountered an even bigger problem: The coronavirus crisis brought the economy to a halt.

“I feel like I was living in a broken system before all this happened,” Rohe-Cook said. “I was working a ton, barely able to scrape by. I feel like that was really good practice for the situation now.”

Rohe-Cook is one of countless Pittsburgh-area residents undertaking a career transition or entering the job market while facing an environment far more challenging than they expected. Unemployment nationally is its highest level since the Great Depression and Pittsburgh’s mainstay employers in education and health care may not be immune.

Rohe-Cook picked up a part-time job in December as a Pittsburgh 311 line representative, hoping to use it as a crash course on how the city operates and a foot in the door for full-time work.

Then came coronavirus, and now the city has a hiring freeze and is projected to lose 25% of its revenue.

Lamar Kendrick, a 35-year-old who lives in the South Side with his wife and two teenage sons, lost both of his jobs as a cook due to the COVID-19 shutdown. He’s collecting unemployment and relying on savings to get through, but he’s worried that his court record will hurt his job prospects.

He was convicted of third-degree murder in 2004 after participating in a botched robbery at age 20 that left a pizza delivery driver dead. “I was young and I am not the same person,” he said, and now he’s focused on providing for his family. “I see this as a second chance in life to make a difference.”

Kendrick added: “I just keep looking for opportunities and every time I turn around it seems like doors just shutting in my face.”

His sons handled the shutdown well, he said, but they’re eager to go back to school. He and his wife are worried about paying the bills and about their kids’ well-being.

“Paying the bills, trying to keep a roof over my family’s head,” Kendrick said. “I’m worried about them. Those are my world right there, all three of them.”

Relief for Rohe-Cook, Kendrick and others struggling to find work will depend on the path the region’s economy takes in recovering from the coronavirus crisis — and economic experts uniformly say that it’s impossible to predict the way forward at this point. They agree that consumer confidence will dictate recovery.

"The real question is what happens in the longer term once the public health concerns abate, which I can't predict when that'll be," said Chris Briem, an economist at the University of Pittsburgh. 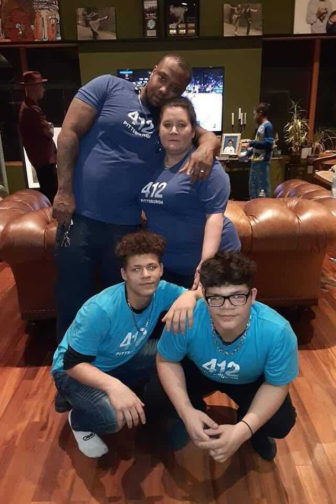 Lamar Kendrick with his wife Toni and sons Isaac (front left) and Leroy (front right). “Paying the bills, trying to keep a roof over my family’s head,” Kendrick said. “I’m worried about them. Those are my world right there, all three of them.” (Courtesy photo)

Mekael Teshome, vice president and senior regional officer of the Federal Reserve Bank of Cleveland, said the region’s recovery is dependent on “how the virus evolves.”

In Allegheny County, the reported spread of COVID-19 has slowed, but new cases and deaths continue to occur. To date, the county has reported around 2,000 confirmed cases and 168 deaths.

Jayne Shrum was recently informed that she’ll be laid off from her job as a business analyst after almost four years on June 1. She worked for SDLC Partners and has been contracting for Highmark. So far, a wide-ranging job search over the past month has had no results.

“A lot of professional job postings right now, they seem like they’re stagnant,” said Shrum, 27, who lives in Castle Shannon. “You go on Indeed or LinkedIn and you see a job posting, they’ve been up for like 30 days and they have a ton of applicants.”

She said she’s worried about paying the bills, especially once the temporary $600-per-week additional unemployment benefit stops coming after July 31. She said she’s received more scam interview offers that are more like sales pitches than legitimate responses from employers.

As many local workers are facing a mid-career crisis, newly minted graduates are suddenly unsure what the future holds. Nicole Tobias, who just graduated from Waynesburg University with a degree in public relations, has moved back in with her parents and is idle for the time being.

“Coming out of college, you’re hoping to have a job lined up as soon as you walk across that stage for commencement,” said Tobias, 22. “And none of that happened.”

The federal government paused student loan payments for six months, so Tobias doesn’t have to worry about that for now.

“But I think it’s a little concerning when those six months come by, just to see whether I’ll have a job or not that can help me pay for that,” she said.

Some businesses reopened in the governor’s “yellow phase” and more will likely reopen with Allegheny County’s “green” designation, which the county entered June 5. But the driver of recovery will be consumers’ actual resumption of spending, Teshome said. As long as consumers are staying home, it doesn’t matter if businesses flip their window sign to “open.”

“There’s a lot of concern that even as businesses reopen, customer demand may not recover as quickly,” Teshome said. “Consumers have to feel confident in going out and spending. As a result, I think the recovery will be very slow.”

According to surveys by the Cleveland Fed, 67.6% of consumers on June 2 reported refraining from planned large purchases. That figure was 40% on March 10.

How do consumers feel about the future? On June 2, 76.2% of consumer respondents said they thought the pandemic would last a year or longer.

“There’s fear that without a vaccine or adequate testing, households don’t feel safe going out and purchasing, then it’s going to be a very drawn out recovery,” Teshome said.

"My bottom-line answer is there's certainly a lot of uncertainty at this point about what the long-term impacts will be."

The survey includes responses from 312 businesses in Southwestern Pennsylvania. It asked businesses when they expect to be fully reopened, and respondents could choose more than one answer: 18% said “whenever it is safe;” 54% said they will reopen once employees have the information needed to follow safety protocols at work; 42% said they will require broad availability of personal protective equipment before reopening; and 36% said they will wait for a long-term downward trend in cases.

“It would be perfectly understandable that businesses struggling through the closure and worried about their own bottom line would just open the minute they can open,” Krekanova said. “But they’re really taking this pause and saying, ‘OK, I need to be thinking about the bigger picture.’”

Despite closed businesses and mass unemployment, both Briem and Teshome cautioned that comparisons between the current economic situation and the 2008 financial crisis or the collapse of the steel industry don’t add up.

Teshome pointed out that the 2008 crisis was caused by imbalances in the economy, while the current crisis is a result of public policy that purposely limited economic activity.

Briem said the biggest problem caused by the collapse of the steel industry in the 1980s was that people, particularly young people, left the region to find work elsewhere. Now, the entire country is facing record unemployment, so it’s unlikely people will flee to find work elsewhere in large numbers.

"My bottom-line answer is there's certainly a lot of uncertainty at this point about what the long-term impacts will be,” Briem said.

Pittsburgh may be in a better position than some regions because of its relatively low reliance on hospitality jobs compared to places like Orlando and Las Vegas. But the 1.2 million hospitality jobs in Southwestern Pennsylvania could be slow to recover because it could be a long time until professional sporting events draw people into the region, and suburbanites may telework instead of commuting to work and patronizing restaurants and stores nearby.

But even Pittsburgh’s universities and medical systems, which have been key to its prosperity in the post-steel era, aren’t fully protected from the coronavirus downturn. Colleges nationwide are expecting a decrease in enrollment and revenue. The Pittsburgh Post-Gazette reported on April 22 that statewide losses for hospitals could exceed $10 billion, mostly due to a decline in elective treatment and an increase in uninsured patients due to job losses.

Teshome said a down year for universities and hospitals could have a negative impact on the talent pipeline for years, with potentially fewer people receiving training for healthcare jobs.

People in the region are thinking about their future in new ways. 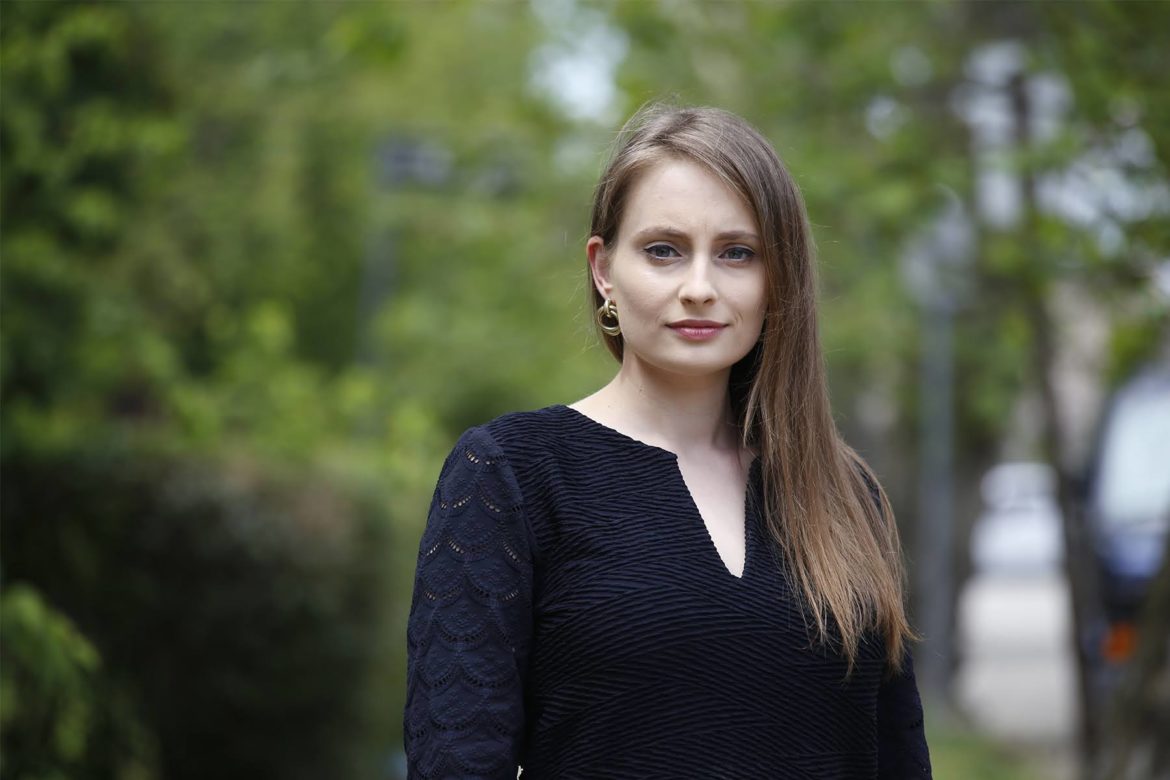 “The perfect stepping stone got placed in front of me, and I stepped on it,” said Sarah Schreck. “And then it went away.” The 24-year-old had a summer job lined up at a prestigious theater festival, but it was canceled. (Photo by Ryan Loew/PublicSource)

Sarah Schreck, 24, just got a graduate degree from Carnegie Mellon University in arts management. She wants to work for a theater company, but now she’s thinking about how she can use her skills in a world where theaters are shut down by the pandemic.

She had a summer job lined up at a prestigious theater festival, but it was canceled.

“The perfect stepping stone got placed in front of me, and I stepped on it,” she said. “And then it went away.” How to move forward? “It’s finding ways to still serve the arts ... and use our skills, but perhaps in a slightly tangential way,” Schreck said.

Tobias, fresh out of Waynesburg University, is filling her jobless days by doing free webinars and certification courses online, trying to prepare as much as possible for the day companies start hiring more.

For Rohe-Cook, this crisis is less of a new predicament than the cementing of an old struggle to find fulfilling work.

“From my perspective, it feels like something really big has to change going into the future,” Rohe-Cook said. “I tried to make all these plans and do all these things to move forward in my career. I’m still trying to figure out what that would be. Now the future’s totally unknown.”

Charlie Wolfson is a freelance reporter in Pittsburgh and a senior journalism student at Northeastern University. He can be reached at wolfson.ch@gmail.com.