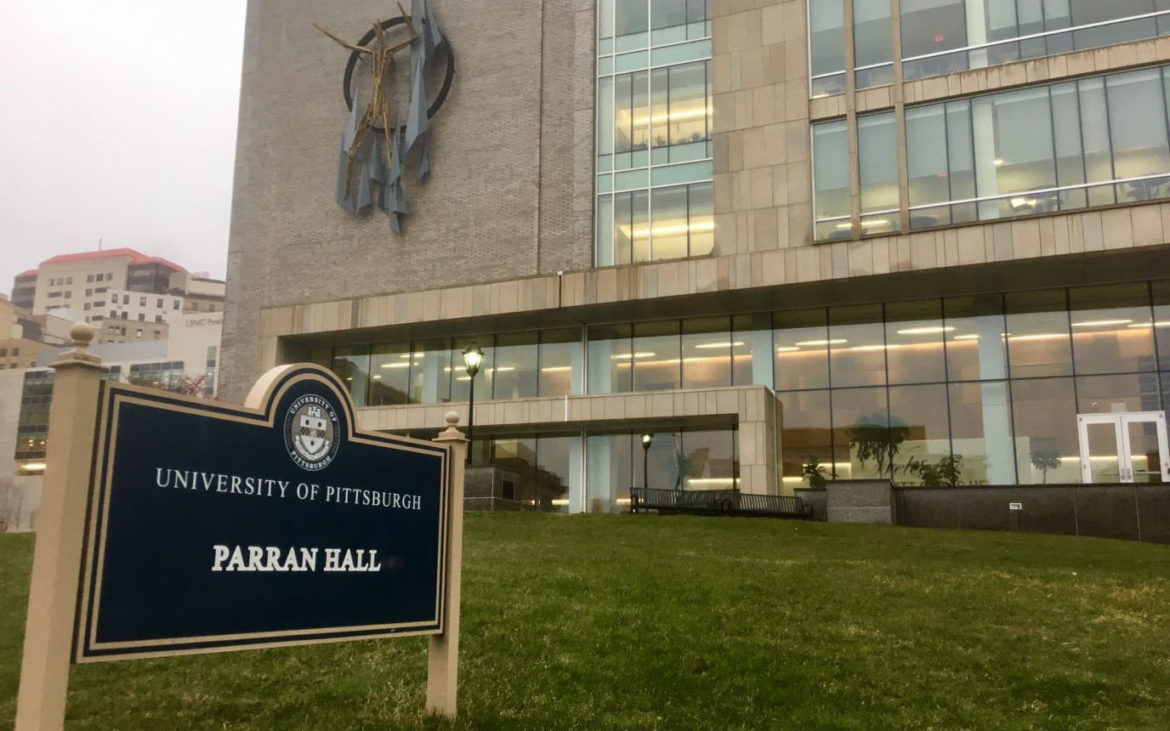 Dr. Thomas Parran Jr. is a public health icon with a legacy marred by unethical behavior. The University of Pittsburgh is considering if Parran Hall should be renamed. (Photo by Mila Sanina/PublicSource)

Update (6/29/2018): The University of Pittsburgh’s Board of Trustees voted on Friday to remove the name of Dr. Thomas Parran Jr. from its public health building, Parran Hall. This move follows a recommendation from Pitt Chancellor Patrick Gallagher and calls by a special committee, students and the dean of the Graduate School of Public Health. Parran’s legacy includes ties to racist and unethical medical experiments, specifically the Tuskegee Syphilis Study and a similar unethical study in Guatemala. A new name has not been selected.

In its report, the committee explains that Parran’s involvement in the Tuskegee syphilis study and a similar study in Guatemala are “not entirely clear.” However, the committee found that the experiments, which caused “ongoing human suffering,” were “fundamentally at odds with the University’s core values, including the values of integrity, excellence, diversity and inclusion.”

Earlier this year, Dr. Donald Burke, dean of the Graduate School of Public Health, asked Pitt’s Office of Diversity and Inclusion to review the issue. Student activists meanwhile petitioned to have the name changed. The committee recommends that Gallagher remove the name through a Board of Trustees resolution. Parran Hall was named in 1969.

Update (3/29/2018): If a building is named for a person tied to troubling ethical lapses, should the name be changed? Would renaming Pitt’s Parran Hall do enough to address the wrongdoing of the man who founded the public health school 70 years ago?

In a packed ballroom of more than 100 students, faculty and community members at the University of Pittsburgh, scholar Greg Dober today read a few of Dr. Thomas Parran Jr.’s words, showing glaring ethical lapses and seeming to put him as the inspiration for the infamous Tuskegee syphilis study.

While digging through archival papers, Dober found a memo where Parran singles out Macon County, Ala., as the “ideal location” to study the impact of syphilis on the black population “uninfluenced by treatment,” explaining that the study — which began eight months later — could be done with a group of “untreated” subjects.

Before the discovery of penicillin as a treatment, syphilis was deadly. Yet hundreds of black men served as test subjects in a 40-year experiment for which Parran served as the clear inspiration, Dober said. In that period, researchers failed to give them new treatment and did not inform them that the goal of the study was to catalogue the harms of untreated syphilis on human subjects.

“Without Thomas Parran...there never would have been a study,” said Dober, an author adjunct professor of Lake Erie College of Osteopathic Medicine.

In January, Dean Donald Burke, current head of the Graduate School of Public Health cited Dober’s work in a letter asking Pitt to review whether having a building named in Parran’s honor is consistent with the school’s mission. A student petition to remove Parran’s name followed.

Burke called the Thursday symposium the start of a process to publicly answer questions about the issue, but he assured the crowd that the school would “get it right” when making a final decision.

Bill Jenkins, a professor of public health sciences at Morehouse College, managed the government program to provide healthcare to survivors of the Tuskegee study. He cautioned the crowd against distancing themselves from sins of the past.

Wellesley College history professor Susan Reverby, who also spoke Thursday, said she’s concerned that removing Parran’s name would be a knee-jerk reaction so people can feel like justice was done without actually examining the structural racism that allowed the Tuskegee and Guatemala studies to happen.

“I’m worried deeply about the focus only on individuals and not the system,” Reverby said.

Pamela Connelly, Pitt’s vice chancellor for diversity and inclusion, said a committee founded to address the Parran Hall controversy is taking input from the community and experts, and she believes the process must be “thoughtful and thorough” rather than based on a single perspective.

“We’re really getting excellent widespread input from people in the community already,” said Connelly, who chairs the 15-person committee composed of faculty, staff and students.

The public is encouraged to submit their thoughts via email to diversity@pitt.edu with “attention ODIRC re: Parran Hall” in the subject line.

Barely a half-mile from the controversial monument to Pittsburgh-born Stephen Foster — set for removal after being criticized for honoring racism — stands Parran Hall.

The University of Pittsburgh building is named after Dr. Thomas Parran Jr., a public health icon whose legacy is irrevocably tied to racist, unethical medical experiments.

On Thursday afternoon, the University of Pittsburgh Graduate School of Public Health plans to hold a discussion about the wrongdoing by Parran, the school’s founding dean, as the university considers if his name should be removed. Students have petitioned to have his name pulled from Parran Hall, and the school’s current dean has raised similar concerns about his predecessor.

Parran, who served as U.S. surgeon general from 1936 to 1948, was once lauded as a progressive champion for public health initiatives, including the research of sexually transmitted diseases and advocacy for universal health care. But his achievements are marred with deep moral failings in pursuit of scientific advances.

Beth Shaaban, a student organizer and a public health Ph.D. candidate, said keeping Parran’s name on the building goes against the values of modern public health.

“We’re trying to improve the health of any community that we’re working in. We’re trying to reduce health inequity,” she said, “and all of this is flouted” by keeping his name.

As surgeon general, Parran oversaw the Tuskegee Syphilis study, an infamous 40-year experiment during which hundreds of black men in Macon County, Alabama, were denied effective treatment for syphilis because researchers wanted to study the effects of the disease on humans who weren’t treated. Several of the subjects died and many unknowingly passed the disease to wives and children, even though penicillin had been identified as an effective treatment in the late 1940s.

The symposium on Thursday, March 29, begins at 2:30 p.m. in Ballroom A of the University Club, 123 University Place on Pitt’s Oakland campus. The audience will have a chance to ask questions. 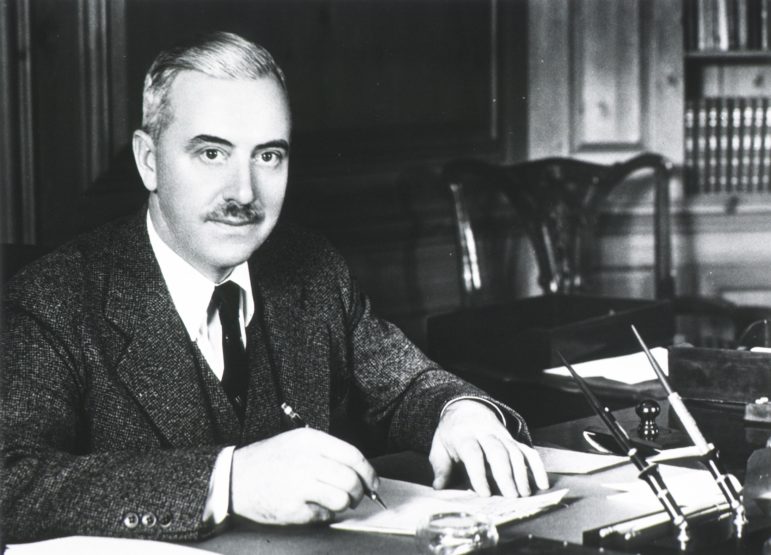 A petition circulated by Shaaban and other student organizers describes the study as “the exemplar of an unethical study and as a particularly ugly, racist, and troubling episode in the history of medical experimentation.”

Shaaban describes it as a common example used to instruct public health students about what not to do in research, and yet Parran’s name is on a building where such instruction takes place.

Current Dean Donald Burke has raised the concern to the Pitt’s administration.

Burke describes the Tuskegee study as “one of the most notorious violations of human rights” in the history of medical research in the United States and also cites similar experiments linked to Parran in Guatemala. Those experiments from the 1940s involved soldiers, prisoners, prostitutes and mental patients who were intentionally infected with syphilis without consent. Documents describing the experiments were discovered in papers left to the University of Pittsburgh by Dr. John Cutler, a former Pitt professor who conducted the experiments.

Students and community members can also submit input to diversity@pitt.edu with “Parran Hall” in the subject line.

Parran presided over the Pitt’s school of public health for a decade, starting in 1948. His career includes many high points. In 1936, he appeared on the cover of Time Magazine, and in his letter, Burke notes that Parran played an active part in drafting the Social Security Act and in the founding of the World Health Organization.

Parran’s role as top official of the federal Public Health Service during the Tuskegee and Guatemala experiments is undeniable, but he had also been a fierce advocate of research to cure sexually transmitted diseases. Author Allen Hornblum wrote last year that his colleague Greg Dober found evidence that Parran was not only a supervisor who secured funding for the Tuskegee study and never tried to shut it down, but he was also the “intellectual inspiration.”

Hornblum uses Parran’s own words to show that he thought the black population of Macon County would be perfect for the syphilis study:

“If one wished to study the natural history of syphilis in the Negro race uninfluenced by treatment,” Parran wrote in January 1932, “this county would be an ideal location for such a study.”

Dober will give a history of Parran’s work at the Thursday symposium.

Also speaking will be Susan Reverby, a professor of history at Wellesley College and an expert on the Tuskegee and Guatemala studies.

Reverby, who uncovered evidence of the Guatemala studies in previous research, said she thinks Parran’s name should be stripped from Parran Hall, but she fears that simply removing the name isn’t enough because it allows history to be forgotten without examining Parran’s actions and how he and others could engage in such ethical lapses.

“We totally forget about it and we move on. So what did we learn? Absolutely nothing,” said Reverby, who favors putting up a plaque to explain why the name was removed.

In 2013, the American Sexually Transmitted Disease Association decided to rename its “Thomas Parran Award” for lifetime achievement in research to the "The ASTDA Distinguished Career Award."

While the Tuskegee and Guatemala experiments show racism and disregard for life in the history of the public health field, their impact is ongoing because many in the minority community distrust modern institutions because of failings in the recent past. The Tuskegee study did not end until 1972, after it was exposed by a whistleblower.

“The overriding concern is what’s happening here and now and how do we address basically the systemic medical racism,” Shaaban said.

In response to Burke’s January letter, the University of Pittsburgh formed a review committee composed of staff, faculty and students nominated through the school’s Senate Council.

The committee welcomes community input and is expected to make a recommendation in about 60 days.

Neither Burke nor Pamela Connelly, vice chancellor for diversity and inclusion, was available for an interview on Monday.

“The committee’s work, which is in the research and fact gathering phase, will be grounded in scholarship, academic excellence and institutional values of equity, diversity and inclusion,” Connelly said in a statement to PublicSource.

Parran Hall is near a monument to Pittsburgh-born Stephen Foster, a 19th-century musician revered for his folk melodies who has also been criticized for writing songs associated with racist minstrel shows. The statue itself depicts a racist caricature of a black man.

The City of Pittsburgh has decided to move the statue and hopes to replace it with a statue honoring a black woman who has made an impact on the city.

The student petition similarly suggests alternatives to Parran, including Dr. Herbert Needleman, known for his foundational research on lead poisoning in children, or Maud Menten, a trailblazer in the field of enzyme kinetics and histochemistry.

“We want that to be representative of the best of us, not a reminder of reasons why, in the past, the community should be wary of working with us,” Shaaban said.

Jeffrey Benzing is a PublicSource reporter. He can be reached at jeff@publicsource.org or on Twitter @jabenzing.