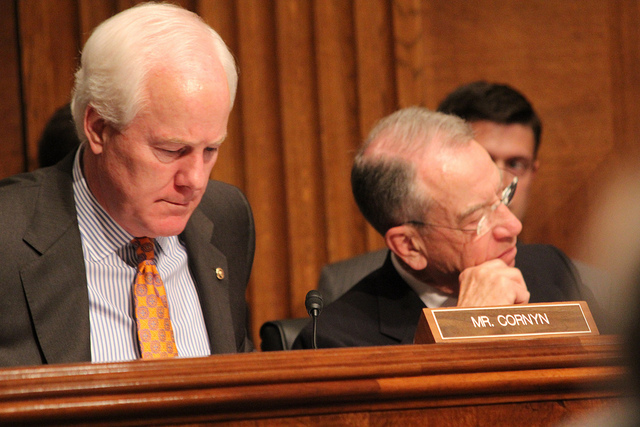 There’s been a lot of talk about prison reform in Washington, oddly making it one of the few issues with bipartisan support.

The basic idea is that decades of “tough on crime” enforcement have left us with overcrowded and costly prisons. Unless the justice system changes, those prisons will stay full and expensive to the taxpayer.

But unless a bill clears Congress (and the president), the system stays as is.

Now that Sen. Charles Grassley (R-Iowa) has the reigns of the Senate Judiciary Committee, proponents see some new hurdles, as the National Journal reports.

[L]ike many conservatives who came to power in an era when Republicans branded themselves as the "tough on crime" party, Grassley has made it clear that he sees the steady reduction in violent crime in the United States over the last 30 years as a direct reflection of more-effective policing strategies. And he believes that mandatory minimum laws that ensure criminals stay locked up have been key to that progress.

Grassley vehemently opposed the Smarter Sentencing Act, which last year passed the committee he now heads. He cites the need to punish drug offenders with long sentences because of the violence tied to trafficking heroin and cocaine.

The bill, which never got a floor vote, would have reduced mandatory minimums in certain drug cases. Proponents like Holder say long sentences in non-violent cases swell prisons without a clear benefit to public safety.

Grassley argued that supporters of the bill fail to see drug trafficking as inherently violent.

So does Grassley’s tough approach mean there won’t be reform?

That remains to be seen, but a bill from Sen. John Cornyn (R-Texas) could offer a path forward, the story said.

Grassley previously supported that bill, which focuses on re-entry for inmates after serving their sentences and in some cases allows them to serve the end of their sentences outside of prison.

Some advocates say real reform won’t happen if a bill doesn’t address mandatory minimums. But even if Cornyn doesn’t propose those changes directly, the issue isn’t off the table.

That bill could be the opening advocates are looking for: In a more open Senate where Majority Leader Mitch McConnell allows hosts of amendments, it's likely that mandatory minimums wouldn't be shut out of the process, regardless of Grassley's position. Even if mandatory minimums, a piece of the legislation that was once hailed as a bipartisan bright spot in an otherwise obstinate Congress, looks like it may be moving to the back burner, it still has a path forward, too.

As the National Journal notes, Grassley may be more flexible than expected with future legislation.

"He knows some changes need to be made,” Sen. Jeff Flake (R-Ariz.) said in the story, “but it does influence how far you can go if the chairman stands opposed."

Prison overcrowding is both a federal and local issue, with many states — including Pennsylvania — struggling with overcrowded and expensive prisons.

The federal Bureau of Prisons has 11 facilities in Pennsylvania.