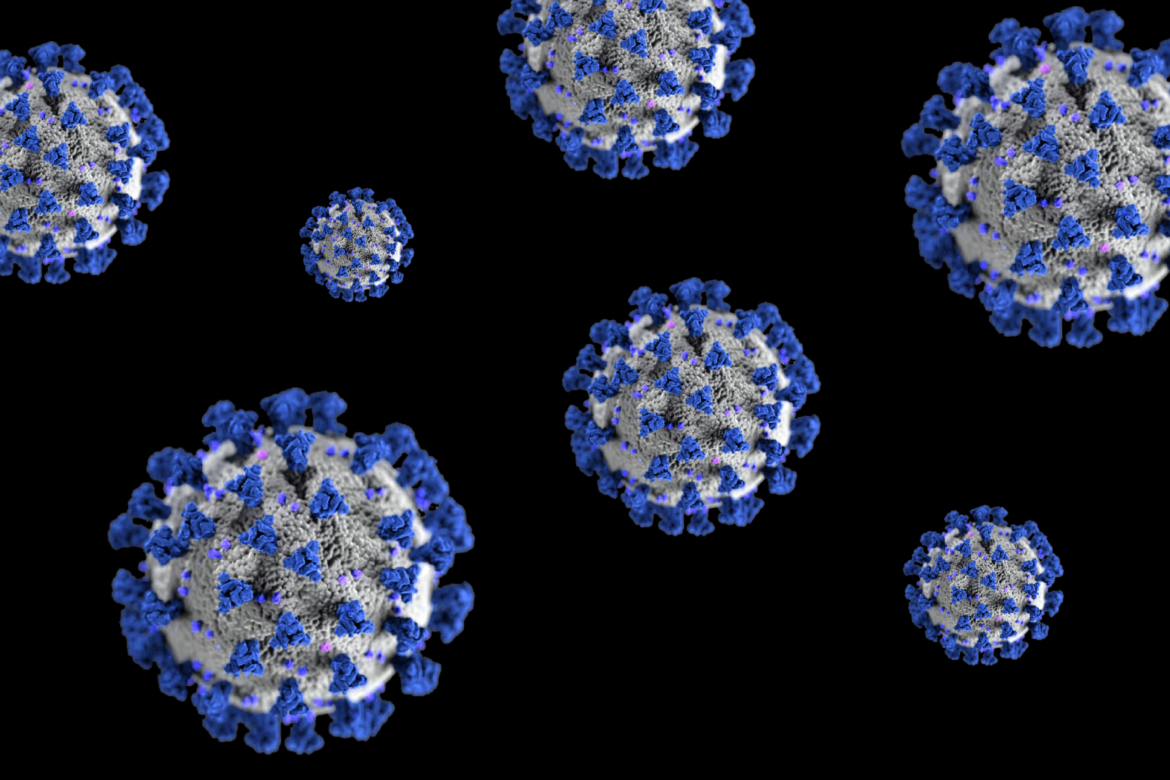 As a health and development economist, I study how households make decisions under uncertainty. Specifically, I look at how bureaucracy, social stratification and place affect those decisions. The coronavirus pandemic is that sort of uncertainty. And looking at the Pittsburgh region through the lens of my expertise, I worry that our region will be hit especially hard by COVID-19.

Here’s why: Our notorious degree of municipal fragmentation further worsens and complicates realities for populations that are vulnerable because of age, air quality and existing inequalities.

And against that backdrop, UPMC's growing medical monopoly practically caricatures the risks to the U.S. healthcare system as a whole. This monopolistic control is also more likely to drive local policies than vice versa: the tail wags the dog insofar as small boroughs and understaffed counties are tasked with regulating the very behemoth they rely on for technical expertise and local employment.

There are steps our leaders can take that would help – but which first require us to confront the magnitude of the challenge.

I've been impressed by how quickly Mayor Bill Peduto's office has acted to confront the gravity of the situation. But the Pittsburgh Metropolitan Statistical Area has upwards of 900 distinct local governments, most of which lack Pittsburgh's financial flexibility, human resource capacity for rapid response or even clearly delineated authority for action. Inequality is hardly unique to Allegheny County, of course. Our municipal fragmentation is indeed unusual, though, and greatly exacerbates these vulnerabilities. 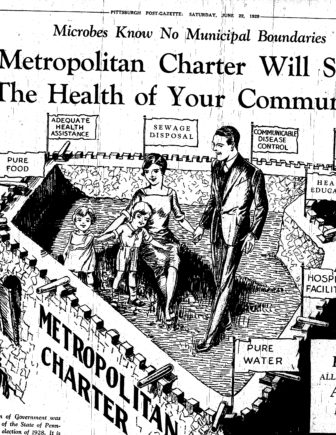 Pittsburgh Post-Gazette archive image related to the debate over the Allegheny County consolidation referendum of 1929.

Much of the attention has so far focused on the elderly and those with weakened immune systems or impaired lung function. Rightly so. Because our region is older, we can expect more per capita critical cases here than elsewhere in the United States. But there are other vulnerable populations in our community that face significant risks: hourly workers, people with disabilities and those within our jail and prison systems.

Let's consider Wilkinsburg, for example. Wilkinsburg is already grappling with the intersecting challenges of racial inequity, municipal finance, aging and the impending future of work. One in four of Wilkinsburg’s nearly 16,000 residents are estimated to live below the poverty line. Moreover, the borough has an aging population, with about 18% of residents older than 65, while about 13% of younger residents have disabilities (more than 50% higher than the national rate). The health disparities are also clear through the overall infant mortality rate, with Black infants dying at four times the rate of their white neighbors — a pattern I expect to see similarly reflected in coronavirus survival rates as that reflects broader unconscious bias on the part of medical providers.

In other words, Wilkinsburg is now facing a pandemic under the same barriers from systemic racism as poor neighborhoods in the City of Pittsburgh. On top of it, it shares budget hurdles with smaller, aging river towns in a state notorious for its fragmented local governance.

Now, Wilkinsburg schools — like those across the state — have already closed for at least two weeks under the governor's mandate. How will we ease the impact of social distancing in those boroughs and facilitate self-isolation? What happens if and when mandatory quarantines become necessary? Are local police departments sufficiently trained and trusted to take on the role of enforcement? If not, are we ready to face the implications of deploying the National Guard (as New York, Maryland, and Colorado already have)?

Beyond Allegheny County — which announced its first confirmed cases on Saturday — we should also worry about Washington County, which on Friday reported its first confirmed case. Washington County is an area where households already struggle with unusually high rates of cancer and compounding health conditions and will now possibly face the economic fallout from declining global demand for natural gas production. Health workers, another one of the largest occupations in these small towns, are among the highest at risk of transmission; meanwhile, the surrounding rural areas already struggle with limited hospital capacity. Elsewhere, social distancing measures will give large manufacturing plants an added incentive to shift further toward automation, adding urgency to big-picture questions about the future of work.

See the latest news on COVID-19's presence in Pennsylvania and measures being taken by area officials and institutions.

But highly decentralized authority is going to make it difficult at the county level, too, and highly variable. The chair of the Allegheny County Board of Health initially contradicted the governor's recommendations against large events. According to local officials, the state refuses to share details with some counties previously impacted by the virus, while those that do have information are each taking quite different approaches to acting on it.

Moreover, the inequitable distribution of federal resources across these counties and boroughs will not only have immediate impacts on their ability to mitigate the pandemic, but will also have persistent effects from any inevitable disruptions during the Census (whose timing is enshrined in the U.S. Constitution itself).

So what can we do? In the short term, we should focus on scaling up existing platforms for regional coordination across municipalities, like The Congress of Neighboring Communities [CONNECT]. We should also find ways to harness the generosity of local business leaders, perhaps leveraging the United Way’s track record of coordinating resources and services across the region.

It may mean reaching across the aisle to engage mayors and other municipal officials of different political persuasions to help combat misinformation, including some of the inconsistent messaging from the national Republican party or cable news pundits. Just yesterday, my husband overheard at the barber shop: “We need to take measures if the coronavirus turns out to be real.”

We need trusted local leaders to dispel the idea that it’s an “if” or even a “when.” It’s happening, and it’s happening now. Changing the conversation at barber shops has long been an explicit aim of many public health programs, and this situation should be no different. Across the board, we need mechanisms in place to ensure that people maintain hope for the future even as they prepare for a tough present. Otherwise, they may take less care of their health rather than more if their long-term prospects seem imperiled anyway.

"...COVID-19 will also serve to highlight long-standing cracks in our system or accelerate risks that were already on the horizon."

There are positive lessons from our past here, such as the Women’s Division of the Influenza Epidemic Committee, and volunteers with grassroots organizations should consider how they might similarly leverage their deep social networks to help ease the burden on communities. Major employers like Carnegie Mellon and Pitt – not to mention UPMC itself – should not only move beyond offering indefinite paid sick leave for salaried employees but also offer protections to hourly workers whose shifts are at risk from campus closures.

Meanwhile, foundations should go beyond the laudable flexibility they’ve already extended to existing grantees. When brainstorming ideas to motivate good behaviors, I think the foundations could perhaps offer prizes to motivate more widespread testing at both the county and facility level. Or designate an award fund for people who are confirmed to have coronavirus and are willing to demonstrate quarantine compliance with voluntary ankle monitors.

This is also a time for creative long-term solutions, and I hope that Pittsburgh's philanthropic sector takes the helm in promoting a broader regional vision. Because at the end of the day, this is not just about pandemic resilience. This is also about laying the groundwork for a regional approach to innovation and sustainable development.

No matter how effectively our local officials step up to the plate, even the best-case scenarios will be rife with loneliness, loss and hardship, and trauma has spillover consequences. When the Soviet Union collapsed, life expectancy fell off a cliff – partly because of the direct impact on medical systems, but largely because of the uptick in alcoholism. We need to recognize that the net effect of this pandemic will not be the number of those who have died (although there will be many, unfortunately). It will be the collective grief and trauma of those left behind.

Right now, everyone is afraid of the scenario depicted in the movie “Contagion,” but my greater worry is that we will live in HBO’s “The Leftovers,” where the world struggles to move on in the years after 2% of the population mysteriously disappeared, seemingly at random. If there was ever a moment to (re)read “The Plague,” this is it. There is a reason that author Albert Camus adopted disease as an allegory for the lived experience of wartime occupation, but it also works on a literal level just as well. Unfolding events will unquestionably incur a substantial mental health toll for years to come.

Indeed, we’ve previously experienced something similar here. Despite the narratives of Pittsburgh’s renaissance, the wider region is already suffering from “deaths of despair” due to overdoses, suicides and alcohol-related illness, which scholars have mapped to the collapse of major industries like manufacturing, coal, and, yes, steel.

Our universities and foundations have already committed substantial resources to address the opioid epidemic specifically; now, they should expand those programs in anticipation of the coming mental health crisis. Undoubtedly, their endowments have taken a hit, but this is a moment for outside-the-box financing — and if there were ever a time for a board of directors to authorize spending down endowments, this is it.

Bloomberg Philanthropies has already announced an initiative to build local government capacity for dealing with the pandemic. Why not take a similar approach to promoting regional experimentation, such as seed grants to explore how municipalities might take advantage of historically low Treasury rates to borrow funds for a universal basic income pilot or designing insurance policies to offset related risks? Meanwhile, our elected state and national legislators should be clamoring to authorize Medicaid expansions – or, better yet, to explain to their constituents how this pandemic underscores the urgent need for universal health coverage.

Pennsylvania was appearing in articles about coronavirus even before a confirmed case was reported here, and for a less-than-enviable reason: as an example of what not to do during an outbreak.

During the 1918 influenza, Philadelphia infamously went ahead with a parade, which contributed to about 10,000 additional deaths than St. Louis, where the city mandated social distancing. Similarly, Pittsburgh was among the last cities then to implement policies like school closures and paid a high price for the delay, with the highest death rate of any major U.S. city. The history books may focus on those city-level choices, but I’m willing to bet that the larger fault lies with state-level structures and the fragmented decisions that result. That doesn’t mean we’re doomed to repeat those mistakes, though.

The coming months will bring many new and unexpected challenges everywhere; here, COVID-19 will also serve to highlight long-standing cracks in our system or accelerate risks that were already on the horizon. Now is the time for action on every front, and we have no time left to lose. 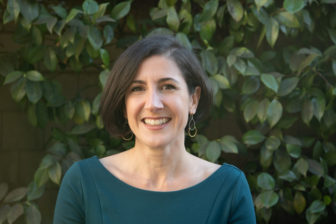 Jessica Pickett holds a Ph.D. in healthcare management and economics from the Wharton School of the University of Pennsylvania and is a co-founder and principal consultant of the strategic advisory firm Tomorrow Global, LLC. She can be reached at jpickett@tomorrowglobal.com or on Twitter @pickettjessica.