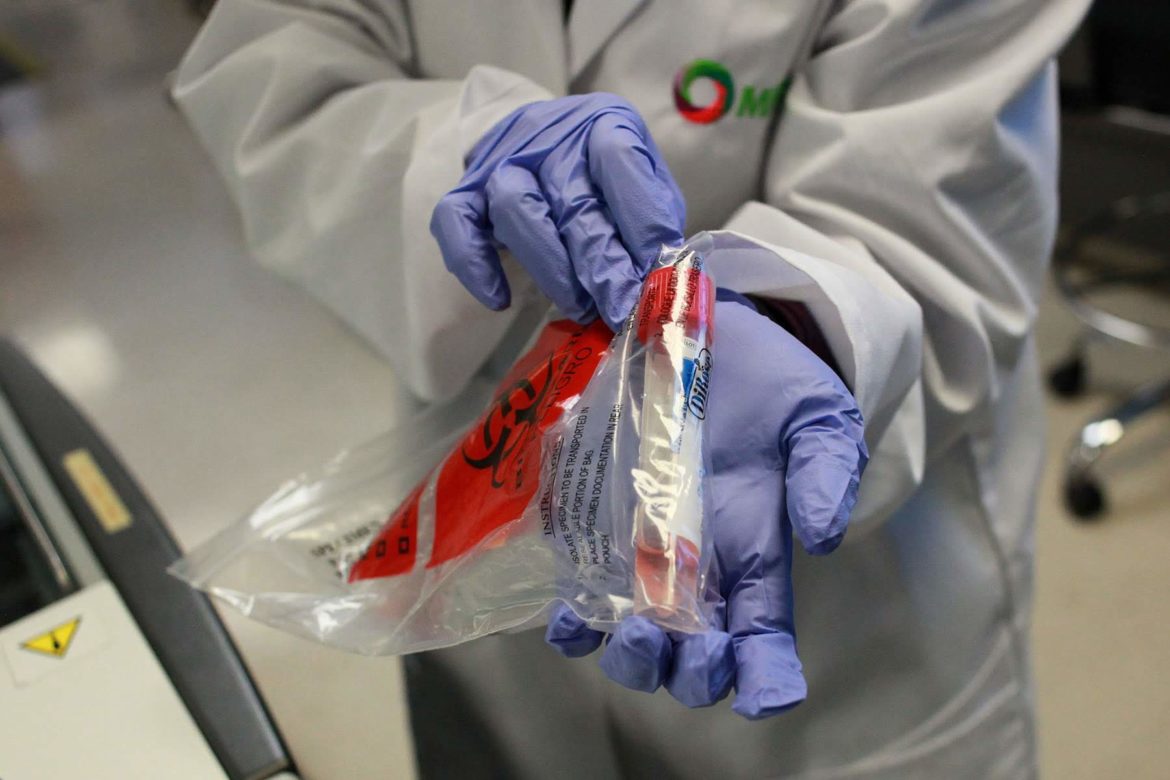 A patient sample that is awaiting testing for the coronavirus. (Photo by Kimberly Rowen/PublicSource)

Update (4/15/20): On April 15, Gov. Tom Wolf announced the creation of a COVID-19 task force to address how the pandemic is affecting minority communities in the state. The task force is being led by Lt. Gov. John Fetterman and includes the executive directors of each of the governor’s five commissions representing minority populations, as well as community stakeholders.

Update (4/11/20): On April 11, the Allegheny County Health Department began reporting race data on COVID-19 hospitalizations and deaths in the county. While more than half of the cases reported to the county do not include race information, the department has been able to determine the race of a majority of the people hospitalized and all of the deaths through case investigation interviews.

As of April 11, 22 of the 130 hospitalizations were of Black patients; 80 patients were white, five of other races and 23 unknown. Of the 19 deaths to date, one was a Black person.

Reports from other American cities, counties and states show that Black people are disproportionately contracting and dying from COVID-19. Yet a lack of local data makes it impossible to see how the virus is impacting Black residents in Allegheny County and across Pennsylvania.

Both the Allegheny County Health Department and the Pennsylvania Department of Health said they do not have complete data on the racial breakdown of COVID-19 cases and aren’t yet releasing the information they do have.

The county also does not break down its public data on COVID-19 cases by ZIP code or Pittsburgh neighborhood, making it difficult to determine whether cases are clustered in high-risk areas, such as places with higher rates of diabetes, hypertension and asthma. Those areas are often majority Black communities and have larger shares of low-income residents.

Tiffany L Gary-Webb, an associate professor at the University of Pittsburgh Graduate School of Public Health, stressed the importance of knowing the rates of testing, number of cases and numbers of deaths within Black communities, particularly after seeing such alarming statistics in other parts of the country.

“Now that we know this is happening, we need to be reporting everywhere, and then we need to be trying to intervene in every way we can,” she said in a virtual town hall hosted by 1Hood Media and UrbanKind Institute on Tuesday.

While several states, including Illinois, Louisiana, Michigan and  North Carolina, have begun providing racial breakdowns of their COVID-19 cases, the majority of states have not.

In Chicago, Black people are dying from COVID-19 at rates nearly six times that of white people.

In Louisiana, the population is one-third Black, yet Black patients account for 70% of the COVID-19 deaths.

Across the state of New York, Black and Hispanic people make up a disproportionate percentage of COVID-19 fatalities.

And Black people make up an overwhelming 81% of COVID-19 deaths in Milwaukee County, despite making up only 26% of the population.

In Pennsylvania, state Rep. Jake Wheatley, D-Hill District, is hoping to introduce a bill this week that would require the state to collect racial data for COVID-19 patients. He said the data would be used to allocate resources to the areas that are being hit the hardest. “We want to make sure we’re targeting those who are impacted the most,” he said. “This doesn't put an added burden on our healthcare system because they’re already collecting data like age and gender.”

Wheatley stressed that Black communities in the Pittsburgh region already have higher rates of preexisting health conditions and a lack of economic resources, both of which are likely to exacerbate the impact of COVID-19. “What I’m seeing is what we already knew before the pandemic hit: We were woefully unprepared from an equity standpoint,” he said.

On April 9, the Urban League of Greater Pittsburgh, the NAACP Pittsburgh Unit, 1Hood Media and the Black Political Empowerment Project sent a letter to Gov. Tom Wolf and elected officials in Pittsburgh and Allegheny County requesting that the city, county and state immediately begin to track the race of COVID-19 patients. The letter also requested that a racial equity rapid response team be created to address existing health disparities, both locally and statewide.

Monica Ruiz, executive director of the Latino resource center Casa San Jose, said she had not heard of any COVID-19 cases in Pittsburgh’s Latino community, but she attributes it to a lack of testing. Most of the roughly 2,000 families Casa San Jose serves are undocumented, she said. Because of their immigration status, they often fear seeking medical help out of fear of being detained. “Honestly, people probably do have [COVID-19], but haven’t been tested because they don’t have the ability to access the medical services,” Ruiz said. 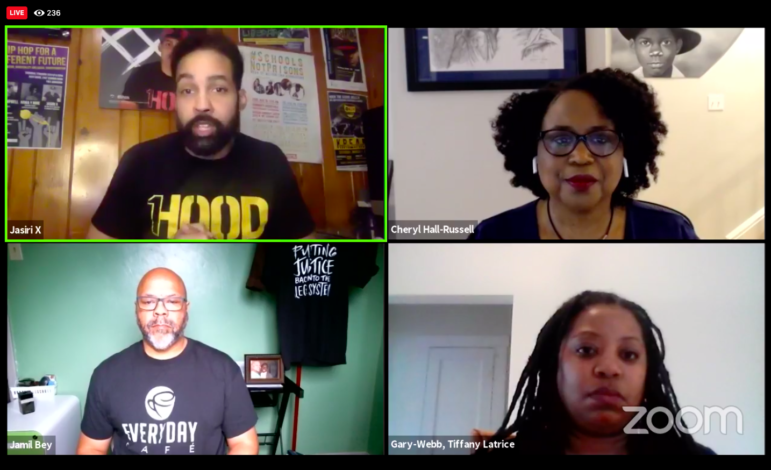 A screenshot of an April 7 virtual town hall organized by 1Hood Media and UrbanKind Institute.

President Donald Trump said Tuesday that federal authorities are working to provide national statistics on race and COVID-19 within the next few days.

Data reported to Allegheny County Health Department on testing is often incomplete, the county said in a Tuesday press release, adding that fewer than half of the reported tests contain data on race of the individual. According to the release, the department “is currently putting together a plan to look at racial demographics to address any inequities.”

PublicSource initially asked the county for a racial breakdown of cases on April 2, but was told additional COVID-19 statistics were being reserved for the public release of a data dashboard. It was not made clear whether race would be included in the dashboard.

The Pennsylvania Department of Health [DOH] was also unable to provide a racial breakdown of the state’s COVID-19 patients. Pennsylvania Health Secretary Dr. Rachel Levine said in a Tuesday press conference that the state is trying to address the lack of data on race.

“The healthcare systems don't tend to put in racial data, so that is a limitation for us," she said. "We are looking at different ways to collect that data, and when we have it, we will release it."

When PublicSource asked DOH for the racial breakdown of the COVID-19 deaths in the state — as death certificates include race — DOH Press Secretary Nate Wardle said the state was working on getting those numbers but was not able to provide the data immediately.

Gary-Webb said racial data would not only show the impact on communities but allow for proactive measures to be taken.  “Because too often, when we’re looking at data by race, and when we’re looking at disparities, it’s at the end of it,” she said. “And this is moving so quickly, that in a couple of weeks, that data is going to be old and we won’t be able to impact the numbers.”

The issue has gained national attention. U.S. Surgeon General Jerome Adams said Tuesday that Black people are at a higher risk for COVID-19 because they have higher rates of COVID-19 comorbidities and a higher likelihood of being low-income. Democratic lawmakers sent a letter on March 27 to U.S. Health and Human Services Secretary Alex Azar asking the department to address racial disparities in the country’s pandemic response. The Lawyers Committee for Civil Rights Under Law and the American Medical Association have called for similar action.

In Allegheny County, 1Hood CEO Jasiri X called the lack of racial data alarming. “I would like one of the things that come out of this is for us to talk directly to the Allegheny County Health Department to say, ‘We want this data collected,’” he said. “What resources are going to be available to our community to help fight back?”

Update (4/9/2020): This story was updated to include information on an April 9 letter from advocacy groups for Pittsburgh-area Black residents on the importance of tracking racial data.

Update (4/8/2020): This story was updated to include comment from Monica Ruiz, executive director of Casa San Jose.