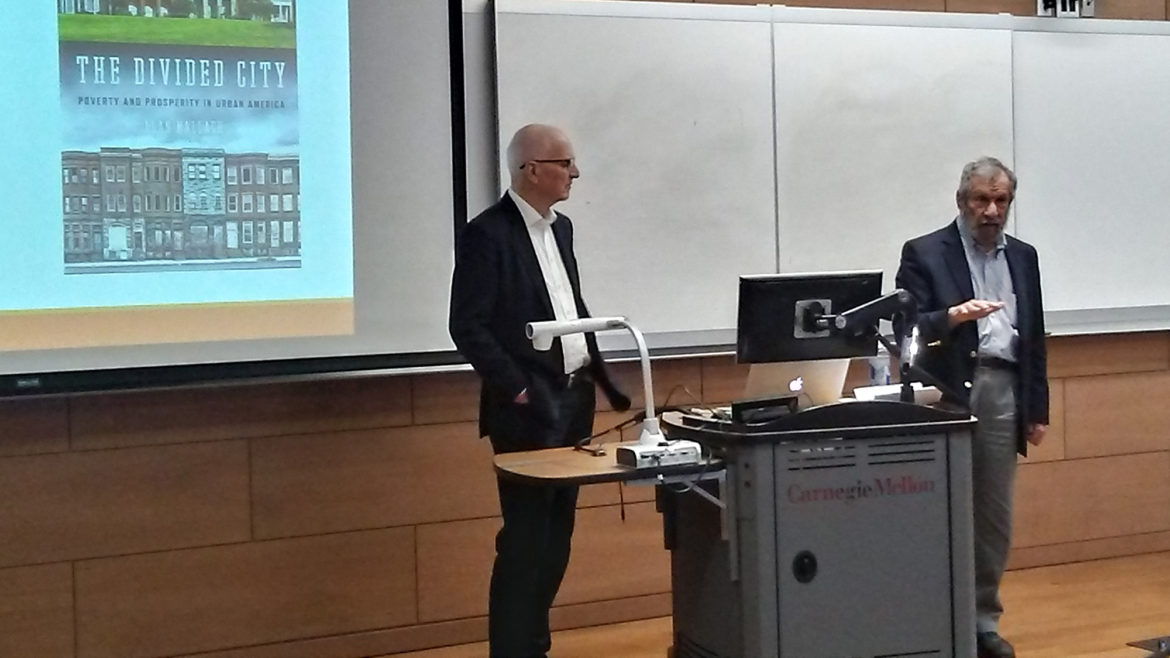 Community development guru Alan Mallach points to the rise of “eds and meds” and the influx of young, educated professionals into urban areas as major trends that have transformed Pittsburgh and other American cities over the last two decades, bringing investment and jobs to many declining neighborhoods.

“Taken as a whole, American cities, particularly older cities, are doing better than at any point really since the 1960s,” he said at a lecture Tuesday evening at Carnegie Mellon University. “This is an amazing revival, and it’s worth celebrating.”

He’s quick to note, though, that such progress is only half the story: “At the same time, for people who live in those cities, more of them are living in poverty, more of them are living in substandard housing and in neighborhoods that do not provide a decent quality of life. At the same time that our cities are drawing thousands of jobs and billions in new investment, more people live in these cities who lack jobs and opportunities.”

In Pittsburgh, young professionals are moving into such neighborhoods as Lawrenceville, East Liberty and the South Side, driving a surge in development, while long-time residents are leaving. Fewer people are living in predominantly white working-class and black neighborhoods, such as Homewood and the Hill District, and those who do are, on average, lower income and older.

In his new book, “The Divided City: Poverty and Prosperity in Urban America,” Mallach links these divergent trends. His research as a senior fellow at the Center for Community Progress in Washington, D.C., focuses on demographic shifts and the decline and redevelopment of neighborhoods in mid-sized Rust Belt and Midwestern cities. 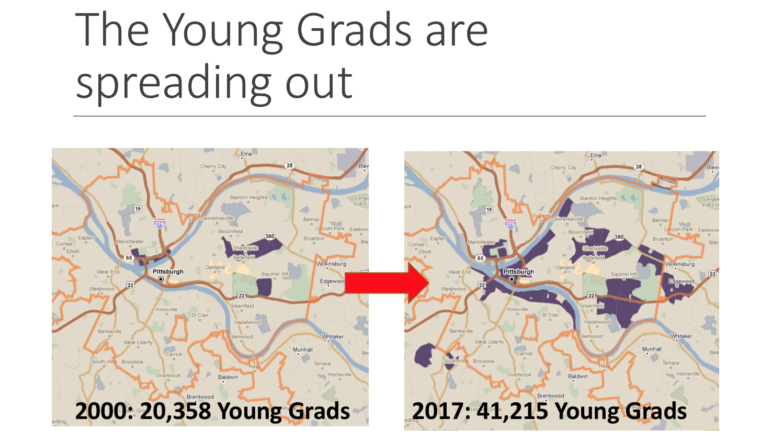 Mallach said that while gentrification is a tangible problem in some neighborhoods, he’s more concerned about overall decline and disparity. In Indianapolis, for example, he found six neighborhoods gentrifying, based upon data showing a significant rise in incomes and property values. He found these measures declining in 60 neighborhoods.

“In terms of the harm being done to working class, lower-income families,” he said, “what was going on in those 60 census tracts dwarfs what’s going on in the handful of [gentrifying neighborhoods].”

According to Mallach, the middle class, across all races, is leaving central neighborhoods in Pittsburgh, Cleveland, St. Louis and other small and mid-sized cities. Reinvestment brings upper-scale housing stock to some neighborhoods, while others, still struggling to recover from the housing foreclosure crisis 10 years ago, are overwhelmed by abandoned houses and overgrown lots. Meanwhile, incomes in white and black household are diverging. In Pittsburgh, white household incomes have risen 70 percent since 2000, while black household incomes have risen only 10 percent, an actual decrease in income when adjusted for inflation.

Mallach’s lecture was co-sponsored by the CMU’s University Lecture Series and The Remaking Cities Institute, the School of Architecture’s urban design research center. More than 80 researchers, students and community members attended the event. Earlier in the day, Mallach also spoke about his book at the University of Pittsburgh’s Center for Social and Urban Research.

Like Mallach, he’s pragmatic about neighborhood investment. “Cities change,” Carter said. “You really can’t direct where that change is going to go ...As long as we’re a free economy, developers or individual people are going to go where they feel their investment in a house or an apartment is going to be safest for them.” Mallach’s research, he said, shows that “neighborhoods are always in evolution. They’re either going up or they’re going down.”

Still, both researchers acknowledge the negative effects of gentrification, which is ultimately, according to Mallach, “about the power imbalance in cities and the extent to which people ... feel that they are powerless to influence outcomes ... the extent to which cities are seen as trampling over traditional cultures, value, practices and beliefs in the service of an ascending white hipster culture.”

According to Mallach, solutions lie in workforce development, quality education and housing development and rehabilitation policies that encourage “spatial equity” as ingredients necessary for reversing inequality trends. Specifically, he would like the federal government to establish a national housing allowance program that prevents mass evictions and provides stable housing for all low-income families.

Pointing to such major investments as sports stadiums, built with hundreds of millions of public dollars, Mallach said he believes money is available for such a program. What’s missing, he said, is political will.

"...cities are seen as trampling over traditional cultures, value, practices and beliefs in the service of an ascending white hipster culture."

“Alan Mallach truly understands the deep challenges facing post-industrial cities, towns, and neighborhoods across the country,” said Presley Gillespie, president of Neighborhood Allies, in an emailed statement. “As a distinguished scholar, planner, strategist and practitioner, we consider him the Jedi Master of Community Development.” Gillespie added that he appreciates Mallach’s command of data and markets, and an ability to balance aspirations with pragmatic solutions.

Mallach’s report for Neighborhood Allies acknowledged the connection between development and revitalization strategies and the need to provide city residents with quality housing stock. Mallach recommended improving the overall quality of life in distressed neighborhoods by reclaiming vacant lots; by securing and, in some cases, demolishing vacant houses; regulating absentee-owned rental properties; targeting particular neighborhoods or even portions of neighborhoods where limited resources can have significant impacts; and ensuring that residents have equal opportunity to benefit from growth in job opportunities.

“I believe it is important to stress,” Mallach wrote in his report on Pittsburgh, “that any strategies must address not only the future of these areas as places, but increasing opportunities for the people who live there as well.”

2 thoughts on “What’s even more alarming than gentrification? One researcher urges cities like Pittsburgh to take a broader view.”