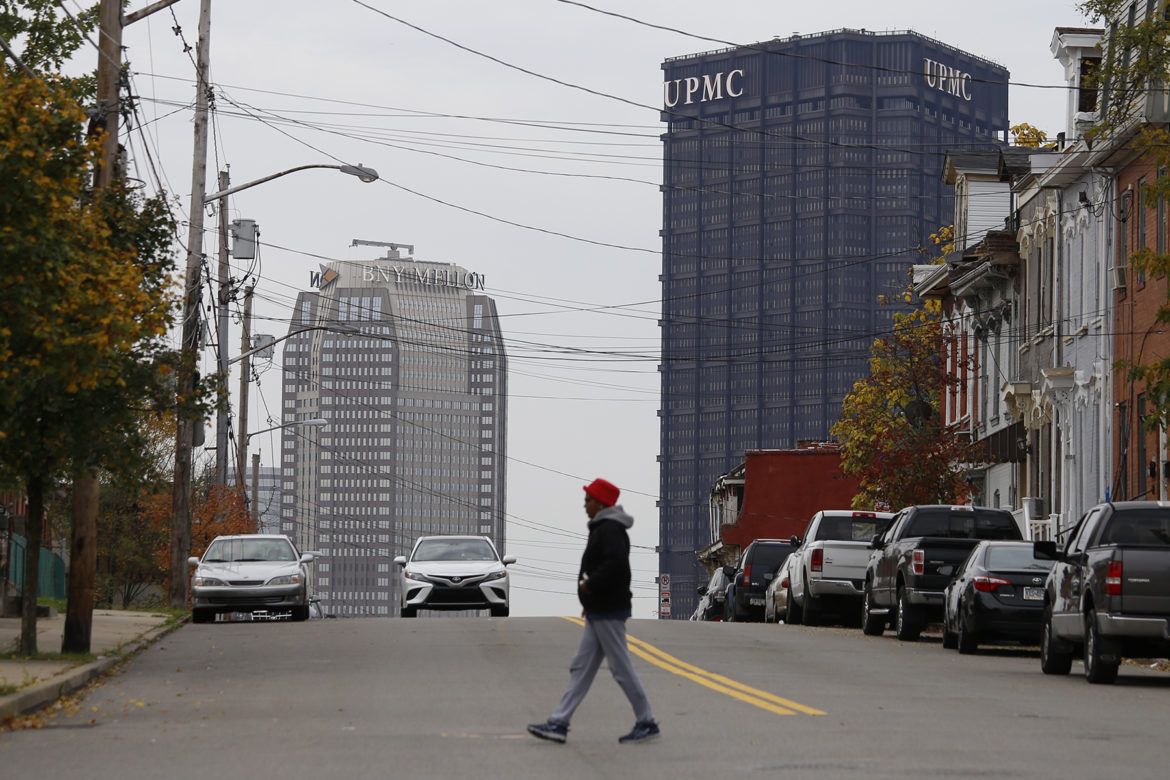 UPMC's logo atop the U.S. Steel Tower, Downtown, as seen from Webster Avenue in the Hill District. (Photo by Ryan Loew/PublicSource)

Update (7/14/20): UPMC will lead the charge to test all southwestern Pennsylvania care home residents and employees for COVID-19, and to strengthen the facilities' ability to fight the virus, the state Department of Human Services announced. The department announced that UPMC will also join the Lake Erie College of Osteopathic Medicine in working with facilities in the state's northwest. Efforts in other regions of the state will be led by Thomas Jefferson University with the University of Pennsylvania (southeast), Geisinger Clinic and Lehigh Valley Hospital (northeast), Pennsylvania State University (southcentral) and Geisinger Clinic (northcentral).

UPMC has applied to lead a $52.5 million state-funded effort to harden nursing homes and similar facilities — from Pittsburgh to Erie — against COVID-19. A decision from the state Department of Human Services on the contract is expected this week.

The spending is guided by legislation, passed in May, that UPMC helped to craft. The region’s healthcare giant, though, intends to share the contract with its rival, Allegheny Health Network, and two smaller nonprofits in an arrangement that some hope will deepen a spirit of cooperation amid the pandemic, which has taken a heavy toll on care homes.

"From the first time we approached and suggested to people from the systems that they should work together on this, there was absolutely no pushback," said Nancy Zionts, chief operating officer of the Jewish Healthcare Foundation*, one of the involved nonprofits. "The community expects us, all of us, to put our best foot forward and bring all of our resources to bear in this time of crisis. ... As much as we can bring those [health systems] together, I think it will only help the community."

UPMC, AHN, the foundation and the Hospital Council of Western Pennsylvania have applied to serve as the Regional Response Health Collaboratives [RRHC] for the southwestern and northwestern regions of the state. They would get as much as $38.9 million to protect and test some 28,500 residents of nursing homes, personal care homes and assisted living facilities in Allegheny and 10 other southwestern counties; and $13.6 million to do the same for 10,000 facility residents in Erie and 12 other northwestern counties.

Similar collaboratives are expected to be named in the state’s southeast, northeast, south central and north central regions.

Statewide, the department plans to pay them as much as $175 million to:

The legislation creating the RRHCs also allocates a separate $175 million to pay for testing unreimbursed by third-party payors, and allows the collaboratives to tap other unspecified funding sources to cover testing.

UPMC’s cooperation with AHN, the foundation and the hospital council brings “the key resources needed to promote the health and well-being of our seniors as well as other vulnerable populations living in the northwest and southwest regions of our state,” a UPMC spokesperson wrote in an email response to questions from PublicSource. “By collaborating, we will make the most efficient use of available resources.”

AHN declined to comment substantively ahead of the state's announcement, but a spokesperson emphasized that the region's No. 2 health system "has strongly advocated that collaboration among health care providers is essential" and applauds the state's effort.

Some advocates for both the nursing home industry and for its workers were cautiously optimistic about the RRHC program ahead of the state’s announcement, even though they were largely shut out of the process of designing the program.

"This isn't the way government is designed to work, all this rapid-fire guidance and how quickly everything is changing," said Kathy Cubit, advocacy manager of the Philadelphia-based Center for Advocacy for the Rights and Interests of the Elderly [CARIE]. "To me, 'collaborative' means something totally different, but these are unusual times."

Some 125,000 Pennsylvanians live in roughly 1,900 facilities including skilled nursing facilities, personal care homes and assisted living residences. They’ve accounted for around a quarter of the state’s COVID-19 cases and well more than half the deaths.

As those deaths climbed, House bill 2510, introduced May 12, zipped through the General Assembly in 16 days without a single no vote. On the day of final passage, then-House Speaker Mike Turzai issued a press release crediting UPMC with helping “to develop this plan to protect those most vulnerable to COVID-19. In fact, UPMC experts prepared, at the Speaker’s request, a prototype for southwest Pennsylvania and developed a construct for the entire state, much of which is embodied in his legislation.”

Gov. Tom Wolf signed the bill May 29. The department issued its solicitation June 10, and the state expected to award the collaborative contracts July 1, but has delayed that.

Though the legislation did not specify the types of entities that could apply to lead collaboratives, the state’s request for proposals limited applicants to health systems or academic medical centers. For the southwestern corner of the state, that effectively limited the field to UPMC and AHN. Their decision to partner ultimately gave the state few, if any, options to choose from.

The extent of UPMC’s involvement in the design of the program isn’t entirely clear.

In a June 4 press conference, Dr. David Nace, chief medical officer of UPMC Senior Communities, said UPMC had worked with Turzai and the Legislature on the bill, and "leads the program for southwestern Pennsylvania."

"In collaboration with Speaker Turzai and the General Assembly, we were able to pull this legislation together quickly and effectively," he said. "When there is a public health crisis, Pennsylvania policymakers have realized that they can always turn to UPMC experts for guidance." 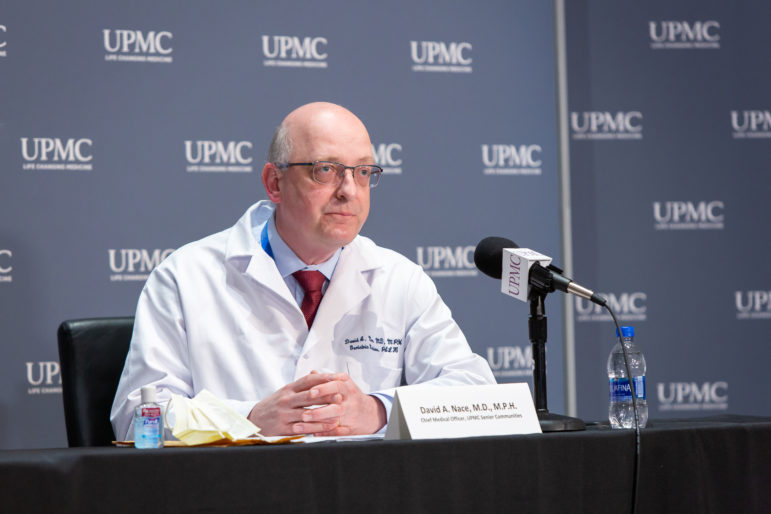 A spokesperson for Peoples Natural Gas, which now employs Turzai as its general counsel, said he is not doing interviews.

UPMC doctors “talked with the speaker about the concept,” said Steve Miskin, press secretary for the House Republican leadership. Then the speaker’s office called other medical centers throughout the state. "Everybody liked the idea of getting involved, because they have the expertise. They have the know-how. And they have the relationships locally."

PublicSource requested on June 12 under the Right-to-Know Law records reflecting any communication between UPMC and AHN on one side, and Turzai’s staff and Wolf’s top aides on the other end. The House denied the request for Turzai’s communications, saying any such documents would not be considered public records. The governor’s office exercised its right to take an additional month to respond.

Cubit said she did not know of any advocates for the elderly that were involved in the crafting of the program. “You have to move with a sense of urgency in these times,” she said, adding that she regretted that “the consumer advocates are pretty much left out of the equation with state government on that particular bill."

The Jewish Healthcare Foundation was also not consulted, but it likes the plan, said Zionts.

Another organization, LeadingAgePA, which represents more than 360 nonprofit senior housing providers, reported that it did have conversations with Turzai and UPMC about the bill, and was optimistic about the emerging effort in the western part of the state.

The labor union representing a chunk of the state’s nursing home workers was also left out, according to Matt Yarnell, president of the Service Employees International Union Healthcare Pennsylvania.

“We are pushing hard to make sure that workers have a seat at the table,” he said, adding that he was “really concerned” about the absence of workers from the equation.

A testing deadline, and no end in sight

An inspiration for the collaboratives is the three-month-old Educational Support and Clinical Coaching Program, under which the Jewish Healthcare Foundation and seven health systems statewide, including UPMC and AHN, collaborated on from April through June to provide online education and coaching about COVID-19 measures to long-term care facilities.

The collaboratives, though, face some difficult deadlines.

Skilled nursing facilities are required, under a state order, to test all residents and staff at least once by July 24. Personal care and assisted living facilities have until the end of August. “You'd want it done yesterday, but then it feels incredibly aggressive to get that done,” Zionts said.

The end of the schedule also raises questions, she said. Because the funding comes from the federal Coronavirus Aid, Relief, and Economic Security [CARES] Act, the state must spend the money by the end of the year. No one in health care, she said, expects “the world to go back to the way it used to be” by December.

Along with RRHCs, Yarnell said the state should look at an entire industry that “was in pretty dire straits before the pandemic. ...

“It can’t be one and done,” he said, and the decision-making process should be inclusive. “We really need to create the kind of table, frankly, that allows us to have a real conversation about investment in staff — investment and training.”

Correction: A previous version of this story misidentified Kathy Cubit's role at CARIE.