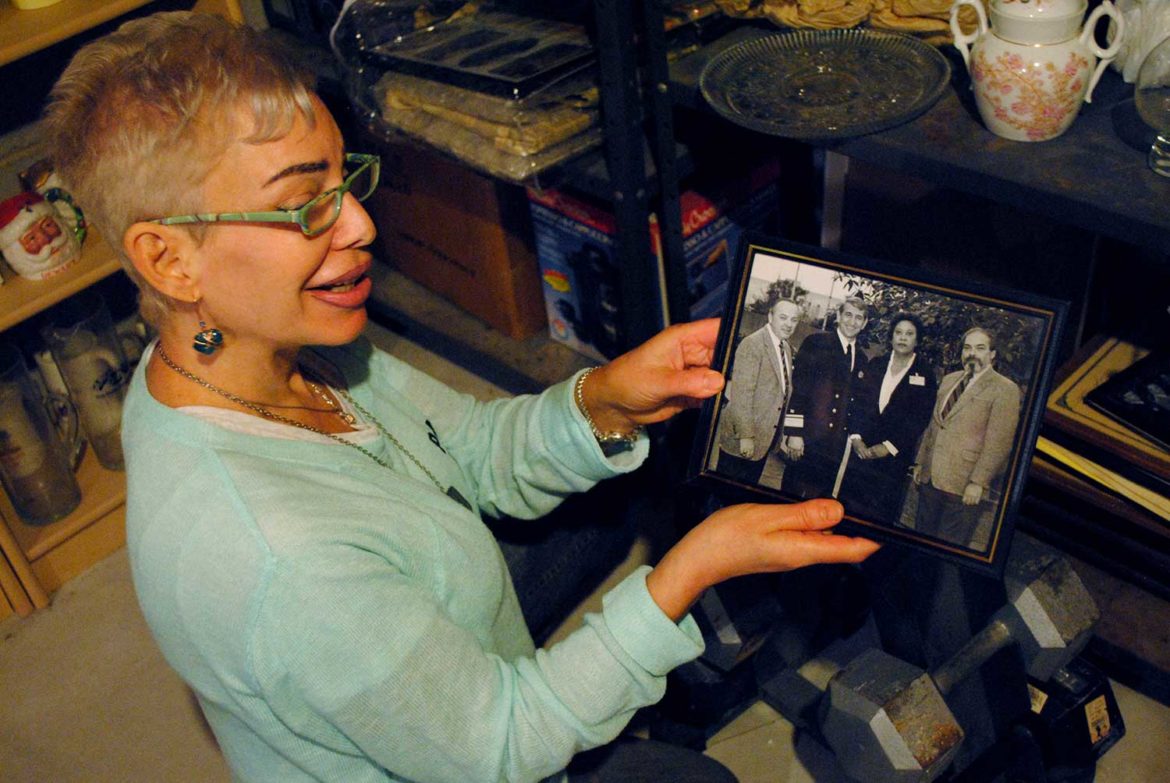 UPDATE: On Feb. 20, the Federal Bureau of Prisons responded to an open records request about compassionate releases, which was filed during this story’s  reporting. In 2014, the bureau’s central office approved 101 releases (including Benjamin Share’s) and denied 121. Eleven inmates died while awaiting a decision. In 2013, it approved 61 release requests and denied 15. Twelve inmates died while waiting for a decision. The statistics do not include requests denied by local wardens.

HARRISBURG – Linda Share fought for years to get her father home before he died.

Benjamin Share had been away for eight years. His kidneys were failing. He had congestive heart failure. His foot, an unnatural burgundy color, was swollen, and he had weeping sores that wouldn’t heal.

“The sores got worse and worse,” Linda said, describing her father’s deterioration in a nursing facility chosen by the prison. “I would drive to Manor Care and take home urine-stained and blood-stained clothing, his undergarments, and wash them for my daddy.”

After a March 2014 heart attack, leadership from the Bureau of Prisons in Washington, D.C., denied her father a compassionate release, explaining that his health had not deteriorated enough to qualify.

Within weeks, Benjamin Share’s condition had worsened to the point the 85-year-old inmate was transferred from the minimum security federal prison camp at FCI Schuylkill in Minersville, Pa., back to an off-site hospital and then to the Manor Care nursing facility.

He was every bit still a prisoner, serving 10 years for his role in a bribery scheme that won his software company $18.1 million in federal defense contracts.

When the Justice Department in June finally agreed he could go home to Harrisburg, prison officials said they expected him to live another six months.

He died in a matter of days.

But he was back in his own bedroom, listening to the opera he loved, waving his hands.

In just three more weeks, he would have been eligible for home confinement under the terms of his sentence.

Share’s death came roughly a year after the Justice Department’s Office of the Inspector General published a scathing report on the federal Bureau of Prison’s systemic failures to send dying and terminally ill inmates home if they qualified for compassionate release.

In August 2013, the Bureau of Prisons responded with revised policies that on their face would make it easier for men like Benjamin Share to leave prison.

But officials told Share he didn’t qualify, second-guessing the assessment of prison staff, and fighting his daughter who repeatedly warned them his health was failing.

Share’s case is remarkable because he’s one of the few inmates who actually did go home. He had Linda working full-time on the case, along with three lawyers, and significant support from U.S. Sen. Pat Toomey (R-Pa.).

But in terms of the barriers faced by inmates and the intransigence of the federal prison system, the case is entirely unremarkable. Critics say it’s business as usual.

Thirty years ago, Congress gave federal judges the authority to reduce an inmate’s sentence in “extraordinary and compelling” situations, which it did not define. But the Bureau of Prisons must first file a motion asking the judge to do so.

“The BOP has sort of put itself in the position of the judge and the jailer,” said Mary Price, general counsel at the Washington-based legal reform organization Families Against Mandatory Minimums.

Price is familiar with Share’s case but didn’t advocate for him directly.

The Justice Department’s inspector general had similar criticism, saying the program was badly managed, resulting in haphazard decisions based on inconsistent criteria.

From 2006 through 2011, the bureau granted releases to roughly 24 inmates each year on average, according to the April 2013 inspector general’s report. Over that period, 18 percent of requests were denied by the bureau‘s central office and about 13 percent of the inmates died waiting for a decision.

These statistics do not include requests denied by wardens.

The bureau does not release current statistics on compassionate release. Previously, the bureau said that it granted 39 releases in 2012 and at least 52 in 2013.

PublicSource filed a Freedom of Information Act request for the data, which has not yet been filled.

The Bureau of Prisons declined to make officials available to answer questions for this story.

The bureau’s August 2013 policy update addresses many of the inspector general’s criticisms. However, Jamie Fellner, a senior advisor to Human Rights Watch in the United States, points out that the policy doesn’t actually give the bureau any powers it didn’t already have.

But there was a piece in there that gave Linda hope.

According to the bureau, inmates 65 and older can qualify for compassionate release if they suffer from serious age-related medical conditions, have served more than half their sentence and are deteriorating mentally or physically without substantial improvement.

Share had served well over half of his 10-year sentence. Doctors thought his health was dismal.

But in a March 2014 letter, Kathleen Kenney, the Bureau of Prisons general counsel, informed Share’s warden that the release was denied.

Holder recently said that initiative was one of his proudest accomplishments. In an interview with the Marshall Project, a nonprofit news organization, he questioned whether long sentences for nonviolent crimes served “any good purpose” and said he asked Justice Department officials to rethink them.

Meanwhile, federal prisons are still hopelessly overcrowded, with a population of more than 210,000 inmates. Nearly 10 percent of that population is 56 or older.

Bribery and a life sentence

In 2006, he pleaded guilty to conspiracy to defraud the United States and obstruction of justice. In plain language, he was involved in an illegal scheme to win a federal contract for his Harrisburg-based software company.

Share previously was sentenced in 1985 to three years probation for accepting illegal gifts while legal counsel at the naval base in Mechanicsburg.

U.S. District Judge Sylvia Rambo sentenced him to five years in federal prison for each count – 10 years total for his latest offense. He would have turned 87 in prison if he served the full term.

“She sentenced him to death,” Linda said in the living room of her father’s Harrisburg home. She moved there from New Jersey in 2011 to care for him when he left prison.

However, in August 2011, Rambo had a change of heart, writing that she would support a sentence of home confinement, which Share sought in his commutation request from President Obama.

The commutation was denied by the White House.

A representative said Rambo does not comment on cases.

But Benjamin Share did get out and was able to die at home under his daughter’s care with his beloved opera playing. Isn’t that evidence that the system works?

For one, the bureaucracy thwarted her every effort until her father’s last days, when death was unmistakably imminent.

Second, she blames his death on poor medical care in prison. A federal appeals brief cites a 2007 incident when Share was hospitalized with acute sepsis and kidney failure after collapsing in his cell, allegedly due to the staff’s failure to monitor his reaction to a medication administered after he tested positive to tuberculosis.

This directly led to his decline, Linda said.

And third, she had two things many people trying to get loved ones out of prison lack: Time and money.

She estimates legal costs were six figures. She left work and made getting her dad out of prison a full-time job, amassing 70-pounds worth of paperwork related to the case.

Attorney James B. Craven III — one of three lawyers employed to get Share home  — has worked numerous compassionate release cases in his career. He describes a litany of delays and inattention.

Getting a release without help from Congress can be impossible, Craven said.

But Share had an ally in Sen. Toomey, whose office went so far as to request copies of the inmate’s medical records. And with her dad just days from death, Linda received updates on her father’s case not from the Bureau of Prisons, but from the senator’s staff in Harrisburg.

“One of the very few things the BOP does respond to is expressions of congressional interest,” Craven said. “They answer my mail when they damn well feel like it.”

Otherwise, the pace is glacial, Craven said. He doubts things have changed more than superficially since the inspector general’s report.

The bureau did not answer written questions about its policy. A representative referred PublicSource to the policy itself.

In a legal brief, prison warden Jeffrey Krueger said that Share did not back his assertion that he would die in prison with documentation from doctors. Officials repeatedly argued that Share received proper care.

A representative from the prison said he could not answer questions about Share.

Now Linda lives alone, sorting through a lifetime of her dad’s possessions, sometimes clearing whole basement shelves into the trash.

She’s not sure if she’ll stay. But, for now, she sleeps in his bedroom, stashing tissues under her pillow at night.

The ordeal has taken a toll. For two months after his death, Linda took to bed in deep depression.

But she’s also made a tenuous peace.

Prison gave her a relationship with her father she would never have had if he’d been free. Weekend after weekend, she’d visit Minersville, and there was nothing to do but talk. So they’d gab for hours.

At the end, his wish was to die in his house and receive an orthodox Jewish burial.

He didn’t have a life after prison, but after years of fighting, the bureau did send him home.

“I’m just glad I was able to give him in death what he wanted,” Linda said. “It’s a horrible thing not to be able to do that.”