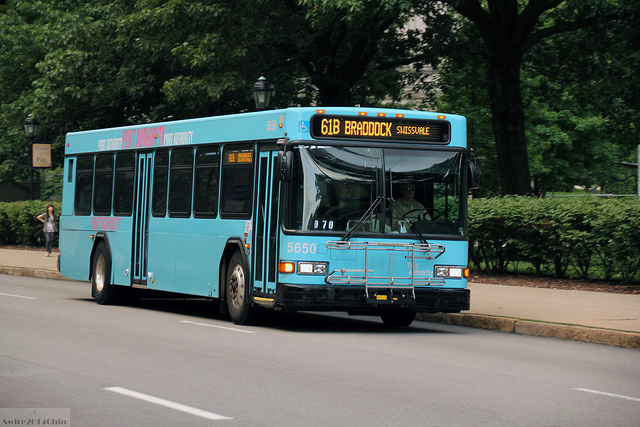 Buried in last week’s report about the deepening debt of the Pennsylvania Turnpike Commission was an early warning for the thousands of people in the Pittsburgh area who rely on public transit for rides to work or the grocery store.

The Port Authority of Allegheny County could be in jeopardy of losing more than half of its annual funding in just six years, according to state Auditor General Eugene DePasquale.

By fiscal year 2022-2023, the Turnpike Commission will be allowed to drastically cut its payment to the Pennsylvania Department of Transportation [PennDOT]. Right now, the commission pays $450 million a year to PennDOT to pay for public transit. In six years, it will only be responsible for $50 million annually.

Since the 2007-2008 fiscal year, the Port Authority of Allegheny County has received between 50 and 60 percent of its funding each year through PennDOT. Two laws, Act 44 and Act 89, set up this payment structure.

How this came to be is the result of many years of Pennsylvania lawmakers searching for ways to fund roads, bridges and transportation in the state. It stretches back to 1970 when Interstate 80 construction was completed.

At this point, lawmakers, PennDOT and the Port Authority recognize the impending crisis for public transit users in the Pittsburgh region, but no one has any formal plans for avoiding or fixing it yet.

“It’s going to have a serious impact. We just don’t know what that’s going to be yet,” Port Authority spokesman Adam Brandolph said.

DePasquale told PublicSource this could have a “devastating” effect on public transportation. “The right time to fix this was the last transit bill and it didn’t happen,” he added.

In a statement, PennDOT Communications Director Rich Kirkpatrick said both Act 44 and 89 provided PennDOT with “significant resources,” but the department could not speculate about how it would replace the funding in by fiscal year 2022-2023.

Rep. Dan Frankel, D-Allegheny, has long fought for public transportation funding and voted in favor of both acts, said potential solutions include increasing the tax on gasoline or lobbying the federal government again to allow Pennsylvania to toll I-80.

Act 44, signed into law in 2007, was originally the result of state lawmakers’ plan to give the Turnpike Commission control of I-80 and let it add toll booths to the interstate. The act said the commission would lease the road from PennDOT and that PennDoT would use the rent money to fix roads and to pay for public transportation.

But the federal government in 2010 said Pennsylvania was not allowed to toll I-80. Even so, Act 44 remained on the books. The state, though, lowered the commission’s payments in 2011 from $900 million to $450 million.

At the time, Frankel said, “no one was going to mess with” Act 44, in part because it gave the state a way to pay for public transportation.

“The chickens coming home were down the road, so we just kicked the can down the road,” Frankel said. “We now obviously have to worry about it. We probably needed to be closer to some consequences.”

Act 44 caused the Turnpike Commission to go into deeper debt than it could manage. So, in 2013, lawmakers passed Act 89, which fixed Act 44 by lowering the commission’s annual payments to PennDOT and making PennDOT spend all of the money on public transportation.

The Turnpike Commission has paid a total of $5.2 billion to PennDOT since the laws were enacted, with $3.45 billion going to public transportation.

For its part, the Turnpike Commission is sympathetic toward the state’s public transportation but is looking forward when it won’t have to send hundreds of millions to PennDOT each year.

“[Act 89] provides the Turnpike great relief from this funding obligation,” said Carl DeFebo, a Turnpike spokesman. But, “we’re a transportation agency and we understand that needs to be funded.”

The Port Authority of Allegheny County cut service by 15 percent in 2007 and again in 2011. It was Act 44 money that helped the organization stay afloat, and then Act 89 funds provided even more stability, Brandolph said.

“We were having financial struggles. Once Act 89 went into effect, it alleviated a lot of that,” Brandolph said.

According to its annual budgets, the Port Authority now receives upward of $200 million each year under Act 89. Recently, it has begun adding back routes and increasing the number of buses on the roads.

Before the six years is up, Frankel said he’s optimistic that legislators can find a new revenue source — rather than cutting other state programs — to keep both PennDOT and the state’s public transportation systems funded.

“It's not a choice,” he said. “We have to to fund public transit. It affects people in the state."