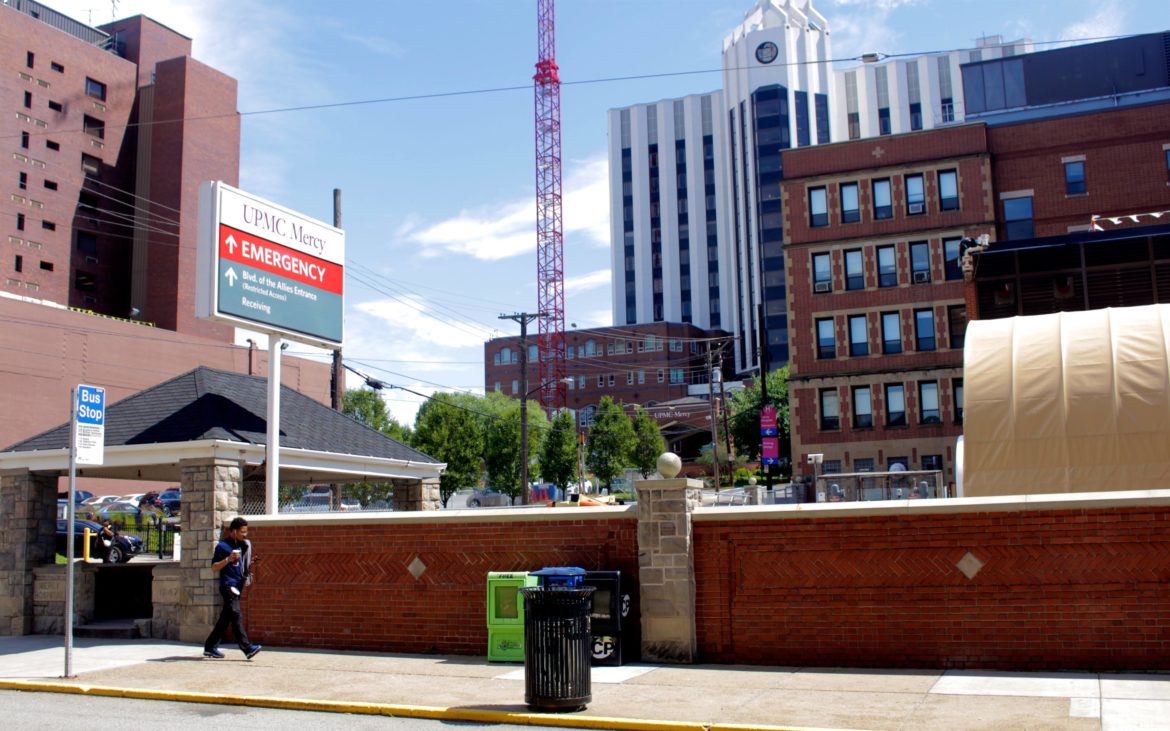 Global indicators of climate change consistently set records. Eighteen of the 19 warmest years on record have occurred since 2001. Greenland and Antarctica lose hundreds of billions of tons of ice mass every year due to melting. The sea level rose about 8 inches in the past century, and the rate is accelerating.

Ninety-seven percent of climate scientists agree it’s extremely likely that global warming over the past 50 years has been a direct result of human activity, specifically the production of greenhouse gases.

Pennsylvania is a major culprit. In 2016, the state had the fourth worst carbon dioxide emissions in the nation, behind only Texas, California and Florida. Pennsylvania emitted 219 million metric tons of carbon dioxide that year. That’s comparable to emissions rates of countries like Egypt and Vietnam, each of which has a population roughly seven and a half times that of Pennsylvania.

The potential impacts of climate change looming ahead are threatening. Rising temperatures are likely to cause increased flooding and droughts, disrupt farming across the state and harm Pennsylvania’s ecosystems, according to the United States Environmental Protection Agency [EPA].

One thing is clear: to combat climate change, changes need to be made — and fast.

As part of the Covering Climate Now global reporting initiative, we spoke to three representatives from major Pittsburgh institutions on how they try to make their large footprint in the region more sustainable.

"Sustainability in higher education is a whole industry in itself, almost," said Aurora Sharrard, director of sustainability for the University of Pittsburgh.

Sharrard leads the implementation of the 2018 Pitt Sustainability Plan, which includes 61 specific goals across 15 areas such as transportation and mobility, global outreach and food systems. The goals range from infrastructural, such as reducing greenhouse gas [GHG] emissions by 50% by 2030 from the 2008 baseline, to student-oriented, like “[t]rack sustainability-related service and study abroad opportunities for students.”

Sometimes the best steps to mitigate climate change aren’t the ones most people expect. For example, Sharrard said many people ask her about waste reduction, but the university’s waste accounts for only 0.7% of its GHG emissions. "So while recycling, composting [and] waste diversion is incredibly important, when you look at it from a climate spectrum, depending on your boundary, it is not the climate mitigation strategy," Sharrard said. 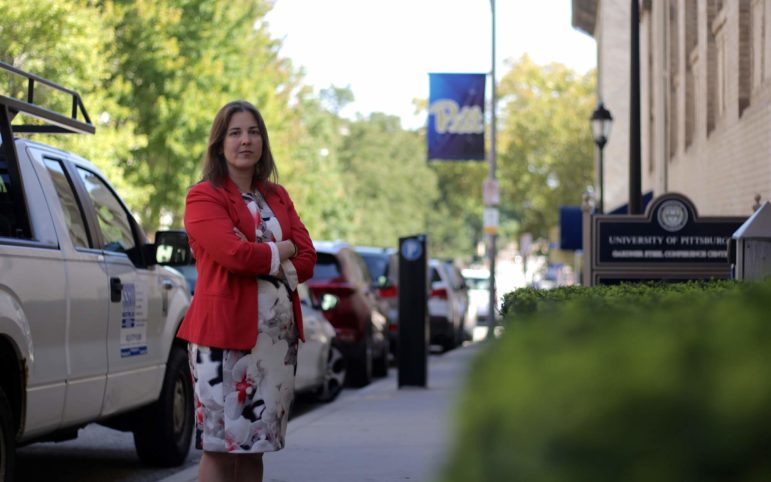 Aurora Sharrard, director of sustainability for the University of Pittsburgh, outside of her office. (Photo by Jay Manning/PublicSource)

One goal in Pitt’s Sustainability Plan is increased transparency. To achieve it, the University of Pittsburgh said it is implementing an online sustainability dashboard where its sustainability data, like food composting and building-specific energy use, will be visualized. The dashboard is scheduled to go live in the fall. Sharrard said it will make sustainability information more easily accessible and it will be updated as soon as the information is available as opposed to having to wait for the release of official reports.

In the past, the University of Pittsburgh has measured and reported on its GHG emissions every three years. Beginning with the 2019 fiscal year, it will be analyzing its emissions more frequently. “We just need that more up-to-date look on how our actions are actively hitting our greenhouse gas bottom line,” Sharrard said. “We can predict, but unless we go through the process, we don’t actually know the full answer.”

Students are holding the university accountable themselves. In January 2018, amid pressure from students to divest from fossil fuels, University of Pittsburgh Chancellor Patrick Gallagher created the Socially Responsible Investments Committee to provide guidance in developing a socially responsible investment strategy. The committee’s report, which was released to the public in July, is here.

In March, a referendum held by the University of Pittsburgh Student Government Board determined that 91% of the 2,400 students who voted are in favor of the university divesting from fossil fuels.

Phyllis Barber spearheads Highmark Health’s numerous sustainability initiatives. One area of her focus is reducing GHG emissions by conserving energy, she said. Highmark’s headquarters Downtown at Fifth Avenue Place and in central Pennsylvania are both ENERGY STAR certified, meaning they are considered more energy-efficient than 75% of similar buildings nationwide. By the end of the year, the company's data center in Harrisburg is expected to be added to the list.

Barber’s work as sustainability manager focuses on Highmark Health’s offices, not its hospitals or treatment centers.

Last year, Highmark Health won the Large Business category of the Sustainable Pittsburgh Challenge for the third year in a row. The competition awards points to organizations for sustainable actions like reducing energy and water usage and monitoring indoor air quality.

“It kind of shows that every individual action, every project does add up to quite a significant achievement,” Barber said. 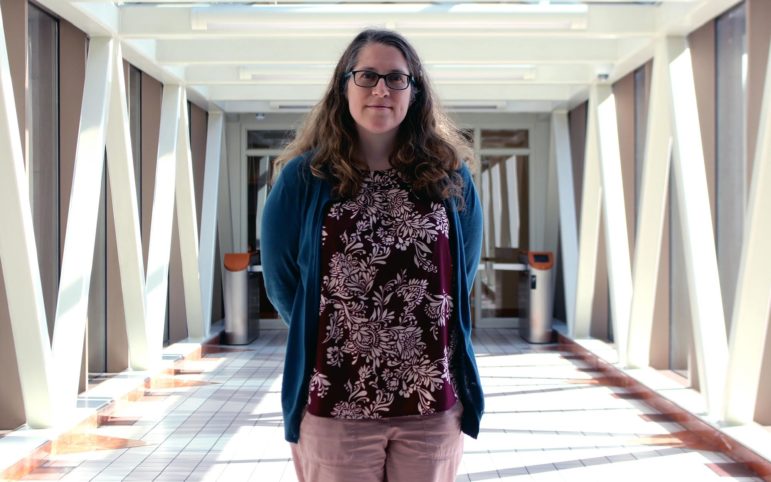 To make green commuting easier for employees, Highmark Health installed electric vehicle (EV) chargers at two of its locations and is working on a third. Additionally, its bicycle parking and sponsorship of Pittsburgh’s Healthy Ride bike share program helped it become certified as a Bike Friendly Business by the League of American Bicyclists.

Moving forward, Highmark Health intends to further connect its sustainability work with government initiatives at the state and local level. “One of the things that we’re going to be doing, and we’re kind of in the process of, is to take a look back at what we’ve done and really looking at our strategy and aligning with the state plan and the City of Pittsburgh Climate Plan,” Barber said.

Barber said Highmark Health believes that investing in sustainability helps both the community and its business interests.

“Sustainability gets to the triple bottom line: people, planet and profit. So I think that’s why these initiatives have been so successful,” Barber said. “We’re not just doing things that are best for our people, we’re also doing things that have a good business sense.”

Energy is a primary focus of UPMC’s sustainability practices, according to John Krolicki, who oversees facilities for UPMC Presbyterian, UPMC Shadyside and UPMC Children’s Hospital of Pittsburgh.

Krolicki wrote in an email to PublicSource that the company is “committed to monitoring, managing, and optimizing energy performance in all real estate under its control.”

Compared to other commercial buildings, hospitals consume a lot of energy. In a report published by the U.S. Energy Information Administration, large hospitals accounted for less than 1% of all commercial buildings and 2% of commercial floorspace, but consumed 4.3% of the total delivered energy used by the commercial sector in 2003. In 2007, that number jumped to 5.5%, according to the most recent figures available. 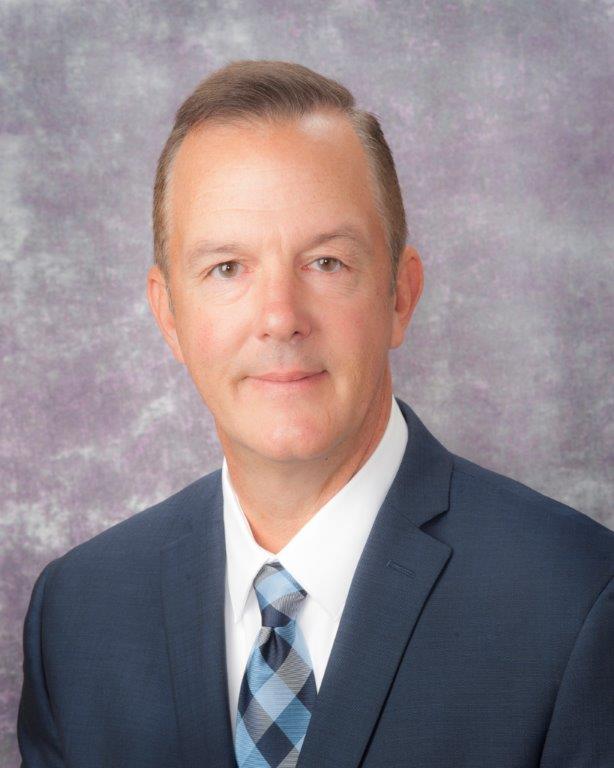 John Krolicki, a vice president of facilities and support services at UPMC. (Photo courtesy of UPMC)

Last year, UPMC Mercy started using the new Uptown District Energy Center power plant. It provides the facility with energy-efficient chilled water, steam and emergency power. District energy is more sustainable than traditional systems because it provides shared heating, cooling and electric to several buildings in one area, which leads to lower emissions than if each building had its own systems.

“In lieu of constructing its own power plant on the UPMC Mercy campus, UPMC made the bold and thoughtful decision to partner with energy producer NRG and become the Uptown corridor’s first district energy plant customer,” Krolicki wrote.

Krolicki wrote that UPMC supports its employees in using other forms of transportation besides single-occupant vehicles.

UPMC provides bike racks and Level II electric vehicle charging stations and has transit shuttles for hospital employees. Most of its locations have access to public transportation, according to Krolicki, and employees are offered pre-tax payroll deductions for public transportation passes.

Transportation options to the UPMC Mercy campus are anticipated to increase with the creation of the proposed Bus Rapid Transit (BRT) line. The planned BRT route runs through Uptown and includes lanes for cyclists.

This story was fact-checked by Remy Davison.