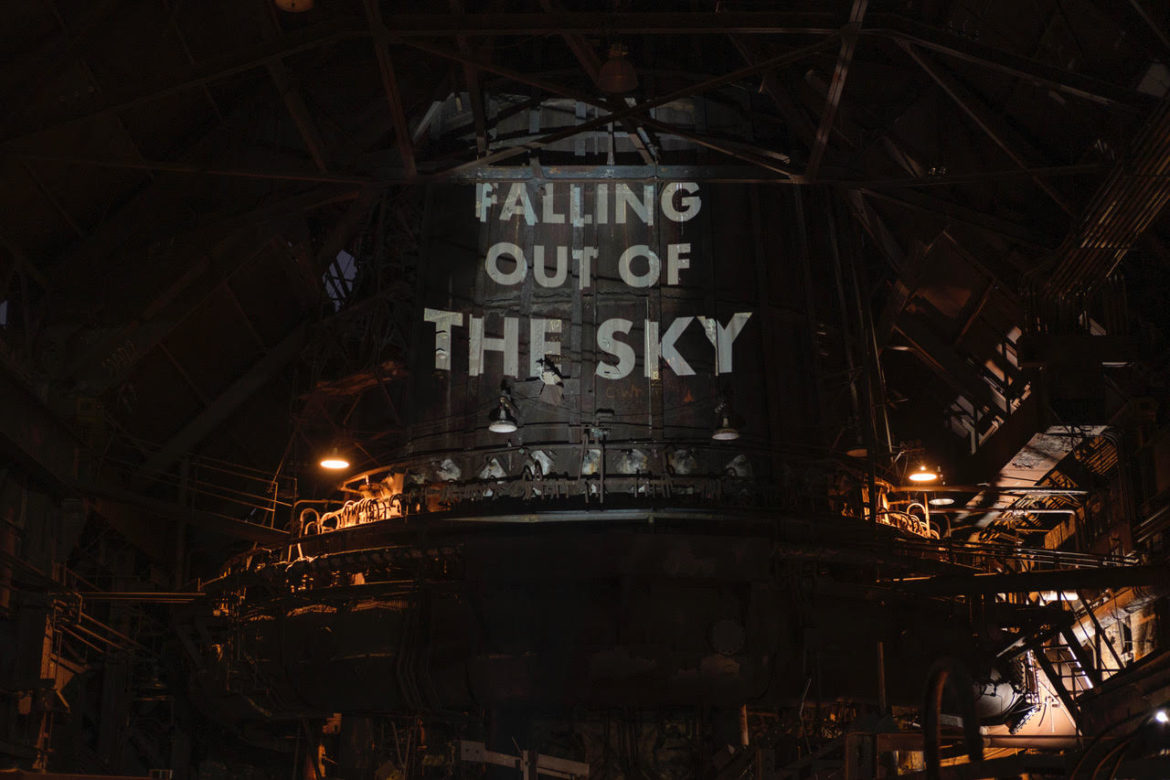 Artist Aaron Henderson showed a prototype of his art projections at the Carrie Furnaces in 2020. (Courtesy photo)

On Tuesday afternoon, Pittsburgh’s Office of Public Art is convening a panel of three artists who recently undertook projects in conjunction with local nonprofits to create art that drew on both their own creative skills and the nonprofits’ environmental expertise.

PublicSource spoke to the three artists about how they hope to transform the public’s relationship to the natural world.

“I think the advantage is just that we’re coming at these problems obliquely, at a slightly different angle, so our creative response to these things will necessarily be different than if this was simply some sort of didactic tool,” said Aaron Henderson, one of the artists.

In 2018, Ginger Brooks Takahashi posted a photo of herself wearing a mask on a farm she was working on in Braddock. In the photo, she is pointing to dark smoke coming from the Edgar Thomson Steel Works. It was a touchstone for local activists, who shared her photo widely, she said. But it also sparked backlash, including from employees at the plant. 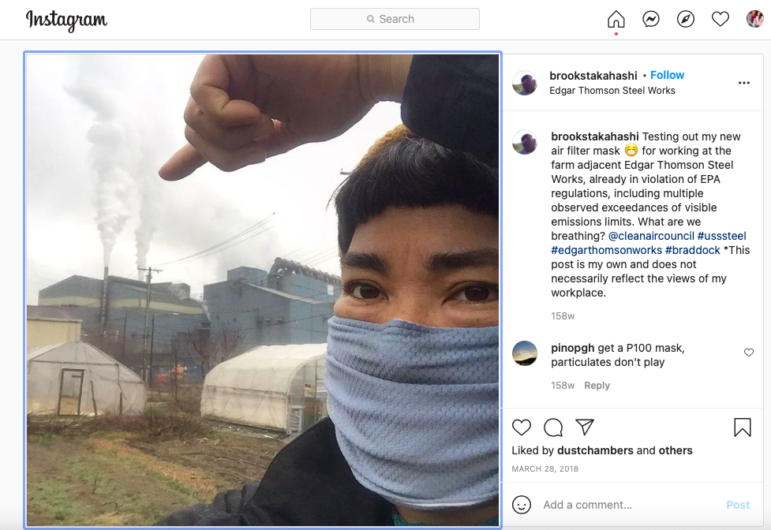 A screenshot of Brooks Takahashi's Instagram post, which led her to create a 10-minute art piece that was eventually acquired by The Carnegie Museum.

“Their union hall is right next to the farm, so it felt very scary to go to work because they are very threatening comments,” she said of the responses posted on social media.

Some commenters singled out her race: “I am assuming the dude with the mask on is from the country Japan whose nuclear power plant is still dumping toxic waste in the ocean” and “I lived in Braddock all my life. Go back to eating your dogs and cats.”

She turned her experience into an art piece about her decision to put on a mask to protect her lungs and the responses it provoked.

So Takahashi was already experienced at turning the natural environment into provocative art as she walked around Wilkinsburg to learn about the Nine Mile Run watershed. She was surprised to learn that there is an underground stream that runs through the borough before it comes to the surface in Frick Park. There were once plans to bring the stream back to the surface in several places, but they never secured funding.

She’d never heard of “daylighting” a stream before. She had an “aha” moment when she realized that there were already access points to the stream below: manhole covers. And when she lifted one, she said, it was if she had entered a different world.

“This beautiful brick shaft leads down and there is this water flowing underground. It was a different temperature, a portal to this underground world. For me, I thought, ‘This is it, a ready made artwork, it’s already here.’” 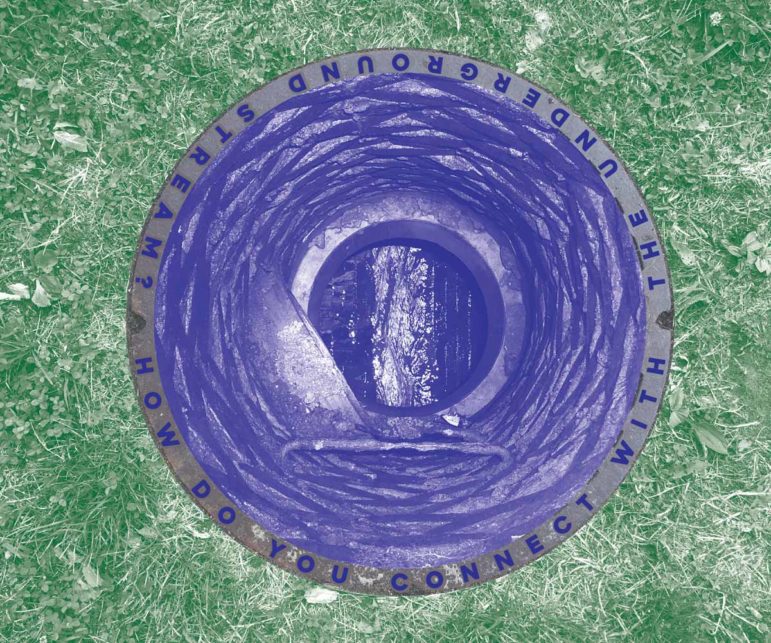 Takahashi worked with the Pittsburgh designers, Clear Story, to come up with an ADA-accessible design for the manhole covers. (Courtesy image)

She found three manholes — at Hunter Park, Whitney Park and on West Street between Ross and Penn aAvenues — where the pipes just contained stormwater and wouldn’t be contaminated with sewage, as it is in certain places along the stream when it rains. At first, she thought a clear glass would let people see the stream below, but the temperature difference made the glass fog up. So she came up with a steel subway grating with a water design and the words: “How do you connect with the underground stream?”

Aaron Henderson’s style of visual projection art is well-suited to the problem of air pollution in the Mon Valley, he said, where groups sometimes struggle to get the word out. “The things that I’m making are very graphic,” he said. “I wouldn’t describe them as subtle.”

Henderson, an associate professor of studio art at the University of Pittsburgh, won’t be going full renegade, like artists who have used projectors to stamp criticisms of Donald Trump on his buildings, for example. Henderson, who collaborated with North Braddock Residents for our Future and the Breathe Collaborative, will get permission from the property owners first.

Over the summer, he plans to project giant words onto several buildings or structures to draw people closer to the images. And as people get drawn closer to the words, he hopes they’ll listen to the sounds of community members whose voices will be saying those words.

“The idea is to take these individual stories and make them bigger,” he said. 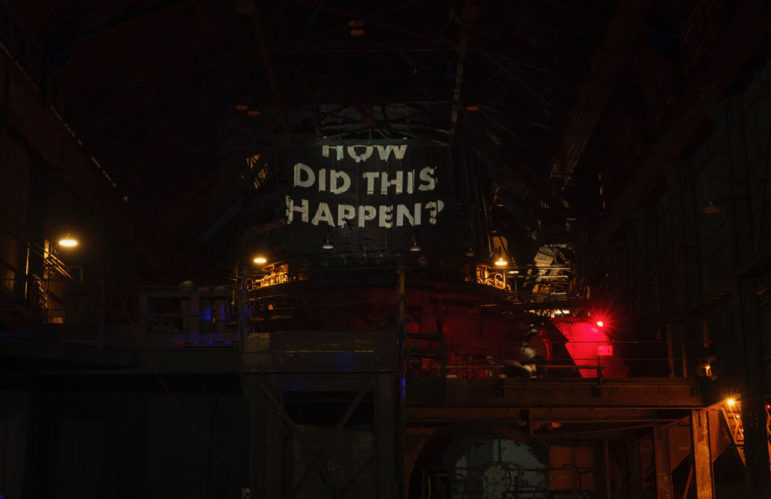 Artist Aaron Henderson showed a prototype of his art projections at the Carrie Furnaces in 2020. (Courtesy photo)

For example, he said, one woman told him she regretted buying a white car when she moved to Braddock because it became so dirty every day from the air pollution. Another woman had a slightly different view: She acknowledged that the Edgar Thomson plant laid the foundation for prosperity in the town decades ago but still thinks the plant has a responsibility to address its effect on air quality. He hopes these stories will bring in a wider audience than activists or workers who might reflexively either dislike U.S. Steel or protesters.

Henderson did a test run of the concept at the Carrie Furnaces last year and got some feedback: People wanted to know what they could do. So, this time, there will be groups that work on air quality issues tabling and giving people a chance to get involved.

He’s still finalizing the projection sites, including one in downtown Pittsburgh, and hopes that the projections will draw a large crowd over the summer. "I really hope we’re in a position where people are out and the city is beginning to wake up a little bit and shake off the hunkered-down mentality we’ve been in so long,” he said.

The pandemic made Mary Tremonte’s art project more relevant than ever: Everyone, it seemed, was beginning to garden.

Tremonte worked with Grow Pittsburgh to create a zine (a self-made magazine) about soil health and the toxins, such as the lead that is often found in Pittsburgh's soil. "Community gardens are often on empty lots, so there is a high chance there is heavy metal contamination on the site,” she said. 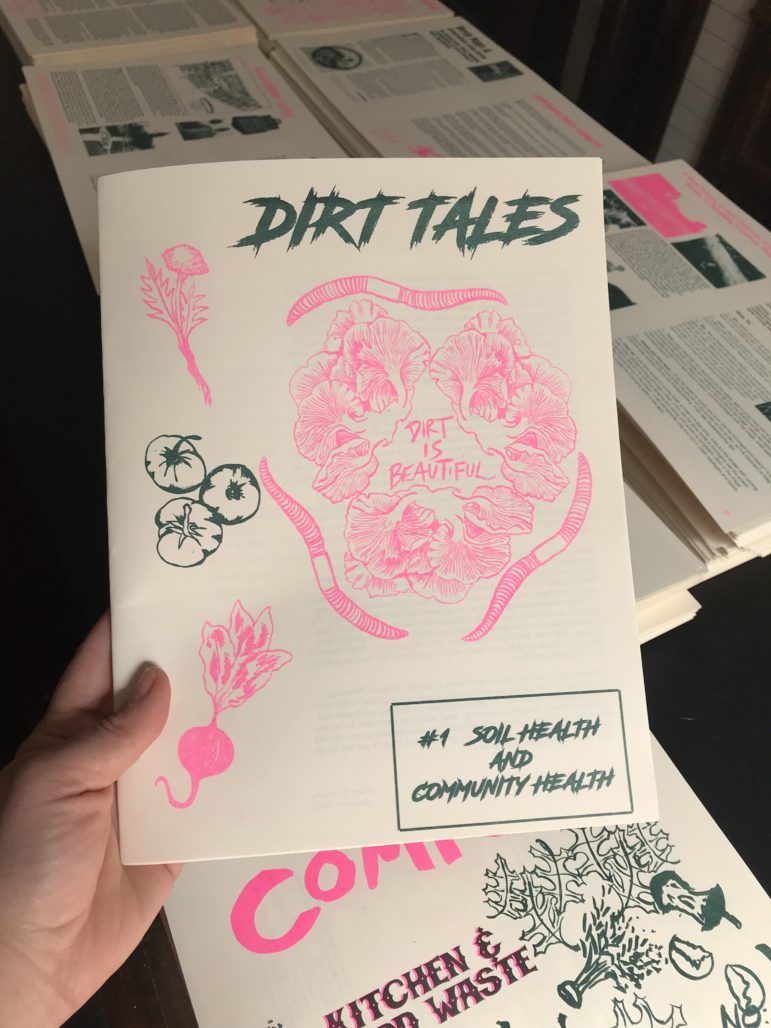 Tremonte and Grow Pittsburgh also wanted to connect isolated community gardens together. But the pandemic made the process of gathering these stories trickier. She had planned to put on storytelling events to bring community gardeners together across neighborhoods. The hope was to build community across a network of community gardens, which create green space in impoverished areas.

Instead she ended up acting more like a journalist, interviewing local experts separately for their stories. She learned that the serious gardeners said “soil” and hated the term “dirt.” And that the worms she was so proud of in her own backyard garden were actually invasive worms that made plants harder to grow.

She's printing two issues, one about soil health and one about contamination, which will be available for free at community gardens, free libraries and events like the city’s virtual seed swap.

The zines will also be available in the educational dirt—ahem—soil cart she made with instructions to screenprint with dirt and make mud stencils. Through experimentation, she learned that she had to grind up her soil in a coffee grinder to get the right mud consistency for screen printing. 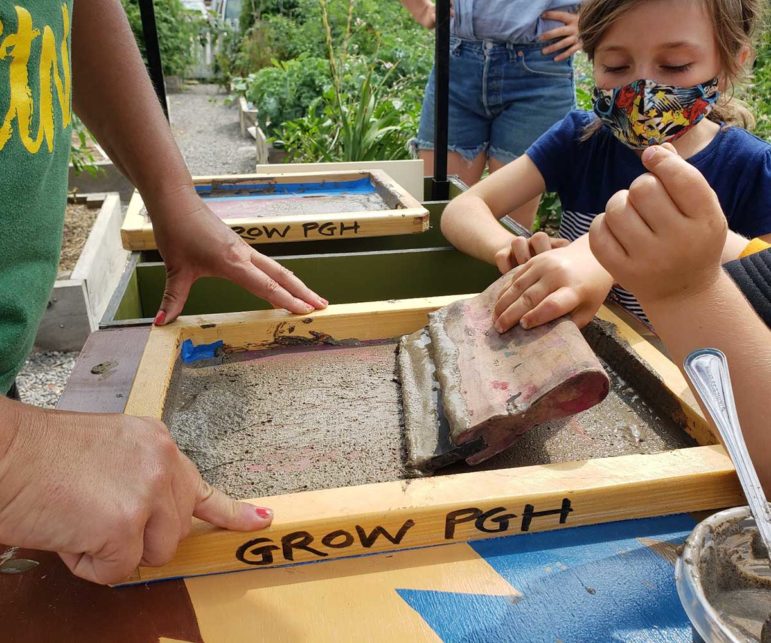 There is a tension, she said, between teaching people to be wary of the toxins in untested dirt and encouraging kids to get their hands dirty with safe and healthy soils.

"The toxins are there, and people aren’t aware of how they can come into contact with them,” she said. "It’s a public education project to protect people from being poisoned. Kids have an extra risk of exposure."