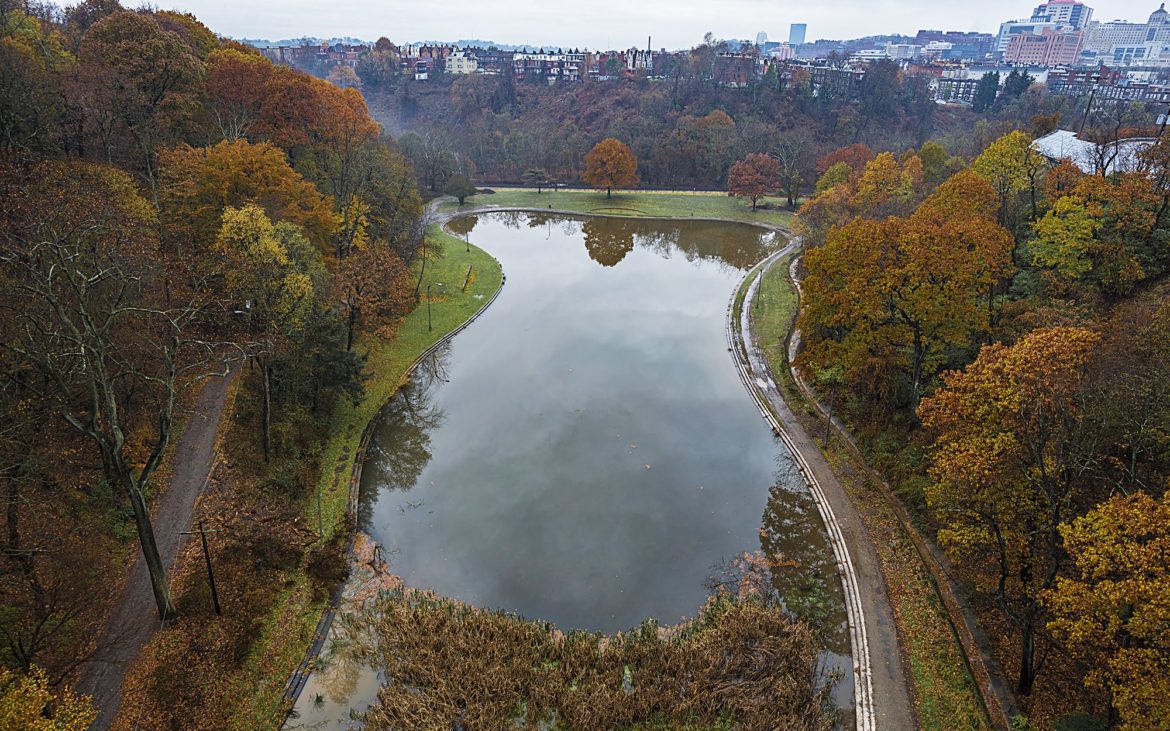 The Panther Hollow Lake in Schenley Park is part of the Four Mile Run Watershed. The Pittsburgh Water and Sewer Authority wants to invest between $20 million and $35 million here in a large green infrastructure project to reduce sewer overflows into the region's rivers. (Photo by Teake Zuidema/PublicSource)

Every year, the sewers in the Pittsburgh region discharge a mixture of at least 9 billion gallons of untreated sewage and stormwater into the Allegheny, Ohio and Monongahela rivers.

Heavy rains or snowmelt prompt the discharge of nastiness into the rivers where we kayak, fish and, most importantly, draw from for drinking water.

The excess stormwater overloads the capacity of the sewers and bypasses the treatment plant. The system, managed by the Allegheny County Sanitary Authority [ALCOSAN], covers Pittsburgh and 82 other municipalities.

The sewage dump is not only a health hazard, it is also a violation of the Clean Water Act.

ALCOSAN, the Pittsburgh Water and Sewer Authority [PWSA] and the 82 municipalities are under a consent decree from the U.S. Environmental Protection Agency [EPA] to stop these combined sewer overflows before 2026. ALCOSAN is hoping to push that back to 2036.

Estimates of what it will cost to stop those sewer overflows vary from $2 billion to $3.6 billion. This money will have to come from the ratepayers. In early 2017, the ALCOSAN fee already went up 17 percent. On top of that, PWSA customers will pay 50 percent more by 2020.

Progress, at a reasonable cost, depends on a multi-agency effort to determine which solutions are the most effective. The major fork in the road: Green or gray infrastructure? Green solutions look like green roofs, rain barrels and wetlands. Gray refers to the concrete tunnels and underground reservoirs — more proven, traditional methods.

But green projects have the potential to not only reduce sewer overflows, but also to reduce air pollution, absorb carbon dioxide, lower the risk of floods, increase local property values and create recreational value.

All the while, climate change is expected to test these efforts with more total precipitation and intensifying rain events.

Tim Prevost, a civil engineer and ALCOSAN’s manager for Wet Weather Programs, stares into the depths of the wet well in ALCOSAN’s Woods Run treatment plant on Pittsburgh’s North Side. He sees a yellowish-brown waterfall splash into the well.

This is where sewage goes on a dry day and this is where it should go every day. Not the rivers.

As Prevost steps into the circular building that surrounds the wet well, he points to the bottom of the dry well where a crew is working on a pump: “We have already installed six new pumps down there.” Prevost said enlarging the plant is an important step in dealing with the sewer overflows. However, it only solves part of the problem. When it pours rain, the large sewer pipes still won’t have the capacity to convey all the water to the plant.

Prevost was part of the ALCOSAN team that, in 2012, proposed a $2 billion “gray” solution to the EPA. The plan included enlarging the treatment plant and building miles-long underground reservoirs and tunnels along the rivers to store more sewage and stormwater.

“As civil engineers, we proposed what we knew would work,” Prevost said. “Get the water in the big pipes, get the water from the sewer to the treatment plan, treat the water and discharge it in the river.”

The EPA judged ALCOSAN’s plan as deficient because it would only partially solve the sewer overflows. Completely solving the problem with a gray strategy would have cost $3.6 billion. The EPA and ALCOSAN agreed that would place too much of a burden on customers. The Woods Run wastewater treatment plant runs beside the Ohio River on Pittsburgh’s North Side. (Photo by Teake Zuidema/PublicSource)

The Clean Rivers Campaign, a coalition of environmental groups, also opposed ALCOSAN’s plan. They wanted less gray and more green infrastructure. Some county and city officials agreed with the coalition.

In 2016, Allegheny County Executive Rich Fitzgerald and Pittsburgh Mayor Bill Peduto wrote a letter to the EPA and the state Department of Environmental Protection, asking for a 10-year window to evaluate the effectiveness of the treatment plant expansion in combination with green infrastructure solutions.

PWSA, the agency that owns and operates the sewers in the city of Pittsburgh, is taking a leadership role in embracing green infrastructure to keep sewage out of the rivers. But the agency’s financial troubles cause Prevost to question how much the region should rely on it.

Green infrastructure requires regular maintenance. If neglected, Prevost said the money spent could be for naught.

“PWSA has big issues out there: the water, the amount of debt they have,” Prevost said. “There are a lot of things PWSA has to address. Do you honestly believe that one of their major points of focus is going to be ensuring that their green infrastructure is always maintained?”

PWSA has $147.8 million of its capital budget for 2018 to 2022 earmarked for green infrastructure projects. To validate the cost, PWSA puts a value on the environmental, social and economic benefits from green projects; it says, over a period of 50 years, the green projects would be valued between $390 million and $850 million. Based on its modeling, PWSA believes that the combination of the plant expansion and green projects can considerably reduce the overflow problems.

“Our goal is to manage about a billion gallons of sewer overflows with green infrastructure,” said Megan Zeigler, a landscape architect and PWSA’s Green Infrastructure Technical Coordinator. To achieve this, she explains, PWSA will need about 183 acres of green infrastructure surface, or half the size of the Allegheny Cemetery spread throughout the city.

Though PWSA plans to take on large green projects, its $1.1 million Hillcrest project in Garfield is a first step. The project, at the corner of Hillcrest and Donna streets, turns two adjacent, empty lots into a biofiltration rain garden.

“This project will capture the water that falls on impervious surfaces in the area,” Zeigler said, nodding in the direction of a big, muddy hole that at the time still needed to be covered with soil, plants and trees. “It will retain the water for a while, so it doesn’t flow into the combined sewer all at once.”

The microbes in the soil and the plants on the surface will also remove pollutants from the water, among other benefits, Zeigler said. A crew of contractors at work at the Hillcrest Street green infrastructure project, led by the Pittsburgh Water and Sewer Authority. (Photo by Teake Zuidema/PublicSource)

In the Hillcrest project, PWSA is spending roughly $1.37 per gallon of sewer overflow it keeps out of the rivers.

PWSA expects costs to be lower in larger projects, like the one planned for the Four Mile Run Watershed. That project, which includes Schenley Park and Panther Hollow Lake, is expected to reduce the annual sewer overflows by 32 million gallons. The capital costs will be between $20 and $35 million.

Despite Prevost’s criticism, ALCOSAN is working with and funding PWSA on its green strategy. ALCOSAN gave PWSA a grant of $200,000 for the Hillcrest project.

Prevost now oversees Green Revitalization of our Waterways (GROW), programming that has given 59 grants to projects throughout its coverage area for source reduction.

Source reduction can be done with green infrastructure, but also by repairing leaky sewer pipes, preventing streams from flowing directly into the sewer, removing debris from sewers or by completely separating the systems for stormwater and wastewater.

Prevost says most of the GROW grants have gone to green projects from PWSA: “Green infrastructure ends up getting the most money from our GROW program because PWSA proposed a whole bunch of green projects.”

“There are a lot of things PWSA has to address. Do you honestly believe that one of their major points of focus is going to be ensuring that their green infrastructure is always maintained?”

The applications for the GROW grants are judged by their cost effectiveness. Prevost said the original ‘gray’ plan cost less than 40 cents per overflow gallon. “So, if you have an eligible project that costs 40 cents or less, we’ll grant you the maximum match, 85 percent of the costs of the project.”

Most of the proposals ALCOSAN has received for green projects cost considerably higher than 40 cents per overflow gallon.

“In cycle one, they were hovering around $1. In the second cycle, they were around 80 cents per gallon reduced,” Prevost recalls. ALCOSAN evaluates those projects purely on how much they reduce overflows. It doesn’t look at possible extra benefits for the neighborhoods.

For a recent report about Allegheny County’s wet weather troubles, RAND ran computer simulations to see which measures to reduce sewer overflows would be the most cost-effective.

RAND’s tests showed the expansion of the treatment plant and the cleaning of ALCOSAN’s interceptors (the large pipes that carry the sewage to the plant) as significantly cost-effective: 20 to 25 cents per gallon reduced.

“[Green infrastructure] is a bit more of a mixed picture in terms of cost effectiveness,” said Jordan Fischbach, co-author of the RAND report and co-director of its Water & Climate Resilience Center. In a scenario that would use exclusively green projects to solve sewer overflows, costs can vary from 14 cents to $1.59 per gallon, according to the report. Fischbach acknowledges the RAND report did not look at, or try to quantify, any co-benefits of green projects like reducing surface flooding, creating green jobs or improving water quality and neighborhoods.

Even though there is uncertainty about costs, Fischbach still believes a green-first strategy make sense: “It is good for the city in general to put in those green infrastructure projects and it will have a bunch of benefits for city residents.”

RAND’s report also provides a more accurate glimpse into the present problem and just how bad it may get.

Fischbach’s group also ran thousands of simulations to see how the sewer overflows will be affected by climate change and population growth. “We looked out about 25 to 30 years with different scenarios and, depending on the scenario, we saw that overflows could continue to grow at 15 to 40 percent greater than 2003.”

ALCOSAN, in the meantime, is still negotiating with the EPA about its final plan to deal with the sewer overflows. The EPA has expressed a willingness to extend the deadline for solving the problem from 2026 to 2036. That means the costs could be spread over 10 extra years.

It also means 10 extra years in which your sewage can end up in the river.