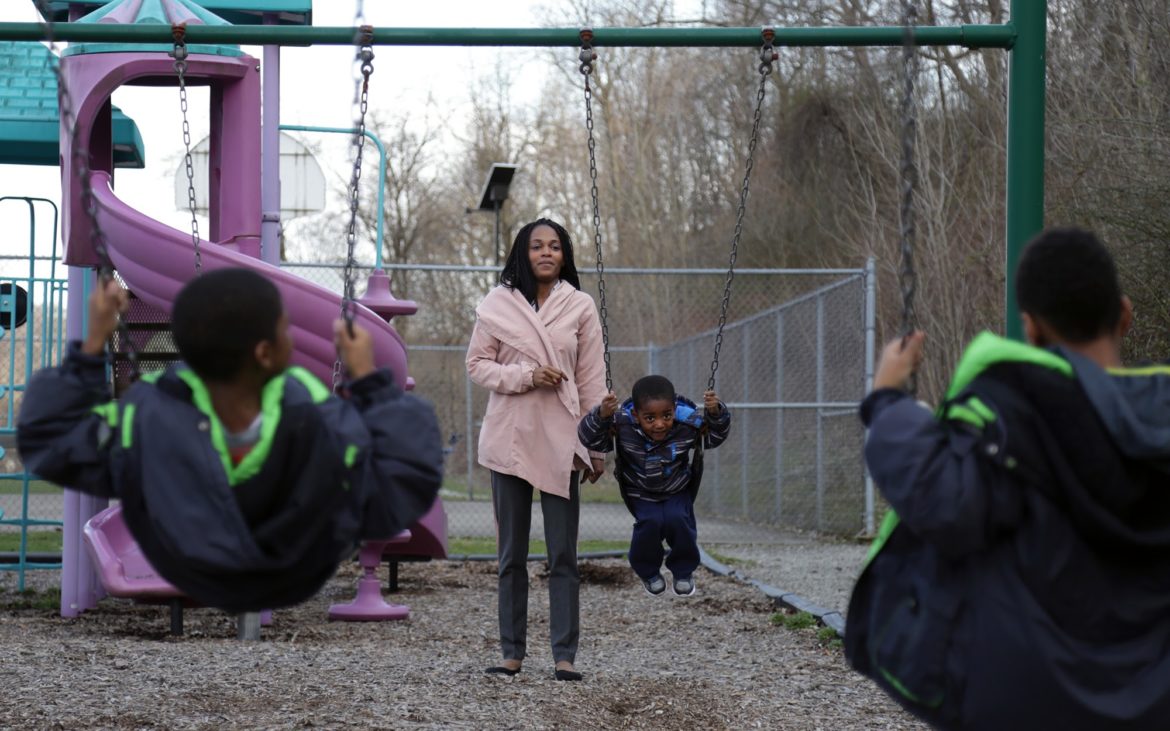 Andrea Barber, 31, pushes her 3-year-old son Cody on a swing. Her sons Corey, 7, (left) and Camerin, 10, (right) play on the swings in the foreground. Andrea moved to a township northeast of Pittsburgh in August 2016 after discovering there was lead in the paint of her former house in Larimer. (Photo by Ryan Loew/PublicSource)

Andrea Barber’s son Camerin has always been “hyper,” as she puts it.

From his first day of grade school, it seemed like Camerin, who is now 10, could never concentrate on what the teacher said. At first, Barber explained it away as childhood exuberance. But after he finished the first grade, Barber, 31, had a revelation about her oldest son:

“He couldn’t read anything, he couldn’t write at all.”

That year, Camerin was diagnosed with a learning disability and dyslexia.

Four years later, Camerin is in the third grade but is reading at a first-grade level.

Barber had thought her son’s condition may be genetic. But over the past year, as the rising lead levels in Pittsburgh’s water became more known to the public, Barber has suspicions about the root of Camerin’s condition.

She remembers making his formula with tap water. She didn’t know that infants on formula get 40 to 60 percent of their lead exposure from tap water. Andrea Barber, 31, reviews the word “delta” with her 10-year-old son Camerin, emphasizing how to pronounce each of the word’s syllables. Andrea has a wall in her home that’s covered in words, letters, names and math problems, and she plays games with her sons to make sure they continue learning outside of school. (Photo by Ryan Loew/PublicSource)

The fact is, Barber will likely never know if Camerin’s condition is the product of bad genetic luck or a preventable toxicity in the environment. Either way, she’d have the same responsibilities. So looking forward, she wants to make sure other young, possibly single mothers like her, see the risks lead can pose to their kids — and heed the warnings.

“I’ve seen a lot of stuff about lead but it never really triggered anything within me,” Barber said. “It’s kind of like one of those things that you don’t pay attention to until it happens to you. I wish more young moms, when they see stuff like that, look into it more and not just expect our city officials to take care of the problem.”

Camerin is Barber’s oldest. He has two brothers: Corey, 7, and Cody, 3. As her kids were growing up, Barber and her family were mobile, moving between apartments, duplexes and homes in Stanton Heights, Penn Hills and Wilkinsburg.

She’s not sure if any of the homes from before Camerin’s diagnosis had lead. But her gut and the condition of those homes tell her they may have. The experience at her last home in Larimer feeds into her hunch.

Because of its age, the landlord should have told Barber there was a risk for lead paint. But she says they never gave her the federally required notice of the risks of lead.

By 2015, Barber had some concerns about carbon monoxide from a home test kit she bought. So, Allegheny County Health Department inspectors visited her home. And when they did, they also checked for lead paint. The test was positive.

“There was lead everywhere, even on the outside of the house,” Barber sad.

She got her boys tested, and none showed elevated lead levels. Lead in blood decreases by half after a month or two. Caring for three boys leaves her little time to dwell on it, but the discovery opened up her eyes to the possibility that lead from paint or water could have had an effect on Camerin. Cody Barber, 3, smiles while his mother Andrea Barber pushes him on the swings. Andrea worries her sons were exposed to lead paint while living in a house in Larimer for about two years. (Photo by Ryan Loew/PublicSource)

As the volunteer vice president at East Liberty Family Support — where she teaches families about healthy eating and lifestyles — Barber didn’t think of lead as a topic that felt important amid the “motion of life.”

“I’m working three jobs. I got to pay the bills. I gotta catch up on my sleep. I gotta feed the kids. I gotta break up fights. I gotta go to school,” Barber said.

So the threat of this one tiny element didn’t seem pressing.

Despite those nagging doubts that lead caused her son’s condition, she says she is not going to beat herself up or point fingers.

Her first move was making sure Camerin repeated the first grade. Looking ahead, she knew her son needed those early lessons to sink in to prevent him from getting caught in a cycle of misunderstanding.

“He wouldn’t have understood the work, and he would have been upset...and he would express that through his behavior and acting out,” Barber said.

"I wish more young moms, when they see stuff like that, look into it more and not just expect our city officials to take care of the problem.”

Then, she slowly started to eliminate every source of lead she possibly could. Barber and her kids moved from Larimer about a year and a half ago. Their new home is outside of the Pittsburgh Water and Sewer Authority’s coverage area. Regardless, a NSF-certified filter from the Women for a Healthy Environment initiative sits on her faucet to filter out lead.
These days, Barber always carries water bottles with her when out with her kids.

When either Camerin or his brothers run to a water fountain, she’ll pull them back and reach into her bag for a water bottle.

“Of course they run to them every time,” Barber said. “But I try to tell them, ‘We’re going to try and stop drinking from water fountains.’”

In her home, she has a wall covered in words and letters, where she plays games with Camerin to make sure learning doesn’t end at 3 p.m. Playing the role of a game show host, Andrea Barber, 31, asks her son Corey, 7, to introduce himself before he takes a turn playing the “Wall of Words” game in their home. (Photo by Ryan Loew/PublicSource)

The two also frequent the library together, where Barber is trying her best to make sure her son reads as much as he can. Last summer, they went through 44 books — some starring superheroes, others Pete the Cat.

Barber’s concerns about her boys and health also translate to a small business she runs. She manages health-conscious vending machines, that include SunChips, nuts and granola bars to hungry Pittsburghers. Barber plans to hand over the business — My Three Sons Vending — to her children when they are older.

It’s enough that, despite the challenges Camerin faces, she can still smile when she thinks of the coming years.

“I’m making a bright future for him,” Barber said.

3 thoughts on “Genetics or lead? One Pittsburgh mother’s question about her son’s learning disability.”