Atop a forested hill in Pennsylvania’s Laurel Highlands, the smells of cooked coal and hot steel blend over the molten glow of a blacksmith forge.

That’s the work station for blacksmith Dennis Gilkey, a wiry 66-year-old with neatly cropped white hair and a bushy mustache. He was a farrier for 25 years, the work that coiled his fingers with arthritis. Gilkey began learning the blacksmith trade in 2001. It is less taxing on his body than shoeing horses, he says.

These days Gilkey buys his steel from a local source, heats it with coke fuel, which is made from coal, then shapes it. He used to make bigger items with bigger price tags, like hand railings and church gates. Around 2008, in response to the economic downturn, Gilkey diversified his craft to include smaller items like coat racks. 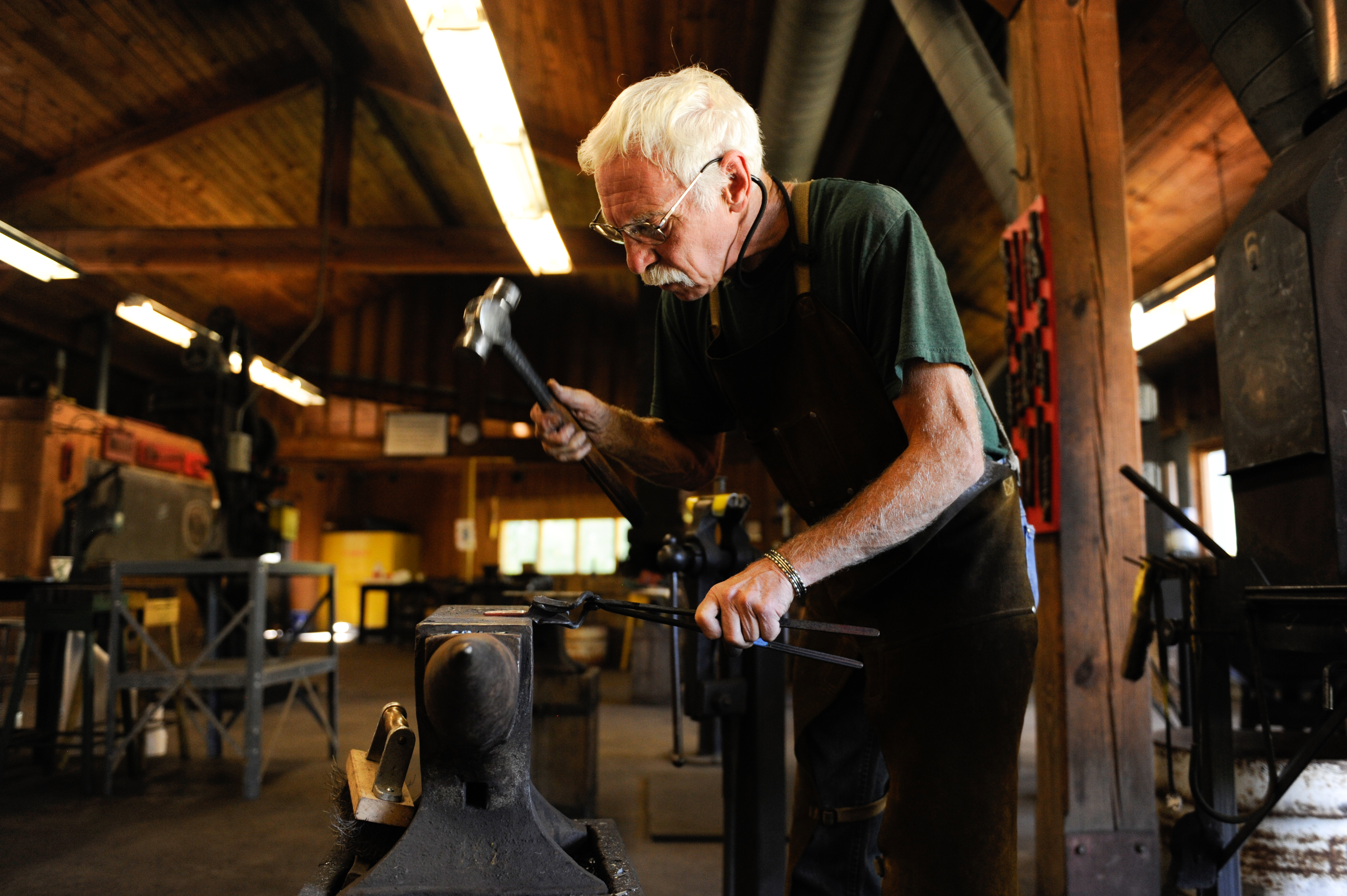 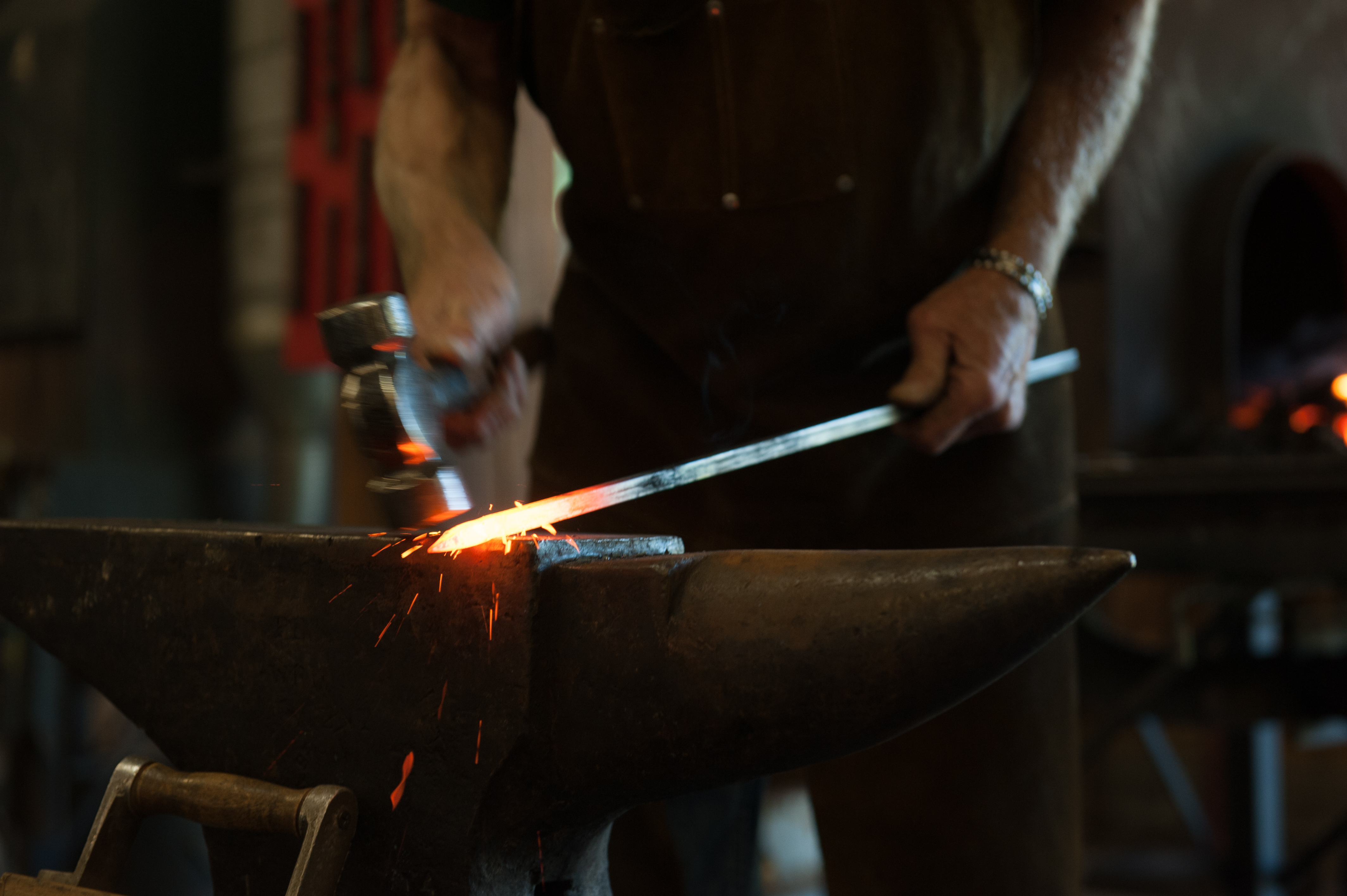 Gilkey has been a blacksmith since 2001. (Photo by Sarah Collins/PublicSource) 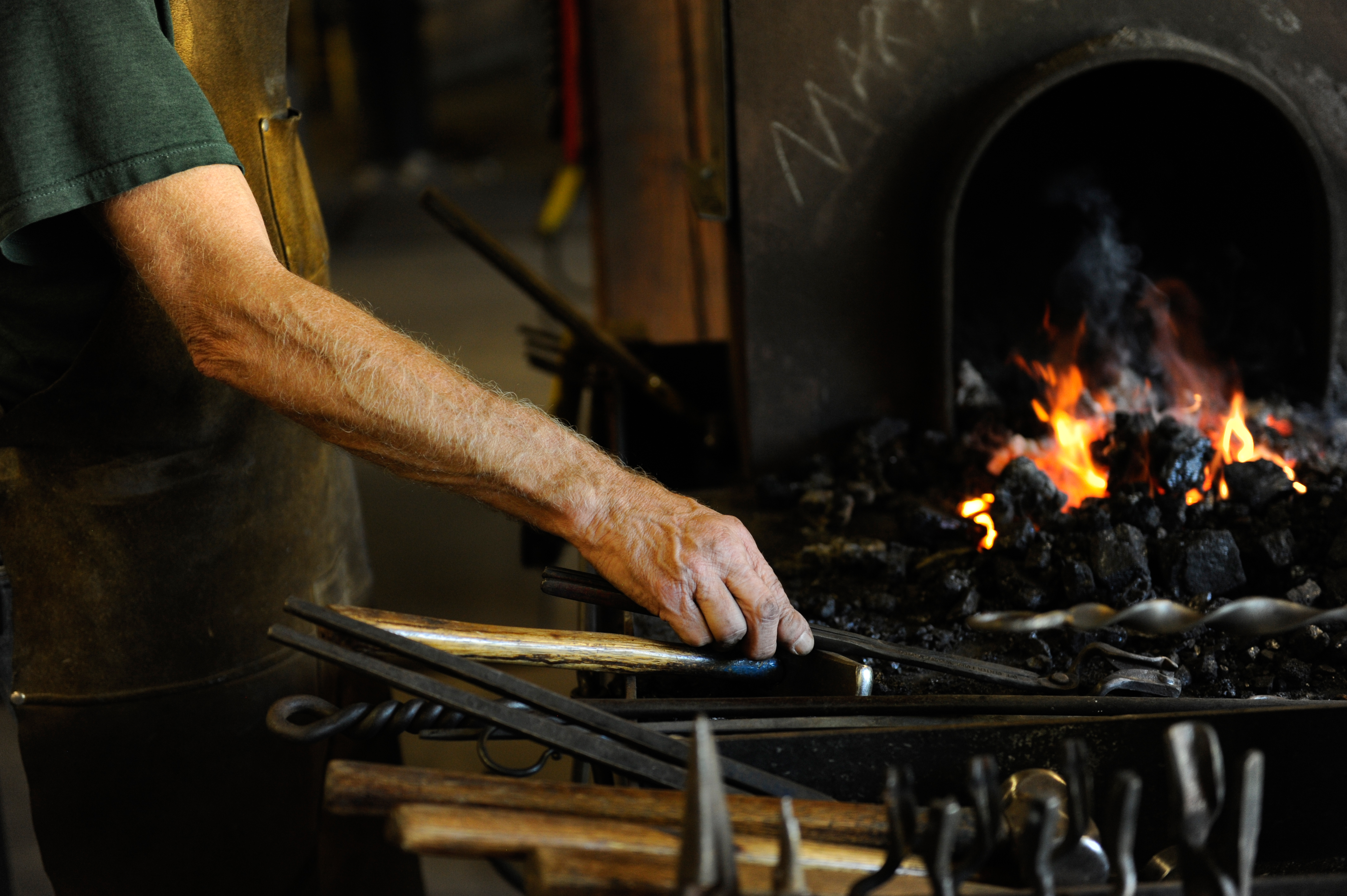 Gilkey pushes a bar of steel into fire to get it searing hot. (Photo by Sarah Collins/PublicSource) 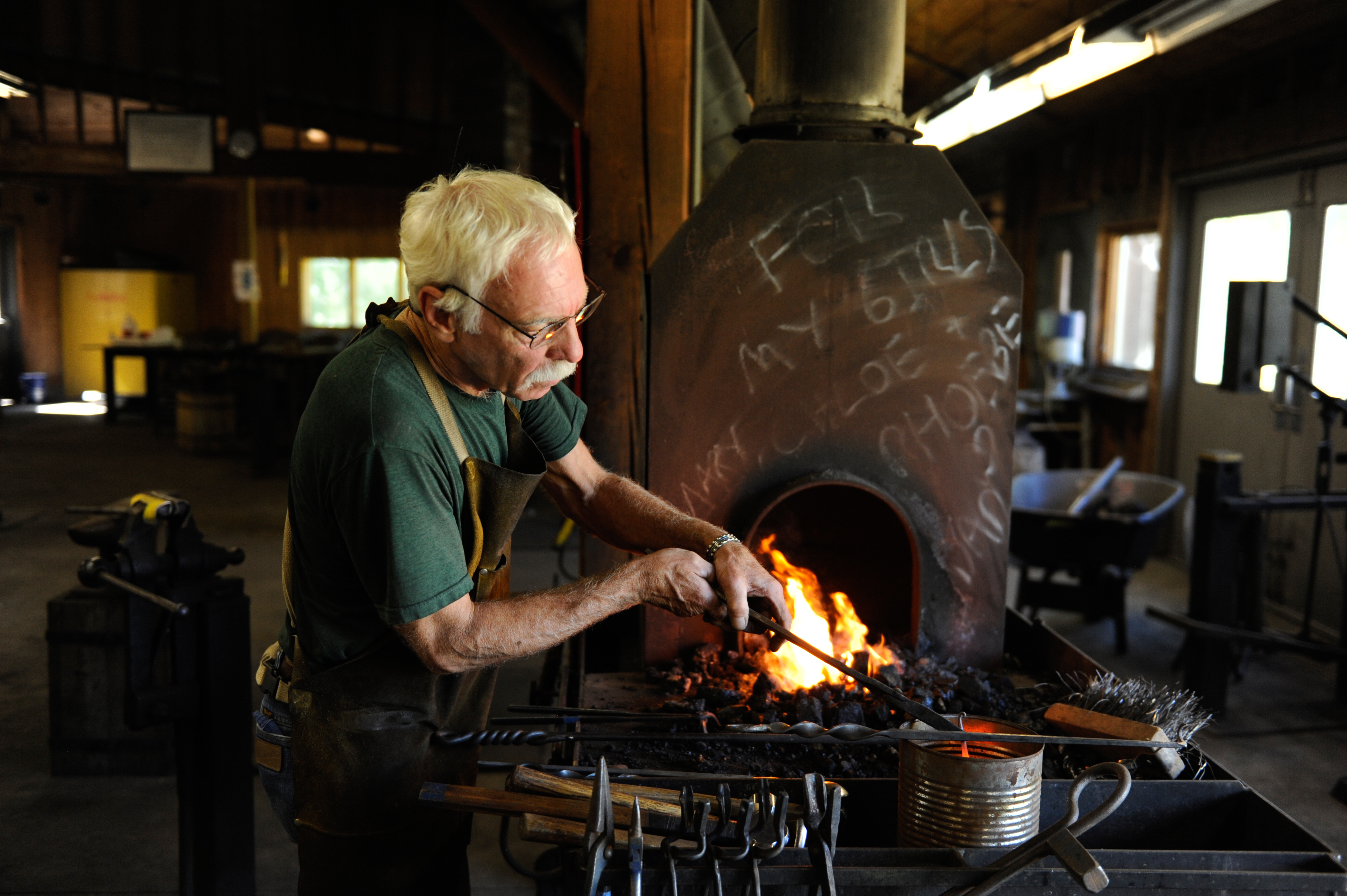 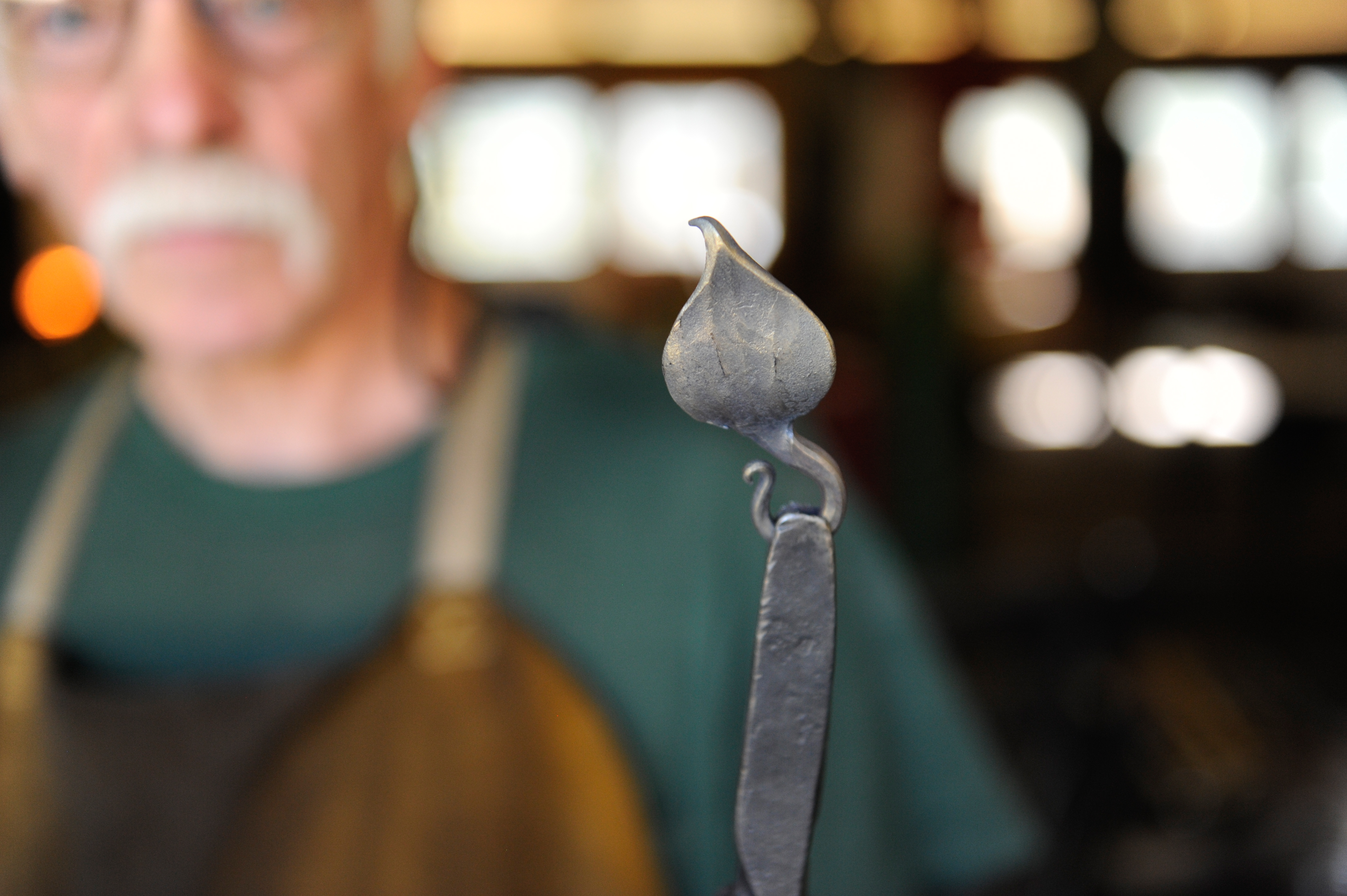 Gilkey displays the key ring he made. (Photo by Sarah Collins/PublicSource)

He starts by heating a bar of steel until it becomes white hot. He dips each searing end into a 1-gallon bucket of water, releasing steam and cooling the bar, so the center will twist but the ends will remain rigid. Water cools steel quickly.

As is the case for Gilkey’s art, steel is the raw stock for much of our lives, including appliances, automobiles, bridges and buildings. So industry needs to produce a lot. And making steel requires a lot of water.

While experts differ on the amount of water needed, one 1999 report from the American Iron and Steel Institute said the entire steelmaking process, which includes ironmaking and coke-making, uses 75,000 gallons of water for each ton of steel produced.

Steel is the raw stock for much of our lives, including appliances, automobiles, bridges and buildings.

In Pittsburgh and statewide, the steel/primary metals industry leads all other industries in total water withdrawn from Pennsylvania’s surface and groundwater, according to data from the state Department of Environmental Protection (DEP).

Eight companies in Pennsylvania that make iron, coke or steel withdrew a combined 130 billion gallons of water in 2014, according to a PublicSource analysis.

The DEP began requiring industries to report water withdrawals of 10,000 gallons and more per day after Act 220 of 2002 was passed by the state Legislature. Up until then, how much water we had, needed and used went largely untracked in Pennsylvania.

Pennsylvania steel companies withdraw the majority of the water they need from rivers. Most of it is discharged back into the rivers, but the water can be tainted in the process.

Though the DEP now tracks withdrawals, the agency’s regulatory authority is minimal.

While the department permits public water suppliers and regulates water use at fracking operations, industrial water users only have to register with the DEP if they’re going to take more than 10,000 gallons per day, according to David Jostenski, DEP Planning and Conservation Division Director.

The only fee collected by DEP for surface water withdrawal is from public water systems, which are required to pay a $25 application fee for a water allocation permit. That fee hasn’t changed since it was instituted in 1939 as part of the Water Rights Act.

If adjusted for inflation, the application fee would be $433 today. However, because of the way the 1939 legislation was written, changing the fee in any way requires a legislative action.

There are two ways of making steel. One of them uses iron ore to make raw steel. The other recycles older steel into specialty steel. Both require significant amounts of water.

When Gilkey got into the farrier business in 1976, the steel he used to shoe horses was likely raw steel from Pennsylvania.

Forty years later, after most of the steel mills have closed, there’s only one ore-based steel mill left in the Pittsburgh area: U.S. Steel’s Edgar Thomson Works in Braddock, which has an annual raw steel production capability of 2.9 million net tons. (Photo by Adam Sacco/flickr. PublicSource added the text on top of this photo.)

That works has two other facilities associated with it. At the Clairton Works, they make coke for the Edgar Thomson plant to use for energy. At the Irvin Works in West Mifflin, they roll the steel produced at the Edgar Thomson Works.

U.S. Steel declined requests by PublicSource to tour the facilities and to comment on the company’s water use.

Gilkey recalls his visit to a steel plant along the Allegheny River, in New Kensington.

“They’ll come up with a big ingot, about maybe a 5-foot square block. White hot out of the furnace. Then they get a big hydraulic press and they press it,” he said.

“It’s all about cooling. They have to cool it.”

Ultimately the steel Gilkey witnessed being made was flattened to 1/16-inch thick and rolled into coil, much like occurs at the Irvin Works.

And with all that white hot steel, “It’s all about cooling. They have to cool it,” Gilkey said.

The Edgar Thomson Works withdrew 67.6 billion gallons of water to cool the steel it produced in 2014.

Despite such large withdrawals, the steelmaking process returns roughly 90 percent of its water, according to a 2015 report by the World Steel Association.

The water that's not returned to the watershed is considered to be "consumed."

“So there is a little bit of consumptive use, but primarily the steel plant is returning the vast majority of the water they had withdrawn,” said Jostenski.

Rob Walters, executive director at Three Rivers Waterkeeper, said when industries use water for cooling, they return warmer water to the river. “Obviously, that’s not the same water that came in and the warmth is going to impact the ecosystem,” he said.

In addition to heat, Walters is concerned about the potential cocktail of chemicals that are discharged.

Industries are permitted by state and federal regulators to release pollution into waterways. That's because it's assumed the pollution will be diluted by the large bodies of water.

While at the forge in Farmington — 80 miles upstream from the Edgar Thomson works on the Monongahela River — Gilkey prefers to use a steel that contains 5 percent chrome.

The massive amount of water discharged into a river can carry zinc, tin or chromium along with nitrates, which can be detrimental to aquatic life, and benzene, a known carcinogen.

Those two industries make up most of the 8.1 million pounds of chemicals released into state waterways that year. Allegheny County took the brunt of it; more than a third of those chemicals were released into county waters.

The Ohio River basin, which includes the Monongahela, Allegheny and their tributaries, provides drinking water to millions of people between Western Pennsylvania and the Mississippi River.

To provide potable water to the public, water utilities use chlorine to treat surface water for microorganisms. The public water system is also required to filter certain chemicals to meet thresholds set by the EPA.

So while it may seem beneficial that industry doesn't just outright consume the water, their discharges actually create work down the line. If drinking water utilities don't deal with harmful chemicals correctly, then public health is at risk.

Gilkey is getting just a taste of this responsibility as seasonal facilities manager at the Touchstone Center for Crafts in the Laurel Highlands, about 30 minutes from the Youghiogheny River.

He stands in a damp pump house surrounded by forest as the whir of a diesel engine drowns out the gurgle of a nearby stream. A backhoe lurches down a dirt road that has been gouged in the hillside to access a strip mine for coal.

Though there is small-scale coal mining adjacent to Touchstone, these headwaters of the Youghiogheny remain relatively pure.

Gilkey still needs to ensure that Touchstone’s well water is safe to drink. Groundwater typically does not require filtering, so, for Gilkey, potable water is just a matter of chlorination to kill microorganisms.

He's making ends meet with this position, this task that has led him to treating water so that he can pursue blacksmithing the rest of the year. And again he finds these two mediums inextricably linked. Water and steel.