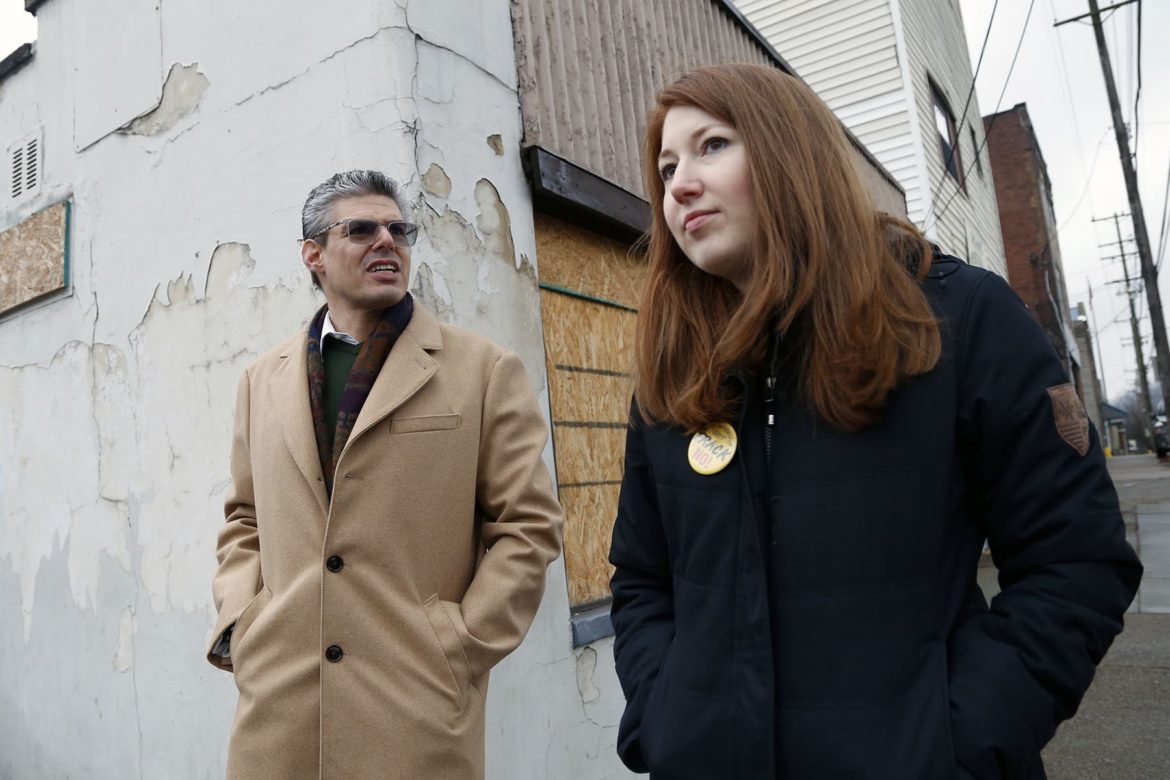 On either side of the invisible border between North Braddock and East Pittsburgh, you can see, hear and sometimes smell the Edgar Thomson Steel Works below. But the prevailing view of a proposal to frack on the mill site is dramatically different on the two sides of that line.

East Pittsburgh’s leaders, guided by an environmentalist group, in January tried to hamstring the two-plus-year-old proposal to drill for natural gas on the U.S. Steel mill site. That borough’s five-member council, in 2017, backed drilling with just one dissenting vote. But a council with three first-term members voted Jan. 21 for a one-two punch of zoning-related measures with the potential to knock the site entirely out of East Pittsburgh, potentially forcing the would-be driller back to the beginning of the arduous permitting process.

Some North Braddock officials, by contrast, have taken the position that revenue from fracking could help their borough address blight. Nobody yet knows the amount of money the neighboring boroughs could get if fracking was permitted on the mill site, but “if it was a sizeable amount, it would open opportunities: Perhaps go out and borrow some money and tear down some houses,” said North Braddock Borough Manager Doug Marguriet, whose municipality struggles with 400-odd vacant buildings.

East Pittsburgh Councilwoman Stacey Simon isn’t swayed by estimates that fracking on the site could bring her borough $60,000 or more. “Our budget is small, but it’s over $1 million and, to me, that’s really not worth it when you think about the long-term impact [fracking] could have,” Simon said. “Nobody wants to buy a house near a fracking well, or most people don’t.”

U.S. Steel has argued that having a fuel source right on the Edgar Thomson property, powering its operations, would strengthen the company’s operations in its home region.

“Having available clean burning and competitively priced energy resources would provide our Mon Valley facilities, and the many good paying, union jobs they support, with a key advantage in a fiercely competitive global steel market,” U.S. Steel spokesperson Amanda Malkowski wrote in response to questions from PublicSource. “This project would also provide a financial benefit for the local communities and the taxpayers of those communities due to the natural gas production.”

The Mon Valley boroughs of East Pittsburgh and North Braddock — both including parts of the Edgar Thomson mill, both financially struggling, both with poverty rates around 30% — have watched with interest as Merrion Oil & Gas has applied to frack on the eastern end of U.S. Steel’s property.

The New Mexico-based Merrion wants to drill a well 6,700 feet deep with underground lateral pipes extending out nearly 2 miles. The company could end up sinking 18 wells on the site, according to Merrion Operations Manager Ryan Davis. Most of the site is in North Versailles, which has approved the well, but a slice is in East Pittsburgh, and many laterals would run under North Braddock. 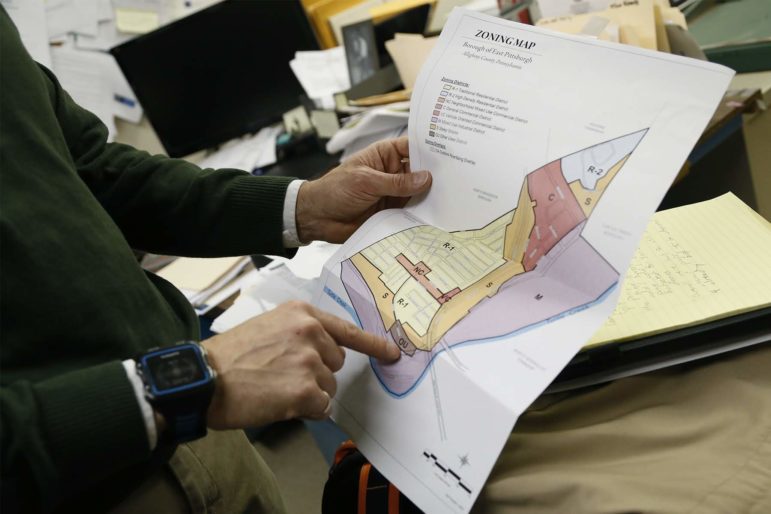 East Pittsburgh Borough Manager Seth Abrams points out a section of a zoning map of the borough. (Photo by Ryan Loew/PublicSource)

Merrion hit a speed bump on Jan. 24, when the state Department of Environmental Protection [DEP] told the company, for the second time, that its Erosion and Sediment Control Permit application was deficient. The company, according to the DEP’s four-page list of shortcomings, needs to work on its erosion and sedimentation plans, site drawings, geotechnical reports and hydrology calculations. Davis said his optimism level was “relatively high” that the company would clear the regulatory hurdles.

East Pittsburgh, with a population of 1,763 residents, just made it tougher.

Municipalities can’t ban oil and gas drilling, but they can restrict it to certain zones and lay out conditions. East Pittsburgh includes 7 acres of the proposed well construction site, and Merrion in November 2017 applied for a conditional use permit to disturb land and store water on those acres. The following month the borough council gave its OK.

Simon’s father was president of council then — he has since left office — and she said he voted for the conditional use in part because he believed the borough stood to gain around $60,000 in revenue. Meeting minutes don’t include specific dollar figures but show that officials believed the borough would get annual impact fees and royalties from Merrion. Through his daughter, Dennis Simon declined to comment.

McDonough argued that the borough’s code calls for the expiration of any conditional use that hasn’t commenced within two years, and because Merrion hasn’t done what was permitted in 2017, its permission “has officially expired.”

McDonough also urged council to proceed with proposed zoning code changes that would ban oil or gas wells within a half-mile of public facilities; within 1,000 feet of any residential property line; and within a quarter-mile of any of four “choke points” that carry most of the traffic into and out of the borough. The proposed setback from residential property is double East Pittsburgh’s current rule.

There are procedural steps, including a public hearing and final council vote, required before the changes take effect. Council’s vote to proceed with them, like its vote to end the conditional use approval, was unanimous. Simon made both motions. 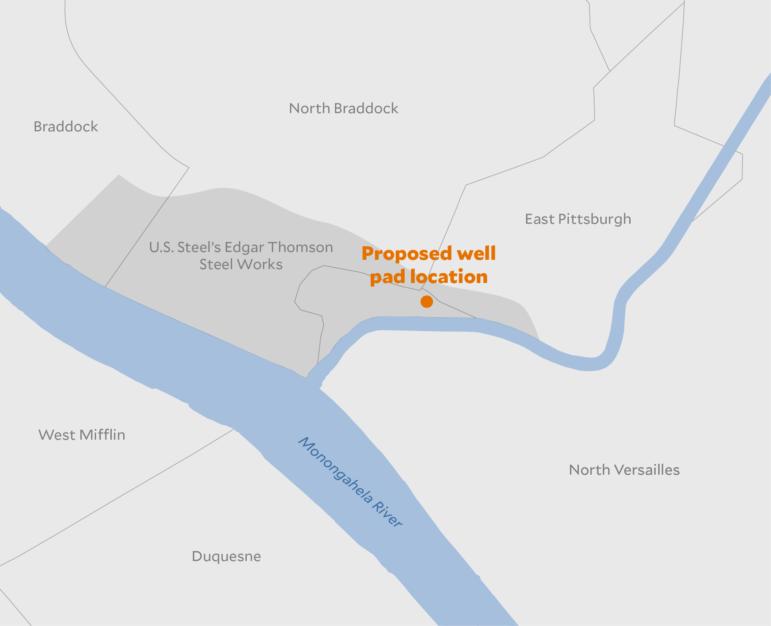 Could the combination of the expiration and the new rules topple Merrion’s plans?

“I think it could,” said Simon, adding that the company “would have to start from scratch” on a new site plan that did not include any part of East Pittsburgh.

Davis said Merrion is “currently working to respond” to the council’s actions and declined to preview the company’s plans. “But at this point, we don’t think it’s going to impact things, at the moment.”

Merrion had been inching forward, most recently by approaching North Braddock and East Pittsburgh for permission to do seismic testing within their boundaries. Seismic testing is a way of mapping the subsurface by sending shock waves into the ground and measuring the echoes off of the underground rock. It allows drillers to more accurately predict the location of gas-rich shale.

East Pittsburgh council, in a Nov. 19 vote, said no. After Edith Abeyta of North Braddock Residents for Our Future argued late last year that seismic testing could damage roads, North Braddock’s council sought to impose conditions on the testing. Merrion’s contractor then canceled its plans, according to Marguriet. Davis said Merrion can move forward without the testing.

North Braddock officials, though not unanimous on the subject, have “a consensus that [fracking at Edgar Thomson is] not going to be a bad thing for the borough of North Braddock, that it could be a good thing for the borough,” said Mayor Tom Whyel. While no part of the well site would be in North Braddock, laterals — pipes extending horizontally underground — would almost certainly run under borough-owned property, opening the door for leases under which Merrion would pay royalties.

Marguriet said there have, as yet, been no discussions between Merrion and the borough regarding the amounts of lease payments. He added that scores of borough property owners have entered into leases with Merrion, and some have already received checks.

Davis said municipalities stand to get bonuses for signing leases, royalties based on well production, and impact fees determined by a state formula. The most recent data released by the Public Utility Commission, from 2018, shows that municipalities received $4,768 in annual impact fees per well they hosted.

North Braddock, which has a population of 4,696 residents, could use the money. Among nine municipalities near the Edgar Thomson site surveyed by PublicSource, North Braddock has the third-highest property tax rate, but the second-lowest per capita budget.

”We have to buy a new backhoe and our police overtime is through the roof and we have to fix some roads,” said North Braddock Councilman Chris Roland, who argued that the borough should not act to stop the fracking.

The struggling borough, Whyel said, “could utilize [drilling-related] funds for many different things — demolition, street repair, road repair, infrastructure repair. …If they’re coming anyway, why not benefit and be a part of it?”

He added: “I still believe it will happen some day.”

Simon said she’s worried about the environmental implications of fracking on the site. She said she grew up with two asthmatic siblings and hopes that her son, born in November, grows up with cleaner air.

“I look at him every night like, is he breathing? Is he breathing? But, you know, it’s just because I’m a new mom,” she said. “But I hope the air quality doesn’t have bad effects on him while he’s here, breathing.”