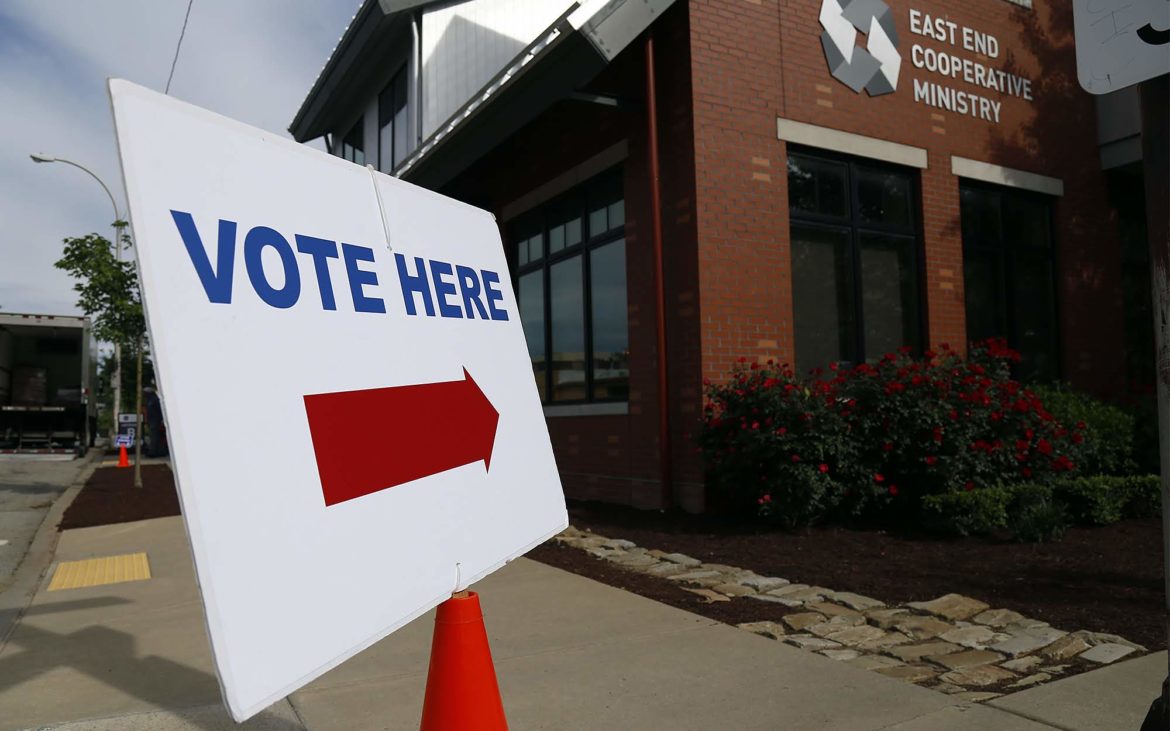 A polling place in East Liberty for the May 21, 2019 primary election. (Photo by Ryan Loew/PublicSource)

Update (5/13/2020): The Pennsylvania Department of State has not yet signed off on Allegheny County’s plan to significantly reduce the number of polling places for the June 2 primary, which is less than three weeks away. Ellen Lyon, a Department of State spokeswoman, said only four counties — Allegheny, Cameron, Forest and Philadelphia — have requested an exemption to exceed a 60% reduction in polling places. The state, Lyon said, is working to get additional information from Allegheny and two other counties before making a determination.

Hallam, who also serves on the county’s Board of Elections, said she wasn’t aware of whether the county had a back up plan if the county fails to gain state approval.

“This is a disaster,” Hallam said.

With the June 2 primary less than six weeks away, the shift from in-person to mail-in voting has election officials scrambling to process tens of thousands of applications for absentee ballots.

During an April 23 teleconference with board members, election officials said that the county had mailed 20,000 ballots and processed about four in 10 mail-in ballot applications.

“We are at capacity,” David Voye, the county’s election manager, told board members, noting his team processed about 4,500 applications on Wednesday only to have 2,000 more pour in.

The county has doubled the number of employees handling the influx of applications, and County Executive Rich Fitzgerald has pledged additional hands to aid in the effort.

“We will be actively sourcing other employees, including seasonal staff, and temporary staff as appropriate,” Amie Downs, county spokeswoman, said in an email.

Processing the deluge of applications, though, is only part of the headache ahead.

Who will work the polls?

Before the county suspended training for the new voting system, officials had trained approximately half of the 3,400 confirmed poll workers.

The majority of poll workers in the United States, though, are older, putting them in the demographic most at risk for serious illness and death from the disease that, as of Friday, had killed 1,492 Pennsylvanians. About six in 10 poll workers nationally are aged 61 and older. There’s no reason to believe Allegheny County’s poll workers skew younger.

Voye said a number of poll workers have already informed him they aren’t comfortable taking a health risk to work the primary.

Fitzgerald said he hoped to conduct the primary with just 500 to 700 workers versus the 6,500 – mostly volunteers – who typically work an election.

Where will in-person voters queue up?

The county pivot to a mail-in ballot, and a move to reduce the number of polling places to encourage it, means voting would be limited to each municipality’s municipal building and, in Pittsburgh, to one site in each of the City Council’s nine districts.

If the state approves the county’s plan and each municipality gets only one voting location that means the polling places will have been reduced from roughly 850 to 138.

Differences in municipal populations and geographies across the county could pose a challenge on Election Day as some polling places have hundreds of registered voters and others thousands.

“Treating each municipality and City Council district as equal when they are so clearly diverse is inequitable and will lead to an inevitable disenfranchisement of voters, which I am not comfortable supporting now, or at any time,” County Councilwoman Bethany Hallam, who also sits on the Board of Elections, said to PublicSource.

Hallam voted against the consolidation plan.

While the presidential primary is all but a foregone conclusion, there are a number of contested races, including a Democratic challenger for the 18th U.S. Congressional seat held by Mike Doyle and several General Assembly races, among them, Republican challengers for the Pennsylvania Senate seat held by Democrat Pam Iovino.

How many will vote?

Given that the presidential candidates are all but assured, County Councilman and Board of Elections Member Sam DeMarco told PublicSource he believed the county would likely have a light turnout – probably less than the 2016 primary – and one that wouldn’t see long lines, even with dramatically fewer polling locations.

DeMarco voted for polling place consolidation even though he said he’s not a fan of early voting. While the mail-in ballot applications far outstrip the 15,000 who voted absentee in 2008, the fact that one in 10 registered voters have requested ballots so far underscores the challenge of an election with an emphasis on mail-in voting.

“We work with the system we have,” DeMarco said, “not the one we wish we had.”

Update (5/13/2020): This story was updated to reflect new information about the Department of State approval process.