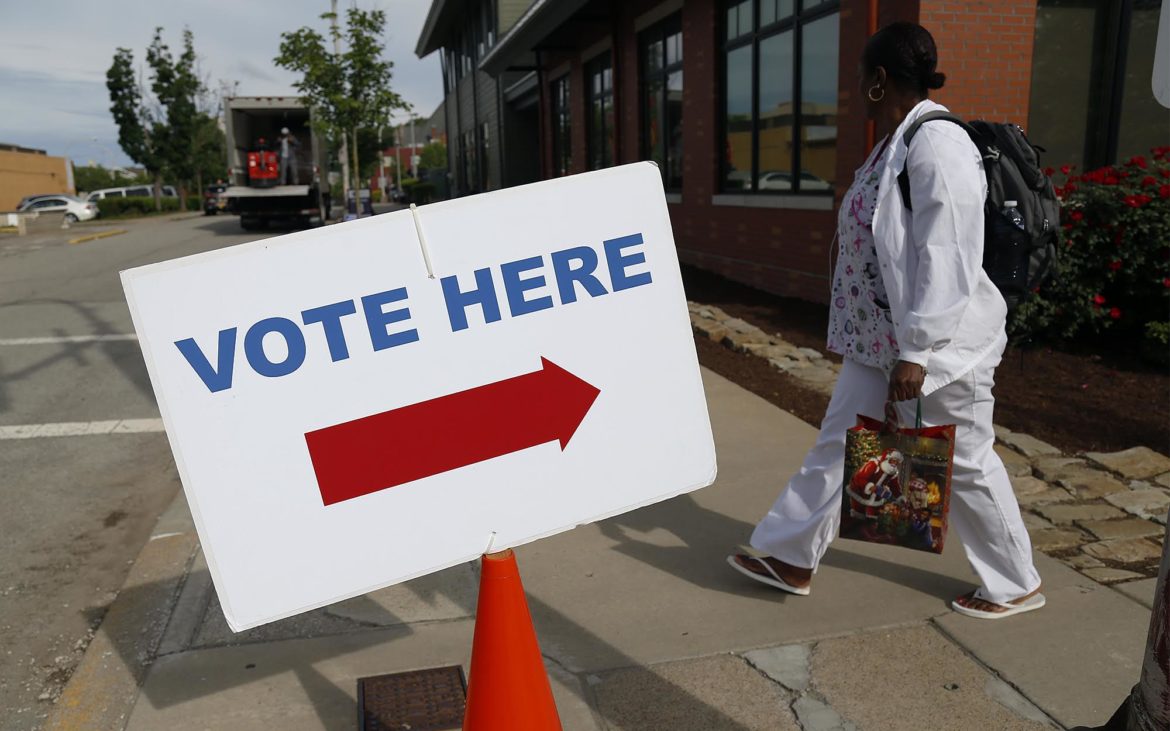 A resident walks near a polling place in East Liberty on May 21, 2019. Voting has changed dramatically in the wake of the coronavirus. (Photo by Ryan Loew/PublicSource)

Update (1/24/2020): The Allegheny County Board of Elections will meet at 2 p.m. on Feb. 11 to discuss the rollout of new voting machines and training for poll workers for the April 28 primary election. The meeting, which is open to the public, will be held in Conference Room 1 in the Allegheny County Courthouse at 436 Grant St.

Allegheny County voters who head to the polls in three months for the primary election will cast their votes on a new $13.4 million system that largely relies on hand-marked paper ballots.

The change from electronic machines, in place since 2006, includes an additional $6.6 million for software, updates and training. Many security experts consider paper ballots to be more secure because they create a paper trail and voters don’t have to rely on a computer to accurately reflect their votes.

County Council members Sam DeMarco and Bethany Hallam have called for a special meeting of the Board of Elections to iron out the details for installing 1,650 voting machines and training election workers and volunteers at more than 1,300 polling locations. DeMarco and the newly elected Hallam sit on the county’s three-member Board of Elections, along with County Executive Rich Fitzgerald.

The Board of Elections typically only meets two weeks before and 20 days after an election. It's unclear when the special meeting will be scheduled, but Hallam indicated it could be as early as next week. Board of Elections meetings are public.

Ahead of the 2020 primary election, the state instructed all Pennsylvania counties to install voting machines with a paper trail. By 2022, counties are also required to adopt a system to automatically audit the accuracy of election results.

“We didn’t have a choice,” DeMarco said of purchasing the new machines. “We were put under the gun.”

DeMarco said the goal is “to minimize any chaos.”

The county’s purchase of voting machines from Election Systems & Software [ES&S] – the largest voting equipment vendor in the United States – is being financed for about $1.7 million over eight years, or $13.4 million, according to the contract. A separate contract shows the cost of software, updates and training will be an additional $6.6 million.

The Board of Elections approved the purchase on Sept. 25, despite concerns over the selection because of what has been reported about the company’s ethics and conduct. The board decided ES&S was the only company that could handle the size and complexity of the county’s elections.

Roughly $1.5 million in federal money will offset some of those costs. And, Pennsylvania Gov. Tom Wolf has pledged $90 million to reimburse counties for approximately 60% of the replacement costs.

It is unclear how many of the 1,650 voter terminals the county purchased have been delivered. DeMarco said the county had expected to receive roughly 100 machines in early December for training and to plan for the upcoming primary.

David Voye, the county's division manager for elections, referred questions to Amie Downs, county spokeswoman, who wrote in an email: “When appropriate and available, we will provide that information to all media.”

Korinski said he thought the contract ensured that the county would get what was promised by ES&S.

“It seems to me,” Korinski said, “that the county is fairly committed to making sure 2020 goes off without a hitch.”

As the county works to implement its new machines, it also faces the threat of a lawsuit from Judicial Watch, a conservative legal watchdog group.

A Dec. 11 letter from Judicial Watch asserts that it examined the county’s voter rolls and found that 98% of eligible voters were registered to vote, which the group found to be “implausibly high.” Judicial Watch also found the 72 voters removed from the rolls in the last two-year reporting period was “absurdly low.”

A 2018 survey by the  U.S. Census Bureau found 66.9% of adults 18 and older and eligible to vote in the nation were registered.

“All the other counties in the country are dealing with the same [election] rules and they don’t have these inflated voter rolls,” Robert Popper, a Judicial Watch senior attorney and director of the organization’s election integrity project, told PublicSource.

“Claims that there are widespread problems with the voter records are just wrong,” Murren said in a statement.

Counties are required, under state and federal law, to maintain their voter rolls. Voters who have had no activity — which could mean they did not vote or else changed their address or party affiliation — in the past five years are supposed to be placed in inactive status.

In a December audit, Pennsylvania Auditor General Eugene DePasquale identified 96,830 “stale, but still active, voter records” across the state. Allegheny County, the audit found, accounts for nearly 44% of those records.

Judicial Watch, Popper said, examined the voter rolls for about 2,600 of the nation’s roughly 3,000 counties and sent 19 letters to large counties with high registration rates.

The group has threatened a lawsuit and gave the county 90 days to respond.

Downs wrote in an email to PublicSource that the county does not comment on legal matters. “It is being reviewed by the Law Department and the office will respond accordingly,” she added.

Hallam said she was skeptical of Judicial Watch’s review.

“Anytime I hear, ‘Purge the voter rolls,’ I am so nervous,” Hallam said. “If we take the voting rights away from a single person, we’ve lost.”