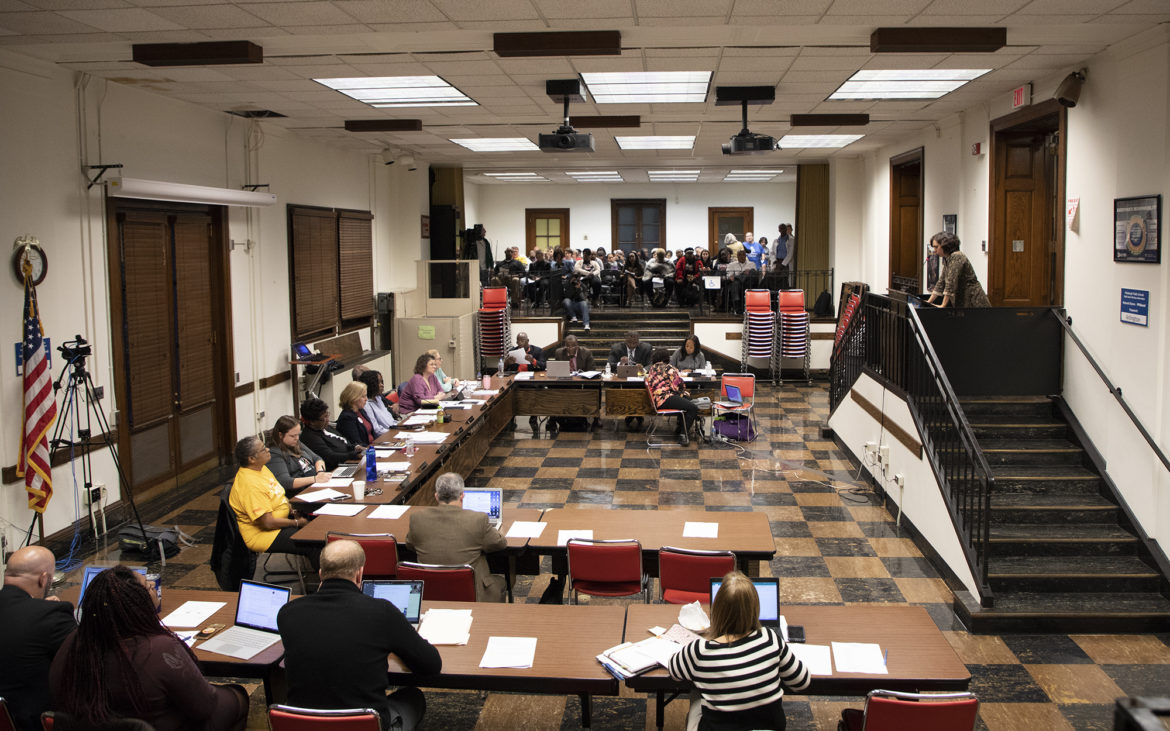 The Pittsburgh Public Schools board held a public hearing to listen to parents, students, community members and police officers testify about their stances on arming officers in the district. (Photo by Kat Procyk/PublicSource)

At a tense meeting about arming officers in Pittsburgh Public Schools Monday night, the head of the school police force changed his story from earlier this month about how many weapons officers had confiscated from students in district schools.

Pittsburgh Public Schools Chief of Safety George Brown Jr. told the school board on Oct. 1 that officers had not recovered any weapons from students in the schools. But on Monday, Brown waved a stack of reports that he said showed 20 times his officers have taken weapons from students in the district schools. He did not give a timeframe for the incidents.

Additionally, Brown told the school board, roughly 70 speakers in attendance and others watching from a remote room that just two weeks ago, his officers confiscated three firearms from young men at a district football game. 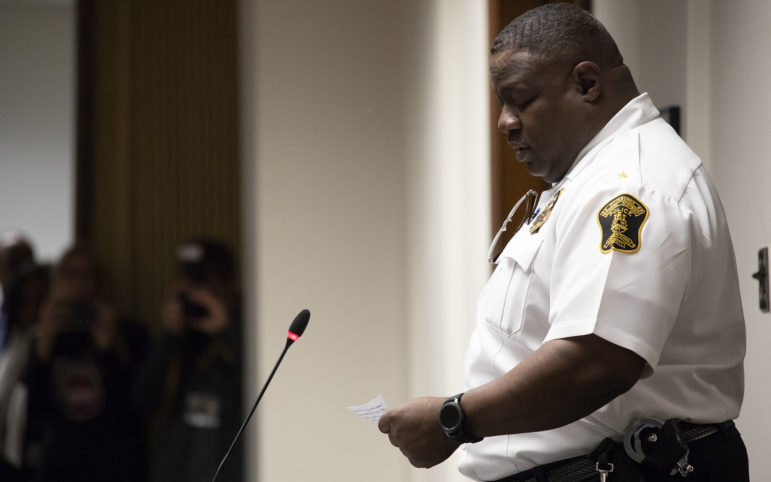 Pittsburgh Public Schools Chief of School Safety George Brown Jr. was the first to speak at the public hearing. Brown made the original request to arm officers at a board policy committee meeting earlier this month. (Photo by Kat Procyk/PublicSource)

He used those reports to bolster his contention that the 22 officers on the district’s school police force should be armed — a move proposed in 2016 by the executive committee of the Pittsburgh Federation of Teachers, which represents the officers. At the Oct. 1 policy committee meeting, the majority of school board members shared their disagreement with the proposed measure.

Brown said on Monday that his officers have had all of the appropriate training and certification to carry firearms, and he again asked the board to amend the district’s current safety policy that does not allow the officers to carry firearms.

“I’m guessing after you guys read some of these police reports you will come to find there is a need,” Brown said.

The school board is expected to vote on the issue at its legislative meeting at 7 p.m. Wednesday.

Brown was the first to speak on the issue of arming school police.

But the majority of the crowd, which included students, parents, educators and community activists, opposed the idea of giving firearms to the district’s police officers. Some took it even further, calling to disband the department and divert its $7 million in funding to counselors and other student support services. 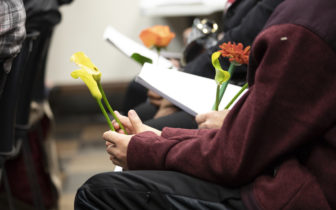 Audience members at a Pittsburgh Public Schools board hearing hold flowers from a protest beforehand. The protest was staged to look like a funeral. (Photo by Kat Procyk/PublicSource)

Many of the speakers participated in a protest before the hearing, where they set up a child-sized casket and a memorial of photographs of nine young people who have been killed by police across the nation. The photographs included Antwon Rose II, who was shot and killed by an East Pittsburgh police officer after a traffic stop in June.

The overwhelming concern among those opposed was fear that armed police would inevitably target students who are black or have disabilities.

Though six of the nine board members had shared similar worries earlier this month, speakers at Monday’s hearing wanted to make sure their message of opposition was heard. Among the organizations opposing the measure to arm school police are the Education Rights Network, NAACP, the Education Law Center and the American Civil Liberties Union.

The only other speaker to fully support the proposal was school police officer Marion Parker, who spoke forcefully and emotionally about the need for officers to be armed. She recalled  times that weapons were taken from students, including an incident involving a sawed-off shotgun. 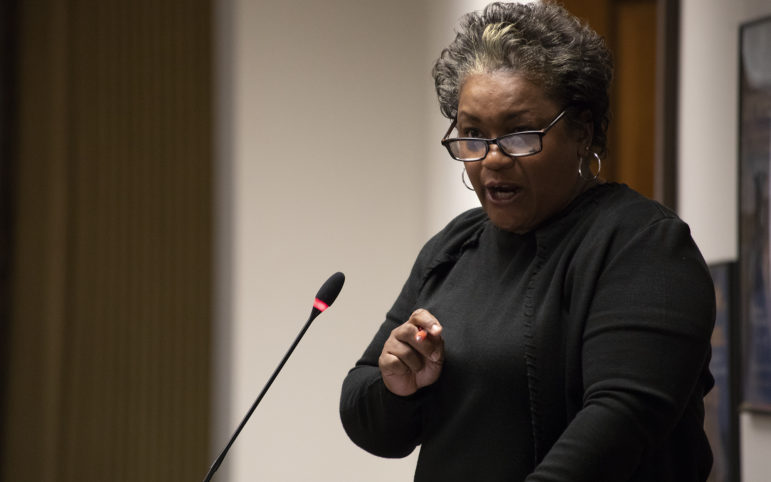 Marion Parker, a police officer at Pittsburgh Public Schools, spoke in favor of arming school officers. She said all officers at the district were properly trained to use firearms. (Photo by Kat Procyk/PublicSource)

Over and over, other speakers stated their beliefs that black students and special education students would be disproportionately harmed by officers with guns. They also suggested that arming school police would change the atmosphere in the schools and escalate tensions with minority students who already feel threatened by police.

Pittsburgh CAPA student Naijah Simon said it was unwise to arm officers in a district where half of the students are black and three-quarters are students of color.“Time and time again people of color are killed by officers who said they felt threatened,”  Simon said.

She said if the district arms officers, the message to students is: “You will kill us if we do not fall in line.” 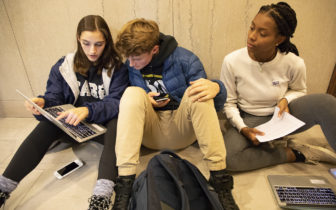 Zoe Magley, Aiden Magley and Naijah Simon, (left to right) students from Pittsburgh CAPA, work on their testimonies before taking the stand in the hallway of the Pittsburgh Public Schools headquarters. All three opposed arming officers. (Photo by Kat Procyk/PublicSource)

School police officer Eric Baldinger said he has stopped students from entering school buildings with loaded weapons and has twice been stabbed. But, he said, he was always able to handle the incidents “without causing harm to the students.”

Before the hearing, protestors organized by the Education Rights Network distributed a written list of demands that included reducing school-based arrests by 75 percent by the 2019-20 school year and to be a police-free school district by the 2021-22 school year.

Speakers expressed frustration that they had to pass through a metal detector and have their bags checked before entering the Board of Education building to attend the hearing. The security measures forced people to stand in line outside of the building. Ruth Howze, an organizer with advocacy group One Pennsylvania, said it was the first time in 20 years of attending board meetings that she had to go through security to enter the building.

Pittsburgh Federation of Teachers Vice President William Heilman suggested the board delay its vote on the issue and instead hold discussions with the union. 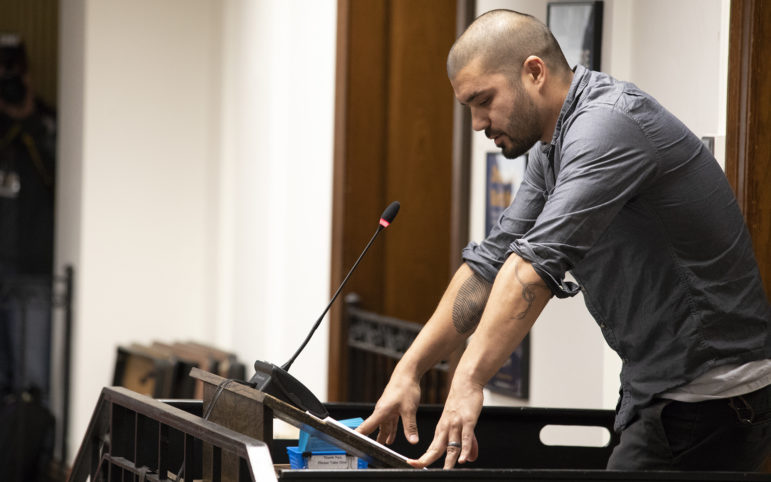 Nathaniel Ferrer, a parent, spoke against arming police officers in Pittsburgh Public Schools. Ferrer said he was angry this was being voted on by the board, citing police brutality against minority children. (Photo by Kat Procyk/PublicSource)

In an interview after his public comments, Heilman said compromises could be considered, such as having the officers place their weapons in lock boxes while they patrol school hallways.

At the Oct. 1 meeting, board members Lynda Wrenn, Moira Kaleida, Sala Udin, Kevin Carter, Veronica Edwards and board president Regina Holley indicated that they opposed arming the officers; Terry Kennedy and Sylvia Wilson did not specify their stances; and Cynthia Falls, who did not attend the previous meeting, indicated through Kaleida that she supported the proposal. As per the district’s public hearing procedure, board members did not comment at Monday’s hearing.