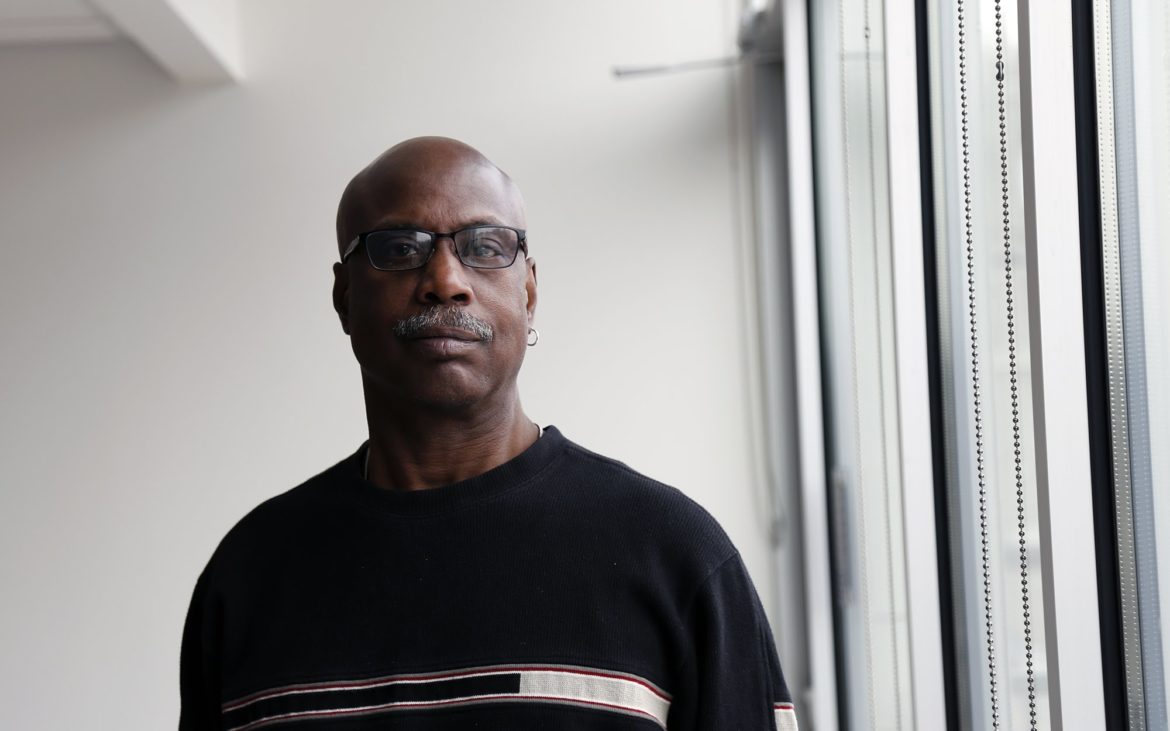 Eugene Barnette, 61, in the lobby of the Penn Mathilda apartment complex, where he rents an apartment. Penn Mathilda is a Bloomfield complex with 39 units of affordable housing. (Photo by Ryan Loew/PublicSource)

Gospel music rattles through Eugene Barnette’s apartment in Bloomfield. He has a shelf of CDs still bearing the price tags of $4 to $8 from secondhand stores. Shouts of thanks and praise echo through his residence overlooking Penn Avenue. The 61-year-old grandfather thinks he has a lot to be grateful for, even after a harrowing few years.

Barnette left his job at the Home Depot in East Liberty and went on disability assistance when he was diagnosed with cancer. He was already dealing with diabetes and depression. Rite Aid packages and paperwork from the Cancer Caring Center are strewn about his coffee table, next to a glass chessboard and religious books and pamphlets. A walking cane and cart for pushing around items sit by his door.

When he was diagnosed, Barnette was living in Penn Plaza, the East Liberty low-income apartment building whose owners evicted residents, after its affordability provisions expired, to demolish it and build something more profitable in an increasingly posh neighborhood. “I went on Craigslist and looked for anything in a 5-mile radius,” Barnette said. “Everything was unaffordable.” 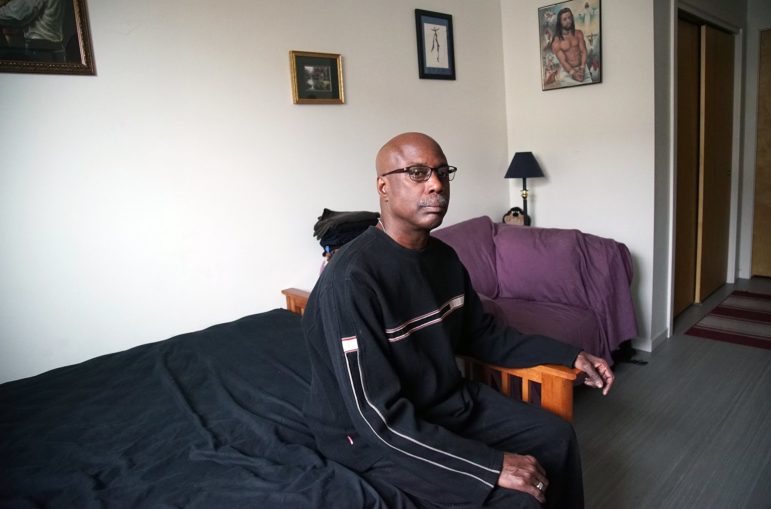 Eugene Barnette used to live in Penn Plaza Apartments in East Liberty, but was forced to leave when the owners of that complex evicted the residents. (Photo by Ryan Loew/PublicSource)

He read a news story about an affordable development under construction, one with a preference for veterans. Barnette served in the Air Force. In May 2015, he became one of the first residents of Penn Mathilda Apartments. His $605 rent is half paid through a federal housing voucher and half through his disability stipend. The building, he said, saved him from being priced out, beyond city limits, forced to rely on buses to get to medical appointments and social services offices.

“The view, the community, it all makes for a powerful blessing,” said Barnette, whose cancer is in remission. “It all said to me, ‘You’re a worthwhile person to keep alive, to keep in the neighborhood.’”

A complex set of bureaucratic mechanisms led to Barnette’s new home. It was built using Low-Income Housing Tax Credits from the federal government. The process, which has helped create 2.4 million rental units for low-income Americans in the last 30 years, will become more difficult because of the recently passed tax bill, according to experts and developers. The plan slashes corporate tax rates from 35 to 21 percent. This means that banks and corporations — which buy the credits from developers, allowing them to pay for construction costs — will have less need to save money on their tax bills. It’s predicted that this will significantly lower the price of the credits and could lead to fewer affordable housing units being built.

Penn Mathilda developer ACTION-Housing applied for its tax credits from the Pennsylvania Housing Finance Agency, which allots the state’s share of the $6 billion in Low-Income Housing Tax Credits the federal government issues annually. ACTION-Housing received $850,094 in credits and sold them to BNY Mellon for $8.8 million, which paid most of the costs to construct the building. BNY Mellon will use the credits to lower its tax bill for 10 years, as is the stipulation in all of these sales. The use of the credits legally binds the building for 30 years to house residents who earn below 60 percent of the area median income. 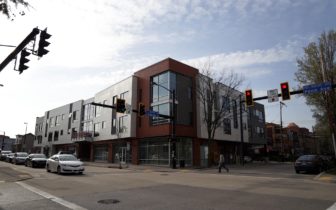 The idea, since the program was implemented in 1987, has been that the federal government forgoes some tax money to instigate the building of housing for low-income renters. Buildings can have preference for certain groups, such as artists, the elderly, people with disabilities or veterans.

State agencies pick developers to get credits and developers sell them to banks and corporations. There is no set price; it depends on how valuable the buyer considers the credit.

Some economists are already making precise predictions on the tax law's effect on this Rube Goldberg Machine-like financing system. Elliot Eisenberg, a former senior economist with the National Association of Home Builders, predicts prices will fall from $1 per tax credit to about 86 cents. “The price [of credits] is very much determined by the taxes you save,” Eisenberg said. “If your income tax falls, you’re not as worried about your tax bill for the next 10 years.”

Novogradac and Company, a San Francisco-based accounting firm which publishes a monthly report on the tax credit market, said credits had been selling for $1 per $1 credit, fetching up to $1.20 in hot real estate markets. They have already withered in price against the certainty of tax cuts under President Donald Trump and a Republican House and Senate. Novogradac also predicts credits will now sell for about 86 cents for $1 in credits under the new tax plan.

Over 10 years, Novogradac predicts the tax law will decrease the number of new low-income rental units by 232,300; specifically, it estimates 4,790 fewer in Pennsylvania. Eisenberg believes the country will see 14,000 fewer affordable units built each year, as some developers can’t make up the gap in funding.

Affordable housing developers in Pittsburgh say they have already noticed a pinch. 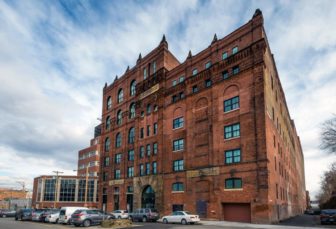 The Brew House on the South Side of Pittsburgh is one example of a mixed-income development financed by a private developer. (Photo courtesy of the TREK Development Group)

John M. Ginocchi, vice president of TREK Development, whose credit-subsidized projects include the South Side artist residence the Brew House and developments in Braddock and the Hill District, said his firm had been selling tax credits for $1.20 for each $1 credit. “Right now, it’s in the low 90s and I’m predicting it will go lower,” Ginocchi said.

Lena Andrews, senior development officer of ACTION-Housing, said, “We have noticed a difference. We haven’t had to give up on a project yet because of it, but there is a lack of clarity in the market.” Andrews said ACTION-Housing had sold some credits for as much as $1.10, but expects prices to drop to between 80 and 90 cents.

Elliot Frank, president of the Autism Housing Development Corporation of Pittsburgh, which specializes in subsidized housing for people on the autism spectrum, is feeling pessimistic. “What do [banks and corporations] need them for anymore?” Frank said. “Some of the buyers will just drop out.”

Roy S. Diamond, a Philadelphia-based real estate consultant who has helped developers across Pennsylvania fund their affordable housing developments, said he thinks they can adapt to the new market. “I think pricing [of credits] will have an impact but I am not sure how much,” he said.

Buying tax credits is a way for banks to demonstrate they meet the standards of the Community Reinvestment Act [CRA], Diamond pointed out. The 1977 law, meant as a measure against the decades-long practice of redlining minority communities, requires banks to invest in areas where they are headquartered. Its language is vague; the law only states that banks “demonstrate that their deposit facilities serve the convenience and needs of the communities in which they are chartered.” This, Diamond said, gives federal regulators a range of reasons for approving or declining a bank’s request based on their commitment to the CRA. “It’s looked at when banks want to open branches or close branches and when they want to acquire other banks,” he said, so banks are keen to demonstrate their CRA commitment and buying low-income tax credits for projects near their headquarters is a common way to do that.

He also notes that the tax credit market has been through severe changes before. “In 2008, bank interest in low-income house credits disappeared,” Diamond said. Amid the financial meltdown, many banks had no profit the government could tax, so tax credits were worthless to them. Non-bank investors started buying credits in the high 70-cent to low 80-cent range. “They exceeded the expected return on investment,” he said, “and when the economy recovered, bank’s interest returned.” 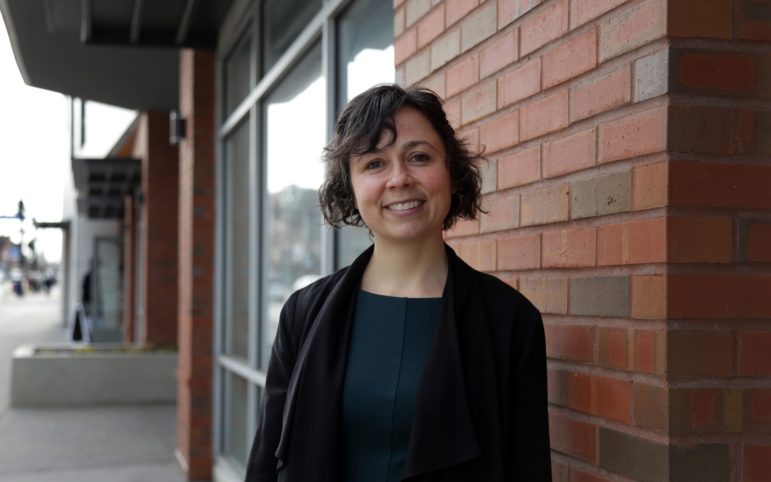 Lena Andrews is an affordable housing developer with ACTION-Housing. (Photo by Ryan Loew/PublicSource)

If the buyers of Low-Income Housing Tax Credits pay less for them, that will leave developers with greater funding gaps for their projects. It’s not uncommon for developers who primarily fund projects by sale of tax credits to fill in funding gaps from other sources. Developers turn to historic preservation credits, philanthropy money, traditional bank loans and funds set aside by states and municipalities, like Pittsburgh’s Housing Opportunity Fund. Last month, city council voted to tax property transfers and pull money from closed-out trust funds and department surpluses to fill such gaps for low-income housing projects and to provide financial assistance to first-time homebuyers.

Andrews said such funding is more important after the drop in the going price of tax credits. “It’s always a matter of pulling together [funding] sources,” she said. “I think the burden will shift to states and cities.”

ACTION-Housing faced a $2.7 million gap for Penn Mathilda after it had sold its credits for $8.8 million, about $1.04 per credit per year used. It used loans and grants from the city and foundations to fill that gap. However, if those credits had only sold for 86 cents per dollar, a common current estimate, that would have increased their gap by about $1.5 million. Andrews said she is uncertain if ACTION-Housing would have been able to find that money elsewhere.

“The view, the community, it all makes for a powerful blessing. It all said to me, ‘You’re a worthwhile person to keep alive, to keep in the neighborhood.’” 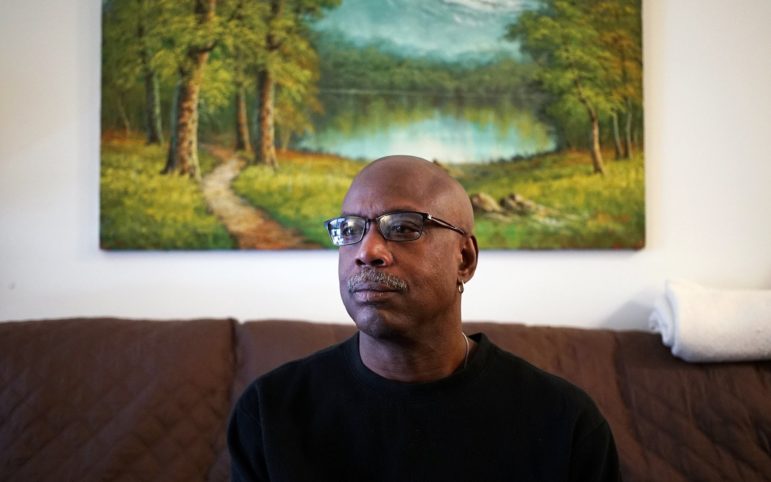 Eugene Barnette's $605 rent for his Penn Mathilda apartment is half paid through a federal housing voucher and half through his disability stipend. (Photo by Ryan Loew/PublicSource)

Barnette said the Penn Mathilda development was his only hope to stay close to the doctors and programs, like art therapy, he used. “Nothing else in the neighborhood was affordable,” he said.

Now, he’s trying to stay busy, keep his mind off his ailments and make the place feel homey. He plans to install an aquarium he was given. He’s already decorated the apartment with framed photos of East Liberty. On one wall, next to his collection of gospel music and ’70s R&B, hangs a picture of a forest with a Bible verse about receiving blessings through hard times — Isaiah 55:12: “For you shall go out with joy, and be led out with peace. The mountains and the hills shall break forth into singing before you.”