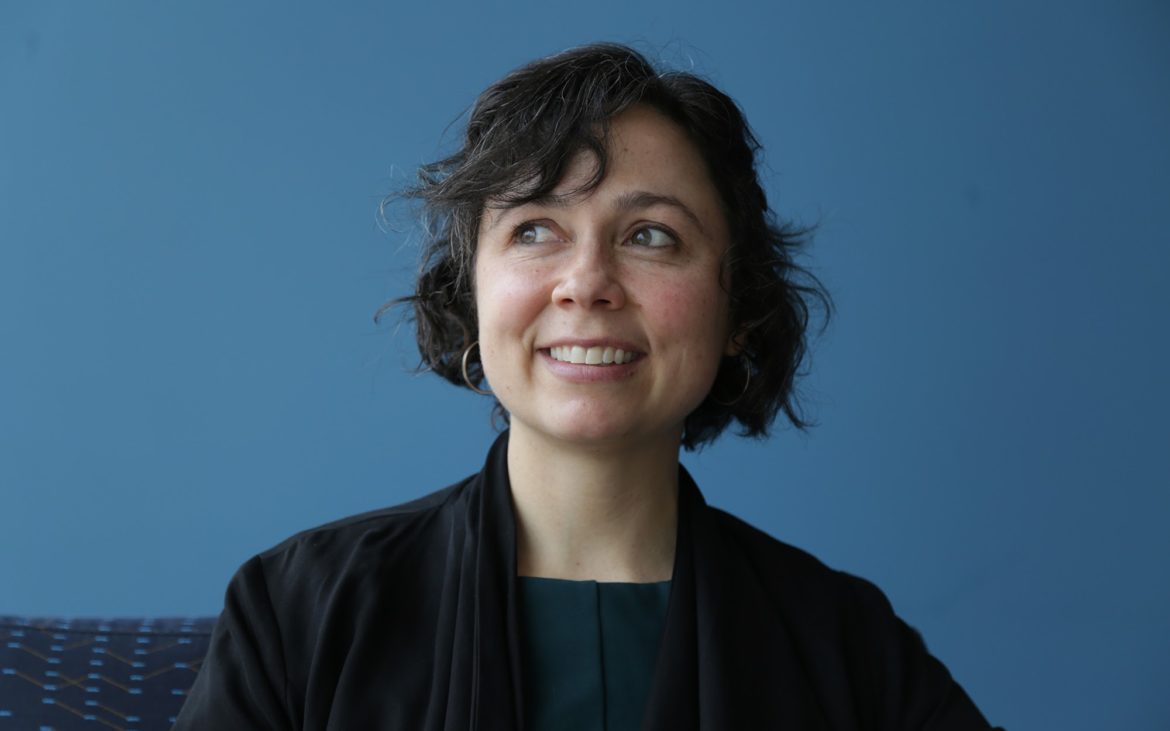 Lena Andrews is an affordable housing developer with ACTION-Housing. (Photo by Ryan Loew/PublicSource)

A vacant dilapidated garage stood at the entrance to the Penn Avenue Arts District in Bloomfield. Over the years, this building had served a number of purposes; it was a garage, a metal-working studio, and most recently, storage for artists. It had been vacant for years, stuck in the limbo of foreclosure and tax delinquency. As the neighborhood changed rapidly, ACTION-Housing found a way to transform the building.

For ACTION-Housing, the first step in creating new housing that is affordable to low-income households is finding a site that meets our core requirements. It has to be big enough to create at least 30 units of housing and accessible to public transportation, bike lanes and quality sidewalks. Ideally, it’s easy to get to a grocery store, schools, a pharmacy, parks and job centers. Because our tenants have limited financial resources, we try to locate new housing in places where it’s easy to live without a car. When we found the garage at the corner of Penn and Mathilda, we knew this was the perfect site for a project using the Low-Income Housing Tax Credit program. It took two years to buy the building out of foreclosure for $165,000 and then another two years before the start of construction. This “predevelopment” phase allowed us to work closely with the community and other partners to come up with a basic plan, which we then used to raise money from foundations and build support. A critical part of this discussion was identification of a target population for the supportive services we bring to all of our buildings. Other recent projects have been designed for people on the autism spectrum, youth aged out of foster care and those with intellectual or physical disabilities. In the case of Penn Mathilda, we proposed a preference for veterans. This was wholeheartedly embraced by the neighborhood where many veterans have already been living.

We often build on sites that have been blighted or abandoned, so neighbors are excited to have those sites transformed. Sometimes, the community is thrilled to have our project in their neighborhood. Other times, we can face resistance because of perceptions about affordable housing that we have to fight, such as that the building will be unattractive or poorly managed or that our tenants will cause problems for the neighborhood. Some neighborhoods are resistant to change in general; in Bloomfield, we faced concerns about commercial space in our building because neighbors were nervous about increasing parking demand – one of Pittsburgh’s favorite topics. During the predevelopment phase, we worked with our design and construction team to arrive at a schematic plan and secure all necessary city zoning approvals, necessary for our application for Low Income-Housing Tax Credits [LIHTC]. Created in 1986, the LIHTC program is administered by the Internal Revenue Service and is the primary funding source for the Penn Mathilda Apartments and for 90 percent of the newly constructed affordable housing in the United States. Applying for tax credits is extremely competitive; each state is allocated a bit over $2 per person in tax credits. In 2016, Pennsylvania received about $29 million in credits. These tax credits are divided across the state; in Pittsburgh, about four or five projects are funded each year with an average of 40 units each. This program creates only about 200 units per year in a city that has a deficit of 17,000 affordable units, according to a 2016 city report.

We applied to the Pennsylvania Housing Finance Agency [PHFA] for the credits in the summer of 2013. The application alone filled a 4-inch binder with 45 sections. Only about 35 percent of the applications received by PHFA are funded, so there’s a considerable risk in spending money on an application that has a one-in-three chance of receiving credits. A group of children participate in a game design camp at Assemble, which has been located at the Penn Mathilda Apartments building since September 2016. The building has 39 units of affordable housing and 6,000 square feet of office space for arts organizations. (Photo by Ryan Loew/PublicSource)

Happily, in March of 2014, we got the news that Penn Mathilda was one of the projects selected and we would receive $850,094 in tax credits in exchange for a 30-year commitment to creating affordable units. Some are set for households making 60 percent of the area median income, others for 50 and 20. (Currently, 50 percent of the area median income for a household of two is $28,500 a year.)

Working through a syndicator (the National Equity Fund), we sold our tax credits to BNY Mellon in exchange for $8.8 million in equity. BNY Mellon receives a number of benefits that make this investment worthwhile. The bank gets an $850,094 federal tax credit every year for 10 years. It can deduct depreciation on the building from its federal taxes. It receives fees and interest on our construction loan. Lastly, it receives credit toward Community Reinvestment Act obligations, a program encouraging investment in low-income communities. Bikes hang on a custom-designed rack in the lobby area of Penn Mathilda Apartments. (Photo by Ryan Loew/PublicSource)

Even with this equity, we still had a $2.7 million gap that was covered by grants and loans from the city’s Urban Redevelopment Authority, Bridgeway Capital, the Heinz Endowments and the Richard King Mellon Foundation.

Once funded, we spent the next nine months designing the building in detail. This process included environmental testing, creating legal agreements, getting a building permit, negotiating construction pricing, and finally closing on financing and starting construction in December 2014.

That’s when this whole process starts to get real. Seeing the building you’ve been envisioning for years finally materialize is rewarding. But it’s also fraught with challenges. We had to make sure the building was aligned with Penn Avenue’s new sidewalk (something you’ve likely never thought about). Neighbors were upset over loud beeping and banging at 6 a.m., a product of our accelerated building schedule. Tax credit construction is not flexible; we commit to our investor that our units will be occupied at a certain date. If they’re not, we immediately start losing money. Lena Andrews says ACTION-Housing’s first steps in creating new affordable housing includes evaluating if a building can accommodate 30 units of housing and is near public transportation, grocery stores, schools and other amenities. (Photo by Ryan Loew/PublicSource)

The best part is when residents finally get to move in. It’s the highlight of the process, as the whole purpose and reason for affordable housing is to create safe, beautiful, stable homes for people who need them. While it’s a challenge and a long process to get these buildings done, these projects are the best way to keep long-term affordability in our neighborhoods, particularly now that Pittsburgh’s market is escalating. In the words of one of our residents: “I know money is a fact of life, but never lose compassion for the next person.”

Lena Andrews is an affordable housing developer with ACTION-Housing. She can be reached at landrews@actionhousing.org.

One thought on “What does it take to develop a housing project with affordable units in Pittsburgh?”