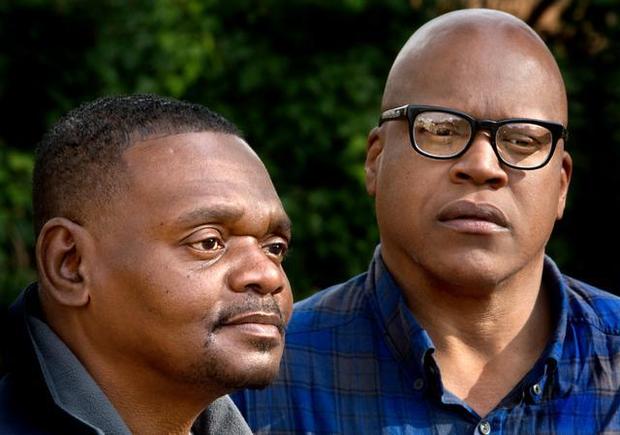 Henry McCollum and his half brother, Leon Brown

How would it feel to be locked up for three decades — away from family, normal employment, automobiles, technology — and then suddenly have freedom?

For two half brothers exonerated last year of the gang rape and murder of an 11-year-old girl, it’s a struggle.

But 31 years have passed. McCollum, now 50, spent those decades on death row, biding his time while 42 other inmates were executed, according to the News & Observer in Raleigh. He was the longest-serving inmate on the state’s death row.

Now he struggles to shake the shackles of prison.

At mealtime, he found himself asking for his tray, just like in Central Prison. He’s uncomfortable in crowds, a residue from prison, where inmates develop sensitive antennae about their surroundings, who is friend and who is foe.

He misses his friends on death row, men with whom he shared everything for decades.

“I left a lot of love back there,” McCollum said.

McCollum can’t drive, the story said. His family has no money, and he’s waiting on the governor to grant him a pardon to officially clear his name. Then he’d be due up to $750,000 from the state for his wrongful conviction.

Since McCollum and Brown were cleared by a judge, they are not yet eligible.

Prison officials gave each of them $45 cash at release.

Brown, 47, was serving a life sentence and spent most of his time in the general prison population. That means he was away from the sort of friendships McCollum was able to develop among inmates sentenced to die, the story said.

McCollum and Brown’s case is exceptional because they were found to be innocent of such serious charges after so many years.However, nationwide, efforts are underway to reform the prison system, which in some cases could lead to earlier release for inmates sentenced harshly for crimes that might not draw such long sentences today.

The question then is what happens to these inmates as they transition back to their communities and try to move on from prison, which is often the only environment an offender has known as an adult.

As a consequence, they might have never used a computer —  certainly not with the capabilities of modern machines — and they’ve also likely missed chances for education and have huge gaps in their job experience.

McCollum said he is hoping for a job as a janitor. He did that work in prison. IQ tests for both men showed scores in the 50s and 60s.

At night, McCollum said he often dreams that he is in prison. He wakes up sweating and breathing hard. When he feels a soft pillow and a real blanket, he realizes he’s not on a steel bed bolted into a concrete wall. He can walk to the bathroom or go outside. He doesn’t have to wait for a heavy steel door to slide open at 7 a.m. At these moments, he said, he thanks God for his freedom.

Now they’re waiting to see if they’ll be eligible for Medicaid — they applied in the fall — and if Republican Gov. Pat McCrory will act on the pardon application filed in September.

In the meantime, they’re living on the generosity of others while trying to restart the lives the state took from them three decades ago.

“I just want to enjoy my years on Earth,” McCollum told the News & Observer. “I’m not young anymore.”