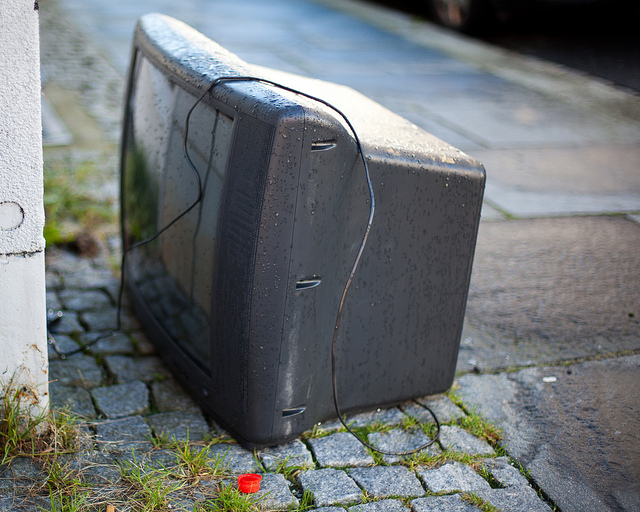 About 77 million televisions sit in American basements or storage, unable to be thrown away or to be properly recycled because state laws prohibit it. It’s become especially difficult to donate and recycle unused TVs under Pennsylvania law.

According to the state Department of Environmental Protection [DEP], the 2010 Covered Device Recycling Act [CDRA] “requires manufacturers to provide recycling programs for desktop computers, laptop computers, computer monitors, computer peripherals and televisions sold to consumers in Pennsylvania,” but there are limitations to this supposedly free service.

Pennsylvania is one of 25 states that bans dumping electronics in landfills, but it’s also one of only five states that require manufacturers to front the costs for recycling, as a recent Pittsburgh Post-Gazette story indicates.

According to the Post-Gazette, about 25 percent of Pennsylvanians have access to free TV recycling required by law because the costs continue rising and the manufacturers aren’t keeping up.

According to the EPA, companies like Best Buy, Samsung, Staples and Sony are supposed to accept drop-off recycling, many such organizations no longer accept old TVs in the state.

From the PG story:

That financial crunch has caused a number of retailers, non-profits and local governments — among them Best Buy, Construction Junction, Goodwill and five counties around Philadelphia — to stop offering free electronics recycling. Only 35 of Allegheny County’s 130 municipalities offer electronics recycling through their waste haulers.

CRT TVs accounted for almost three-quarters of the electronic wasted collected by the Pennsylvania Resources Council [PRC] last year; the total waste was double what they collected in 2013, according to the PG. The PRC is a nonprofit that collects hard-to-recycle items.

PRC has accepted CRT TVs at its events in the past, but it can no longer afford to unless the DEP allows it to charge a fee for collection. For the last eight years, PRC worked with eLoop, a Plum-based electronics recycler, to recycle the TVs.

According to the PG:

[eLoop CEO Ned] Eldridge said eLoop accepted about 8.5 million pounds of old television sets each year for the last four years, but this year he’ll only get manufacturers’ financial support for about 5 million pounds. Given the backlog of old televisions, he said, there’s potential that many will be abandoned along roads and in illegal dumps.

A spokesman from the DEP told the PG that they are aware of the problem, but can’t authorize charging the fee because it goes against the CDRA.