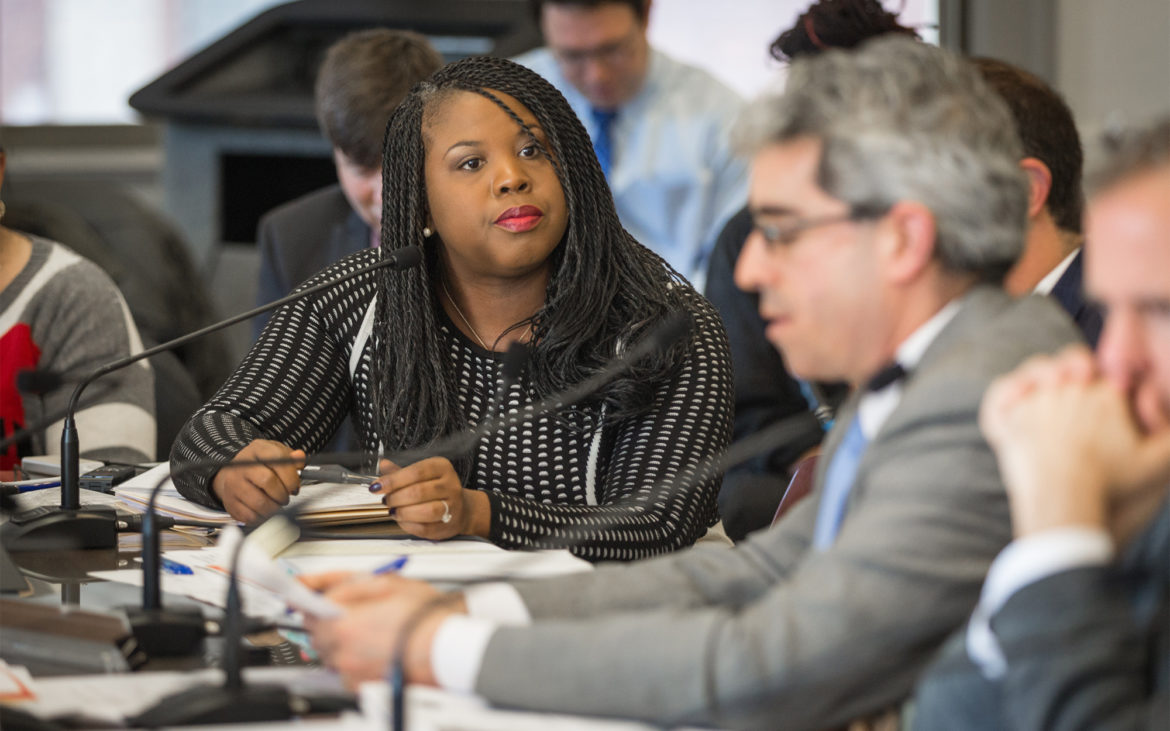 Marimba Milliones, president of the Hill Community Development Corporation, at the Nov. 30 hearing of the Zoning Board of Adjustment. The board heard from Hill District residents and advocates that day about Gaudenzia's proposed residential rehabilitation facility. (Photo by Maranie Rae Staab/PublicSource)

Some community advocates see their plans for a cultural corridor in the Hill District of Pittsburgh slipping away.

Allegheny County officials celebrated the opening of a new STD clinic at the Hill House Blakey Program Center on Wylie Avenue on Feb. 14.

And five days later, the city’s Zoning Board of Adjustment issued a decision that allows the nonprofit corporation Gaudenzia to build a three-story drug and alcohol rehabilitation facility a few blocks away.

It would join three other treatment centers already established along and near the Centre Avenue stretch envisioned to one day hold retail, restaurants and nightlife.

The Hill Community Development Corporation [CDC] has been leading the fight against granting Gaudenzia another prime location — both to preserve the potential for an African-American cultural epicenter and to protest that Gaudenzia primarily treats outsiders and not Hill residents, according to Hill CDC President Marimba Milliones.

Despite the CDC’s involvement at public meetings, and years spent on a master neighborhood plan, the Hill CDC and involved residents say they were blindsided by the recent developments.

At the request of the Hill CDC, Mayor Bill Peduto has agreed to convene a meeting with the group and Gaudenzia to see if they can reach an amicable solution. The Hill CDC is hoping to find a new location for the facility. Gaudenzia did not respond to a request for comment as of publication time.

The Hill CDC can also appeal the zoning board decision within 30 days.

Zoning board chair Alice B. Mitinger declined to comment on the ruling. The board’s decision concluded that the “objectors” did not prove the treatment center would have “detrimental impacts.”

The board also acknowledges in its decision that the city has “endorsed” the Hill CDC’s master plan for development, but says the city has not formally “adopted” it. 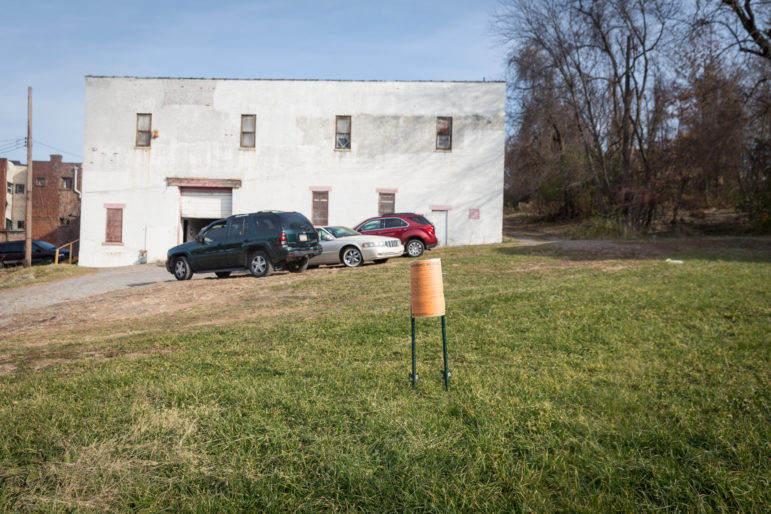 The site on Grove Street where Gaudenzia has received approval to build a three-story rehabilitation facility. The Hill Community Development Corporation says the site encroaches upon plans for a cultural corridor near Centre Avenue in the Hill District. (Photo by Maranie Rae Staab/PublicSource)

In the Hill CDC’s communications with residents, they have also expressed disappointment with the Allegheny County Health Department for relocating their clinic “without consulting the community.”

Karen Hacker, director of the Allegheny County Health Department, said in a March 6 statement to PublicSource that they worked “extensively” with the Hill House Association to establish the new clinic. She wrote that the department chose the Hill District location based on where its current and potential patients are and accessibility to the location. She noted that the health department “did not consult with, or speak to, the Hill CDC, nor did we hear from the organization at any point during this process, which was open and well-publicized.”

Carl Redwood, board chair of the Hill District Consensus Group, told PublicSource that he supports Gaudenzia’s proposed project and doesn’t object to the STD clinic either.

“STDs will not come get you,” he said. “There’s an effort underway to stigmatize residential drug treatment facilities and also health department facilities as something negative for the community.”

The countywide STD and HIV/AIDS clinic used to be in Oakland at 3441 Forbes Ave.

“The clinic in Oakland had been located in a building that was well past its useful life and was no longer worthy of our employees or its clients,” County Executive Rich Fitzgerald said in a Feb. 14 news release.

The county plans to sell the property to the University of Pittsburgh and has entered a $120,000 annual lease with the Hill House for the new clinic location, according to health department spokesman Ryan Scarpino.

A 2016 report provided by the health department shows chlamydia and gonorrhea  occurrences among men in Allegheny County have increased, though syphilis has generally decreased. The report did not break down reported cases by neighborhoods or zip codes.

“Our focus was and is on how to best serve the needs of the patients and the clinic serving them. Working with the Hill House Association, we believe that we accomplished that ..."

“As soon as we had confirmation of the move, it was announced at County Council meetings and in a subsequent press release,” Hacker wrote. Scarpino confirmed that a Feb. 8 press release was the first notification to the public about the clinic.

Milliones said, “I don’t know anyone who received notification or who was engaged around the placement of a new clinic.”

“Our focus was and is on how to best serve the needs of the patients and the clinic serving them,” Hacker wrote. “Working with the Hill House Association, we believe that we accomplished that and look forward to continuing to be a partner with the community, including the Hill CDC, moving forward.”

Milliones said the clinic opening and Gaudenzia approval create a problem for the community: “There comes a time where there is saturation, market saturation.”

Gaudenzia currently has five addresses in the Hill’s proposed cultural hub, at least two of which are vacant lots. The recent decision grants a special variance exception for  Gaudenzia to operate a rehab facility that can house 15 residents at 420 Grove St.

At a March 1 ‘meet and greet’ hosted by the URA, some Hill residents used the public comment section to speak up about the Gaudenzia ruling. 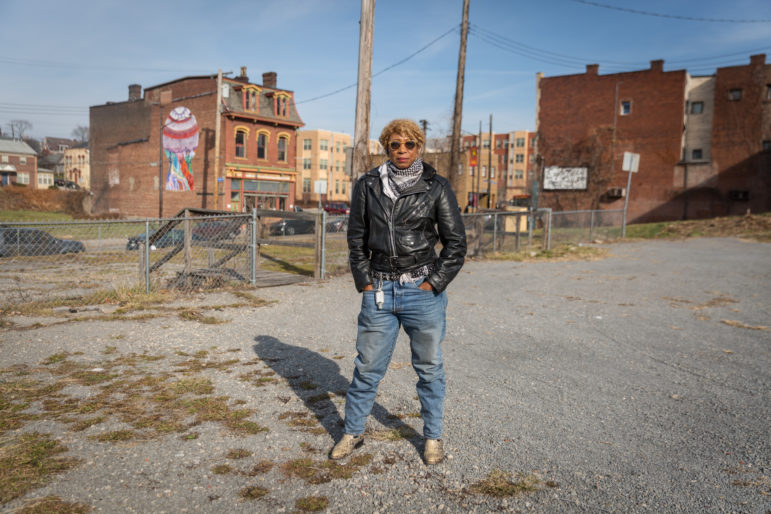 Brenda Tate, a retired police officer who lives in the Hill District, asked about the URA’s involvement in the Gaudenzia and clinic developments. URA officials at the meeting and through an email to PublicSource said the authority is not involved in the projects.

At the meeting, Milliones addressed URA Executive Director Robert Rubenstein about its involvement with Gaudenzia on this project and other plans the corporation has proposed to build affordable housing and possibly a daycare and recreation center.

Rubenstein eventually threw up his arms and responded that Gaudenzia has “been here for decades.” Many in the audience groaned. One audience member replied, “That’s disrespectful.”

Civil rights activist established the House of Crossroads rehab center in the Hill District about 50 years ago. It wasn't until 2012 that Gaudenzia purchased the facility and took over management there.

Milliones and several community members requested more communication and clarity from the URA and asked several times who their contact person should be. Councilman R. Daniel Lavelle offered to be the community liaison.

The Hill CDC considered Gaudenzia’s proposal even before the city did, and the project failed its review process.

In a letter to Gaudenzia citing why they failed, the Hill CDC stated there are better uses of the land in line with the community’s master plan. The CDC states that it offered Gaudenzia five other locations that would be a better fit because the land is not in the envisioned cultural hub.

The neighborhood plan featuring this cultural center was a 2016 American Institute of Architects Pittsburgh Award Winner.

“It’s based on a real-life market study,” Milliones said. “We didn’t put that amount of work and effort and sweat into the project, into that planning effort, for it to be set aside. We want to implement it. We need the city’s help doing that.”

The Hill CDC wrote in emails to residents and in a March 1 Facebook post that they have “60 letters of opposition [to Gaudenzia] from residents, business owners, and developers in the Hill District, 114 petition signatures to relocate and opposition from Councilman Lavelle and Representative [Jake] Wheatley.”

When Gaudenzia took its proposal to the city zoning board despite the Hill CDC’s disapproval, Hill CDC staff and some residents spoke at a Nov. 30 hearing about their opposition. 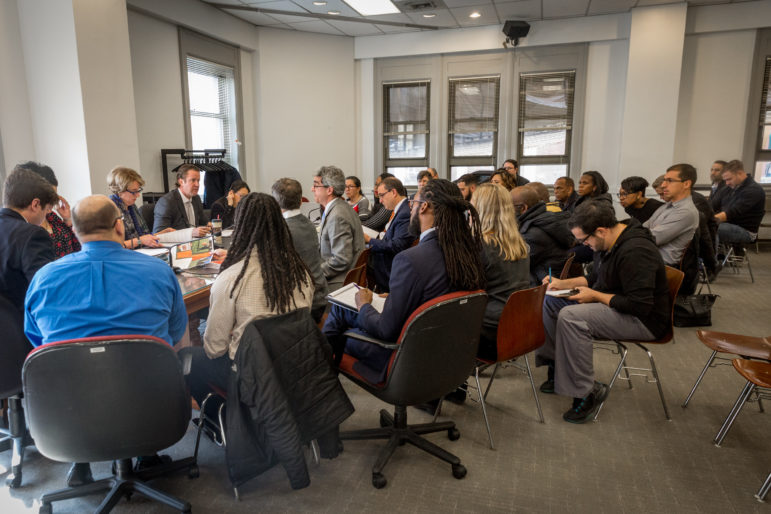 The Nov. 30 hearing of the Pittsburgh Zoning Board of Adjustment, which recently approved a special variance exception for Gaudenzia to operate a rehab facility that can house 15 residents at 420 Grove St. (Photo by Maranie Rae Staab/PublicSource)

Milliones talked about Gaudenzia clientele being shipped in from the suburbs and said people from the Hill District aren’t being treated there.

Gaudenzia representatives have said it operates as a self-referral program, meaning clients have to sign up or “want” treatment.

Redwood said the Hill District Consensus Group has since talked to Gaudenzia about community outreach and that they talked about “full scholarships to verified Hill District residents that request treatment.”

After the hearing, the parties were requested to turn in “findings of fact and conclusions of law for the Board's consideration.” These findings were requested by the first week of January. The Hill CDC turned its findings in 11 days late, which the board notes more than once in its decision. When discussing the Hill CDC evidence, the board characterizes it as “untimely.”

According to the zoning board decision, an objector — in this case, the Hill CDC — would need to show the facility would detrimentally impact the community.

Gaudenzia’s conclusions of law included reference to the Fair Housing Amendments Act (FHA), which forbids discrimination against individuals with a disability and applies to people seeking drug and alcohol treatment.

Gaudenzia also included language from passed proposals or appeals to the city that argued one “cannot simply speculate but must raise specific issues” about how a project would substantially affect the public.

The board concluded that Gaudenzia provided “sufficient, substantial and credible evidence to demonstrate compliance” with codes regarding community homes.

This story was fact-checked by Jordana Rosenfeld.