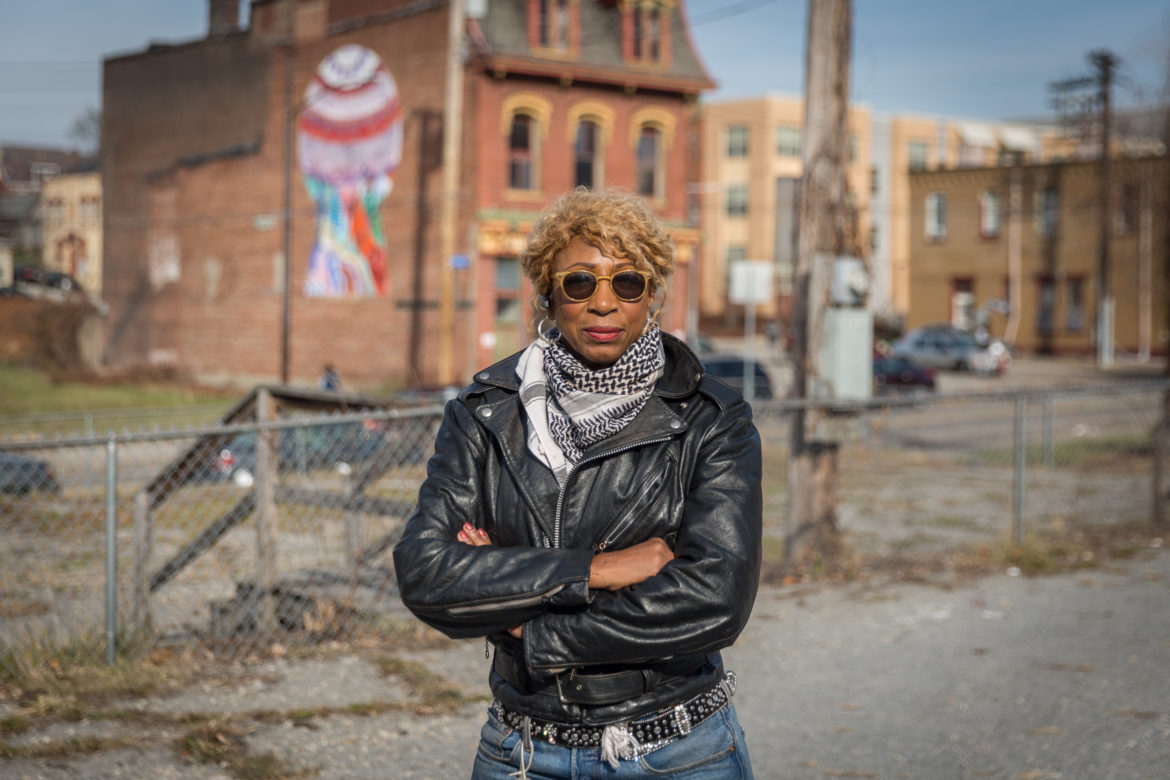 Brenda Tate’s Volkswagen slows down to a stop, and the men huddled on the street corner start to disperse. They know her car, gleaming red on a muted December afternoon in the Hill District.

Before she retired, Tate stood in her police uniform on this very corner and used to watch drug dealers. They were brazen, selling heroin in broad daylight and paid her no mind. They didn't care that she was an officer. At one point, while walking her beat, Tate watched them for two weeks. “I figured out that there was a drug drop at 11 and a drug drop at 2,” she said. Tate started reporting the pattern and got the dealers arrested.

And even though now she’s 68 years old and has retired from the force, she still drives by to remind them she hasn’t left the Hill. Tate turns to me and points to the men on the corner who are giving her the eye.

“This corner I’m taking you to now, this is the heart of the drugs. They know me. They hate me still. They’re waiting for their dope right now... The dope man’s comin’.”

As we drive by, the men start shouting to each other, “Hey! Hey!” and “Ho! Ho!” They desert the corner in a matter of seconds. She decides to loop the block. 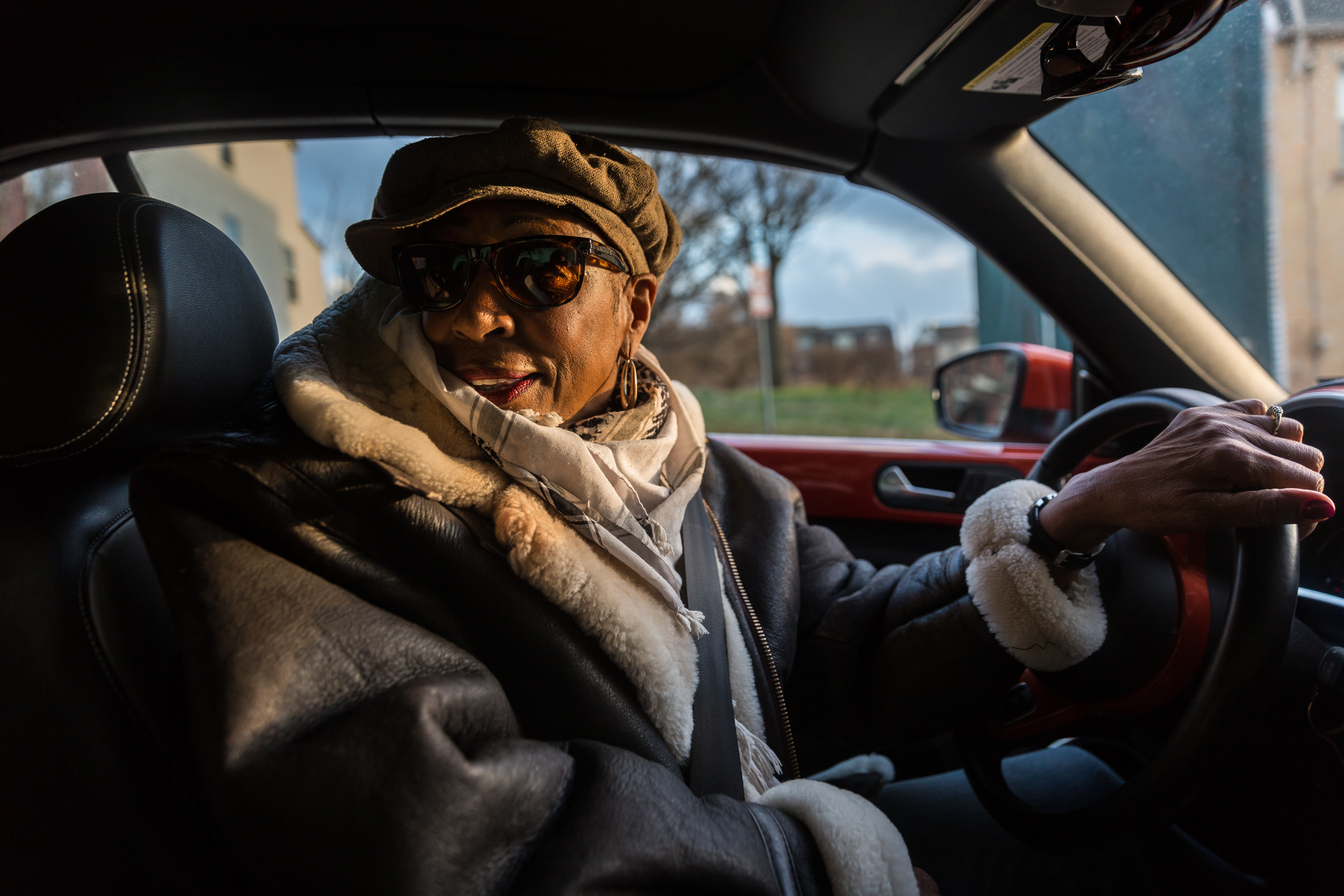 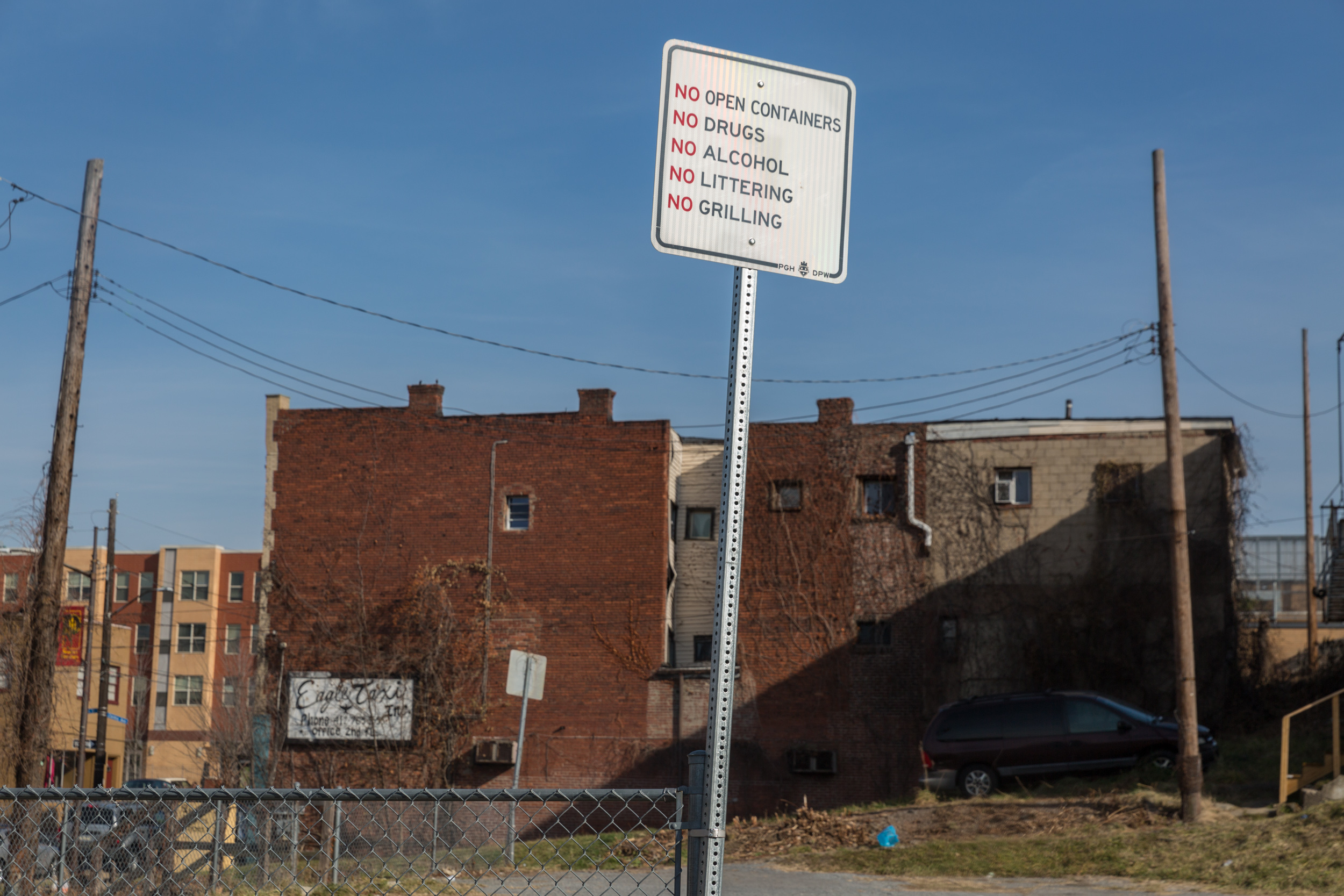 Tate says she was instrumental in getting this sign erected in an area of high drug activity in the Hill District. (Photo by Maranie Rae Staab/PublicSource)

Before Tate retired in 2014 from a 40-year career as a police officer, she asked to spend the last two years of her service for the Pittsburgh Police Bureau protecting her neighbors in the Hill. She walked a beat along Centre Avenue pushing drug dealers out. Clean for 31 years, she knows the power of addiction.

When Gaudenzia took over, it changed.

Marimba Milliones, president of the Hill Community Development Corp [CDC], said Gaudenzia clientele are being shipped in from suburbs and that folks from the Hill District aren’t getting treated there. In a Nov. 30 zoning board hearing, Gaudenzia said it operates as a self-referral program, meaning clients have to sign up or “want” treatment. Gaudenzia representatives declined to comment for this story. 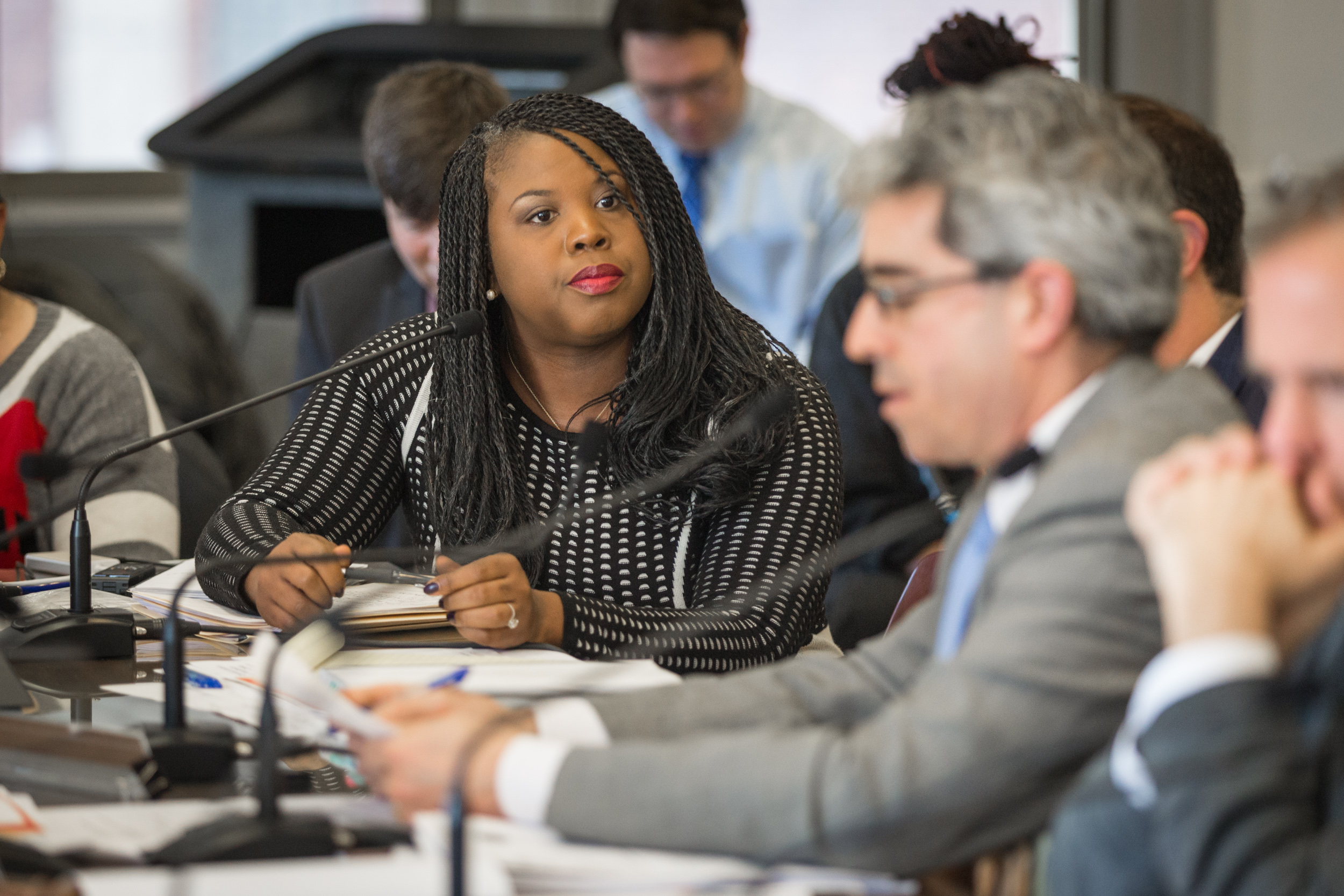 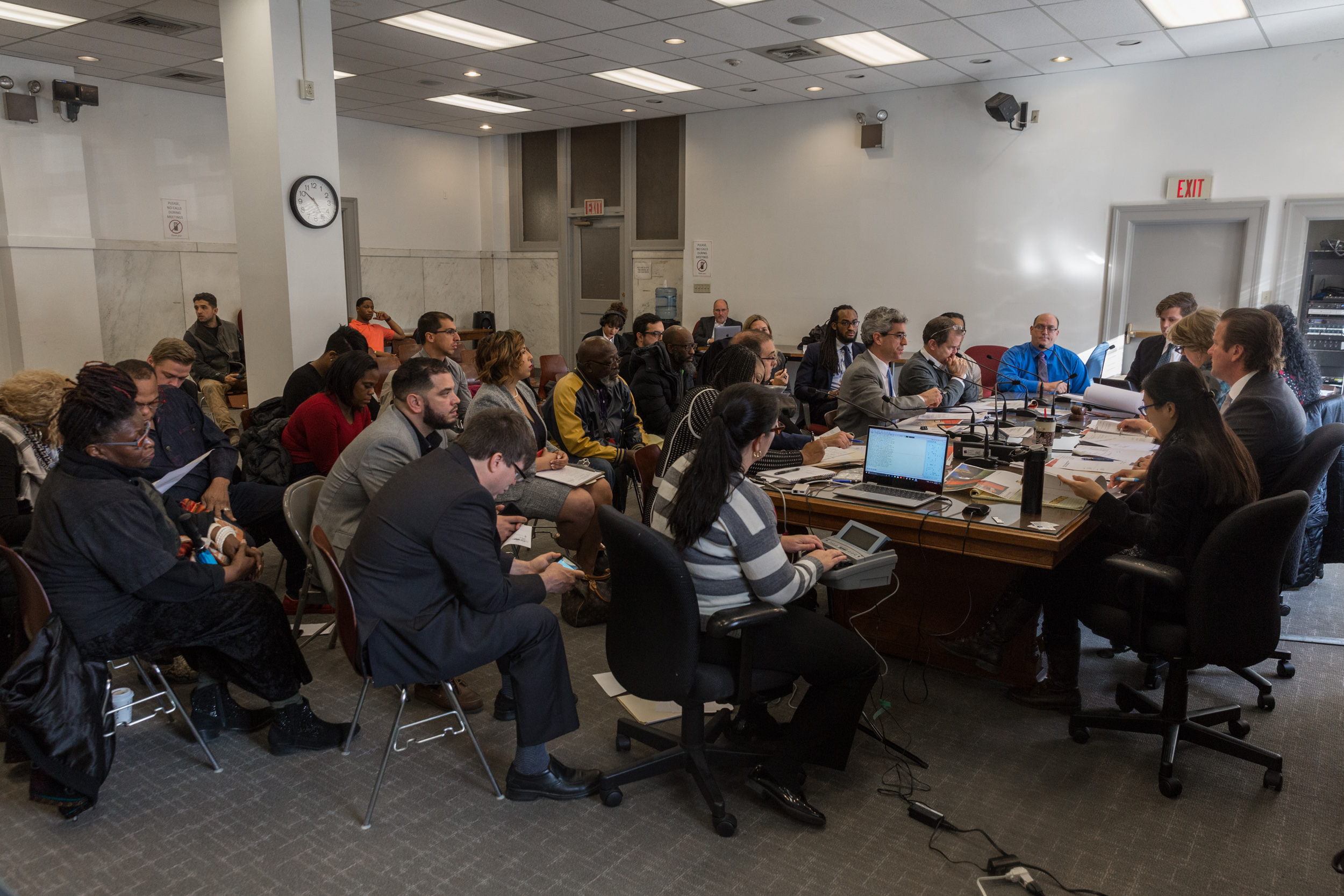 The crowd at the Nov. 30 zoning board hearing. (Photo by Maranie Rae Staab/PublicSource) 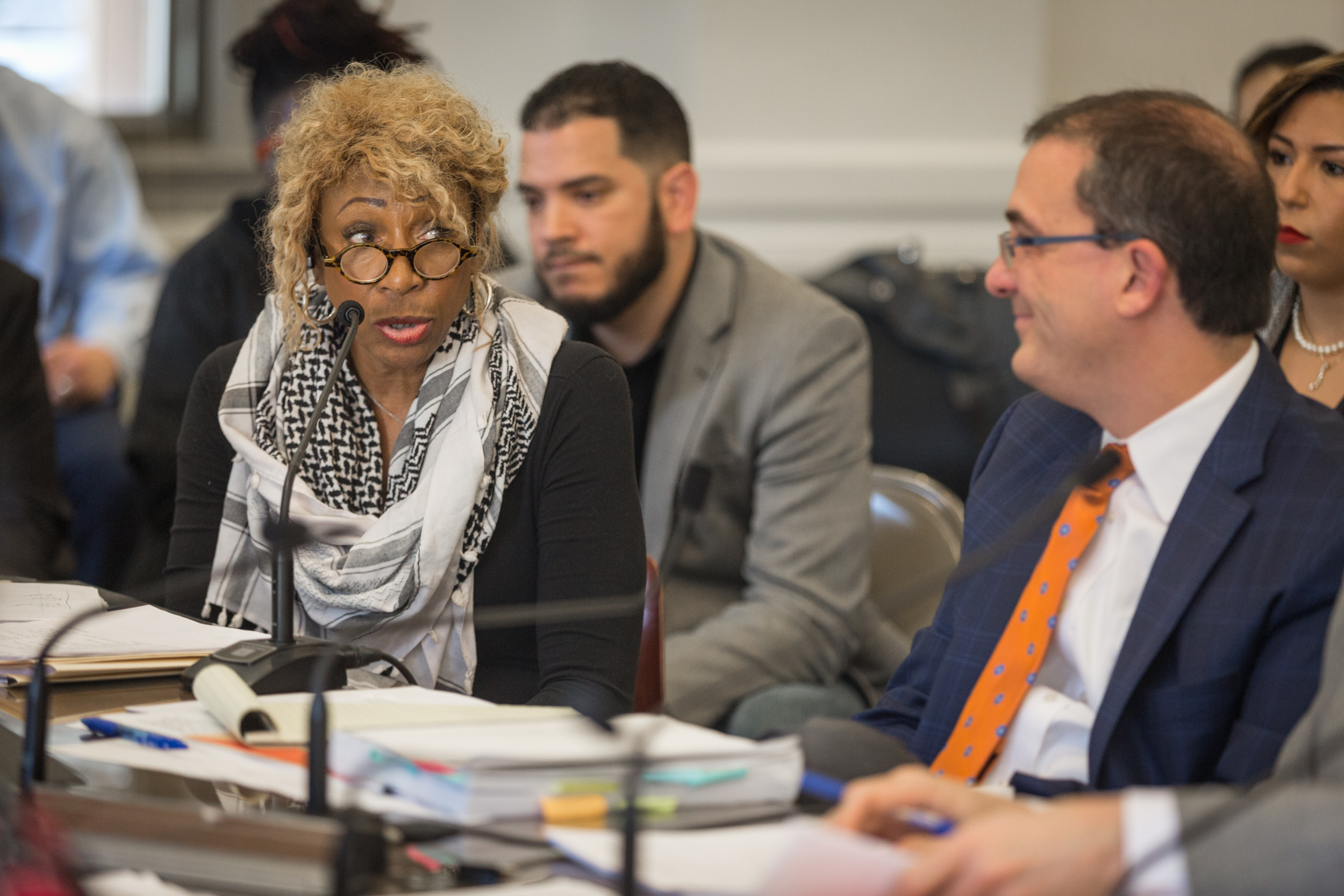 Retired police officer and Hill District resident Brenda Tate talks to the board about her opinion of Gaudenzia and its proposal. (Photo by Maranie Rae Staab/PublicSource)

Gaudenzia, founded in Philadelphia in 1968, operates 161 programs and 90 facilities in Pennsylvania, Delaware and Maryland. And now, it wants to expand its presence in the Hill District.

This year, it submitted a proposal to build a multi-resident rehabilitation center on Grove Street, a lot back from Centre Avenue where neighborhood groups are trying to locate community amenities. This would be one of several Gaudenzia properties; they also have submitted plans to build commercial property, potentially to include a daycare and recreation center. The nonprofit currently has five addresses in the Hill’s cultural hub, at least two of which are vacant lots.

At the Nov. 30 hearing, the city zoning board allowed residents of the Hill District, including Tate, to comment on Gaudenzia’s proposed construction in their cultural district. The zoning board announced it will make a decision by the first week of January.

According to the Hill CDC and neighbors testifying, the hearing shouldn’t have been taking place to begin with. The Hill Development Review Panel [DRP], a CDC-affiliated committee created by Hill residents, gave Gaudenzia’s proposal a 70 percent score. Projects need 80 percent to pass.

In a letter to Gaudenzia citing why they failed the DRP, the Hill CDC stated there are better uses of the land, in line with the community’s master plan. Additionally, Gaudenzia proposed to demolish a historical building, the original House of the Crossroads.

The CDC states that it offered Gaudenzia five other potential locations that would be a better fit because the land is not in the middle of the envisioned cultural hub — what the community hopes will be a center for African-American culture, including music, food and nightlife.

“We’ve worked very hard to create a process to sort of gauge what development comes to our community... So when there are people who are trying to usurp that process, for whatever reason, that’s concerning to me.” 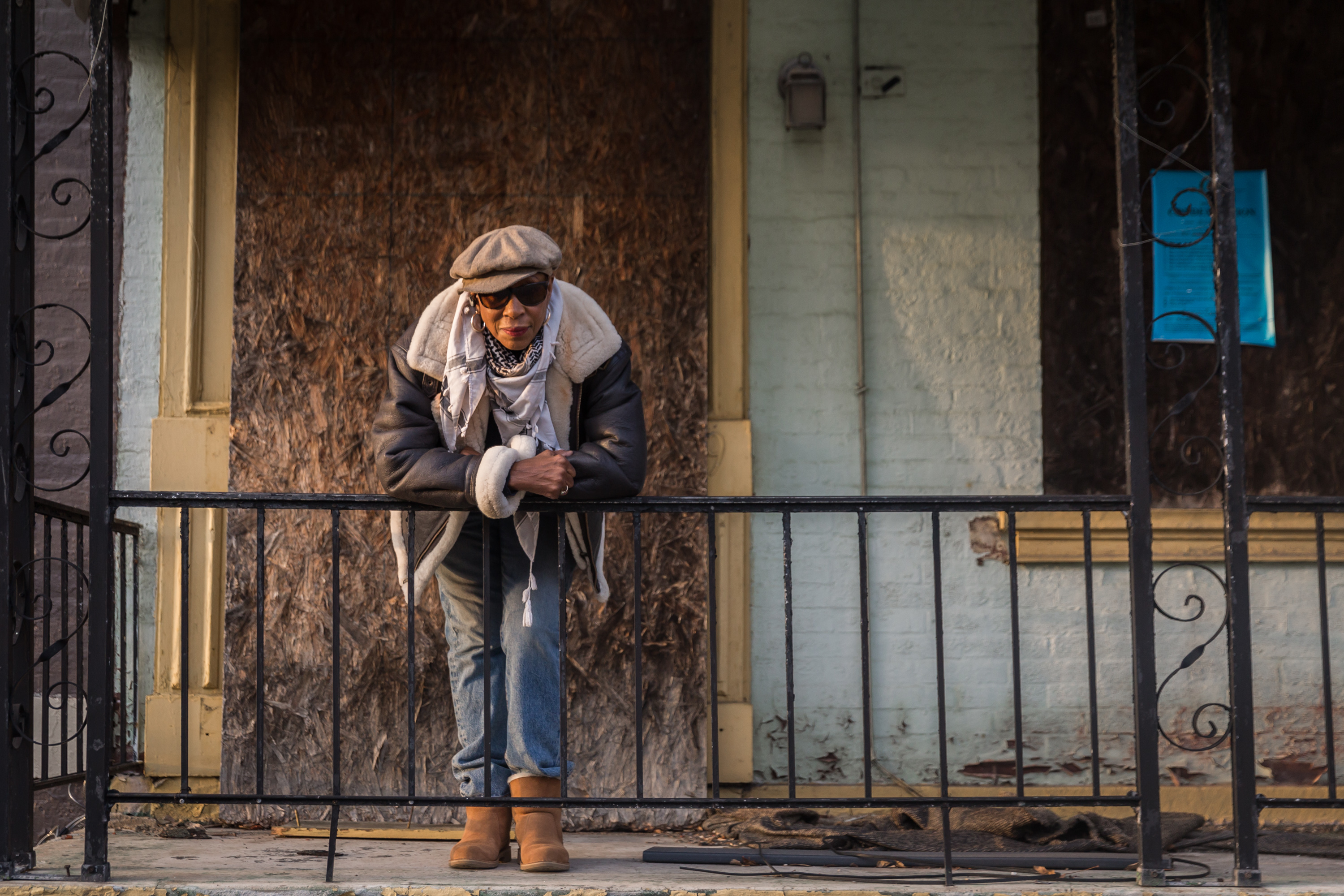 Brenda Tate poses after checking out the Hill District house she lived in for 20 years and while raising both of her sons. She moved to her current home in the Hill in 1966. (Photo by Maranie Rae Staab/PublicSource)

“The master plan wasn’t created overnight. The master plan took months and years and meetings, the community sitting down, figuring it out,” Tate said. “There ought to be a process when they come in... You go to any community in this city, you can’t just show up and put a treatment center there.”

Despite pushback from the community groups, Gaudenzia took its proposal to the city.

At the hearing, Tate told the city zoning board: “I do not oppose the treatment center. I do oppose the process by which we’ve gotten to [this point]. There was no interaction and concern for the community’s request.” Outside the municipal building, she continued. “We’ve worked very hard to create a process to sort of gauge what development comes to our community... So when there are people who are trying to usurp that process, for whatever reason, that’s concerning to me.”

So, why the Hill?

Milliones doesn’t know. “I don’t know if it’s because the Hill is perceived as a vulnerable community that won't be able to protect its own interests. Obviously, if they’ve made that assumption, that’s a big mistake,” she said. “You know, perhaps there’s the perception that there’s not the political will or the political support. Again, that would be a mistake. If you look at the legacy in the Hill District, there is a very, very strong and entrenched legacy in civil rights.”

Not everybody opposes Gaudenzia.

Jesse Hayward is the director of homeless and supportive services at House of the Crossroads. He works at the outpatient building. He says he’s been serving folks in recovery in the Hill for 19 years and maintains that Gaudenzia is an asset to the community.

“In the 50 years that we’ve been here, we’ve done a lot of community services,” he said. “We’re still House of Crossroads, we’re just under management of Gaudenzia.”

Hayward weighed in on the claims by some community members that Gaudenzia isn’t helping people in the community and that its clientele is mostly white. He said one of the center’s employees recently administered Narcan to a Hill District resident who was suffering an overdose and saved his life. As far as the race of the clients they serve, he said, “We don’t look at color.”

“If you drive down Centre Avenue, those aren’t our clients,” Hayward continued. “We welcome them to come to treatment, but people go to treatment when they want to go to treatment... The people that are hanging out in that area have nothing to do with our program.”

Just down the street is FOCUS Pittsburgh, a vibrant and colorful building that houses an outreach program for the impoverished or homeless. Rev. Paul Abernathy, an Iraq War veteran and Orthodox minister, leads the program. He isn’t taking sides between Gaudenzia and the Hill CDC. 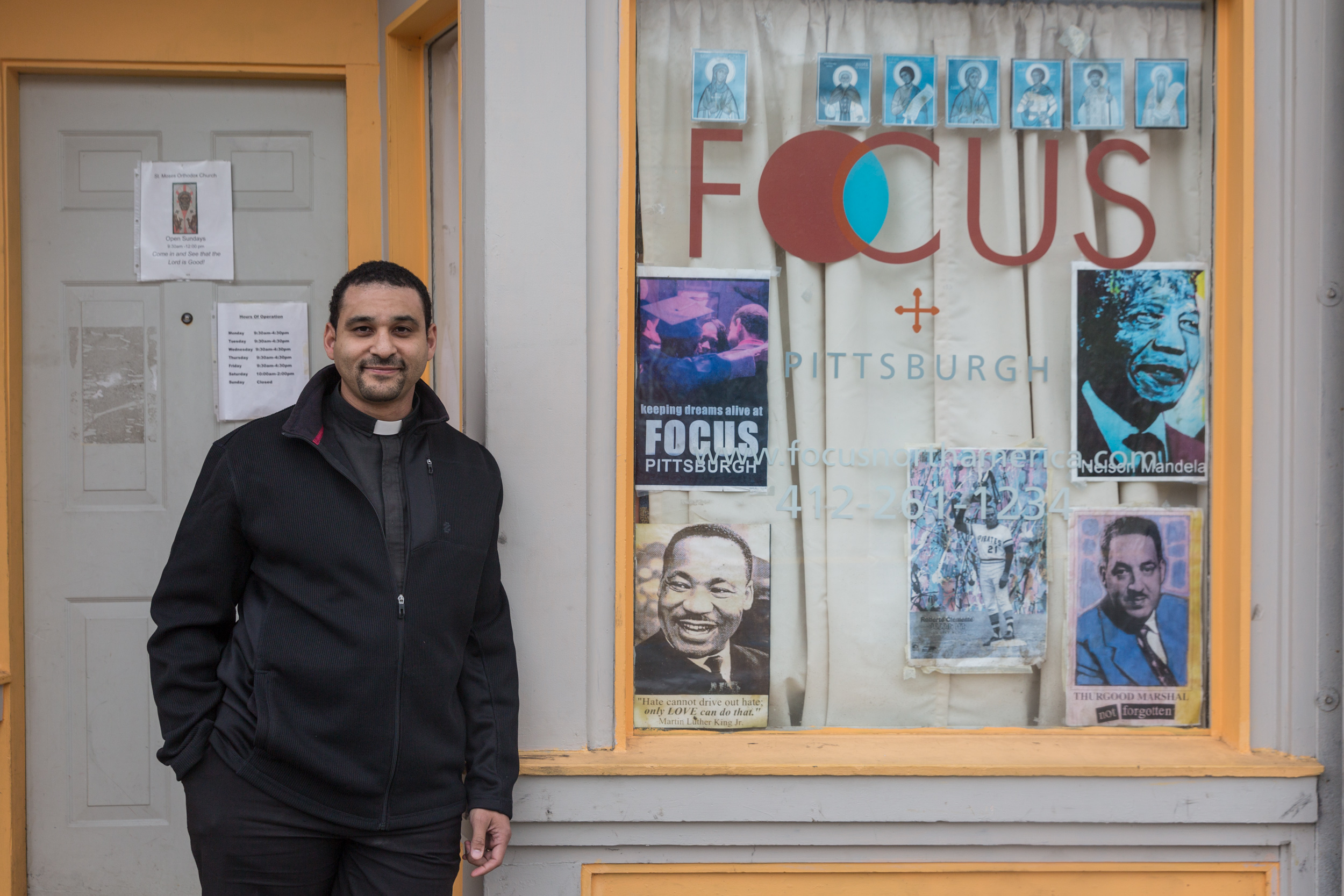 "This is the big challenge here, is that we have this on multiple sides, where people say, or multiple entities [say] that, ‘I am the voice for this community.’ You are not. And the men and women of this community have their own voice... These men and women, who are living in these apartments, who are living up in that house, who are living up on top on Bedford, are they being heard? Or even asked?” Abernathy said. “What happens in these meetings is that everybody invites their sides. And there’s a lot of people that they’re not in there because they’re in survival mode here."

The trauma sustained from the “lock ‘em up” mindset still affects the Hill. Families lost generations of parents and children. Tate says many who were addicted then are often still addicted. 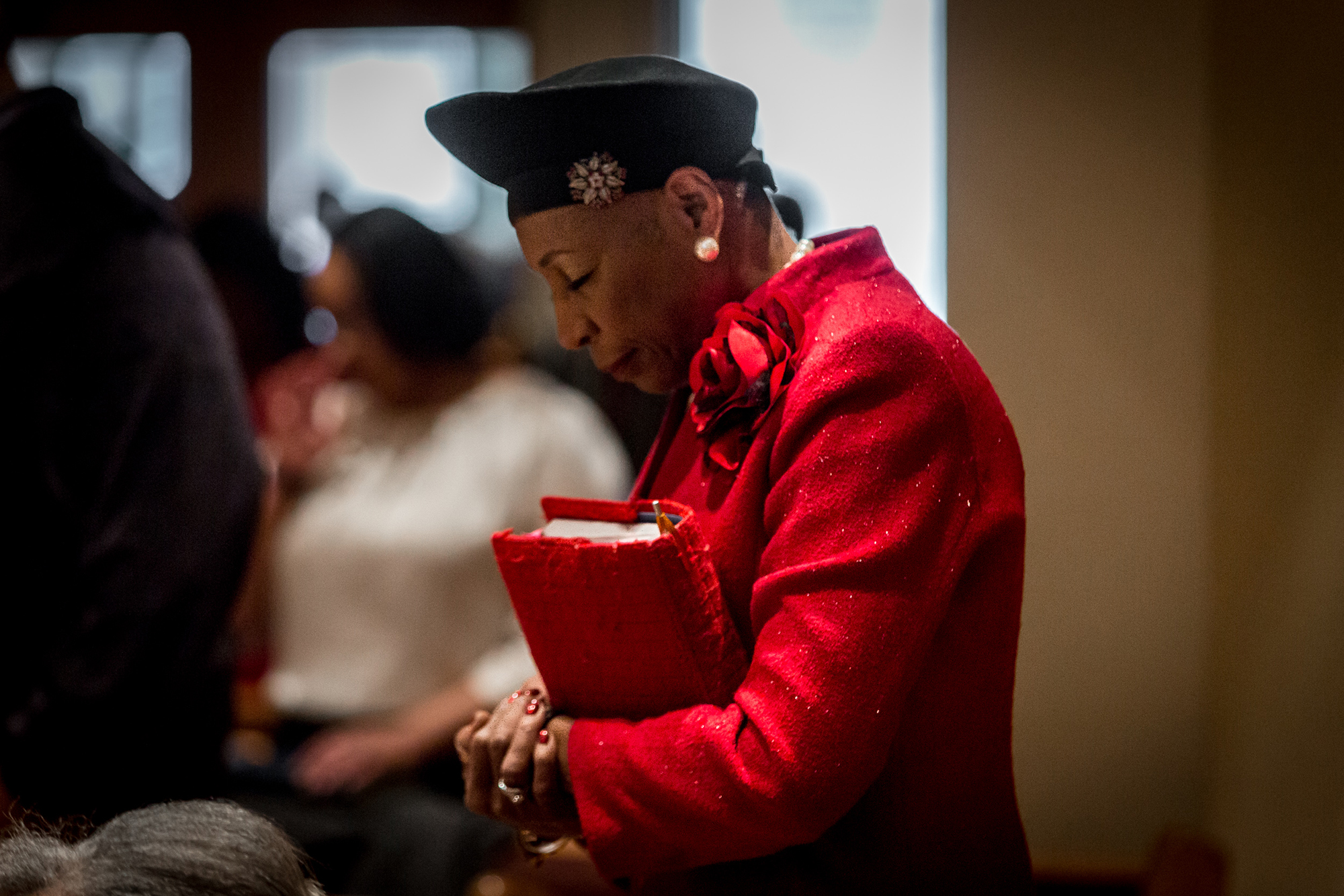 Brenda Tate prays during Christmas Eve morning mass at Ebenezer Baptist Church in the Hill District. Tate says she has been a member of the congregation since 1988. (Photo by Maranie Rae Staab/PublicSource) 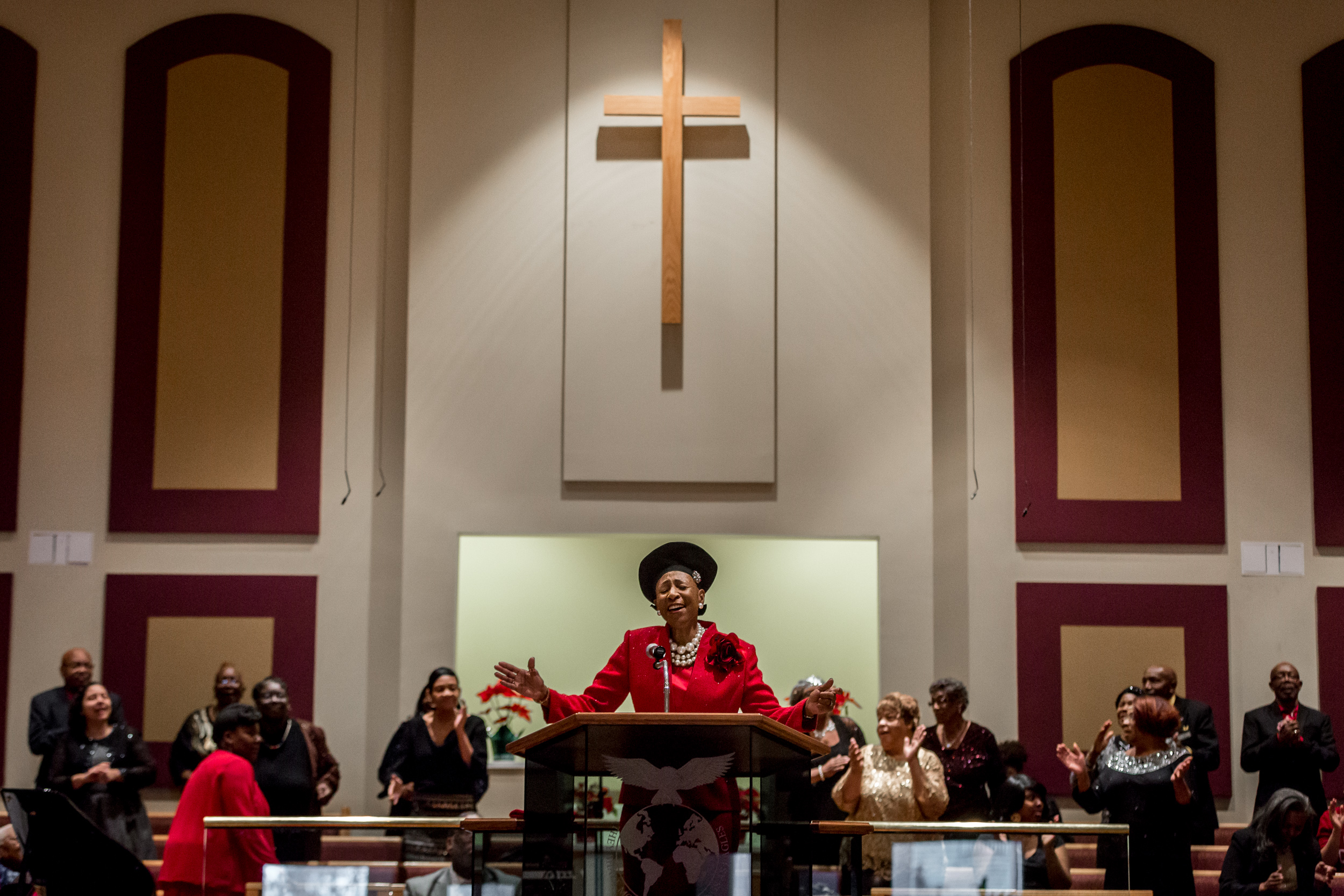 Brenda Tate at the pulpit of the Ebenezer Baptist Church on Christmas Eve. Tate said she made announcements for the church congregation. (Photo by Maranie Rae Staab/PublicSource)

Tate’s eyes meet mine in her rearview mirror.

“This community lost lots of folks to heroin. I look back in my mind and I just see all the people that I grew up with that are gone from heroin. There was no outcry. Personally, I have to know at least 50 people in this community from heroin overdoses.”

She parks her shiny red Volkswagen across the street from the huddled men, right next to the Grove Street lot where Gaudenzia is proposing to build.

Behind her car, a man in a hooded coat stumbles down the alley. Tate sees him in her rearview mirror and recognizes him. “He’s been on heroin all his life,” she says.

The man reaches into a white sedan and the car speeds off. “He just copped,” Tate says, meaning he just bought heroin.

Tate puts her car in drive, and we head toward where the incline used to be in the Hill. Tate insists we see the overlook of the city. She is proud, I can tell. She tells me a story of rebirth: a community once ravaged by drugs and addiction is finally bouncing back. 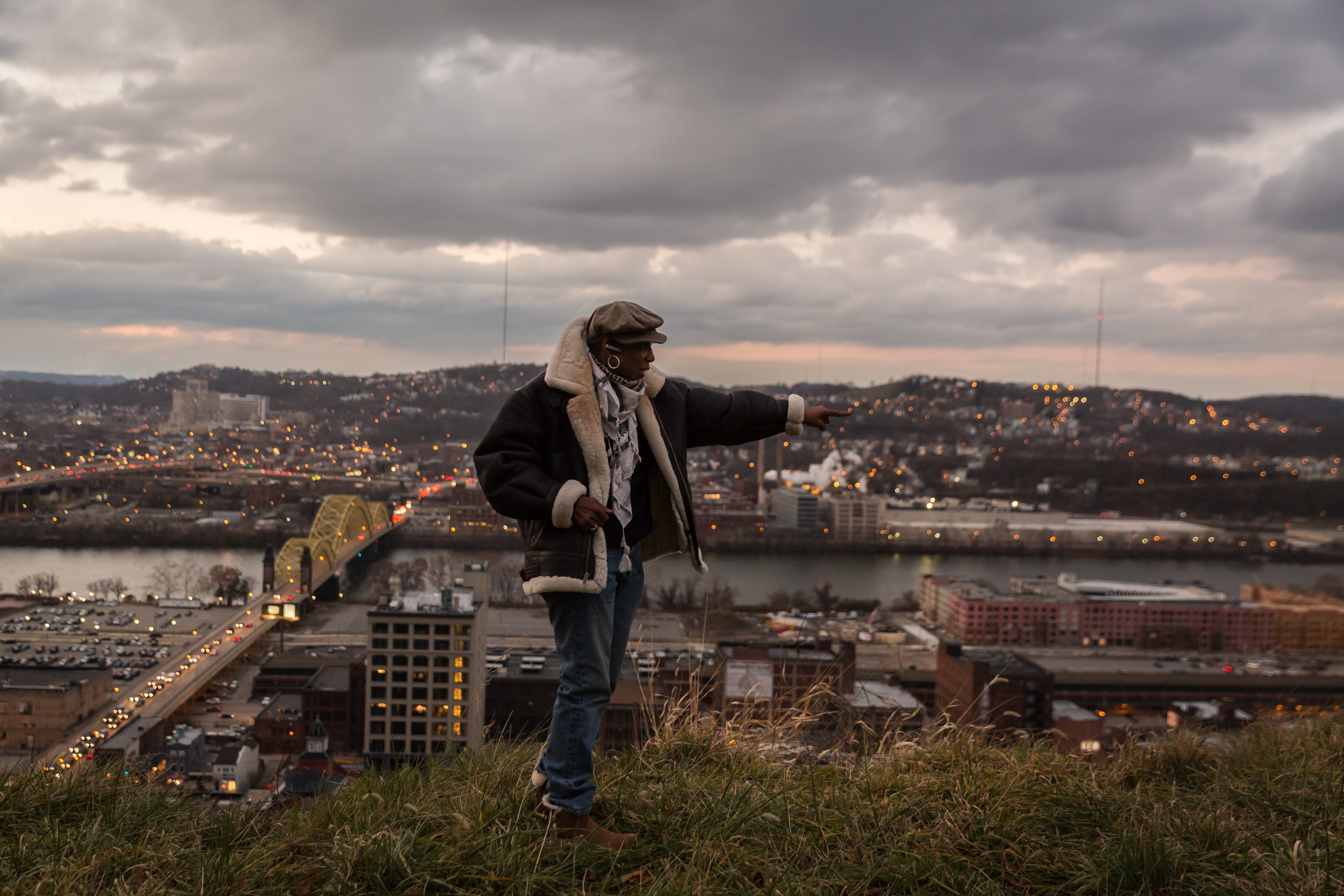 Brenda Tate talks about the Hill District's city views and how she used to be her father’s lookout when he stole scrap from the old incline. (Photo by Maranie Rae Staab/PublicSource)

Tate points to the houses of folks who rebuilt their homes brick by brick. She talks with her hands, smiles and, when we reach the overlook, jumps out of the car. She insists I get out and peer over the precipice. “It’s not that cold!” she yells. She tells me she used to be her father’s lookout when he stole scrap from the old incline, tells me that I won’t see another view like this, tells me, “Come look!”  And she is right. The Strip District and the river twinkle with Christmas lights, car lights and the sunset. Tate beams.

“Now, since we’re kinda like dusting off the coal around the diamond and getting it prepared, here they come. Here they come. And not only are they here, do they show up, they’re disrespectful about it,” she said. “I just hope they would step back and do the right thing and do what we proposed earlier. ...There’s plenty of places that they could move that would be a good fit.”