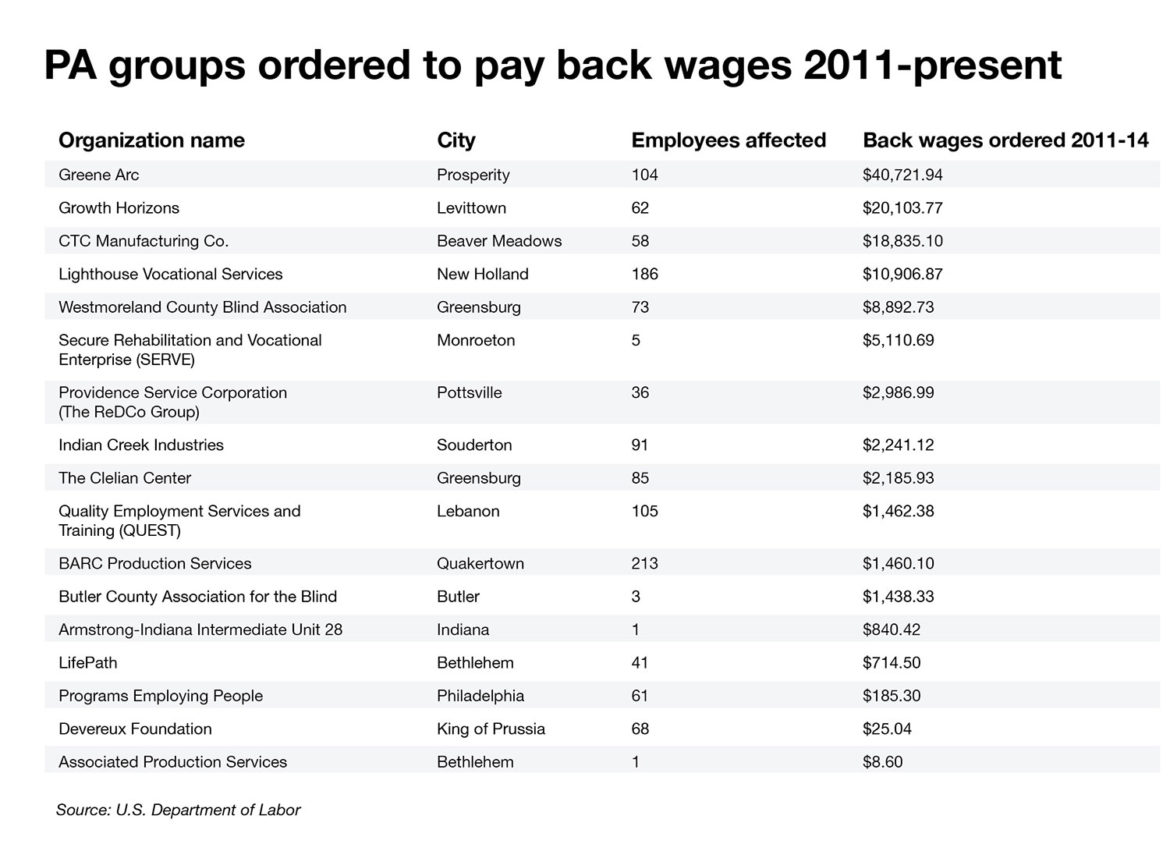 The U.S. Department of Labor has ordered Pennsylvania organizations to pay $118,000 in back wages to workers with disabilities since 2011, according to records PublicSource obtained through a Freedom of Information Act request.

At the heart of these investigations are people with intellectual and developmental disabilities, many of whom cannot advocate for themselves.

The workers already were earning far below minimum wage because the employers have a special license to pay people with disabilities less.

There is very little oversight on the state or national level of these employers, making it  impossible to know how widespread the pay issues are and whether they are accidental or intentional.

Over nearly four years, the labor department has conducted only 29 investigations in the state, primarily of nonprofits that were granted a federal license to pay ‘special minimum wages’ to workers whose productivity is affected by a disability.

There are currently 126 organizations in the state with the license. About 13,000 disabled Pennsylvanians earn an average of $2.40 an hour in these subminimum-wage work programs, according to a PublicSource analysis of federal labor documents.

The audits resulted in orders for 17 organizations to pay back wages to 1,193 employees, including non-disabled employees in some cases.

Two organizations — Growth Horizons in Bucks County, and Greene Arc in Greene County — were investigated twice in the time period. The inquiries were concluded after the groups agreed to pay back wages and promised future compliance.

The Greene Arc was ordered to pay more back wages than any other group, owing more than $40,000 after a 2013 investigation found that the nonprofit did not use the appropriate standard for setting wages for the workers.

The investigation also found that Greene Arc was deducting the allowed 15-minute breaks from the employees' overall hours worked.

Disabled workers at Greene Arc were earning an average of $3.59 an hour for shredding, food preparation, recycling and greenhouse work, according to its 2012-14 application.

Cynthia Dias, executive director of Greene Arc, said she could not comment on the findings of the investigation because she was traveling.

Growth Horizons paid about $9,700 in back wages to 55 workers with disabilities when it let its federal certificate to pay special minimum wages lapse in 2012. In addition, an investigator discovered that the prevailing wage and piece rates were not calculated correctly, according to department records.

In late 2013, records show the nonprofit group was hit with another violation because some staff members who supervise disabled volunteers were being docked pay for lunch breaks they were not taking. Seven employees were paid about $10,400 in back wages.

As of its latest application dated January 2014, 52 employees at Growth Horizons earned an average of $1.53 an hour for piece-rate assembly.

Officials at Growth Horizons did not respond to requests for comment by deadline.

There are about 3,300 employers in the country who are authorized to pay below minimum wage to workers with disabilities.

Nationwide, the labor department conducted about 250 investigations of these employers in fiscal year 2013; it found nearly $1.4 million in back wages were owed to more than 7,400 employees, according to officials.

Investigations are conducted for a variety of reasons. The labor department may receive a complaint or its investigators may believe an organization is doing something wrong based on information provided during the certification process, said Ellenjayne MacPherson, regional enforcement coordinator for the department’s wage and hour division in Philadelphia.

“It doesn’t mean we’ll be checking the same people but often there will be a recidivism component put in,” she said.

Anil Lewis, deputy executive director of the National Federation of the Blind Jernigan Institute, said the paper process by which employers apply to pay the low wages makes it simple to game the system.

“If the entities had to input the data in a more automated fashion, the department would be more likely to catch the bad actors,” he said.

Labor department officials say they are considering ways to automate the process and have provided an online calculator to assist agencies in correctly filling out the applications.