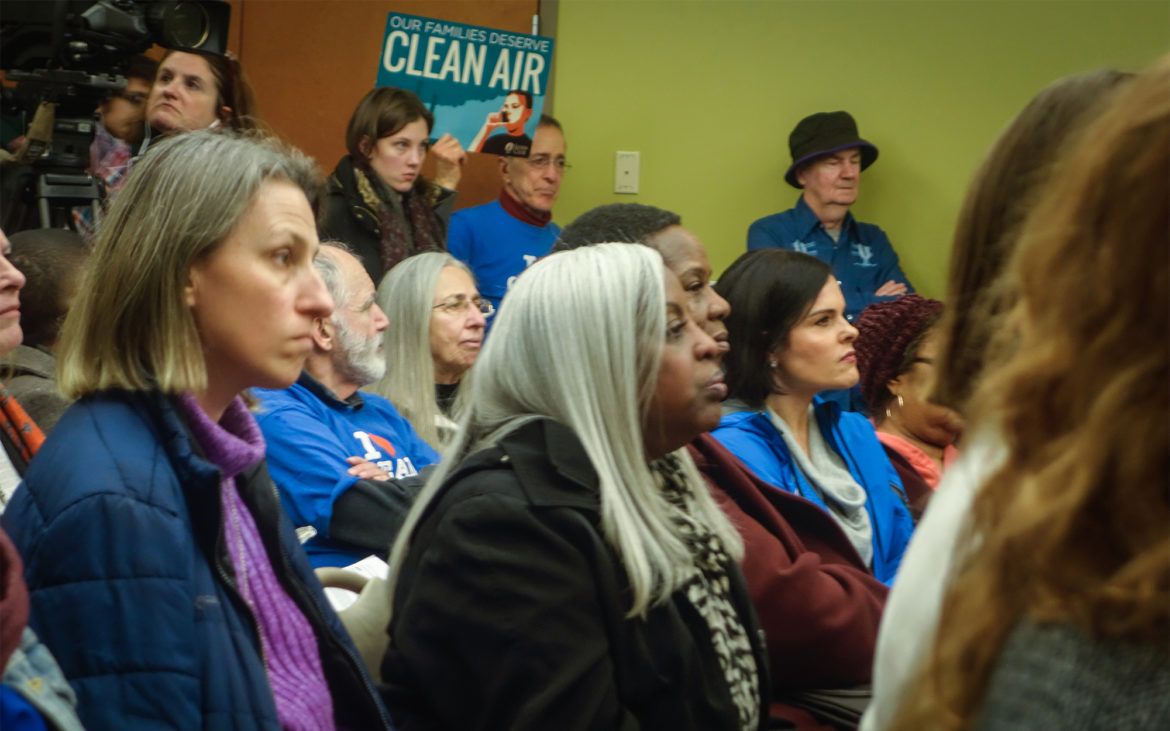 On Wednesday, residents and officials spoke out at a press conference about the response to the Clairton Coke Works fire on Christmas Eve. (Photo by Oliver Morrison/PublicSource)

Local residents and elected officials held a press conference Wednesday to sharply criticize U.S. Steel and Allegheny County for their responses to a Christmas Eve fire at the Clairton Coke Works.

The fire damaged equipment that is responsible for cleaning sulfur dioxide before it’s emitted into the community. Sulfur dioxide can irritate the lungs.

“Why weren’t children, why weren’t parents notified?” asked Allegheny County Controller Chelsa Wagner, to the roughly 40 people at the press conference. “You don’t need to go through complex regulations and so-called protocol to go through common sense.”

Several public officials and Clairton residents said that, except for a brief post on Facebook, the county did little to communicate about the fire and resulting pollution concern for more than two weeks. (Photo by Oliver Morrison/PublicSource)

Wagner and several Clairton residents said that, except for a brief post on Facebook, the county did little to communicate about the fire and resulting pollution concern for more than two weeks. By that point, a local air monitor had recorded pollution in excess of the legal limit on six occasions.

On Jan. 9, the county advised residents near the plant to stay indoors because of increased pollution. But Rep. Summer Lee, a Democrat in the 34th district who is from Braddock, said the way the county shared that information implied a lack of concern for residents.

In a Jan. 16 statement, the county admitted that it hadn’t done enough to communicate with residents at first and has since increased its efforts. 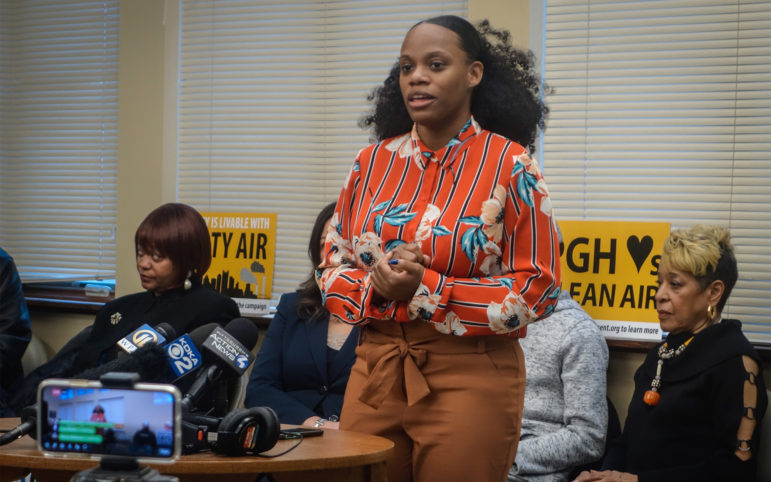 “I was sitting on Facebook and saw that we couldn’t go outside,” said Rep. Summer Lee, a Democrat in the 34th district. “They said it so nonchalantly, that this was par for course for your community. This is not natural. This is not natural and it is not fair.” (Photo by Oliver Morrison/PublicSource)

“We know that we need to do a better job of communicating information to impacted residents,” according to a statement from Karen Hacker, the director of the health department.

Since then, Hacker has released weekly emails updating the community on the situation and daily updates on air quality. She has met with community groups, appeared at community meetings, held a press conference and pushed U.S. Steel to communicate more directly with the public as well. The company is now updating the public through a dedicated website.

Braddock resident Colette Walsh has a son who suffers from asthma. She said at the Wednesday press conference in the Clairton Economic Development Center that other residents tell her she can move somewhere else if she doesn’t like the air quality but she said she can’t afford it.

Matthew Mehalik, the executive director of the Breathe Project, and several others at the meeting called on U.S. Steel to “hot idle” the coke ovens until the fire repairs have been made. Hot idling, he said, is a way to keep the ovens heated and operational, so the plant doesn’t have to close until the risks of pollution have been eliminated. The county, Mehalik said, could order the plant to do this because he doesn’t believe the company is abiding by the terms of their permits.

“No other business is allowed to operate illegally,” Mehalik said. “And that’s more or less what’s happening.” 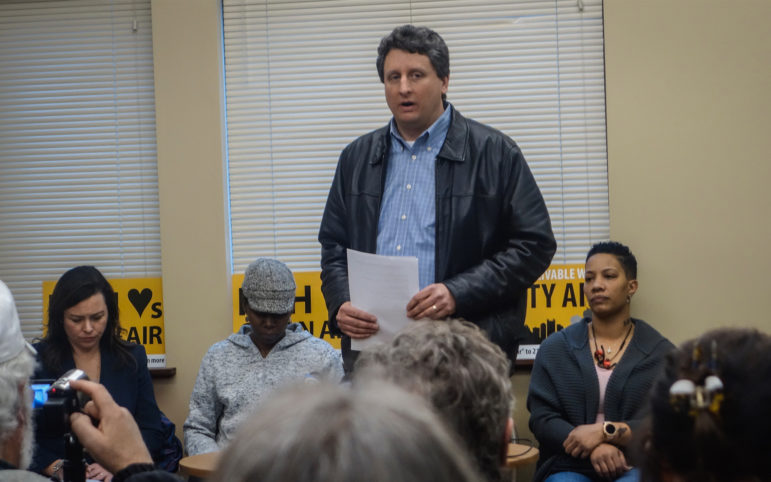 Matthew Mehalik, the executive director of the Breathe Project, and several others at the meeting called on U.S. Steel to “hot idle” the coke ovens until the fire repairs have been made. (Photo by Oliver Morrison/PublicSource)

A spokesperson for U.S. Steel, Meghan Cox, said the process of hot idling isn’t simple and would’ve taken energy away from the plant’s efforts to reduce the pollution in the short term, and would likely cause job losses in the long term.

“It is not possible to shut down a coke-making facility rapidly as hot idling is a deliberate and lengthy process (due to the extreme temperatures of the ovens and need to safely control explosive gas),” she wrote in an email. “...Such a hot idle action would likely have an adverse impact on the operating levels of all of our Mon Valley facilities and could result in workforce reductions. ” 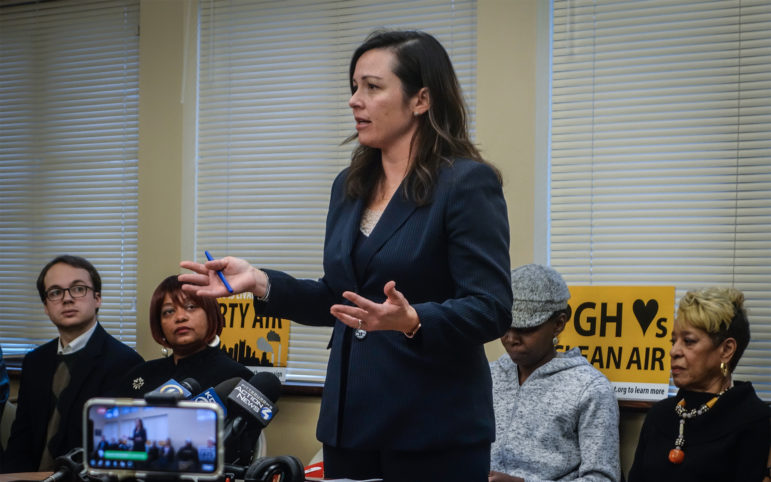 Chelsa Wagner, the county controller, said it is time for the elected leadership at the county to take responsibility for the response to the fire at the Clairton Coke Works. She called the county’s response a failure of government to fulfill its most basic function to protect citizens. (Photo by Oliver Morrison/PublicSource)

Wagner said it is time for the elected leadership at the county to take responsibility. She called the county’s response a failure of government to fulfill its most basic function to protect citizens.

“Our families all deserve answers and we all deserve to hear plainly what the response is going to be from county government, from Rich Fitzgerald,” she said.

Amie Downs, a spokesperson for County Executive Rich Fitzgerald, wrote in an email that he has spoken about holding the Clairton plant accountable for years. And she reiterated his support for Hacker and the health department, under whose leadership the county has issued larger fines than ever before.

“Dr. Hacker is the strongest advocate for air quality and health that this county has ever had…” Downs wrote in an email. “The County Executive has asked her to do everything she can to effect change in this community, and she is delivering.”

Although pollution levels have not exceeded the legal limits in more than two weeks, an air quality alert remains in effect.

Ryan Scarpino, a spokesperson for the county health department, wrote in an email: “While there have not been any [sulfur dioxide] exceedances since that time, the plant repairs are ongoing, and there is still a risk for future exceedances.”