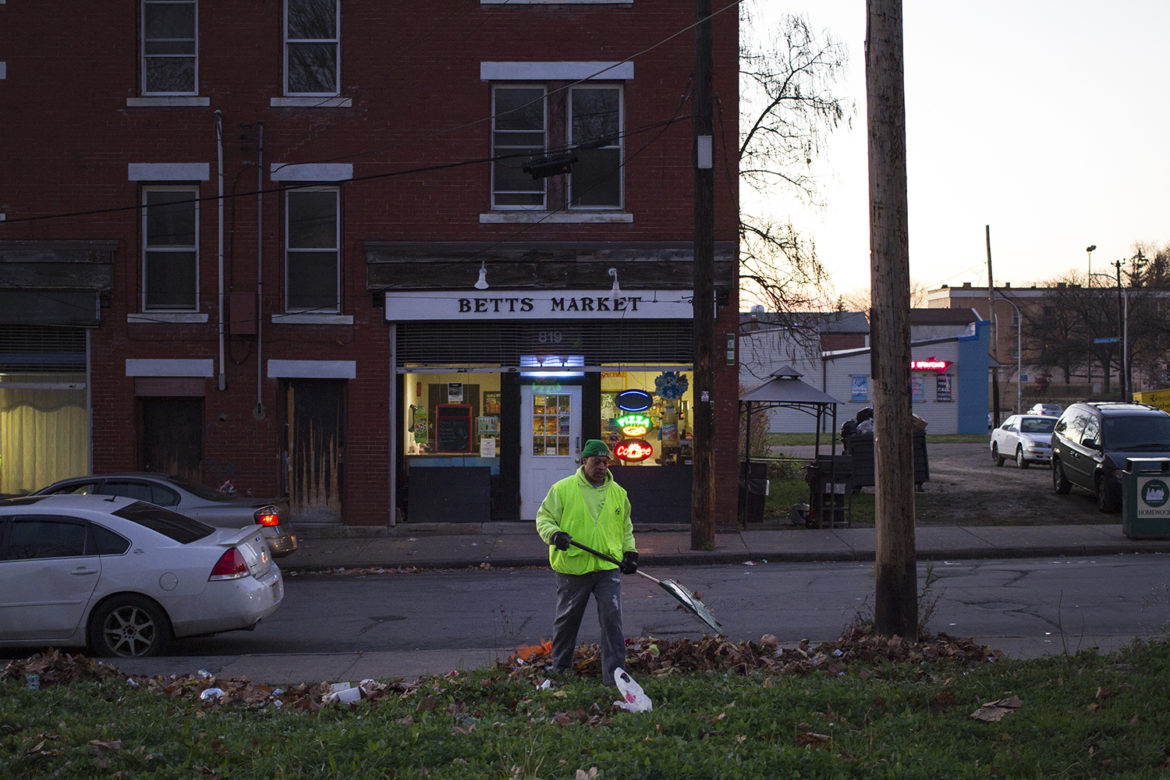 Stopping violence starts with showing up.

In bright green vests, the Greater Pittsburgh Area MAD DADS patrol the corner of North Homewood and Frankstown avenues. It’s a bustling strip, known for its drug activity and violence.

The nearby area is clustered with scenes of numerous shootings and homicides, many involving black teenagers and young men. A 53-year-old man was killed there in broad daylight last year. It happened again Feb. 3 with the fatal shooting of a 27-year-old.

Most city residents avoid this corner. The MAD DADS visit regularly, in addition to many other troubled areas. Their philosophy is simple: Be a positive presence.

“When the good guys come up, the bad guys seem to disappear,” Jay Gilmer, a MAD DADS volunteer who also serves as a coordinator of the city’s anti-violence program, said on an October patrol.

While some see violence and drug commerce as inevitable, almost normal, these men — along with many other residents who’ve taken action — believe they have an obligation to do something.

For years, Pittsburgh police have been criticized for struggling to reduce retaliatory violence and to regain community trust. As the bureau recasts its efforts, residents continue the work they’ve been doing for years to make their neighborhoods safer and keep young men away from violence.

The local MAD DADS started in Wilkinsburg in 2006. Founder George Spencer learned about the work of the original group in Omaha, Neb., which was founded by black men and fathers to reduce gang violence. He saw a need in the Pittsburgh area and soon found himself leading a chapter.

Patrols run countywide and focus on areas like Wilkinsburg, Clairton, Homewood, East Hills, and anywhere else they’re asked to go. They clean up vacant lots, bagging up blunt wrappers and liquor bottles, introducing themselves to anyone around, and they do the same at corners where young men might gather to sell drugs.

When the Pittsburgh police talk about community policing, this is essentially the civilian version.

The men show up, face to face, engaging the youth and anyone else who will listen, opening the possibility for a positive relationship.

It’s proactive outreach, not law enforcement, and it’s an effort to reach young men before crime and violence does their lives irreparable harm.

Much of the violence in Pittsburgh involves retaliation. The MAD DADS see an opportunity to defuse the tension so one shooting won’t lead to another.

In the most heated situation, it’s a basic plea for humanity. Stop the killing.

“That disarms usually even the most ruthless guy out there,” Spencer said. “It’s hard to get around, ‘These guys are here because they don’t want anybody to die.’”

Police complain a lot about residents not testifying.

Wynona Hawkins-Harper, a 51-year-old resident of Penn Hills, has been outspoken about the need for witnesses to come forward.

She knows all too personally that the justice system won’t work unless someone tells authorities what they’ve seen. Her nephew Donté Hawkins was murdered in Pittsburgh in 2012. The next year, her son Jamar Hawkins was murdered at the age of 31 in Penn Hills. Both homicides are unsolved.

At the same time, she fears witnesses put themselves at risk and won’t be protected by authorities if they testify, a common fear acknowledged widely by police.

In September, Hawkins-Harper helped organize an event at the Penn Hills YMCA to remember her son and nephew and spur community action to stop the violence.

The MAD DADS were there, as were Allegheny County Executive Rich Fitzgerald and people associated with CeaseFire PA, a statewide group focused on ending gun violence.

Yusuf Owens, who runs Martial Artists Against Street Violence in Larimer, a neighborhood in the East End, made a plea at the event for residents who see violence to speak out. The correct term is witnesses, he said, “not snitches.” Grand Master Jacquet Bazemore leads a class at Martial Artists Against Street Violence, or MAASV, on Frankstown Avenue in Pittsburgh. The academy aims to teach martial arts as an alternative to violence in the community. (Photo by Ryan Loew/PublicSource)

A group of martial artists had set up cinder blocks marked with the words, “Violence,” “Addiction” and “Homicide,” and broke them for the crowd. Instructor Jacquet Bazemore crumbled the last stack — five blocks thick — with his forehead.

The group uses martial arts to help youth build discipline and character and to know that someone is interested in their lives.

“One going to jail, another one in the ground,” Owens said, “that’s the system we have to change.”

Hawkins-Harper has the same goal with her organization, Jamar Place of Peace.

She said she is currently scouting locations to set up a shelter for residents. She credits Penn Hills and Allegheny County officials for their support and envisions the organization as a resource to connect those in need to social services so they can rebuild their lives away from drugs and crime.

“You can’t turn your nose up to people that need help. Help them,” she said.

It’s her personal mission to keep these men — inmates transitioning from state, county and federal incarceration — from ending up like her son Raymond, who was murdered in 2001 in the Hill District at age 23.

She describes him as an unrepentant drug dealer who was fatally shot and abandoned on a filthy floor in a public housing project. He was the son she loved dearly and hoped would walk away from that life.

In the cafeteria at Renewal Inc.’s downtown Pittsburgh housing facility, she asks the men if they’ve known anyone who was murdered.

Hands go up across the room. Some tell their stories. A best friend killed, a brother. One man knew her son.

Then Germany tells the story of Raymond’s life and death, and she recreates her visit to the hospital to see his body. She whispers, chants, and she screams, pacing around the cafeteria, reliving the loss and pleading for the men to move beyond their mistakes.

Afterward, some inmates hug her. Some enroll in the faith-based program at the facility, put on by Divine Intervention Ministries, which she started after her son’s death. Others get their attendance form signed and quietly leave.

For Germany, change starts with faith. But her organization also provides help finding housing, counseling and employment to those seeking to shed their criminal lifestyles. A concrete alternative to selling drugs.

“When you find somebody that’s ready to walk away,” Germany said, “you better have something real, not just some talk.” There are resident groups like these, and many others, who are working to stop violence. Often they’re started as a response to tragedy by residents who want to prevent further harm.

They all struggle for attention.

Pittsburgh Police Chief Cameron McLay has said public safety depends on whole neighborhoods joining together to say violence won’t be tolerated. By relaunching its anti-violence strategy and focusing on community policing, the police bureau is trying to be a part of that.

The problems are not new. Officials say they are making progress. It’s all tentative.

“I will publicly say early and often that we police could do everything right,” McLay said, “and not be able to make a dent if the community’s not willing to work with us.”

Jacquet Bazemore, who is featured in our story for his work with Martial Artists Against Street Violence, died in his sleep on Feb. 14.

Reach Jeffrey Benzing at 412-315-0265 or jbenzing@publicsource.org. Follow him on Twitter @jabenzing. Megan Harris of WESA contributed to this report.