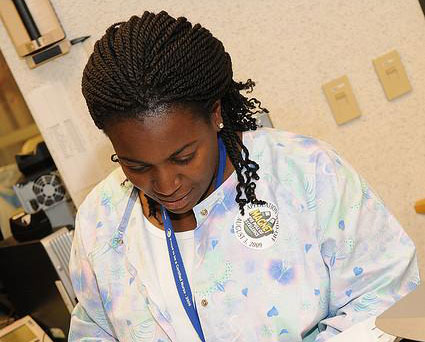 Pennsylvania nursing homes are double-dipping in taxpayers’ pockets, according to a new report by a Harrisburg policy research organization.

The Keystone Research Center’s [KRC] report, released yesterday, asserts that even though nursing homes have proven to be a profitable industry, they are taking advantage of the public, first by taking government subsidies for the healthcare provided to residents and second, by paying low wages to caregivers, forcing the workforce to rely on public assistance.

About 87,000 people work at nursing homes in Pennsylvania. The average hourly pay for a certified nursing assistant is $13; it’s usually a few dollars less for employees who work in dietary, maintenance and other non-direct care jobs, according to the report.

The ‘poverty wages’ paid to nursing home workers — according to report author Stephen Herzenberg, executive director of KRC — lead to higher turnover in staff, which interrupts the quality of care to residents and wastes money in training new hires.

“If we hope to strengthen the state’s economic recovery, rebuild the middle class and ensure that the commonwealth’s aging population receives the consistent, quality care it deserves, caregivers need to make a living wage of at least $15 per hour,” Herzenberg said in a conference call announcing the report’s findings.

A minimum start rate of $15 per hour at nursing homes would benefit nearly 50,000 workers. It would also put over $300 million into their pockets, generating about 1,500 jobs at Pennsylvania businesses and generating over $30 million in new tax revenue for the state and municipalities.

Nursing home workers in Pennsylvania are joining a national movement, dubbed the Fight for $15, alongside employees in retail, fast food, custodial, security, and even adjunct professors, to call for a raise in wages.

That’s a higher ask than what Gov. Tom Wolf has said he would support, which is an increase from the current minimum wage of $7.25 to $10.10 an hour.

Tomorrow, on April 15, there will be rallies in Pittsburgh and Philadelphia as well as Erie, Altoona, State College, Harrisburg, Scranton, Allentown and Washington, Pa.

“Workers chose tax day to highlight their demands and call on profitable corporations to pay wages high enough that they won’t have to rely on public assistance,” said Matt Yarnell, vice president of long-term care for SEIU Healthcare Pennsylvania.

According to the KRC report, about half — 52 percent —  of nursing home workers surveyed say they cannot support their families on the wages they are paid; 16 percent say they work more than one job.

Nursing assistants at the Allegheny County-owned Kane Regional Centers typically earn between $16 and $18 according to experience level, Administrator Dennis Biondo told PublicSource in January. With overtime pay, many take home much more.

Leslie Housewart, a certified nursing assistant in Pittsburgh, has three kids, ages 2, 5 and 9. Medicaid pays for her children’s health insurance and subsidized daycare.

“If it wasn’t for that I wouldn’t be able to go to work every day. I’d be a full-time welfare mother,” she said during the conference call. “I have enough to survive, thanks to public assistance, but not enough to live.”

According to the report’s survey of nursing home employees:

• Fourteen percent of nurse aides say they or someone in their household receives public assistance.

•Twenty-eight percent of dietary workers say they or someone in their household receives public assistance.

•The biggest forms of public assistance used are food banks and food stamps.

Housewart said the low wages affect her children because they miss out on trips to the zoo and amusement parks. The stress and distraction of trying to put food on the table or affording gas to get to work makes an already difficult caregiving job that much more challenging, she said.

“If we were paid a fraction of what we’re worth, it would make a huge difference in our lives, our children’s lives and the lives of the people we care for,” she said. “Honestly, I believe in my heart that it’s time that nursing homes invest in their workers.”

The report offers a few recommendations. One urges lawmakers to propose legislation that would require nursing homes to report employee wages, so consumers know which facilities pay a living wage.

Another suggestion, according to the report, calls for scrutiny at the top. The report called out executives at national nursing-home chains who earn millions of dollars annually.

Some of the resources for lifting wages at the bottom should come from reining in excessive compensation at the top... For an industry that derives most of its revenue from public sources, why are CEO salaries over 600 times the average nursing assistant’s salary acceptable?

“Our report asks a basic values question,” Herzenberg said. “Nursing home workers perform demanding and difficult work, caring for vulnerable seniors and people with disabilities … but who cares for them? [An increase to $15 an hour] would give nursing home workers the stability to give the best care in the nation.”