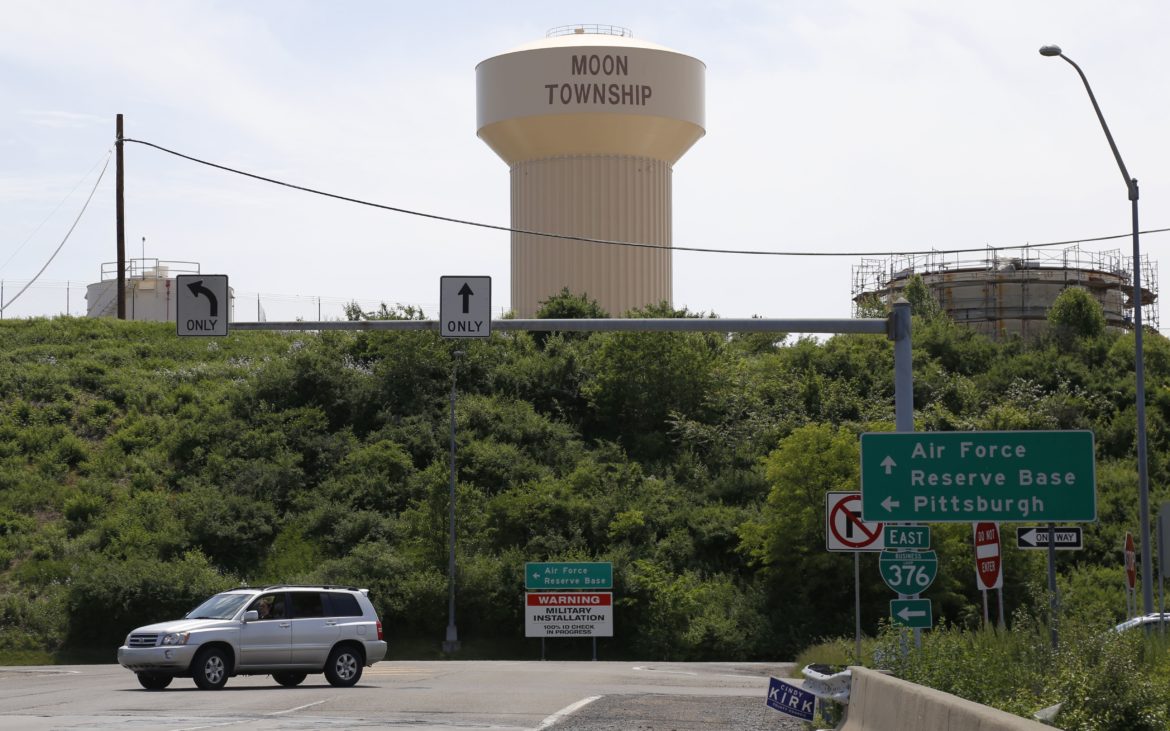 Editor's note: This story is part of an ongoing collaboration between PublicSource and Environmental Health News on PFAS contamination in Pennsylvania and was funded in part through the Bridge Pittsburgh Media Partnership.

Sarah Chromack has lived in her house just south of the Pittsburgh International Airport since the 1960s.

She’s been drinking water out of a private well in her basement the entire time.

According to a recent report from the U.S. National Guard, toxic firefighting foam has, over time, contaminated the surface and groundwater at two military bases at the southeast end of the airport, fewer than 1.5 miles from Chromack’s home.

The foam contains several chemicals referred to as per- and polyfluoroalkyl substances [PFAS], which have been linked to low birthweight, thyroid problems, immune system disruptions and cancer.

The Pennsylvania Department of Environmental Protection [DEP] has begun testing hundreds of public drinking water systems in the state to see how far PFAS contamination extends, but the DEP isn’t saying where exactly it is conducting the tests. 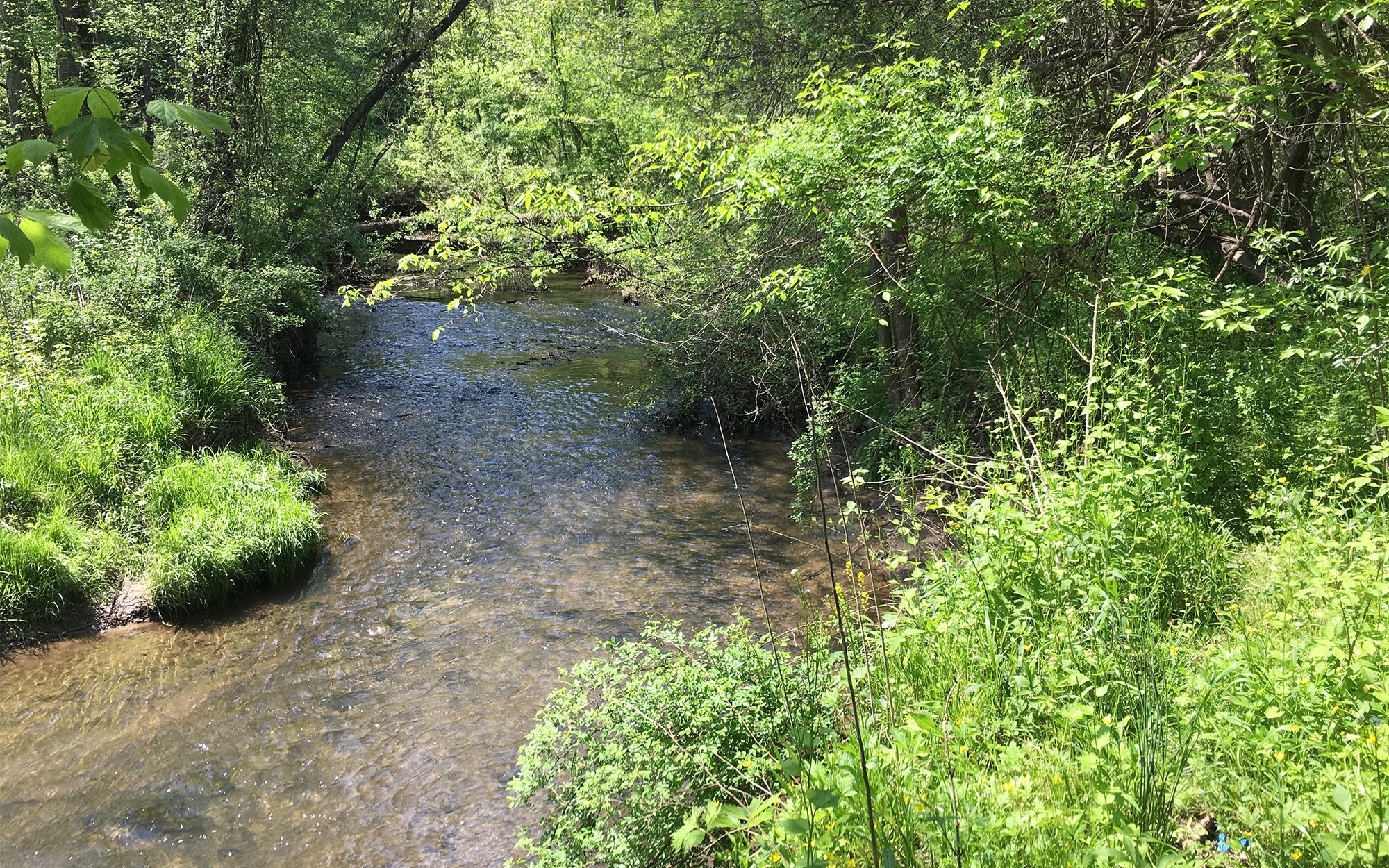 A stream across the street from Sarah Chromack’s home starts 2 miles up the road, right next to a firefighting training facility at the Pittsburgh airport. Scientists think it's likely that there is PFAS contamination nearby. (Photo by Oliver Morrison/PublicSource)

It’s not clear if Chromack’s water has been impacted, and the DEP has no current plans to test private wells like hers. Since the Guard report was released in October without fanfare, no one has informed Chromack or nearby residents of its findings.

Chromack, 78, doesn’t know anything about PFAS chemicals and their potential health dangers.

But she is afraid she will have to start paying for public water if her well turns out to be contaminated. When Findlay Township previously offered to connect her home to the city’s water supply, she said she couldn’t afford it: Her husband passed away from brain cancer 30 years ago, and she is living on a single income.

A new financial burden could be the difference between staying in her own home or not.

"I just can’t afford it,” she said. "I don’t get much money on Social Security.”

The Pittsburgh bases were added to the state’s list of contamination sites in November after the National Guard report was released. But there was no press release making the report’s existence known and the report has not previously been covered in the media. 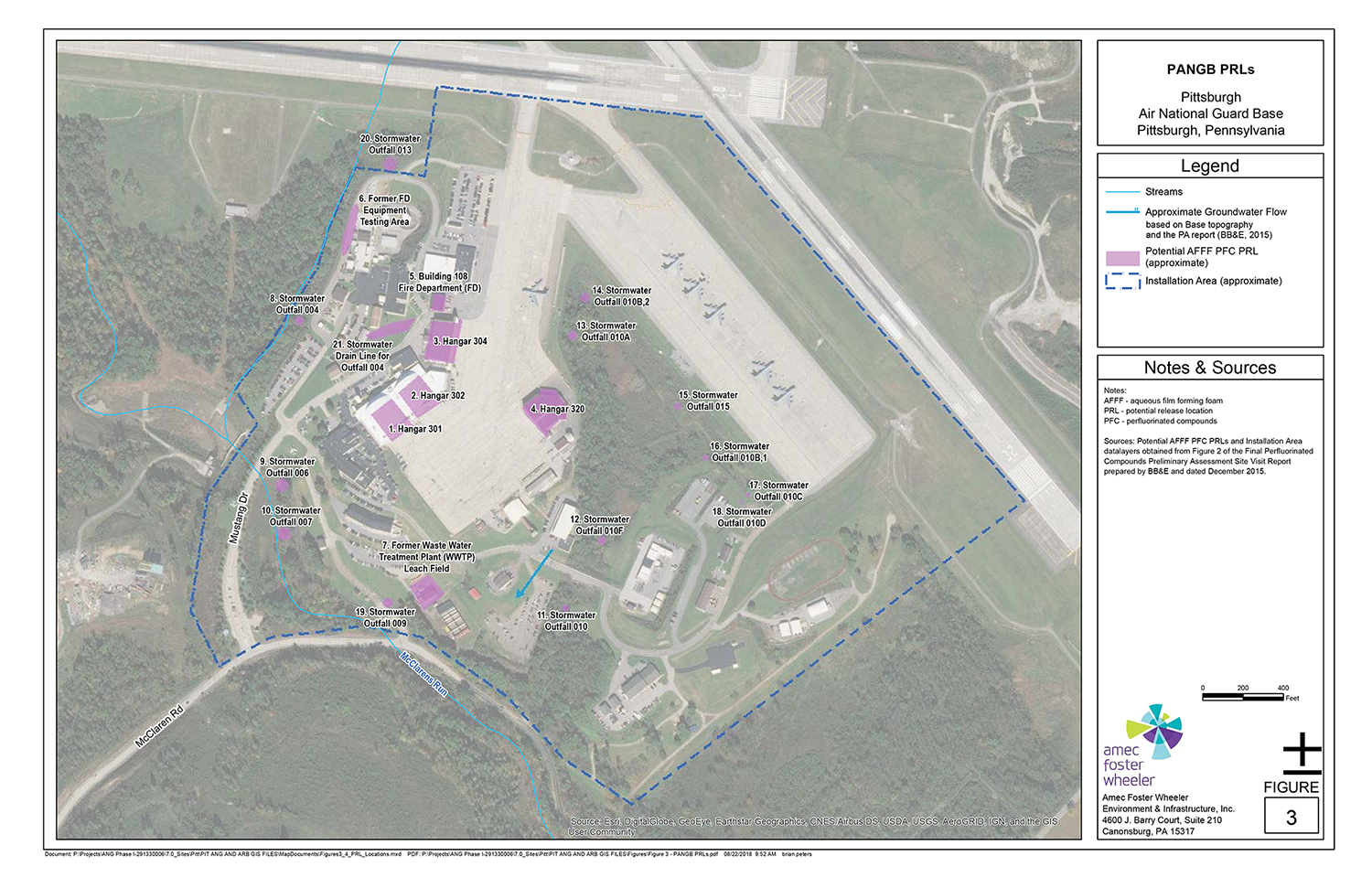 The MTMA tested its water in December in response to a PublicSource article about PFAS chemicals. The test showed the contamination is low enough to safely drink the water. The test found three kinds of PFAS chemicals at a total concentration of 12.7 parts per trillion [ppt], well below the EPA’s health advisory threshold of 70 ppt. The test was performed on drinking water that had already been treated for PFAS chemicals.

Shawn Monk, the public affairs superintendent at the National Guard Base, referred questions to the military’s national communications team, which did not return requests for comment.

Mark Kinkade, a spokesperson for the Air Force, would not answer specific questions but said, “We are working closely with state regulators to address drinking water contamination concerns.” 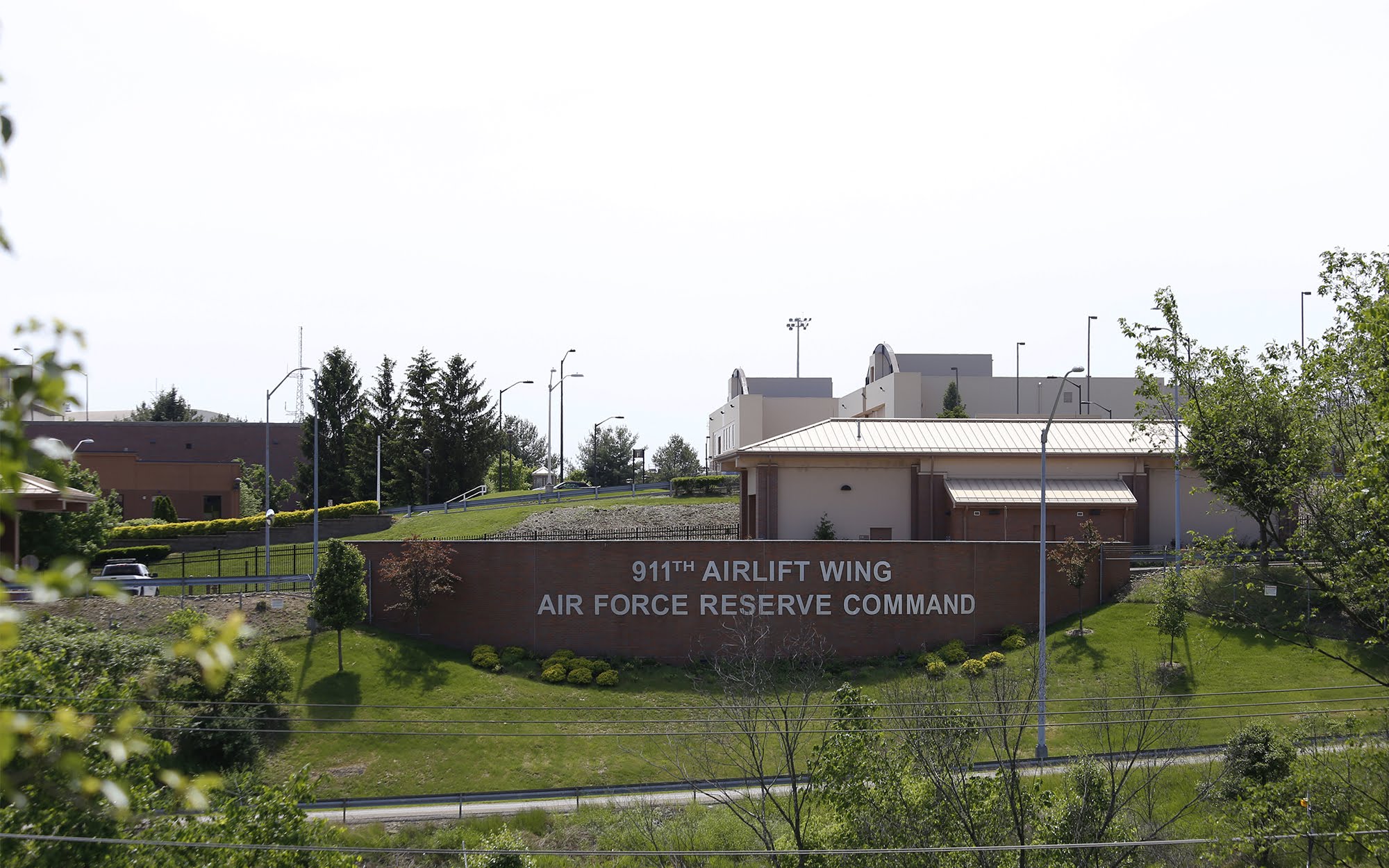 In 1999, a heat detector malfunctioned, causing toxic firefighting foam to spill into a stream near the Pittsburgh Air Reserve Station. (Photo by Ryan Loew/PublicSource)

In September, Gov. Tom Wolf formed a PFAS task force to deal with the toxins.

The DEP is testing 316 of 493 public water sources identified as having the highest risk. The state has $250,000 for testing.

The DEP considered the proximity of water sources to several potential sites of PFAS contamination in Allegheny County, including four airports, six fire training facilities, 15 military sites, more than 20 landfills and dozens of current or former industrial sites that could be sources of contamination.

But the DEP is not saying which public water systems are being tested. Representatives at the MTMA in Moon say they have not been contacted by the state about participating in the state’s testing program.

DEP spokesperson Elizabeth Rementer said the sample testing plan “is not meant to be a definitive survey of all public water systems in Pennsylvania, but a representative sample to determine the prevalence of PFAS chemicals.”

Michigan has required testing at nearly 1,000 drinking water sources and found the drinking water of more than a million residents has been contaminated to varying degrees.

John Riley, the general manager of the MTMA, worries that the public is going to get unnecessarily worried about the safety of the drinking water.

Riley doesn’t think the new report showing contamination at the two military bases is a cause for much concern. Riley said the bases are 10 miles downriver from the authority’s source for drinking water. The report, though, points out that the MTMA’s source water is only about 4 miles away from the bases by groundwater.

The bases have been contaminated for many years, Riley said, meaning any contamination likely would have already shown up in testing. 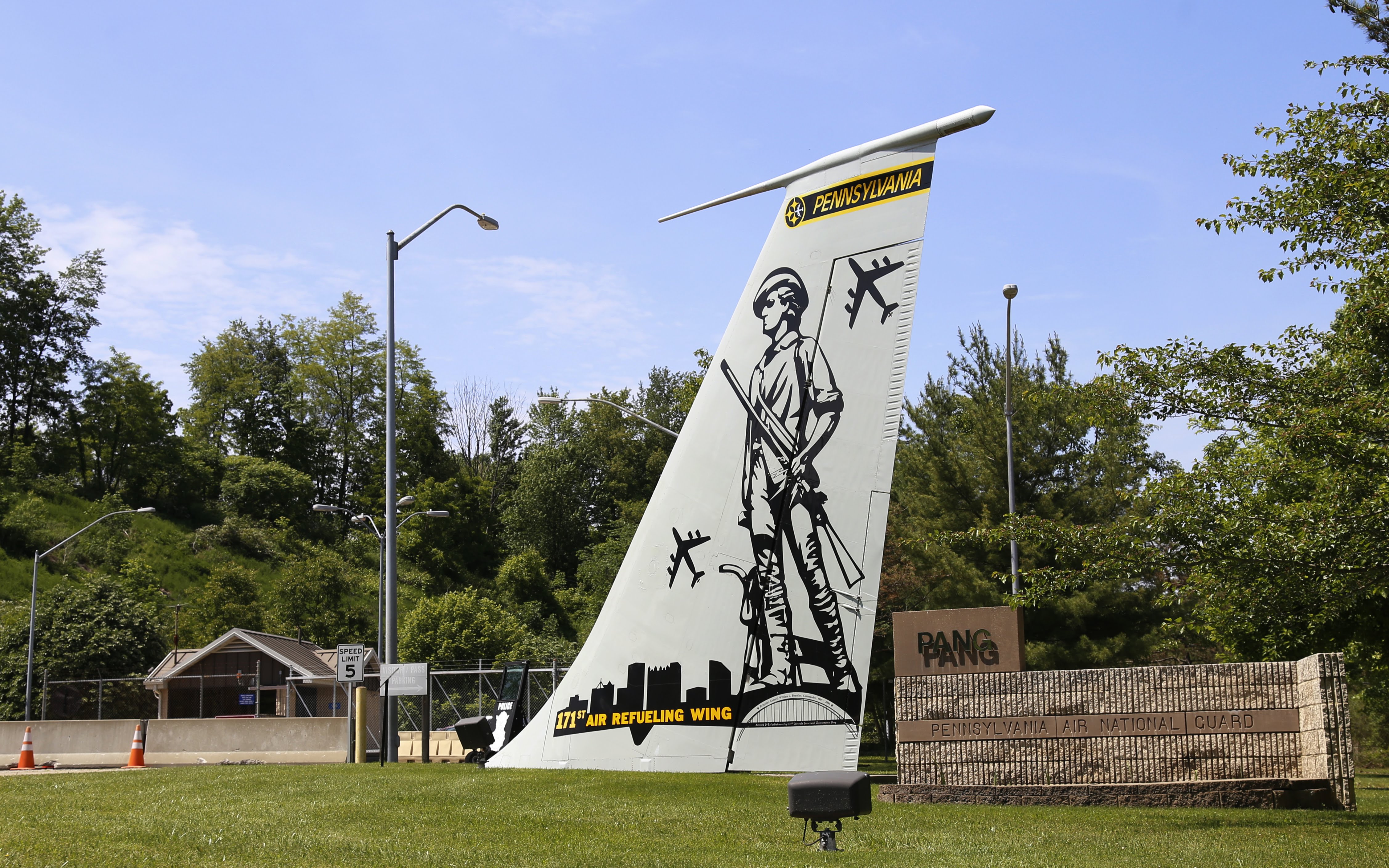 In 2013, a faulty switch at the Pittsburgh Air National Guard Base led to more than 400 gallons of toxic firefighting foam releasing into a nearby stream. That stream feeds into Montour Run, where trout fishing is common. (Photo by Ryan Loew/PublicSource)

"This is a very old source, and it’s far away from our supply and any influence from it would be tremendously diluted by the Ohio River,” he said.

The authority tested its drinking water after it applied carbon filtration, which removes PFAS chemicals, but has not tested the source of its drinking water directly for PFAS contamination, according to Riley. The authority installed a second kind of carbon filtration in 2003 to remove other kinds of organic contamination but that filtration also removes PFAS chemicals.

The contamination has “likely” spread off base, according to the report.

It’s not yet clear how much PFAS contamination may be in the MTMA’s source water before carbon filtration.

“We were never asked to test the raw/untreated water for PFAS chemicals,” Riley wrote in an email.

The biggest source of exposure to PFAS contamination is typically through drinking water sources, said Dave Andrews, a scientist who studies PFAS for the nonprofit Environmental Working Group.

Christopher Higgins, a civil and environmental engineer at the Colorado School of Mines who studies PFAS contamination, said he thinks the authority should test its untreated water. Carbon filtration systems have to be maintained correctly to prevent PFAS contamination.

Moon doesn’t regularly test for PFAS. The Pittsburgh Water and Sewer Authority, by contrast, says it tests its drinking water twice a year for PFAS chemicals. Its tests have not shown contamination that exceeds the EPA’s health advisory limit.

“We may do testing again,” Riley said, “just to make sure that our customers can be confident in the quality of the water that is provided to them.”

According to Higgins, one of the great risks of PFAS chemicals is that they don’t become any safer over time. That’s why they are sometimes referred to as “forever chemicals.”

"If there is a plume headed in their direction, for all I know, it could ‘arrive' next year, 50 years from now or never…” he said. "The issue is that the chemicals will still very likely be in the groundwater 100 years from now unless someone cleans them up.”

Threat to nearby streams and fish

While it isn’t clear how far off base the PFAS contamination has spread, Higgins said the chemicals often follow the path where water travels.

“So what that means is that if there is any contaminated groundwater discharged to a stream, which there often are, the streams could be contaminated,” he said.

The contamination report noted several instances since the 1990s when toxic firefighting foam was reported to be floating on top of nearby streams after major spills. State agencies reported at the time that they didn’t notice dead fish from the spills.

“...if there is any contaminated groundwater discharged to a stream, which there often are, the streams could be contaminated.”

But Higgins said the problem with PFAS chemicals isn’t that they kill fish, but that they contaminate fish tissue. People who eat those fish could be ingesting harmful levels of the toxins.

Two of the streams that received toxic firefighting foam during spills feed into Montour Run. Trout are routinely stocked and fished in Montour Run, according to local officials.

The DEP in Pennsylvania hasn’t tested Montour Run or its tributaries for contamination “because this is a relatively new issue in the area and until recently our lab could not analyze for PFAS,” according to Rementer of the DEP.

Michigan, Minnesota and New Jersey have all set advisory limits for how many fish of particular species and sizes people should eat from water with substantial PFAS contamination.

“It would be nice to know that the DEP is going to respond to that to do [PFAS] testing to protect people and wildlife alike from potential contamination,” Brady said.

The Allegheny County Airport Authority has a fire training facility closer than 1.5 miles northwest of Chromack’s home. Scientists who study PFAS say the facility could be another source of contamination.

Bob Kerlik, the vice president of media relations, wrote in an email that the authority now uses a safe firefighting foam and implements procedures that minimize the chances the foam could contaminate the surrounding environment. 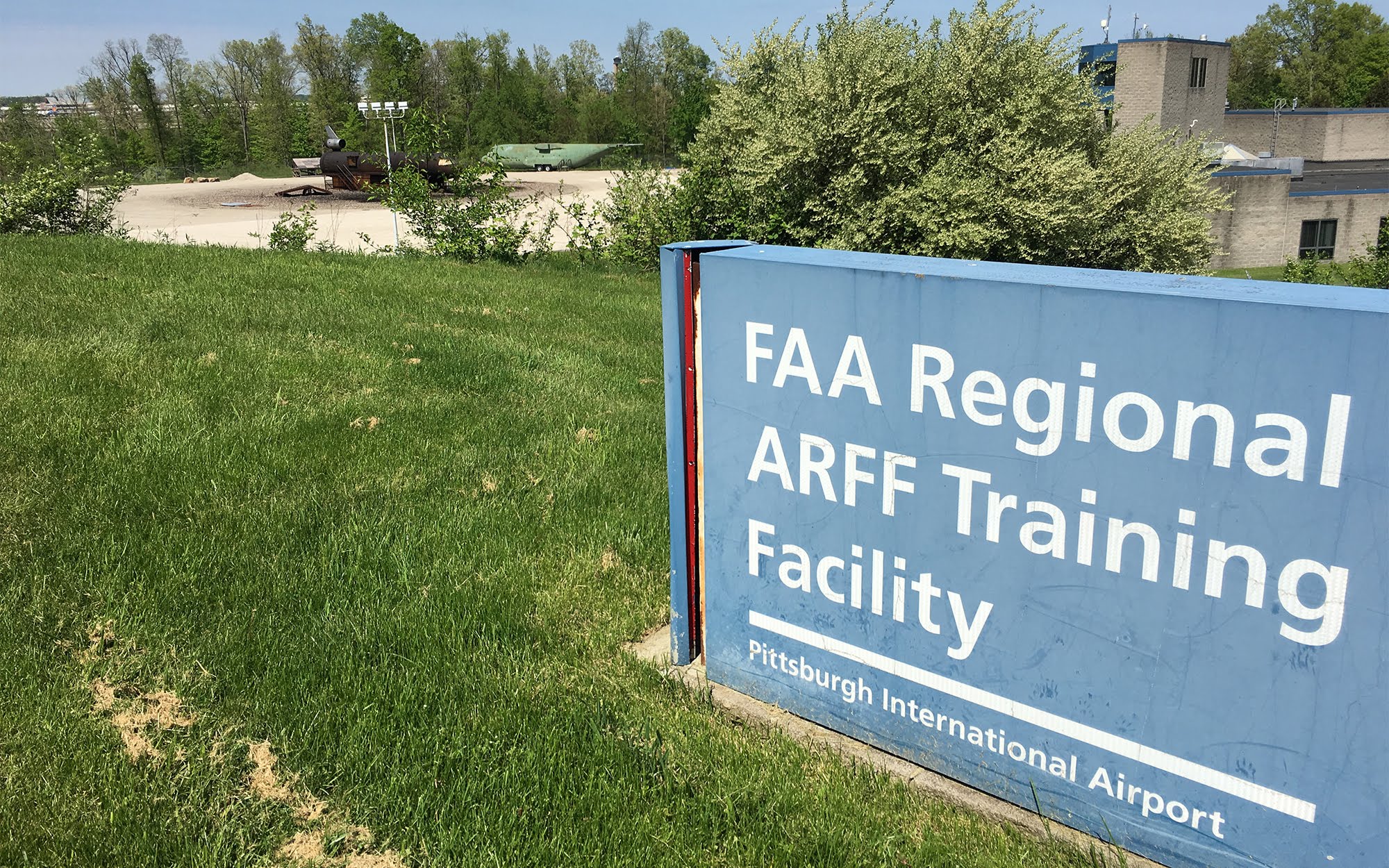 PFAS contamination can occur in places where firefighting foam containing the chemicals was used. (Photo by Oliver Morrison/PublicSource)

Kerlik didn’t answer questions about whether and to what extent the airport used toxic firefighting foam in the past. The authority is aware of the PFAS contamination at fire training facilities nationally, Kerlik wrote, but it hasn’t tested for it.

Higgins said he would almost be willing to bet his house that testing would show contamination.