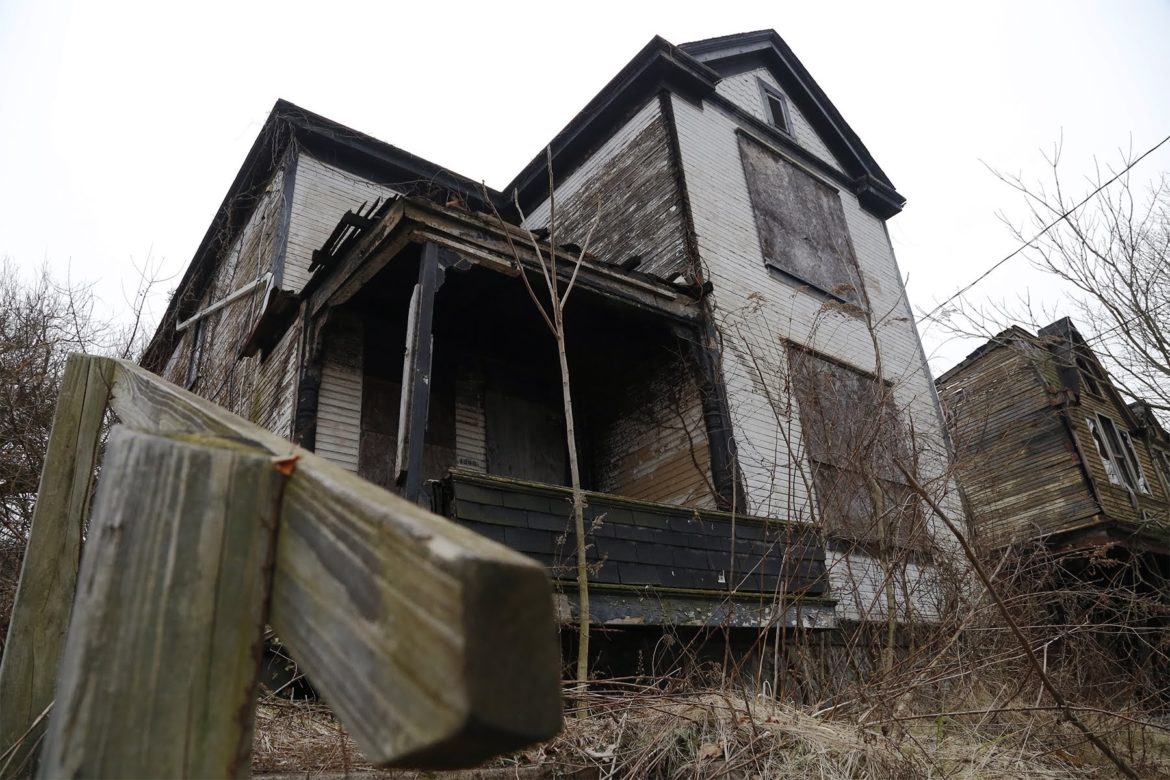 A vacant home on Franklin Avenue in Wilkinsburg. (Photo by Ryan Loew/PublicSource)

Update (4/7/20): Allegheny County Council Tuesday unanimously approved a measure placing a $15 fee on deeds and mortgages, to fund demolitions of blighted properties, sending it to County Executive Rich Fitzgerald for his consideration.

Update (4/1/2020): A proposed fee on deeds and mortgages that would fund the demolition of blighted buildings won the recommendation of Allegheny County Council’s Economic Development Committee Wednesday afternoon, setting up a possible vote of the full council on Tuesday.

The seven-member committee, which met via web, voted unanimously to endorse the legislation. Because it creates a new fee, it requires a ⅔ vote of the full 15-member county council to become law. County development Director Lance Chimka projected that it would bring in an average of $2.1 million a year.

“I just believe this is in the best interests of the county overall to basically get this passed,” said Pat Catena, president of council. “It’s not going to be the magic bullet, but it will definitely help some of these struggling communities” with their blight and safety issues.

“It’s almost eerie,” Lisa Ocasio said of her usual bus ride from East Pittsburgh to Downtown, especially the Wilkinsburg stretch. “When I’m riding the bus, I do see a lot of abandoned houses, even churches — very rundown, very vacant.”

The 31-year-old customer service trainee piped up at a March 10 meeting on Wilkinsburg’s vacant properties, telling borough officials: “There’s so many houses in Wilkinsburg, like, together, and they’re so rundown, you can tell that most of them are abandoned, condemned, and it’s a terrifying sight to see.”

Wilkinsburg officials believe the borough has upwards of 700 vacant buildings, and only enough money in the budget to tear down around 16 this year. The borough is so beset by empty houses and commercial buildings that it’s considering a $400,000 investment in demolition equipment, so it can do the work in-house, lowering the cost.

In recent years, Allegheny County has only been able to meet a fraction of the demolition funding requests that pour in from municipalities, mostly in the Mon Valley and eastern suburbs. Prior to a Pittsburgh Post-Gazette report on the issue last year, county officials had not publicly considered a demolition funding solution available under a state law passed in 2016.

County council’s Committee on Economic Development and Housing, though, is considering that potential solution: a $15 fee on deeds and mortgages that could, according to the legislation, raise enough to pay for more than 160 demolitions a year. That committee has scheduled a 4 p.m., Wednesday, April 1 meeting on the legislation — postponed from March 18 due to the novel coronavirus crisis — and could discuss and vote to recommend it at that time.

“Having additional funding for demolition activities is a very important first step" toward revitalization, said An Lewis, executive director of the Steel Rivers Council of Governments, which assists 19 Mon Valley municipalities. “These buildings have to come down.”

The concept got a warm reception at the Wilkinsburg meeting, hosted at borough headquarters and led by nonprofits Grounded Strategies and Civically Inc.

“Unfortunately a lot of those properties are beyond saving,” said Wilkinsburg Mayor Marita Garrett, who is also the president of Civically. Some 500 buildings in the borough, she estimated, are beyond repair. But the borough also needs a post-demo plan “so you don’t just have all of these vacant lots.” 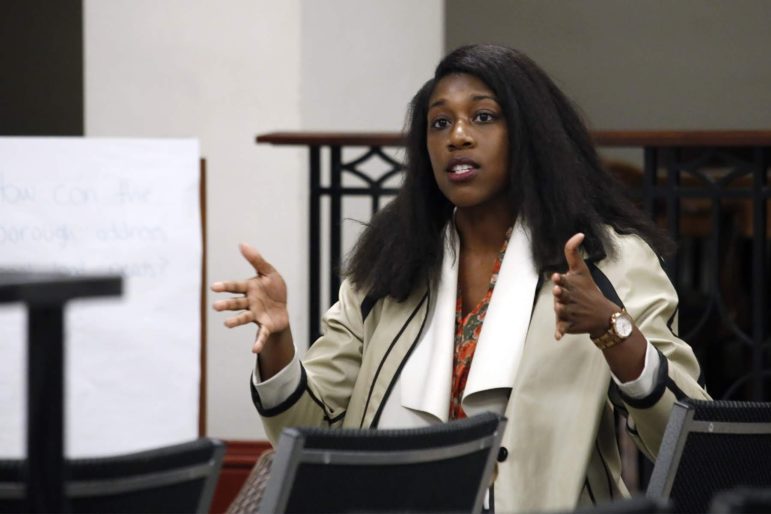 Wilkinsburg Mayor Marita Garrett speaks before a group of people attending a workshop on how the borough handles vacant land and properties. (Photo by Ryan Loew/PublicSource)

County development Director Lance Chimka does not know how many vacant buildings are in Allegheny County, but he knows the problem is “concentrated around the river valleys, with more concentrations within the Mon Valley” and “some of the areas around Penn Hills,” he said, referring to the Allegheny County vacant properties map.

Last year the county funded 31 building demolitions, according to Chimka.

Hard-pressed municipalities turn to the county for help paying for demolitions, which vary widely in cost. (Wilkinsburg officials said they’re paying contractors around $25,000 to raze a given large two-story house.) But federal rules allow counties to put just a fraction of their Community Development Block Grant money toward a host of uses including demolition. So the county says no to the majority of pleas.

Hoping to bridge some of that gap, county Councilman Bob Macey in February proposed that Allegheny join 19 smaller Pennsylvania counties in slapping a fee — capped by state law at $15 — on each deed and mortgage that’s filed, and using the money to fund demolitions.

“There’s safety factors involved" in abandoned buildings, said Macey. "You’ve got people going in there stealing the copper. You’ve got animals coming in there. You also have the fire hazard. So we’re talking about lives, too."

Macey added that trimming the number of empty buildings is a big part of creating "a community that is attractive to newly, maybe married couples, young families."

His legislation suggests that the fee could raise “between $1.9 million and $2.5 million” a year and that could cover the cost of razing “approximately 167 to 200 blighted properties.”

The most recent annual reports filed with the state by the 19 smaller counties suggest that estimate could be overly optimistic. Combined, those counties raised $2.7 million over a year, and used $1.2 million of it to demolish 56 properties. The balance is available for future demolitions.

“If we can do something to raze even a few houses, it would give the people in the neighborhood hope,” said Lisa Franklin-Robinson, a councilwoman in North Braddock, where, by the most conservative estimates, there are some 400 vacant houses. The part of the borough she represents, she said, “looks like it has been involved in a war for the last 10 to 15 years.”

Her one concern with the county legislation: “[W]ill there be an equitable distribution or an equitable access?”

Allegheny County bases its demolition funding decisions largely on the specifics of the building to be razed, rather than on the municipality’s overall level of blight. Chimka said the county is more likely to fund demolition of buildings that:

Less likely to get county backing are proposals to demolish buildings that could conceivably be renovated, or that are just eyesores. 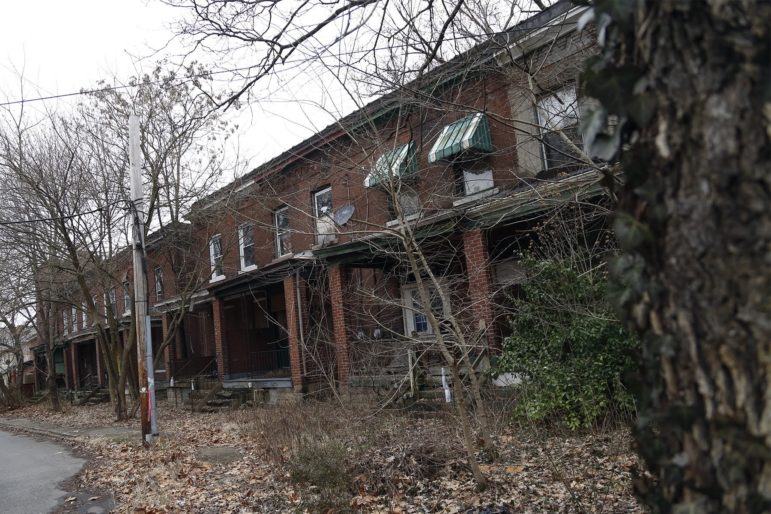 Residents and leaders in Braddock, East Pittsburgh and North Braddock have identified abandoned buildings as their top housing-related concern, said Ashley Cox, an urban designer at evolveEA, an environmental and architecture firm that is helping to craft a joint comprehensive plan for the three boroughs.

East Pittsburgh has reduced its roster of condemned houses to around a half dozen. But during a break in a March 3 community meeting on the plan, Mayor Louis Payne worried aloud that, “We’ll get these six [demolished], and say we’re almost done, but then there’s them 12 [more empty houses] coming up.”

”The situation with some of these demo houses is, the parents, grandparents passed away, OK?” Payne said. “And the house was still in their name. The children moved in there for years after that, and then they moved out.” When the borough pushes them to maintain the properties, he said, the surviving family members say, “‘Go see my grandmother. She’s at Braddock Catholic Cemetery.’”

Payne said his borough is trying to find a way to take ownership of about a dozen empty houses that are still salvageable, and perhaps transferring them to “some good landlords.”

Along with other participants at a community planning event, Jonathan Reyes, East Pittsburgh councilman and arts and culture facilitator at the Braddock Carnegie Library, places stickers on a large sheet prioritizing actions and and others would like to see occur in the boroughs of Braddock, East Pittsburgh and North Braddock. (Photo by Ryan Loew/PublicSource)

Garrett said the first consideration is “what [buildings] can, maybe, be saved.” But most can’t. “OK, how can we reclaim this vacant property? Should we put another structure on there? Should we try to have an agri-hood type thing, like a series of gardens?”

Post-demolition, she said, Wilkinsburg may add some rural flavor to its urban character. “There’s only so much you can build. At some point, you have to work with the land as is, and try to reclaim it to the best of your ability.”

This story was fact-checked by Grace McGinness.