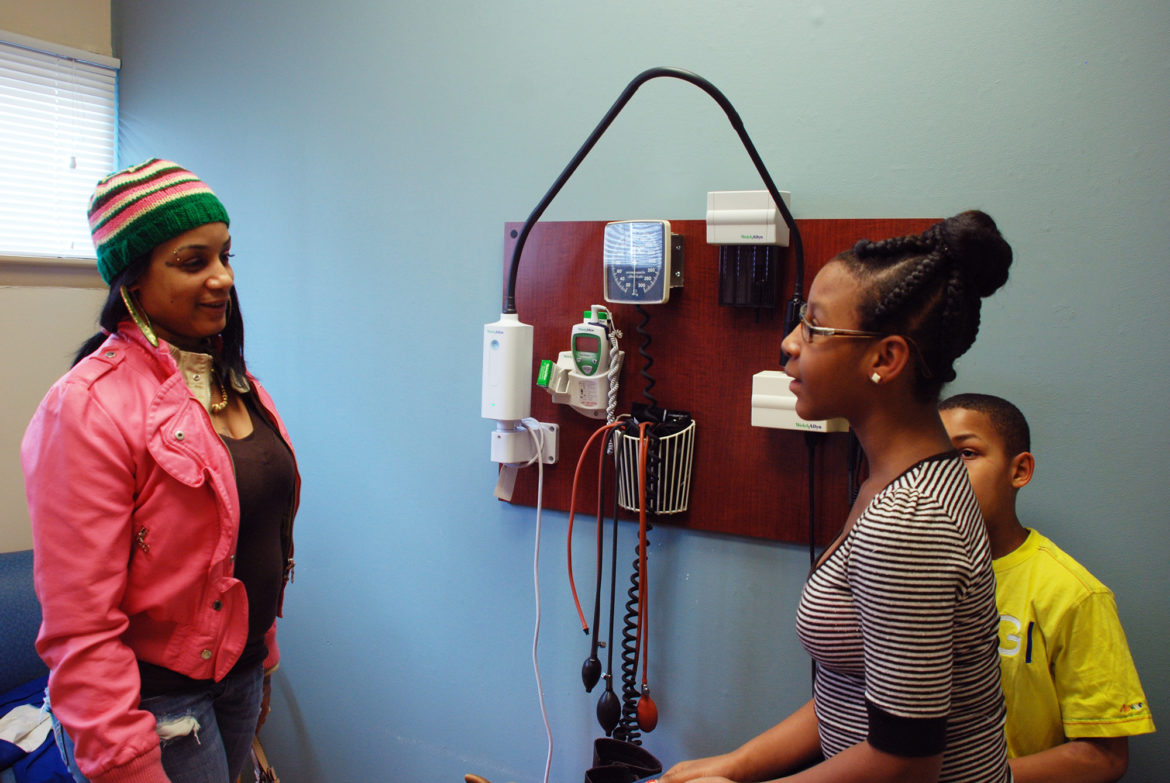 Jomonna Smith listens to her children, 12-year-old Mon'Dayja and 9-year-old Mon'Dae, answer the doctor's questions about school, chores and their health.

She is a single mother of three children, making ends meet with government assistance, styling hair on the side and a bit of family help.

She relies on buses to get around and pays $301 a month to live in a public housing project in Braddock, a borough southeast of Pittsburgh.

But she craves more for herself and her children.

“I don’t want to stay in the projects,” she said. “I’ve been there for about five years now and I feel like it’s time for me to take a step ahead and do bigger things. My children are getting older, you know. It’s time for a change.”

On several levels, Smith represents the life that many blacks and Latinos in Pennsylvania live. The past 50 years have seen an increase in the disparities between minorities and whites on economic and educational progress, according to U.S. Census Bureau figures for the state.

And, in some cases, the gaps are the worst in a half-century.

A PublicSource analysis looked at five U.S. Census Bureau measures --  family income, poverty, high school and college graduation and homeownership -- for blacks, Latinos and whites in Pennsylvania from 1960 to 2010.

The plight of minorities in the state closely parallels trends in the nation, reported by I-News Network in Colorado. The nonprofit website gathered and formatted Census data for all 50 states.

Political and social trends to protect poor and vulnerable populations have slowed in the past few decades, said community leaders and advocates in Pittsburgh. And the overall economic downturn has hurt blacks and Latinos more than whites, they said.

“Wealth is an intergenerational thing, and we’ve started many people off in this country with nothing,” said Lisa Frank of One Pittsburgh, a group formed to address income inequality.

Black and Latino families in Pennsylvania live on meager incomes compared to the white families, and, for many, that means surviving below the poverty line.

In the 2010 Census, blacks made up 11 percent of the state population, and Latinos comprised about 6 percent.

Many of the estimated 17,000 residents of the Hill District -- a primarily black area between downtown Pittsburgh and Oakland -- have service-related jobs. Most of those are part-time and offer few, if any, health or retirement benefits, Redwood said.

“You can’t build wealth,” he said. “You can’t pass on assets to your children like that.”

President Barack Obama proposed in the Feb. 12 State of the Union Address that the minimum wage be raised to $9 by 2015.

Although blacks were long excluded from the highest-paying jobs in steel mills, one person with a steel mill job could support an entire family in the Hill District in the late 1960s and the 1970s, Redwood said.

“It helped families move forward, from being renters to homeowners to providing enough for their children to go to college,” he said. “The better-paying jobs have disappeared. People here are in survival mode.”

Rate of heads of households who own homes in PA

Less than half of the heads of minority households own their homes in Pennsylvania, compared with almost three-quarters of white households.

That basic building block of economic security has eluded people like Smith.

Whites, blacks and Latinos all lost ground in homeownership between the 2000 and 2010 census, during the Great Recession and the real-estate bust.

The downturn hit the minorities hardest, though; in 2010, the homeownership gap between white and black households was the largest over the 50 years of Census figures and the gap between whites and Latinos was the second highest.

“The lower you go down in economic level, a higher proportion of income goes into the house,” said Larry Davis, dean of the University of Pittsburgh School of Social Work.

Rate of people living in poverty

Smith, a former Hill District resident who would like to move back to that area, said she has been searching for a job cleaning houses or styling hair, but each search has reached a dead end.

Side jobs and benefits for her son through Social Security’s Supplemental Security Income program help; her son has attention deficit hyperactivity disorder. The Smith family’s insurance is provided by the state Department of Public Welfare, she said.

“I just live day by day with what I have and what I get until I find a job,” she said.

And for those who can’t find jobs, poverty is a looming threat.

“When the safety net has been respected, when it’s been resilient, strong and generous, we’ve made progress on reducing poverty overall and on reducing the racial gap in poverty,” he said. “We’re moving backward because we’ve surrendered key pieces of the safety net.”

Rate of adults with college degrees in PA

When the working class finds solid ground, families are able to consider such things as owning a home or sending a child to college.

The rising cost of college and languishing support for public education have created fresh obstacles to academic achievement.

Latino and black adults in Pennsylvania graduate from college at about half the rate of the state’s white adults, according to the Census.

The education problems for Latinos start in high school, where 67 percent of its adults graduated -- a 23-point lag from the state’s white adult population.

Yet the gap has narrowed to a 50-year low between blacks and whites graduating from high school.

But the Census does not separate high school diplomas from a General Equivalency Diploma, or GED, said Davis, also the director of the Center on Race and Social Problems at Pitt. He estimates that about a quarter of the blacks with a high school education in Pennsylvania actually earned a GED.

“A GED is an inferior education,” he said. “Even those that do graduate, you have to look at what kind of education they’re getting. Most black schools throughout the nation, the students are not on grade level.”

Jomonna Smith received a GED -- she dropped out of high school when she became pregnant with her daughter -- and she said no one in her immediate family has attended college.

“My education doesn’t have anything to do with what they should do,” she said of her three children in February as the two oldest were undergoing a routine check-up at the federally funded UPMC Matilda Theiss Health Center, where they’ve received health care their whole lives.

The children, who will attend 4th and 7th grades in the Woodland Hills School District next school year, eagerly nodded.

“I want to be a nurse,” said 12-year-old Mon’Dayja, who has already been submitting her phone number online to colleges.

“I want my children to go to college; yes I do. I want the best for them,” Smith said.